Anyone who’s seen enough old Bollywood films knows about fallen women – the nightclub dancer, the tawaif, the gangster’s moll, etc. The deserving among these debased women usually get a leg up into higher strata of society where they get the privilege of wearing vermilion in their hair partings and no longer have to wear the dreaded ghungroo. There seem to be several of these fallen and subsequently uplifted women in Bollywood. But seldom does one come across a similar upliftment of fallen men. Thats what makes this movie so unique – it takes two men out of the kotha (filmi brothel) and makes them respectable! 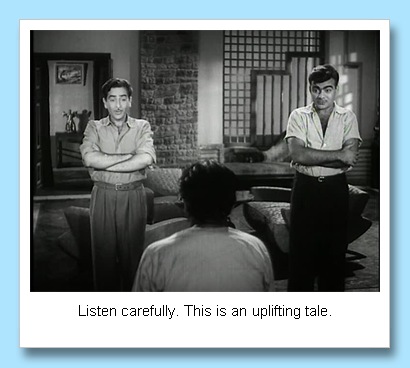 Thakur Jaswant Singh (Nasir Hussain) and his wife Rukmini (Lalita Pawar) are expecting their first-born in late middle age. To avoid any medical problems, they decide against a home birth – a decision that he at least will live to regret for a long time. Before the new-born can be introduced to his parents, disaster in the nursery leads to a mix-up. Jaswant’s son gets mixed up with that of a courtesan who died in childbirth, and nobody knows which kid goes with what mother. After some high drama and a lot of “Thakur!”, “Thakur!!”, Jaswant’s friend, Thakur Harinam Singh (Krishnakant), suggests to Jaswant that he claim both babies. The two can be distinguished at a later date as the courtesan’s son will reveal his origins with time (“blood will out”)! 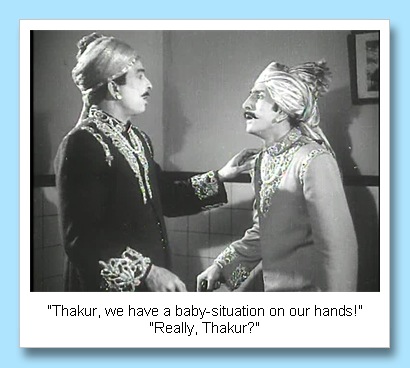 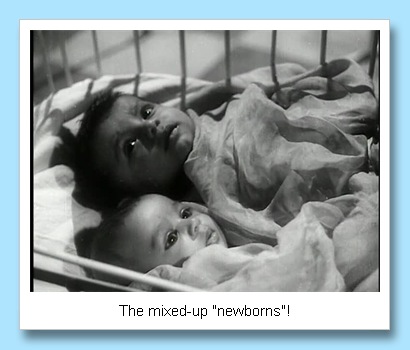 A reluctant Jaswant and Rukmini take home both babies. Also along with them is the dead courtesan’s brother Banke Bihari (Radhakrishan) who happened to be a musician in the kotha – a miraasi (a singer/musician who apparently occupies the same social status as the courtesan). Banke now makes his home with his nephew in Jaswant’s mansion. 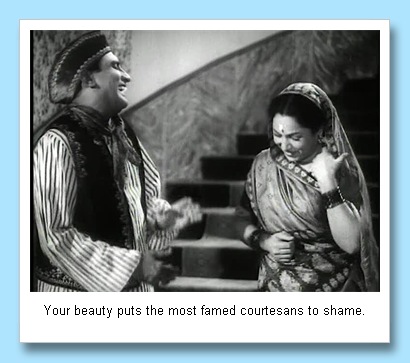 Then begins the endless wait for the “dirty” courtesan blood to show itself. Bringing up the kids, Rukmini gets attached to both children, and so does Banke. Jaswant and Harinam though, are perpetually looking for signs of courtesan-iness – in vain! As the babies grow up, people continue to upbraid Jaswant for fostering a nautch-girl’s kid. After the thousandth such incident has pained Jaswant, Harinam pledges to marry his daughter to Jaswant’s real son who will be known when the lower class kid finally shows his true colors. Soon after, Harinam loses his wife and moves to vilaayat (foreign land – usually England) with his daughter, Asha. 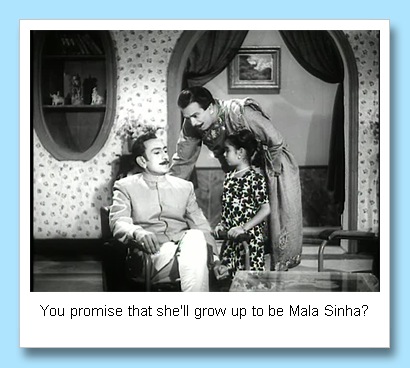 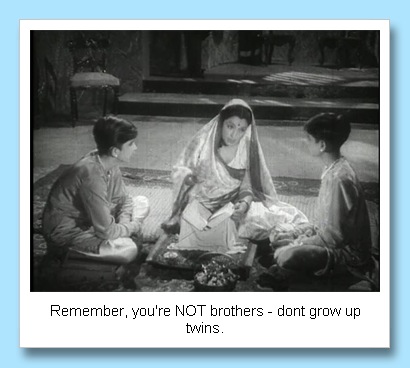 The years fly by, without either kid developing any base characteristics. The two sons grow up into frolicking young men – Raja (Raj Kapoor, of course!) and Ramesh (Mehmood). Their Mom, Rukmini, loves them both dearly and they in turn are very attached to each other and their parents. 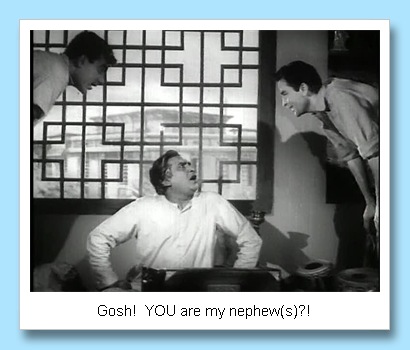 Harinam returns to India with a grown up Asha (Mala Sinha) while Jaswant’s real son is still to reveal himself. A contretemps at Harinam’s welcome home party leads to the nth person (‘n’ here equals infinity, if the film is to be believed!) taunting Jaswant about bringing up a naachnewaali’s son in his house. He comes home and yells at both sons, bemoaning his fate. Thats when Raja decides to take action. Since neither brother is developing any immoral characteristics, he decides that he will display some base characteristics to show himself as the true descendant of the nautch girl and her depraved family. After some argument between the brothers about who will pretend to be the base-born, Raja prevails. 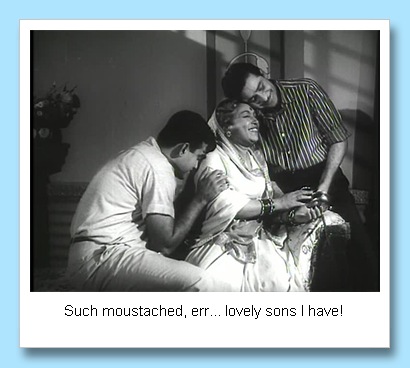 Thus begins Raja’s journey into the despised demi-monde. He steals money from home, drinks and gambles, gets into a fight and lands up in jail. Jaswant is jubilant to finally know who his real son is (the still-good boy Ramesh), while Rukmini is unwilling to believe bad things of either of her sons and is convinced that there is some misunderstanding. Since Jaswant will no longer entertain Raja at home, she instructs Ramesh to send Raja to her house outside the city. Raja is happy to have made his father happy. Then, a chance encounter with Asha leads to mutual love. They do know each other’s names, but are too busy falling in love to introduce each other’s families. When the truth surfaces, Raja is in full sacrifice-for-family mode while Asha is in strong-woman mode - refusing to bow down to familial and societal pressure and intent on marrying Raja. 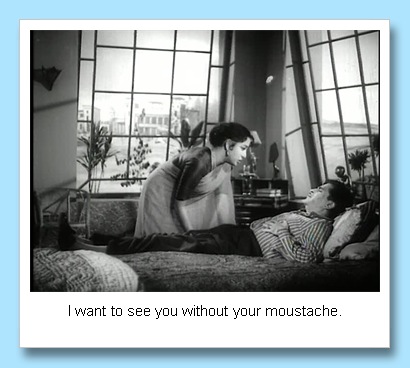 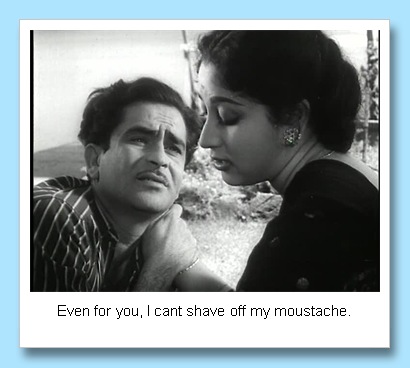 A dramatic blood transfusion later, the men finally wake up to the all-important fact that their womenfolk had always known – that its not birth but upbringing (parvarish) that decides a person’s character! The dramatics and plot development are routine and the endless cycles of taunting-preaching get old very fast. However, there are a couple of things that make this film stand out. The first is that unlike in regular Bollywood films, every character talks to everyone else (whenever possible) and misunderstandings do not persist for longer than a couple of scenes. As one who has frequently wished for this to happen, I am now aware that one must be careful what one wishes for. Every character clearing up every misunderstanding just RUINS a plot! Note to screen-writers – never, NEVER, let characters be frank and open with their loved ones. 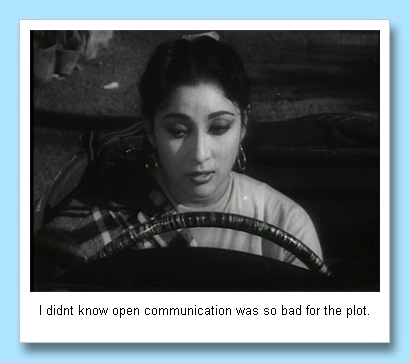 The second, and most remarkable thing, as I mentioned in the beginning of the post, is the upliftment of fallen MEN. No they arent murderers, thieves, libertines or rapists – Bollywood is usually very forgiving to them. Our fallen men are actually people who work in the kotha as musicians – the real dregs of the society. Raja seeks the kotha in his quest to debase himself. Like the courtesan of a typical sad-courtesan drama, he shows Asha his true milieu and begs her to leave him in his filth. His Uncle, Banke, had already spent a lifetime in said filth before his nephew’s unexpected adoption led him into Thakur-ian abodes. Both these fallen men are claimed from their gutterly surroundings and uplifted into respectable society. Has that ever happened before (or after)? The idea that upbringing plays a role in forming a person’s character has been explored in a later Parvarish, too, but not even a Manmohan Desai ever dared to reclaim such fallen men! 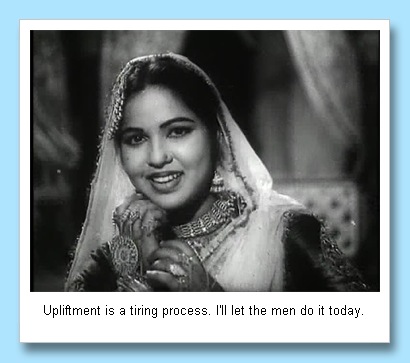 There! That concludes my public-service post. You’ve been informed of the best aspects of this film so you can escape Raj Kapoor’s self-indulgent sacrificing, everybody’s endless preaching, and whack-over-the-head morals. You’ve been WARNED, so watch at your own peril. O and dont forget to check out the songs on youtube – they are lovely. Jhoome re jhoome re, O mama o mama, Beliyaa beliyaa beliyaa, Aansoo bhari hain, Jaane kaisa jadoo kiya and Masti bhara hai samaan, are all lovely.
Posted by Bollyviewer at September 16, 2009