The navrasas (9 emotions) of Rafi 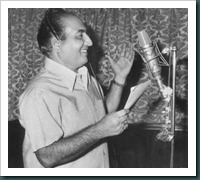 When Dustedoff kicked off a Rafi moods fest in blogland, I knew I had to do a Rafi post, too – not just because I love Rafi, but also because there is so much of lovely Rafi around that a post on his songs is possibly the most challenging thing one can attempt! While his most popular songs may be classified as either romantic or sad songs, it isn’t that easy to classify his expressions in them. He was a superb vocal actor and could bring a range of emotions into the limited time (usually about 3 minutes, back then) a song allowed him. From romantic to sensual, angry to soothing, loving to despairing, or outright joy and laughter, there isn’t a single emotion that his wonderfully fluid voice did not express, and express beautifully. Which begs the question – how does one go about classifying the moods and emotions his voice brought to the screen?
Thanks to Wikipedia (where would I be without it?), ancient India came to the rescue. Classical performing arts in India are traditionally made up of the navrasa - 9 rasas or 9 major emotions/expressions. Eight of these rasas were set forth in the Nātyashāstra (a two thousand years old treatise on the performing arts) while a ninth rasa was added about a thousand years ago, giving us the expression – navrasa (9 rasas). Turns out that there are now a total of 11 rasas and ALL of them go into the making of a good Bollywood masala flick! And guess what - Rafi Saab’s voice has given us a song for every emotion. So without much ado I give you the 11 rasas of Rafi.

Shringar श्रृंगार (love)
Sau baar janam lenge (Ustadon Ke Ustad, 1963)
Rafi certainly was a master at expressing romance and the sheer number of his great romantic songs is a testament to that. Just listen to this haunting romantic number. It starts out slowly – with Rafi’s voice calling out like a Siren to his beloved (if there were a male Siren, this is he!). While she answers the irresistible pull of the magical voice, he brings out the well-worn vows of the romantic, and he makes them sound fresh and timeless. “You and I will be together, even if we need to be re-born a hundred times” - the words came out of Asad Bhopali’s pen, but the emotion is all Rafi and its no wonder that Shakeela is drowning in that voice or that she is startled to see that it came out of Pradeep Kumar!

Hasya हास्य (comedy)
Chhuri ban kaanta ban (Jaali Note, 1960) and Tere poojan ko bhagwan (Shaadi 1962)
Much has been said about Rafi and Johnny Walker and their superb comedic partnership. But Rafi did great comedy for others too – as you can see in these two very different songs where he helps Om Prakash along. The first song expresses some serious sentiments “This world constantly throws up surprises, so, My son, become a knife or a fork, but never a spoon (a euphemism for sycophant)”. But Rafi’s rendition turns what might be a serious examination of worldliness into a straight up comedic number! He takes his time to chew over every syllable, exaggerating every word, and taking such obvious delight in his rendition. The result is a hilarious song. The second song is a humorous parody of a 1935 filmi bhajan (also Tere poojan ko bhagwan). A miser is exhorting his God (money!) to never leave his home, for he will make Him a big bank to live in. Rafi sings it like a serious bhajan with all the devotional fervour that he can summon, and the contrast with the hilarious lyrics and Om Prakash’s on-screen antics just serves to heighten the comedy.
Adbhut अद्भुत (wonder)
Tumne mujhe dekha (Teesri Manzil, 1966)

While most of us are lost in the wonder of his voice, Rafi could be vocally lost in the wonder of discovery in other ways – as this song highlights. "Tumne mujhe dekha hokar meherbaan" (you looked kindly on me) – you can hear the joy and the wonder of a man who, contrary to his expectations, finds himself loved by his beloved. Rafi banks down his vocal energy, playing this as a sweet love-lorn man, just happy to have his love reciprocated, and you can’t but feel for Shammi’s joy. Is it any wonder that Asha Parekh is weeping into her cocktail at having to deliver a heartbreaking-punch – I wouldn’t be able to do that in the face of that golden voice!
Raudra (रौद्र) – anger
Ya meri manzil bata (Rakhi, 1962)

Rafi was especially adept at expressing anger, his voice could slip into the high notes and quick enunciation of the angry man, with extraordinary control and with such great effect - like in O duniya ke rakhwaale which is probably the angriest lament in Bollywood! But the song I’ve chosen here, expresses anger in a more subdued form. Also an angry lament, this one has the fires of anger banked down and smouldering as the protagonist (Ashok Kumar) demands that fate either tell him his goal or take away his life. You can hear the anger get heated in a few places like when Rafi demands “De nahin sakta agar aaram ka ek saans bhi, paaon mere tod de, awaargi ko chheen le (if you cant give even one breath of rest, break my legs and take away my wanderlust).” But it always cools down to a baffled, sad sort of anger with Rafi’s voice-modulation doing a superb job of expressing the emotion, as always.
Veer वीर (heroic)
Kar chale hum fida jan-o-tan saathiyo (Haqeeqat)

This song never ever fails to reduce me to tears! As the camera pans over the dead and the dying on the battlefield of the India-China war, Rafi’s voice rings out clear and pure, exhorting the living on the behalf of the fallen men to take care of the country as “we (the fallen soldiers) have sacrificed our lives and our bodies”. A patriotic song in the heroic vein, it gives voice to the heroic sacrifices of the dead soldiers while managing to bring home the brutality of war, as well! I LOVE how Rafi’s voice quickens with the strength of his emotions and how heroic and sad the high notes sound, and of course, I love the lyrics that seem to release a well-spring of patriotism even in me!
Karuna करुणा (compassion)
Kahan ja raha hai (Seema, 1955)

“Where art thee going, o fleeing one, its dark, enlighten yourself first”. The “fleeing one” in this case is a troubled teen (played by Nutan) who feels the pull of this compassionate voice as he tells her that life is a struggle and the victors are those who fall and get up to struggle again, not ones who never fall. A compassionate understanding of human troubles coats Rafi’s voice as it once again effortlessly brings forth the emotions demanded of it.
Bhayanak भयानक (horror)
Main apne aap se ghabra gaya hoon (Bindiya)

There is no supernatural here, no mythical horrifying creatures, but the horror is no less palpable. Its the horror of a man waking up to his own crimes of omission or commission. He is horrified by himself and wants nothing but the oblivion of madness. Rafi plays it with restraint, letting the lyrics and the emotions of his voice speak out the horror and self-disgust. If I weren’t already sold on Rafi’s voice, there is the added incentive of seeing Balraj Sahni acting the horror-struck man onscreen (I do wonder why his acting is so uncharacteristically over-the-top, though) – a double whammy of favourites, in fact!

Can one think of any other song that exemplifies disgust so well? “This world of glitter and privileges and suffocating rituals, so what if one does get it?!” The powerful lyrics are Sahir Ludhianvi’s, but the voice and the emotion? Its all Rafi. What can I possibly say about this priceless gem of a song? Let the song speak for itself, and for a poet’s disgust with a worthless materialistic world.
Shant शांत (peace)
Basti basti parvat parvat (Railway Platform, 1955)

This song is sung in the voice of one who accepts the world as it is and is at peace with himself. The injustices, the quirks, the strange ways of the world - he sees them all, he marvels at the vagaries of human nature, but seems remarkably untroubled by everything. For all the searing indictment of human nature that the lyrics call for, its a remarkably quiet song with Rafi’s voice channelling the peaceful observer, without an ounce of the drama he normally brings to his singing.

Parental love is usually the province of women in Bollywood. So while you can find a ton of mother-child songs in Hindi films, coming up with one sung by the male of the species is rather rare. Naturally, rare or not, Rafi has his share of parental-love songs! The most famous is, of course, Babul ki duaayein leti ja – a quintessential bidai song. But I must admit that I much prefer O nanhe se farishtey – perhaps because it sounds so heart-warmingly sincere, perhaps because it is very emotional without being weepy, or perhaps because it played a lot on TV in my childhood. Whatever the reason, you must admit that Rafi Saab’s voice makes a darned good parent!
Bhakti भक्ति (spiritual devotion)
Duniya na bhaaye (Basant Bahar, 1956)

As usual, there is a lot of material to choose from. Rafi has some superb bhajans, the most famous of them picturised on Bharat Bhushan (as this one is)! Like all classical-based songs, it starts out slow with a short alaap and a slow tempo that quickens pretty soon. The best part is, of course, Rafi’s voice. He starts out pleading for a place in God’s feet, since he does not like the world (is it because he – Bharat Bhushan onscreen – is being pursued by a demented Nimmi?), and soon the voice is soaring in an ecstasy of devotional fervour, with, of course, perfect control on the higher notes.
I bet you all have your own favourites to contribute to each of the 11 rasas – thats the beauty of Rafi, there is soooooo much to choose from! So, tell me all about the great songs that I’ve missed or neglected to mention.
Posted by Bollyviewer at June 11, 2010