The A-Z of Mohammed Rafi 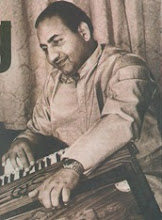 Think old Hindi songs and you think of Rafi’s voice! For over three decades, he was the singing voice of generations of heroes. His melodious voice could soar into high notes for a passionate song or dip down into the low notes for a ghazal, adapt itself equally well to a qawwali, a classical song, a Rock-n-Roll number, or a bhajan. It wasn't just his vocal range and melodious voice that made him such a popular singer. There was also that elusive quality – Charisma with a capital C - in his voice (a quality that onscreen stars had cause to be grateful for!). And then of course, as Filmi Girl points in her awesome podcast, he was also a consummate actor. He could make you laugh and cry, tug on your heartstrings, make you feel blue, or ready to dance. 29 years after his death, his voice is still fresh and charismatic as ever!