Double-trouble or twice as nice? My favorite Bollywood-double roles

Writers elsewhere have noted that the double role not only allows the audience to have twice as much of their favorite star in one film, it also saves the producer money by getting one actor to play two characters for the price of one! As far as I am concerned though, double roles usually mean double the fun and/or double the style. Since double roles come in all flavors and shapes, I have arranged my favorite double roles according to the specific genres they fall into. And here they are for your reading pleasure. 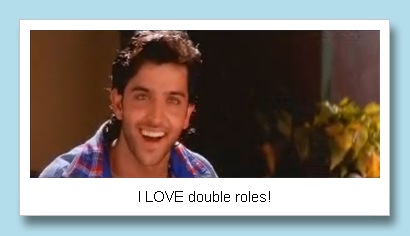 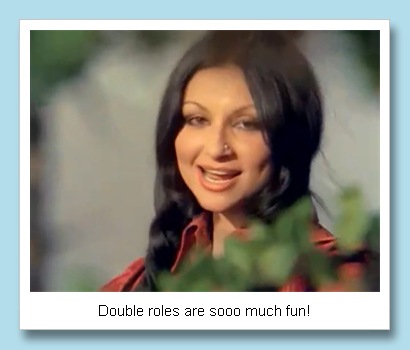 The “twins separated at birth” double roles
Separation of twins is a widespread practice across cultures, which is why film-makers tend to take this phenomenon so seriously. There are just so many ways for twins to be separated (lost in a fair or a storm, carried away by a vengeful villain, stolen by a childless couple, etc.) that I am surprised that there are any un-separated twins in this world, at all!
Angoor: This is double role times two – two Sanjeev Kumars and two Deven Varmas. AND it is twice as much fun as one double role! It doesnt get any better than this. Based on Shakespeare’s Comedy of Errors, this Gulzar film has to be the funniest double role ever and is one of my favorite comedies. 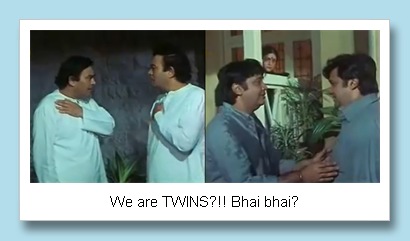 Seeta Aur Geeta: One twin gets to be downtrodden Cinderella in her own home, while the other twin has fun with her gypsy foster-family. Hema Malini kicks some serious ass AND has a skate off with Sanjeev Kumar. Plus, she gets Garam Dharam to round off the hero stakes. Hema gets it ALL, and we have fun all the way! 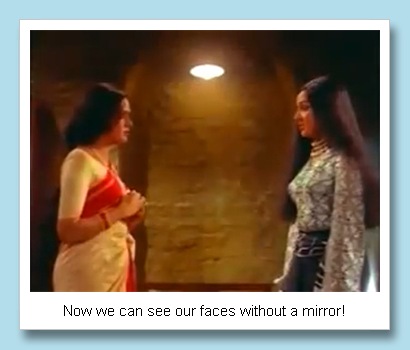 The “twins NOT separated at birth” double roles
I wonder what is worse, being separated from your twin at birth and waiting for the re-union, or always knowing that you will be separated as adults and there may/may not be a re-union?
Sharmelee: The best thing about the two Rakhees here are their fabulous fashions! Unfortunately, the more fashionable Rakhee comes a cropper – like most stylish women in Hindi films do – and lands up with the bad men. So the sarees win the day (AND Shashi Kapoor)! 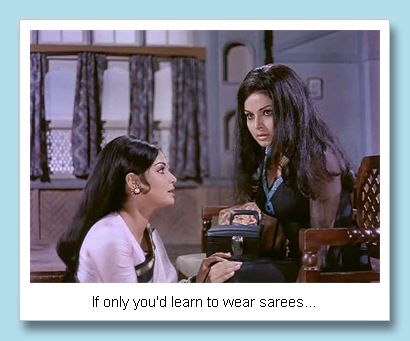 Andaz Apna Apna: Evil twin and good twin (Paresh Rawal), were separated sometime in their adulthood by the cruel LAW - the evil twin went to jail and the good one went to vilaayat. But the evil twin couldnt be in jail and the good one in vilaayat all the time - else how would the two cause hilarious confusion and mayhem? Another of my favorite comedies, this one uses the double role to make fun of double roles - and does it so well.

The “random look-alikes” double roles
Now this is my favorite category ever. I am always on the look out for my look-alike, and when I do find her, we will make our own film. In the meantime, I can enjoy other people’s look-alike tales.
Hum Dono: Two Dev Anands for the price of one! How can that be a bad thing? It cant, not by my reckoning. However, Dev Sahib’s stand point is somewhat different. He has to minister to his dead comrade (also Dev Anand)’s not so dead wife (Nanda) and Mom (Lalita Pawar) and his own girl friend (Sadhana) who waits patiently at home for him. If that isnt complicated enough, his dead comrade turns up alive! Worry not, Dev Sahib, I am sure everything will come out right at the end. 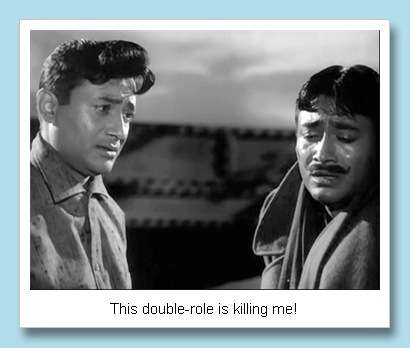 Satte Pe Satta: Bollywood added its own fabulous masala to Seven Brides For Seven Brothers and came up with this fun-flick. There is the clueless Ravi (Amitabh Bachchan) - brother to six strapping men. And then there is the light-eyed Babu (also Big B) – brother to none and a killer to boot. Of course, Babu’s killer instincts cant stand out against Hema’s wifely-devotion to her hubby, or Ranjeeta’s helplessness – so all ends happily, after an entertaining 2+ hours!

Humsaya: Reality is stranger than fiction, as Joy Mukherjee discovers when he goes to China. He runs into a Chinese look-alike! He then gets mixed up with a plot to spy on India, and a beautiful Chinese woman – his look-alike’s wife (Mala Sinha). And all the poor man wanted was to get back to his ex-girlfriend (Sharmila Tagore). He does get back his girl friend, though not before we have a great time watching all the action and songs, not to mention all the beautiful people! 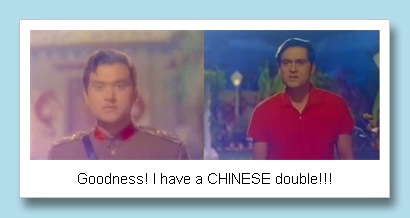 Kaho Na Pyar Hai: Sonia (Amisha Patel) loses her lovely boy friend Rohit (Hrithik Roshan) and goes all the way to New Zealand to grieve. But guess what, all is not lost. There is another Hrithik in store for her, one who dances beautifully, too! Now, wouldnt YOU love to know that there are more Hrithiks where the first one came from? I certainly do!

The “same face runs in the family” double roles
When one character has to die, the first law of conservation of actors dictates that the same actor be brought back as a son/daughter/descendant and I whole-heartedly approve. Why lose out on a favorite star just because the script demands a death?
Mausam: A young girl (Sharmila Tagore) has a summer romance with a visiting doctor (Sanjeev Kumar), who returns years later to find his love dead and her daughter (also Sharmila Tagore) working as a prostitute. His attempts at reparation for deserting the Mom by taking care of the daughter, lead to some interesting results in this unusual story, which is more popular for its lovely songs – Dil dhoondta hai and Chhadi re chhadi. 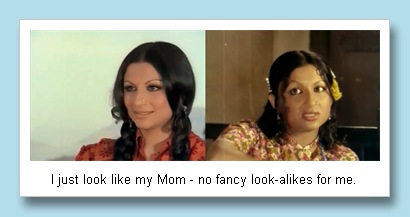 The faux double-role
This had to happen. With so many doubles around, the non-doubled people might feel neglected. Some might even invent a fictitious twin/look-alike. Though its hard to sustain a faux-double role, Bollywood actors can do anything, and certainly do not lag behind in this field.
Golmaal: The hero (Amol Palekar) in this film doesnt feel the need to invent an identical twin out of a desire to have a doppelganger. Its all the fault of a cricket match. No wait, its the fault of a tyrannical boss (Utpal Dutt) who goes to watch a cricket match that he shouldnt have. Anyhow, our hero is forced to invent an identical twin and then sustain the double role, at great personal peril, for the rest of the film. I am sure everyone who’s laughed at poor Ram Prasad’s (Amol Palekar) trials and tribulations, appreciates the difficulties inherent in a faux-double role. I certainly wont try it! 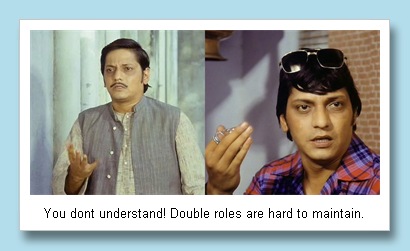 So, these are my favorite double-roles. What are yours?