Fellow film-addict Virginia suggested this film, to go with Jahan Pyar Miley as a double feature. And she was sooooo right. This one is freakily similar to JPM, right down to this:

Unlike JPM, this one doesnt try to tackle weighty issues (amnesia to solve India’s communal tensions!). Instead, it sticks to examining an amnesiac’s trials and tribulations with deadpan humor – an approach that JPM would have done well to emulate! 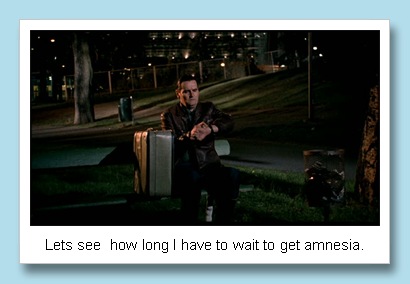 We see our hero (Markku Peltola) alight from the train in Helsinki and rest for a bit on a park bench. His short nap is interrupted by three hoodlums who proceed to beat him senseless and leave him unconscious after rifling through his possessions. A badly wounded and bleeding M (we’ll call him that since we dont know his name and the summary at the back of the DVD cover calls him that) manages to stumble into a washroom and collapses on the floor. 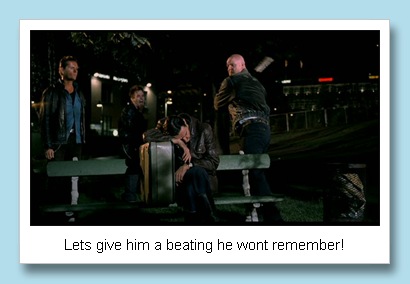 Emergency services are summoned and an unconscious M is rushed to the hospital. The high drama co-efficient of the next few scenes can rival the best of Bollywood melodrama: The doctors work hard on M but are unable to save him. The nurse covers M’s dead body with a sheet and leaves the room. After a dead silence for a couple of seconds, the dead body suddenly throws back the sheet and sits up! For a minute there, I thought I had got a supernatural thriller by mistake! Whether its a malfunction in the vital-signs monitoring system or an erroneous diagnosis by the doctor, the film never explains. We do get a resurrected, though highly bandaged M, who gets out of the hospital and takes it easy by the water front. 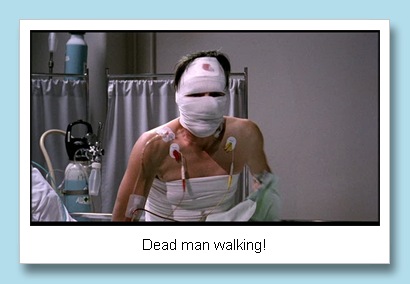 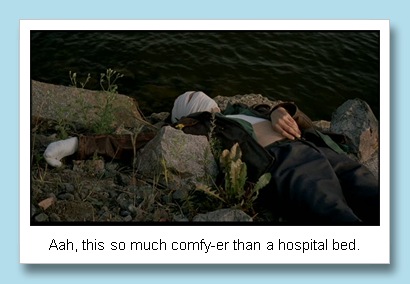 A kindly family, living in a waterside shack, takes him in and cares for him. When questioned by them - Kaisa (Kaija Pakarinen) and Nieminen (Juhani Niemelä) – it turns out that he has lost his memory and doesnt remember who he is! Nieminen tries to help M regain his memory: 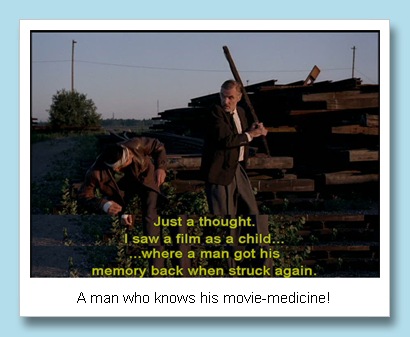 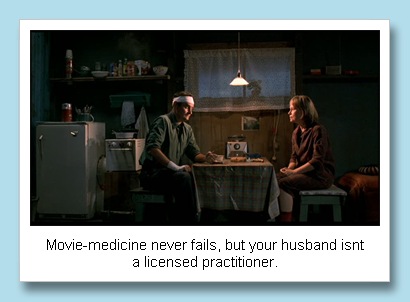 When Nieminen isnt able to hit M, he decides to help the latter get back on his feet. He introduces M to a hilariously bent cop Anttila (Sakari Kuosmanen) and his “ferocious” rent-collector dog Hannibal. M rents an abandoned river-side shack from Anttila and Hannibal is left with him to ensure prompt payment of the rent. The rent paid, Hannibal refuses to go back to her owner (who didnt even realise Hannibal was “she”, not “he”)! 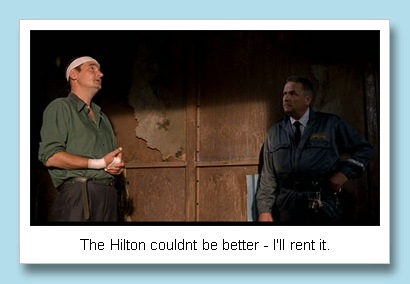 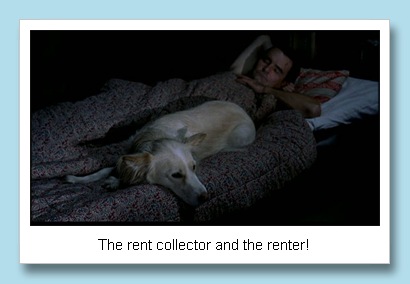 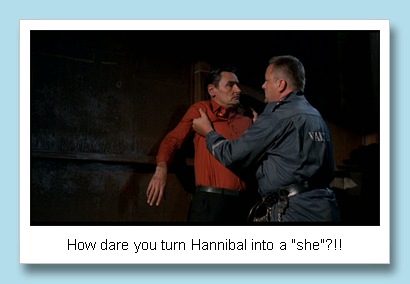 Nieminen and Hannibal arent the only ones kind to M. A kindly soul at the Salvation Army - Irma (Kati Outinen) - also lends a helping hand. She helps him outfit himself in a natty suit and tie and gets him a job with the outfit, too. Though why he needs a suit and tie to lift and carry junk on the water side, beats me! 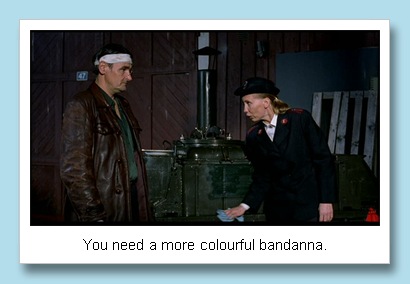 Irma and M are soon involved in a sweet romance, with him burning steaks for her dinner, and her offering to help. Things are proceeding very smoothly on other fronts as well. He helps the Salvation Army musicians try out old Rock-n-Roll numbers to attract more people to the outfit’s concerts, and is well on the way to becoming an impresario! 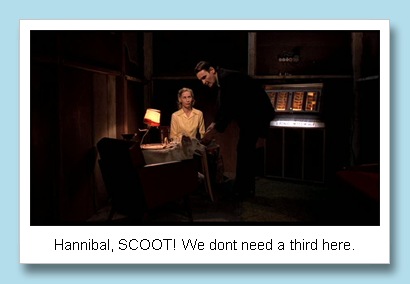 M also discovers that he can do metal-work and is promptly hired for the job. Unfortunately for him, this proves to be his downfall. He cant be put on a payroll without a name and a bank account. He goes to the bank to open an account, but gets embroiled in a bank robbery! 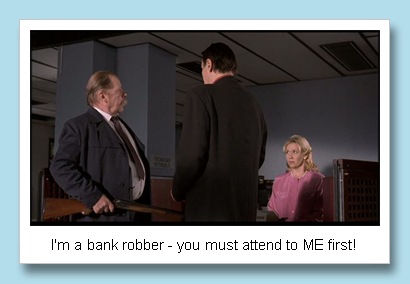 But that isnt the end of M’s troubles. He escapes from the aftermath of the robbery, only to be embroiled with the LAW. They take exception to his loss of identity and contend that he could be an illegal immigrant. The poor man lands in jail for forgetting his name! 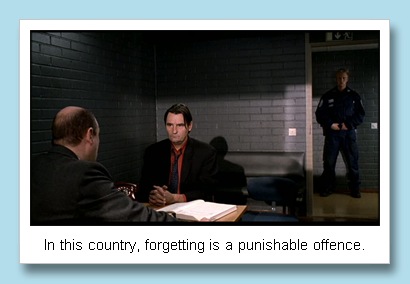 “Hilarious” is apparently what the New York Times called this film. Though I cant say I was infected by a stitch-in-the-side while watching, it certainly appealed to my sense of the ridiculous. M’s trials and tribulations caused by a lack of name were pretty funny, and the film milked them for all their worth. 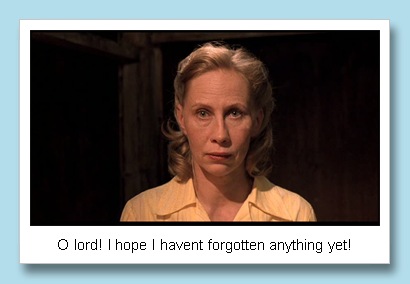 Markku Peltola struck me as being a tad too expressionless and Kati Outinen too exaggeratedly deadpan. Only Juhani Niemelä’s hen-pecked Nieminen and Sakari Kuosmanen’s bent cop seemed to strike the right notes for a comedy - I wish there’d been more of those two. There was a great supporting cast though, and I particularly liked the bank robber (Esko Nikkari), the snarky police detective (Pertti Sveholm) and the lawyer who got M out of jail (Matti Wuori). I was also surprised to see several songs, some in English even (one sounded like an old Elvis number!). 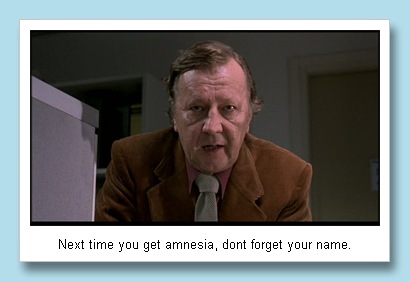 I’d call this film more of a satire than a comedy. Whatever its genre though, its a sweet little film and well worth the 97 minutes I spent on it.
Thanks for the recommendation, Virginia!
Posted by Bollyviewer at September 03, 2009