Before intermission, the vilaayti twin Shyam (Shashi Kapoor) was romancing Dhanno (Tanuja) and the desi twin Gopal (also Shashi Kapoor) had just left a drunk Kamini (Sharmila Tagore), to go to Kashmir to figure out why everybody was mysteriously interested in his maternal relative. I must warn you that this is a very looong post (with spoilers), since I’ve had compress the entire second half of the film in one post. For lack of space, I’ve had to concentrate on the main plot and neglect such delights as Helen trying to seduce Mr. Mehra (Shammi Kapoor), Dwarka (Pran, now Dilawar in Pakistani Intelligence) being smuggled into India, Shalu (Bindu) and her hubby Dheeraj (Ranjeet) sharing a cute romantic interlude in the police station where they’re both police officers, etc. 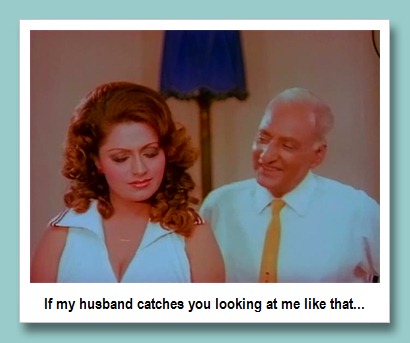 Gopal gets to his address in Kashmir, which turns out to be a cottage, perched dangerously high on a lonely hill top. His presence there is a signal for three battle tanks to come roaring at the cottage. Trapped between the battle tanks in front of him, and a sheer drop of several hundred feet behind him, he does what any intelligent man would do. He reaches into his theatrical pockets to fish out several hair pins (he uses them to secure his larger wigs, of course!), and throws them into the flat-linked chains of the moving tanks. Naturally, the chains get all entangled and the tanks are stalled. 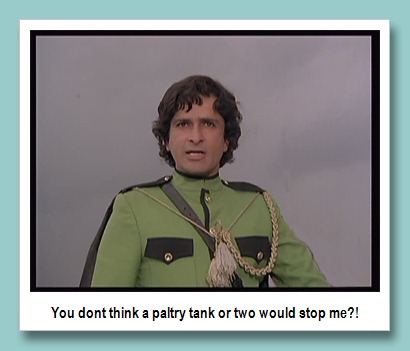 I was all praise for Gopal’s brilliant manoeuvre and the brain behind it. “That scene cost MD very dear. The army protested that the film seriously endangered national security, and the Censor Board used that excuse to prevent its release.” I could understand their concerns. If it got about that Indian tanks could be stopped so easily, we’d be overrun by invaders. But Filmi-eye pooh-poohed my suggestion. “You think its not a well known military “secret”? Who do you think told MD this trick? No, the real reason was something else.” But I’ll tell you that later…
Gopal realises that Kamini set him up – and starts back to demand an explanation from her. He manages to catch her, just as she is about to clear out from her house. He is able to utilise his theatrical training to thunder at her. Before Kamini can reply, Mr. Suri (Mehmood) comes in through the back door and explains all. She and he are actually secret agents, working for the Indian government. A year ago, they heard about some top secret British documents that had gone missing in India. It was a secret plan to destabilise the country, so the Brits could re-possess their empire. The plan was concocted in Singapore, with the help of the BOSS (masked figure soon to appear). The documents were secreted into a MAA statuette (the Masala Awesome Awards statuette), which went missing in India, on its way to UK. 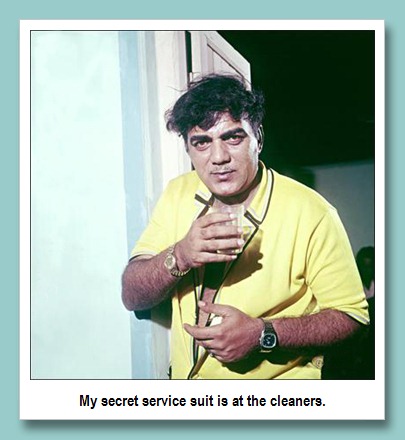 The Indian intelligence heard of it from a double agent, and began looking for it. The Pakistani secret service sent Dilawar Khan (Pran! he used to be Dwarka – Gopal/Shyam’s father) to India on its track. Boss’s men were desperately looking for it. Things were getting hectic when Kamini was able to infiltrate the Boss’s organisation, and become his girl friend. (Clearly nothing wrong with his eye-sight – mask or no mask!)
We see through Kamini’s flashback that the Boss lives on the far side of the Moon, in a stupendously well-designed lair. From there, he keeps in regular radio and saucer contact with his base in Singapore. Kamini is flown to his lair every month, for a few days. Boss’s favorite method of getting rid of his enemies and treacherous associates is to shoot them into space, in a distant orbit. Kamini is terrified of Boss (she suspects that hideous things lurk behind the mask and his sibilant whispers), and is only able to bear his err… close proximity… by closing her eyes and thinking of India. 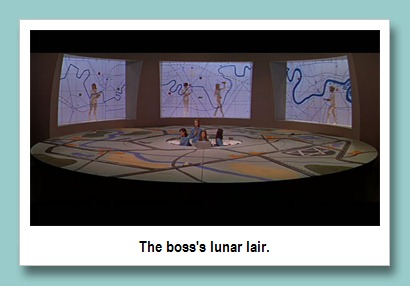 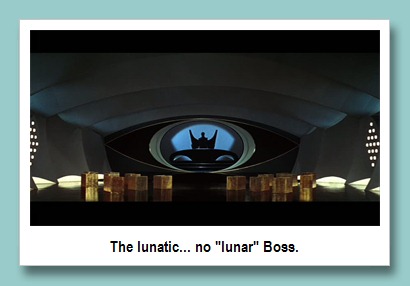 Boss sent her to England to trace the MAA, because the missing agent’s contact in UK may know something.
Kamini: Gopal, when I saw you muttering brokenly about MAA, I KNEW I’d found the right person. And thankfully, you decided to come to India yourself…
Gopal: You saw ME in England? I’ve never been there!
Kamini (nodding wisely): I’ve seen movies like that. He must be your look-alike.
Gopal (all excited): You mean I have a double role in your life? 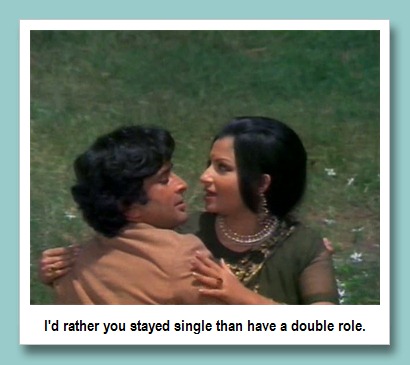 Gopal then goes on to tell them about his lost twin, and they realise that the English MAA-keeper must be Bunty. But where is Bunty, now?
He is busily looking for Maa all over the place. He and Dhanno are singing Maa’s favorite bhajan, everywhere they go. They’re soon arrested for the raucous noise they cause. (Hmm… I wouldnt have thought that a Lata-Kishore’s number calls for an arrest!) They’re brought before Inspectors Shalu and Dheeraj, and Shyam immediately recognises his Maa’s face in Shalu. Shalu thinks its Gopal but is overjoyed to know that its her Gopal Bhaiya’s Bunty. They go home to Gopal, only to find the place in disarray and Superintendent Dev (Ifthekar) inquiring into Maa’s kidnapping. Dheeraj and Shyam follow some ruffians hanging about the house – and discover that Maa has been taken to the Moon, to be Boss’s hostage! They need to go charter a flying saucer, ASAP. Before they can do that, they have some trouble with Boss’s Number 1 (Narendra Nath), but manage to sing their way out. 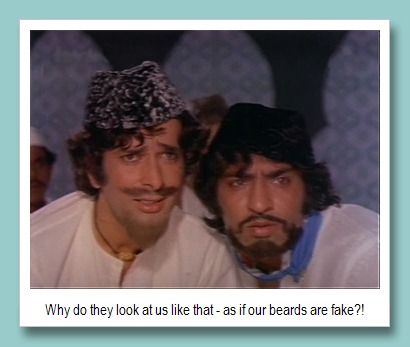 Ere long, Shyam, Dhanno, Dheeraj and Shalu are on their way to the moon. Kamini gets a message from Boss and has to leave for the moon, too. Gopal tries to dissuade her, but she tells him that though she loves him with all her heart, she cannot let her country down. Until MAA and the papers are found, she must stay with Boss. A dejected Gopal leaves for home and his Maa. 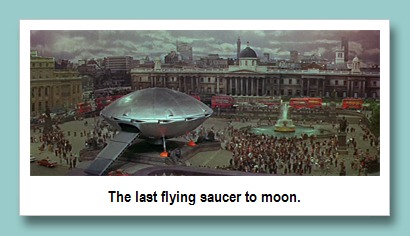 Everybody meets on the Moon, along with a few surprises. Shyam, Shalu, Dhanno and Dheeraj are caught sneaking in, while the Mehras (Shammi Kapoor and Achla Sachdev), Dilawar Khan and Maa (white-haired Bindu) were rounded up by Number 1. (coz he thought it best that the Boss shouldnt run out of Maas and Paas?) Maa and Dilawar/Dwarka are already united and he has given up spying for Pakistan. Kamini is worried about these prisoners and walks up to Boss to ask for clemency for them. The Boss gives an evil laugh and says that she is in for it too, coz, “You’ve been singing duets with other men, and I abhor such treachery. I will have your silly theatre actor killed in front of you!” A terrified Kamini promises to spend her entire life on the Moon, if Boss will only spare her beloved Gopal. 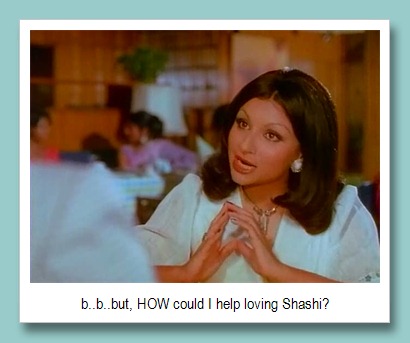 In the meantime, Dhanno tries to escape and in the ensuing scuffle, the birthmark on her shoulder is revealed. Kamini is overjoyed to discover her sister! Boss’s predecessor, the Number 1’s father, had kidnapped the two girls when they were kids. And then the Mehras come forward to claim their long-lost daughters! Parvati (the Maa number 1 - Bindu) is brought in by Number 1, and she runs to embrace “Gopal” who is overjoyed to meet his Maa. She tells him about his sister (Shalu) and then learns that its her Bunty she is talking to. They all wish that Gopal was there to complete their family re-union. Their wish is answered rather dramatically – Boss stalks over to the family and rips off his evil mask. Voila! Its GOPAL! The whole room is stunned.
Gopal embraces his Bunty bhai (who accepts him as bhai only after they’ve duly verified their halves of the Bhagvad Gita), weeps on Maa’s shoulder and tells Kamini how much he loves her (TRRRING! melt-into-a-puddle alert). He tells them that the previous Boss had lured him into this evil business, promising him a leading role. “This is the only long-running show that I’ve ever got a lead part in – and I’ve tried every theatrical company and show.” Kamini mentions films and he growls that he prefers the theatre. 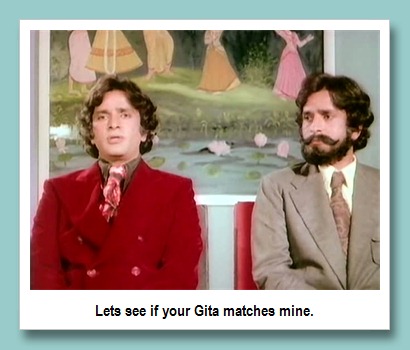 But in all these family re-unions, we’re forgetting the other MAA business. Gopal says that he suspected that there was a leak in his organisation, and was investigating, off his own bat. He hadnt suspected Kamini, since her love was making him rethink his evil ways (and look into a filmi career). But they are no closer to discovering the precious MAA statuette (which they all agree must be destroyed). Then Number 1 shows his true colors. He had that MAA all along, and intends to kill Gopal and become Boss himself. 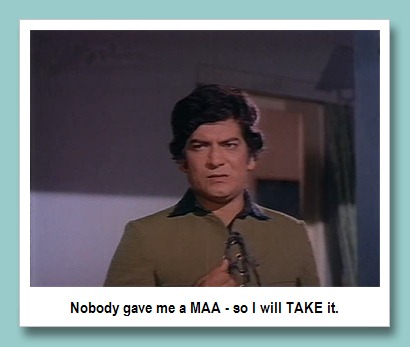 A lot of dishoom dishoom ensues, and Number 1 locks everybody in, after he flips the switch to blow up the moon in a few minutes. He then runs off to catch the last saucer to earth. Shyam, Gopal and Dheeraj swiftly break through the hermetically sealed chamber (a rather gratuitous use of heroes, I thought, since such a feat doesnt require more than one hero, usually). Everybody runs to get on the last saucer and manage to hang on to it, just as it starts off. Shyam and Gopal manage to get in and slowly pull the rest of them in, in between fighting and throwing out the other occupants. Once everybody is in, they shut the doors, and you can see them getting closer to earth as the moon shatters behind them. (That white orb you see in the night sky? Its the giant reflector MD put into orbit after he accidentally blew up the moon during the shoot.)
I must agree with Filmi-eye – this certainly was the pinnacle of the masala dream-team and of my favourite onscreen couple (Shashi+Shashi!), too. Why didnt the film get a release? “There were so many problems. Traveling to the moon was very hush-hush in those days, so there were security issues, and MD blowing up the moon didnt help any… But I didnt discover the main reason until years later. Turns out that Amitabh Bachchan saw this film and realised that he would lose his best jodidaar (other half of his jodi/couple) if it ever released – Shashi had even better chemistry with the flying saucer than he did with Big B! So the film never did release. With Sharmila chairing the Censor Board now, there’s a chance.” 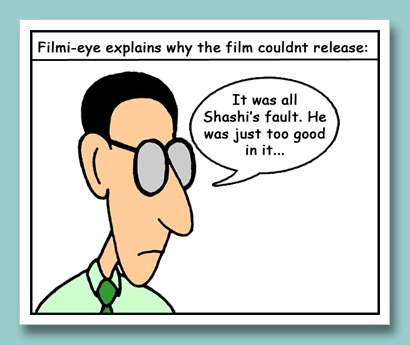 I cant tell you how sad I am that the film got over in three hours. I could have done with more. Here’s hoping someone releases it soon.
There is a heartwarming footnote to this film’s story. Manmohan Desai sent a copy to Alfred Hitchcock who was genuinely touched at this tribute to his classic thriller. “This is the best amalgam of good storytelling with traditional Indian masala elements, that I’ve ever seen. Its a true tribute to my American masala classic.” He wrote to MD.
Previously on OiG Shashi week 2010 about Kaarnama – (day 1) discovery of a new film, (day 2) interview with the director, (day 3) a bromantic break, (day 4) twins torn asunder, (day 5) Shashi!!!, and (day 6) mystery edition.
Posted by Bollyviewer at March 21, 2010