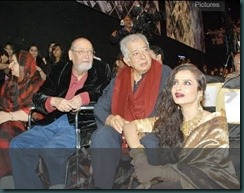 As most readers will know, Shashi Kapoor was recently given the Filmfare Lifetime Achievement Award. What you probably didn't know is that he made a lengthy, significant, and history-soaked acceptance speech that was never televised. You may have read that all he said is "Thank you," but that is far from the truth! How the entire film fraternity (well, with a few notable exceptions) managed to keep their mouths shut about this magnificent oration, we'll never know, but now you, dear readers, have a chance to hear his words in this exclusive report!
Thanks to a fantastic friend at Filmfare, Beth Loves Bollywood and I had a rare opportunity to be present for the awards - if you've seen them on tv or online, we're hunkered in the shadows at the far left of the stage. But our friend only had one pass to spare, so, like good long-lost, recently-reunited masala sisters, we promised to share and share alike. I drew the straw to go in second, so I have the second half of his speech here for you, transcribed word for word off the recording I sneaked with my phone.
Check out part-I at Beth Loves Bollywood. Here’s the second part:

Everything seemed a Sangram [Struggle]. Through hard work and the graciousness of Nanda, who risked being my co-star, I was able to overcome my Rahu-Ketu [Bad Omen] and come out from under the Kaali Ghata [Dark clouds] of my early flops. I toiled for my family's Roti Kapda Aur Makaan [Food, Clothing, and Shelter] and had to make an Ahuti [Sacrifice] of my dreams of being a full-time Shakespeare-Wallah [Shakespearean stage actor]. I must admit, there were times when this Gehri Chot [Deep Wound] to my theatrical ambitions and artistic sensibilities felt like a painful and treacherous Trishul [Trident] lodged in my side. Why can't earning my Daana Paani [Livelihood] be simple? In the 70s, my shooting schedule was more than full. At that Waqt [Time] I was so busy with so many different films that it seemed that in fact Ek aur Ek would be Gyarah [1 + 1 = 11] if I signed just one more project! Shuttling between set and locations for countless shoots, I felt like a rootless Awaara [Vagabond].

I must admit, my Dewaangee [Madness] for Prithvi Theater made me take on too much work. I became an Ajooba [Freak], In Custody of producers, behind the Salaakhen [the Bars of a Cage] of my own ambition! Even my own brother didn't respect my decisions. Kabhi Kabhi [Sometimes] at the end of a long day, I would wonder what I had become: Farishta Ya Qatil [Angel or Murderer]? Had I brought on an artistic Kalyug [Dark Age] on myself? Other times, I felt that my Imaan Dharam [Honesty and Duty] would take me out of my Char Diwari [Four Walls, i.e. home] and give me Mukti [freedom]. But my Trishna [Thirst] for Shaan [Style] brought me away from the Kaala Pathtar [Black Stone (Coal)] my career was starting to resemble, and today I feel that Duniya Meri Jeb Mein hai [The World Is In My Pocket].
Life in films wasnt always a Pyar Ka Mausam [Season of Love]. But now that I am no longer an Anari [Novice/Ignorant], the wisdom of experience has taught me that my Jeevan Sangram [Life Struggle] has been worthwhile. And... everything you hear about the actor's ego is true! One hit and Naach Uthe Sansar [The World Begins Dancing]. It is such a thrill to be Amne Saamne [Face to Face] with the desires of the people, to feel their love! It's truly a career that Dil Ne Pukara [The Heart Called Out]. My fans - both young and old - insist that, as skeptical as I may have been about some of my films, particularly in the heyday and decline of masala, I was never just the Doosra Aadmi [Second Man] of all those famous films.

To emerge a Vijeta [Conqueror] from a struggle that Koi Jeeta Koi Haara [Someone Won, Someone Lost], especially after turns as a Commando and Pakhandi [Conman], is a humbling achievement. Ah! Filmfare *gazes at the statuette* how often has it been Neend Hamari Khwab Tumhare [My Sleep and Your Dreams]?! To fresh actors, I say that there are no Side Streets to success - hard work can turn a Fakira [Outlaw] into a Siddhartha [The Buddha - i.e. a respected, revered figure]. Always know the difference between Paap Aur Punya [Sin and Virtue], and never ignore your fans' Prem Patra-s (Love Letter).