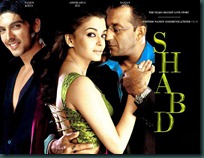 Having declared publicly, on the internet, that I NEVER follow new songs into movies, it was perhaps inevitable that I'd break my own rule! The culprit songs in question were the dreamy Khoya khoya sa, and the dance number Sholon si sholon si – songs that I’ve loved ever since I saw them appear on TV promos 4-5 years ago. I am not sure why I suddenly felt the need to watch the film for these songs, but I did, and I certainly dont regret it. Parts of the film left me a bit dissatisfied, but its a very well made film and was an engrossing watch.
The story opens with critical acclaim for Booker Prize Winning author Shaukat Vashisht (Sanjay Dutt). Unfortunately for Shaukat, the acclaim soon turns sour, with reviewers trashing his next book and calling his characters and plots 'unreal'. Instead of using his talents to write for Bollywood, as any sensible writer of 'unreal' stories would, Shaukat goes into hibernation. 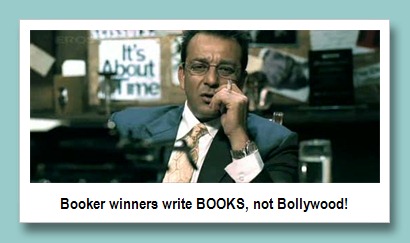 After a hiatus of 2 years, Shaukat suddenly has an idea. He wants to write about forbidden desires, what makes the forbidden more attractive, and how do real people deal with such desires and the ensuing developments. The critics’ panning of his earlier work bit deep and Shaukat wants his characters to be as real as possible. A chance remark by his wife Antara (Aishwarya Rai) shows him the way. 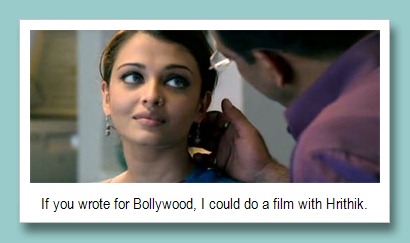 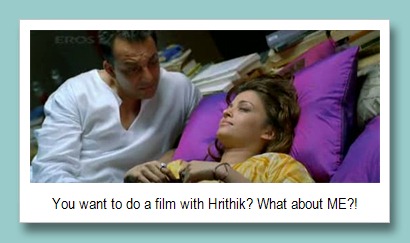 Antara is a fashion teacher at a college (and from her sarees, dresses and general stylishness, thats very easy to believe!) where a new photography teacher, Yash (Zayed Khan) has just arrived. Yash takes one look at Antara and is bowled over. Though Antara is clearly older than him, he sets out to flirt with her, cracking jokes and teasing her. Antara is a bit indignant at his attentions, though its clearly her own enjoyment of it that troubles her more than his aspiration to woo a happily married woman. Its only when Shaukat points out that Yash probably doesnt realise she’s married that she calms down, and decides to enlighten the intrepid youth. 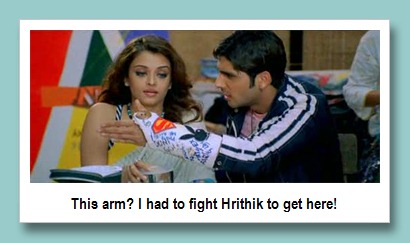 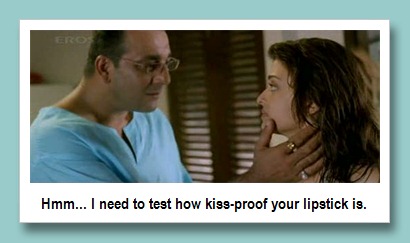 Shaukat, though, has no intention of passing up this opportunity to study a forbidden desire – his wife’s for a charming younger man – at close quarters. He encourages Antara to deepen her friendship with Yash and hold off telling him about her happy marriage. When she is unwilling, he suggests that it might be a good test for her love for him. She should spend time with a charming young man and see if he can make her forget her husband! Shaukat’s reasoning goes something along the lines of - if you truly love your hubby, you're unlikely to fall for anyone else. I’d say that is very flawed reasoning, but then, one musnt expect scientific logic in a film! 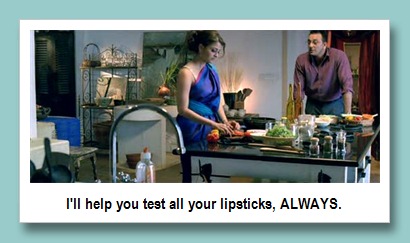 Antara goes along with the idea, relying on her husband’s advice and her own steadfast love for him. The poor innocent! It isnt long before Yash’s cheerful company has her laughing and behaving like a young woman, herself. In his company, she learns to laugh and play like she hasnt, in a long time. He brings back her carefree youth (though she hardly looks old enough for her youth to be a thing of the past) and she is happy in a way that she’s forgotten to be, in her daily hum-drum existence. Too late, she realises the dangers of flirting with love. Shaukat himself is torn between jealousy and a desire to see his story play out to the end. 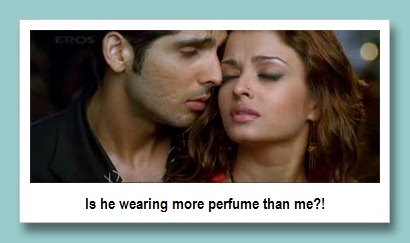 The movie is mainly about Shaukat’s obsession with realistic writing and how it clouds his perceptions. For him, ultimately, the boundary between reality and writing is completely blurred. And that part is very well executed. But would a Booker Prize winning author really write about an adulterous affair and its consequences to the trio involved? Surely that subject was considered avant garde only in a bygone era? Even if we allow suspension-of-disbelief to operate in this department, how can Shaukat be certain that Antara will satisfy his voyeuristic curiosity with all the truth? Besides, Antara’s husband is a famous writer. Surely that makes it more likely that Yash will discover her happily married state, sooner rather than later? But these are just minor quibbles. The main source of my dissatisfaction was with how the triangle resolves. I wish the film hadnt fought shy of being as daring and unconventional as it set out to be. 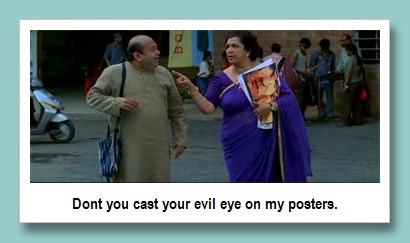 On the plus side is the taut, well-told story, the good performances and the lovely music. Sanjay Dutt is awesome as the driven, tormented and manipulative Shaukat. Inspite of all his great performances, to me, he is always the loud gangster that he usually plays. So, its always a nice surprise to see him turning in a more subtle performance! Aishwarya’s part mostly consists of being beautiful and biddable, and she’s honed that part to perfection over the years. Zayed Khan has a charming role and does pretty well, too. 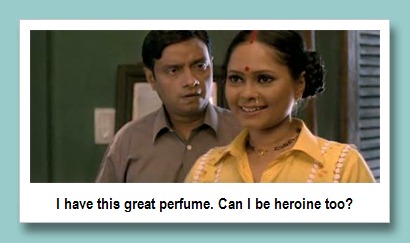 My favorite parts of the film were the songs – my raisons d'etre for watching it. Vishal-Shekhar’s haunting music, Vishal Dadlani’s lyrics (is it the same 'Vishal' in both cases?), the lovely vocals (Sonu Nigam was my favorite) and the pretty visuals – all added to up to some very good songs. For once, in a new film, I not only noticed the songs, I didnt even fast forward them!
Posted by Bollyviewer at March 30, 2010