With the vilaayti twin on his way to his watan (country), you’d think that the found part of the lost-n-found formula is almost about to be accomplished. Well, you’d be wrong. Do not underestimate MDbhai’s genius… We leave Shyam on the plane, drinking heavily, with the mysterious lady X (Sharmila Tagore) keeping a sharp lookout a few rows behind.
We fly into India, ahead of the dimpled-duo, to meet the other twin Gopal. As I told you, MD caused him to grow up into a small-time theatre actor. Well, just as we go to find him, he’s landed his first starring role, and rehearsals are in full swing. We come upon him, in his shiny military uniform, playing Napolean Bonaparte, at Waterloo. And we realise why he isnt a big star yet, nor likely to be – he fluffs his lines something terrible.
Napolean (roaring): Wellington kameene, sherni ka doodh pasand karta hai to saamne aa (Wellington rascal, if you like tigress’s milk, come here!)
Wellington, not finding the right cue (which should have been agar maa ka doodh piya hai to… if you’ve drunk your mother’s milk), forgets his lines: Err… I prefer cow’s milk. 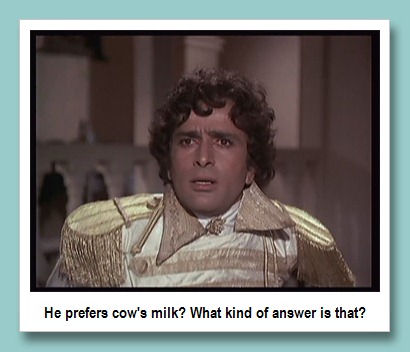 The director is furious with Gopal for fluffing his lines, coz the Health Ministry would be after him for not promoting breast-feeding. Needless to say, poor Gopal is not long for this stage. He decides to drown his sorrows in a nearby-bar, where he is spotted by Shyam’s mysterious Lady X. It so happens that when Shyam and Lady X landed at Bombay airport, Shyam went into the men’s loo and passed out in a drunken stupor. Lady X, fearing that he had escaped out of a back door, summoned her henchmen to search for him outside the airport. Knowing of Shyam’s fondness for ethyl alcohol, she caused every bar in the city to be searched – and thats how she stumbled across Gopal. She is dazzled by Gopal’s shiny Regency-wear (didnt I tell you that he always goes around in fancy-dress?), but recognises those eye-lashes instantly.
So, when Gopal stumbles out of the bar a few minutes later, he is strong-armed into a waiting car, and driven to a luxurious mansion (complete with sweeping staircases and shiny chandeliers). And there he is interrogated by the menacing Mr. Suri (Mehmood). Suri’s henchmen turn his pockets inside-out, and when all they find is a stick of mascara (those incredible eyelashes need a lot of tending – and MD was disposed toward reality in this film) – they tie him up and invite him to reveal all. Gopal obligingly reveals all his Napoleanic dialogues, to Suri’s patent fury. Suri exhorts Gopal to tell him all about MAA, and that finally rouses Gopal to fury. Its bad enough that this heathen does not appreciate his stirring dialogue-delivery, now he wants to talk about his MAA?! He clenches his teeth and shows that he’s the stuff of leading roles, not comic side plots. A few tugs and his bonds break like brittle thread, and then he takes on the combined might of the enemy. Poor Suri – he doesnt even get the time to say, “Kitne aadmi the”* before he meets the ground in a deep embrace. 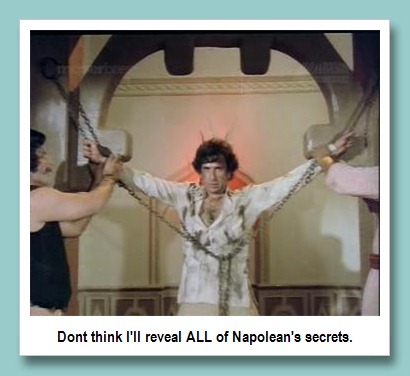 “But didnt Cary Grant have a bottle of Bourbon poured down his throat, before he was let loose on the steering wheel of the car? He didnt dishoom his way out!” I pointed to Filmi-eye. “Of course” he replied, “But MD was aiming for realistic cinema, and who would believe that a real Bollywood hero could be defeated by a paltry dozen goons?” So true. I wouldnt, either. And my suspension of disbelief is very well developed…
Well, Gopal stumbles out of his prison, and makes for home. He soon realises that he is very far from home. So when a passing motorist offers a lift, he gladly accepts. Getting in, he realises that he’s lucked out in the driving companion stakes – the driver of the car is none other than the beautiful Lady X. She introduces herself as Kamini and sets out to charm him. Nothing loath, Gopal brings out his own dimples and the two are soon singing duets. Kamini is puzzled by the change in her drink sodden quarry, but goes along with the flow and pretends to fall for him. Halfway back, the car stalls and neither is able to revive the engine. Kamini has a house nearby, and invites him to spend the night there. 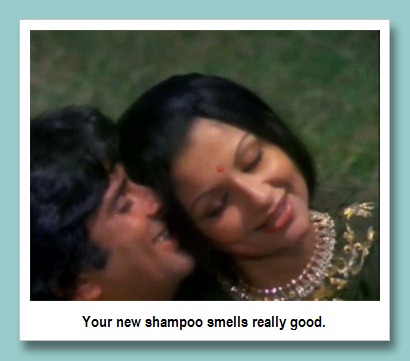 Once home, Kamini plies Gopal with drinks, sings him seductive songs, and allows him to steal a kiss. Yes I know what you’re wondering – no we DO NOT see the kiss. Just as well, perhaps. Wouldnt want the screen to burn out before the film was over! Anyhow, once Kamini has got Gopal all softened up, she asks him about MAA. Now dont get me wrong. Gopal loves his Maa as much as any Bolly-hero does (a LOT!), but this sudden escalation of interest in her, strikes him as suspicious. So, he starts watching Kamini very closely and secretly siphoning off his wine.
He soon drinks Kamini under the table, and proceeds to search her house. He comes across an old photo of his on her bedside! He flips the photo, and on the back is an address in Kashmir. There and then, he decides to go to Kashmir and solve the mystery.
But more about Gopal later. Lets see what happened to Shyam whom we left sleeping in the men’s washroom. He stumbles out of the loo, only to pass out on the pavement. A few goons are riffling through his pockets when the knife-wielding Dhanno (Tanuja) saves him. One look at his fair-n-lovely countenance, and she takes him home to sleep off his daaru. After a good night’s sleep, Dhanno gives him a good talking to. He is soon telling her his life story, and she promises to help him find his Maa. Once they’ve sung a song pledging their eternal love to each other, they embark on their search. 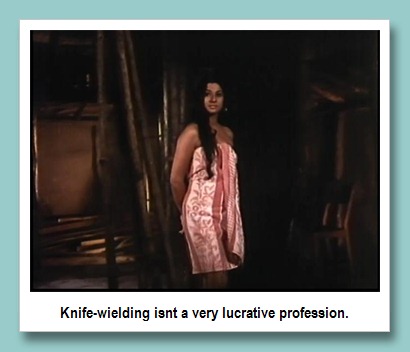 “Tanuja?” I asked Filmi-eye. “Didnt MD need a dancer? I thought maybe Hema or Rekha…” “He actually wanted Neetu, but Rishi threw such a fit at the prospect of Neetu being romanced by his suave Uncle that she had to refuse. Then MD thought of Shabana (they’d just wound up Parvarish), but Shashi vetoed that. Jennifer refused to let him work with Shabana unless she herself was on the set with him all the time – and Shashi was terrified that she would put a stop to all the extra food he managed to gobble up on the shoot! Then Tanuja asked him for a role (Kajol had begun “acting” – loudly - at home, and the Mom needed some peace and quiet), and MD thought she’d be great.”
I wondered how he got along with Sharmila Tagore, and his dreamy-eyed smile was answer enough. “She was very friendly and always willing to chat in between takes.” What did they talk about? “Everything… films, acting, family-life.” When I urged him to expand, he told me that Sharmila was a bit dissatisfied with how her career was going.
“Filmi, I worked so hard to get noticed as a serious actress. I even gave up my brilliantly stylish bouffants for it. And now, I dont get any fun roles – they all go to Hema because she still wears a wig! It just doesnt pay to be talented in this line of work.” Sharmila confided in Filmi-eye. “And things were rather tough for her on the home front, too. Saif had begun to ask her help for his science homework. Poor woman, my heart went out to her.” I dont doubt that! And who can blame him?
Tomorrow: Why is everybody so interested in Shashi’s Maa? Will the scattered family ever be re-united? All these questions, and more, will be answered before THE END.
Previously on OiG about Kaarnama – discovery of a new film, interview with the director, a bromantic break, twins torn asunder and Shashi.
*Gabbar’s famous dialogue in Sholay – how many men were there?
Posted by Bollyviewer at March 20, 2010