So the twins were torn asunder in the before-the-credits part of the film. Bunty strayed into vilaayti (foreign) lands, while the twin’s father – Dwarka – strayed into Pakistan. The residual family in India – Parvati and Bittu - relocate to a new town. Parvati begins to work as a domestic help when a dizzy spell at work informs her employer of her pregnancy!
Parvati’s pleasure in the latest nishaani (momento) of her now-dead hubby is a bit mixed. She is happy but worries about making ends meet. Her kindly employers – Durga (Nadira) and Inspector Dev (Ifthekar) promise to take over the child, since they are childless, themselves. So, one fine day, Parvati and Durga go off to Kashmir, leaving Bittu behind with the other half of his to-be-sibling’s to-be-parents. Soon, Mom and Durga return with Durga’s baby daughter Shalu. 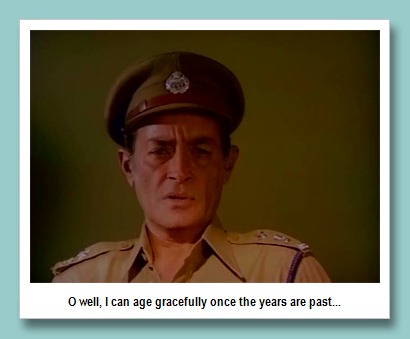 The years fly by, and the kids grow up – Bunty/Shyam and Bittu/Gopal into Shashi Kapoor, and Shalu into Bindu. According to Filmi-eye, MD had intended Bindu to be Shashi’s second leading lady, but when she was roped in to play Shashi’s Maa, he felt that it wouldnt do. “You know Filmi, Indian audiences like their films to represent true moral values. Its fine for the hero to love his Maa more than his wife, even to try to mold said wife into a Maa-copy, but for him to marry a Maa look-alike would never do,” he clarified to Filmi-eye. So Shalu landed up with a different narrative arc. 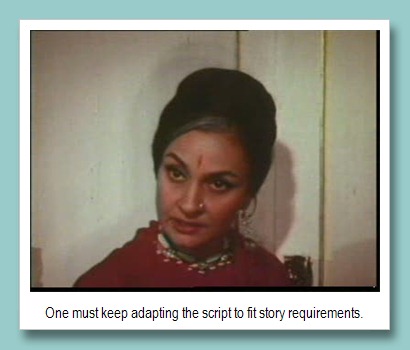 First, we go to vilaayat to see what happens to Shyam. He has turned into what every Westernised person is – wears slick suits, drinks and (whats worse!) dances with women not his wives! But he does this, not because he is Westernised, but because he is missing Maaa and Bittu and is terribly unhappy. So, we get lots of shots of Shashi angsting and drinking and dancing… 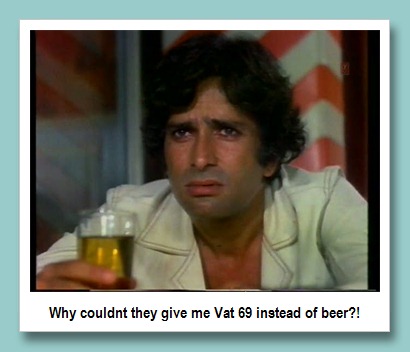 Filmi-eye tells me that Shashi turned up for shooting, confidently expecting to play the Indian version of Cary Grant’s sophisticated rich executive, Roger Thornhill, and lets face it – nobody’s better equipped to do it than Shashi. Sadly for him, MD had completely different ideas in mind. Day one of shooting was reserved for the Indian twin – Bittu. MD had caused Bittu to grow up to be Gopal, an actor who does bit parts in small plays, and goes around in fancy dress, even outside the plays. To his credit, Shashi, took it very well. He threw himself into the part and called upon his long experience as a theatre actor, to play the part convincingly. 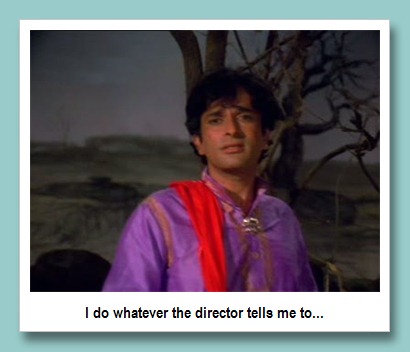 The problems on the set began when Shashi was required to shoot for the Shyam part. He turned up on the sets with untidy hair (gone were the glorious curls!) and long sideburns. But what distressed MDbhai even more, was his insistence on speaking all his dialogues in a British-accented Hindi. The mystery was explained when Shashi told them that he’d decided to be more serious about his performances. Henceforth, he would carefully study his roles and live the parts, to be more convincing as an actor. In short, he’d been bitten by the “method acting” bug. He’d been keenly observing wife Jenniffer’s, (and his kids’) Hindi accent[s] for weeks, in preparation for the Shyam part. He’d eaten nothing but boiled potatoes and Shepherd’s pie for… since forever - all so that he could be convincing as a vilaayti Shyam. “I want to be more than a pretty face! I want people to take my acting seriously,” he told Filmi-eye. 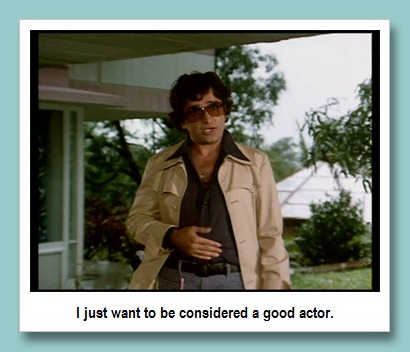 But when Shashi earnestly told the Maestro that he’d set aside one whole month that would be dedicated to shooting the Shyam part, MD blew a fuse. “What does he think I am – a one-film director?” he fumed. He took Shashi aside for a man-to-man session, and reminded him of his own words – that the Indian audiences want fantasy, not reality. “Shashibhai, I’ve known your family for years. I’d never give you wrong advice. People want to see your curls, not your acting! And if you start putting aside whole months for one film, you’ll only be offered one film every few months. And before you know it, you will be taking months or even years-long "vacations". So stop this "serious" actor gag and work like a professional!” MD reportedly told Shashi. 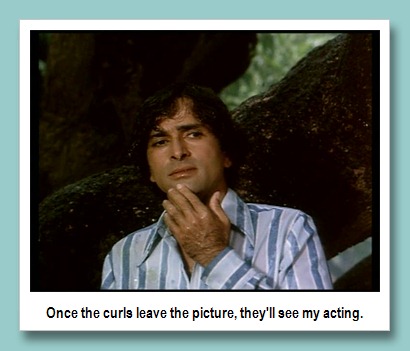 To his credit, Shashi took the Maestro’s advice. The curls came back and one never heard of him devoting himself to any particular film again. But he stubbornly clung to his British-accented Hindi while shooting for the vilaayti Shyam part. “Just between you and me,” Filmi-eye told me, “Jeniffer had taken to calling him "Darling Ham" at home, and Shashi was determined to prove that he could forsake hamming for honest-to-goodness emoting. All our representations that the audience prefer hams, fell on deaf ears.” Thankfully, by the time they dubbed the film (in 1979), Shashi was way too busy to remember his “serious actor” ambitions, and the dialogues were dubbed in his normal, impeccable Hindi.
Oh dear! I’ve already done almost 900 words today, and havent moved any further forward with the film’s plot! Just goes to show why a 2.5 hrs film takes months to make – there is so much going on behind the scenes. Before I sign off for today, let me give you a quick précis of what happens in the first 30 min after the credits.
The Mehras, Shyam’s foster parents, are wealthy enough for him to drink and angst away in several different nightclubs all over vilaayat. In one of his drunken stupors, he dances (and sings) with a mysterious and glamorous woman (Sharmila, who else?!), whom several people are after. She disappears after their dance, and her pursuers transfer their attention to Shyam. When they hear him declare that he will go to India, the gang members look at each other significantly, and one of them talks to his watch, which is apparently a hotline into Boss’s lair. The invisible boss tells his henchmen to leave Shyam alone, and follow him to India. He is then heard telling a cloaked figure that “it” will probably change hands in India, and they must grab it before the Pakistani and Indian intelligence get to it. 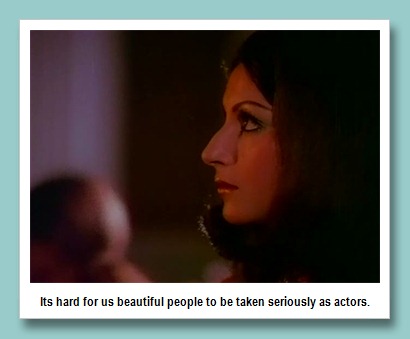 With Shyam on his way to India, the stage is now all set for mistaken identities…
Tomorrow: The plot thickens!
Previously on OiG about Kaarnama – discovery of a new film, interview with the director, a bromantic break, and twins torn asunder.
Posted by Bollyviewer at March 19, 2010