Based on the short story Saanch Ko Aanch (Truth in Trouble!) by famous Pakistani satirist Shaukat Thanvi, Neend Hamari Khwaab Tumhare (My Sleep and Your Dreams) tells the tale of an ambitious social climber with gentle humor and tons of masala.
Ajjoo Hajjaam (Ajjoo the barber - Om Prakash) strikes it lucky with a lottery win and installs himself as Nawab Ajmatullah Khan Farooqui in Delhi. His rags-to-riches story however, doesnt quite go according to plans. He manages to worm his way into Delhi's nawabi society presided over by the extremely-high-in-the-instep Khan Bahadur (a very dashing looking Balraj Sahni) and his cultured, pious Begum (Nirupa Roy). Ajjoo's position in high society however, is under constant threat from his delightfully uncouth wife Begum Ajmatullah Farooqui (Manorama). He hires Miss Pal (Shashikala) to teach his wife the ways of fashionable society, but the lady remains unrepentantly pedestrian in her language and manners. He finally gives up on her education and lets it out that she suffers from mental problems. 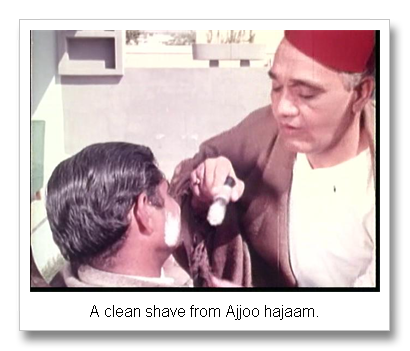 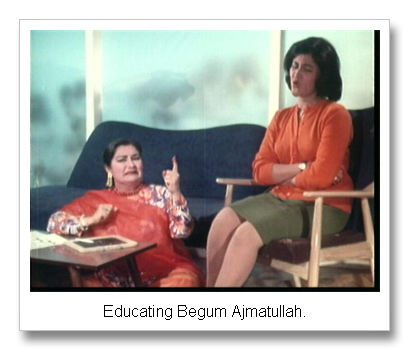 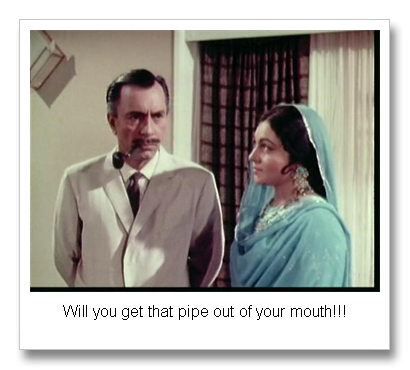 On the other side, Begum Khan Bahadur has problems of her own. Her husband, though very good looking, insists on smoking smelly pipes and commending their daughter Nishad's (Nanda) poor taste in clothes. She is worried that such a sartorially-retarded girl will never find a "good match"! Fikar not, Begum Khan Bahadur - the maker of Nishad's fashion sense has also made the ideal mate for her. Ajjoo's educated son Anwar (Shashi Kapoor) takes one look at her playing badminton (very, very badly, in a terrible costume) and is struck by Cupid's arrow (do you need any more proof that love is blind?). Nishad however, is unimpressed and needs to be wooed. Our doughty hero manages this in 5 minutes flat (the guy is smooth), and the romance is ON. There is much singing and dancing before the inevitable trouble kicks in. 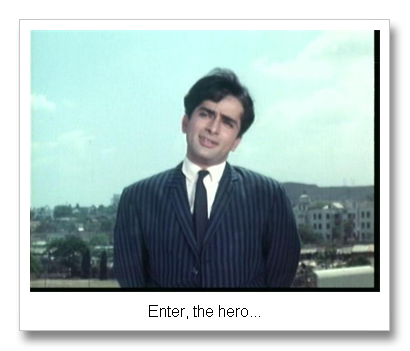 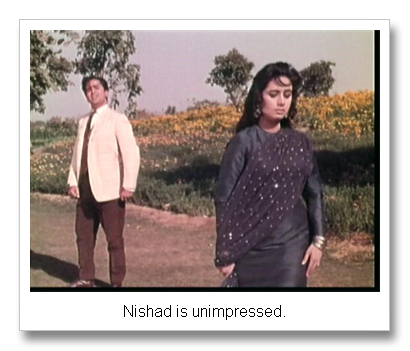 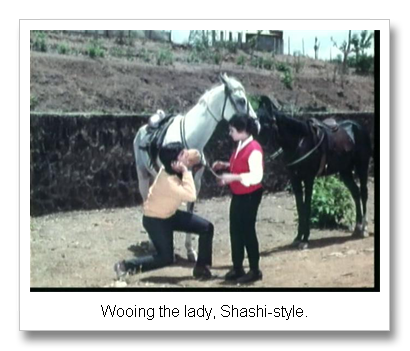 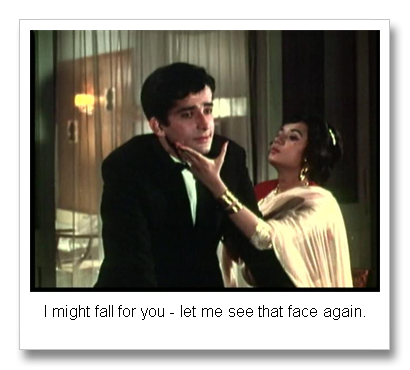 Anwar's mom wants him to marry her niece and not the girl of his dreams (she doesnt like Nanda's fugly costumes either?). She threatens to reveal their plebeian origins to the blue-blooded Khan Bahadur and wreck Anwar's romance. The Khan Bahadur is very particular in associating only with aristocrats and naturally wants his daughter to wed the scion of a noble family. Poor Anwar's family is as far removed from nobility as is humanly possible. His conscience troubles him about deceiving his beloved and her family, and he longs to tell her the truth. Nawab Ajmatullah however, sees no need for such honesty and prevents Anwar's confession. This leads to a lot of angst, some lovely songs and an opportunity for the villain to do his evil deeds. 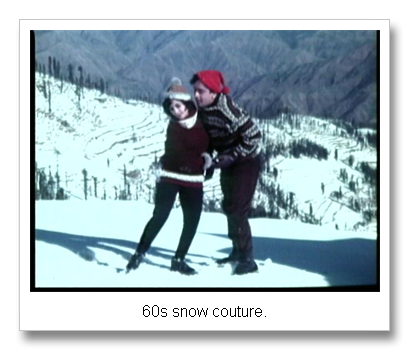 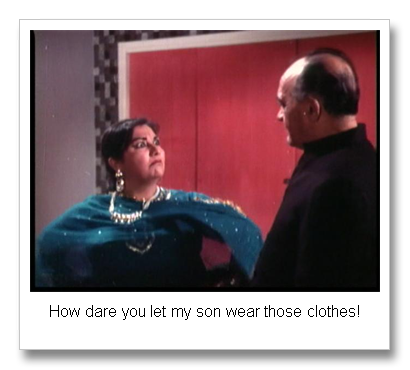 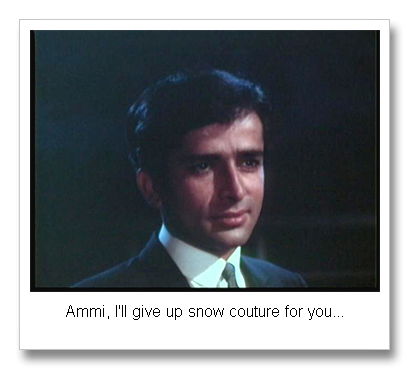 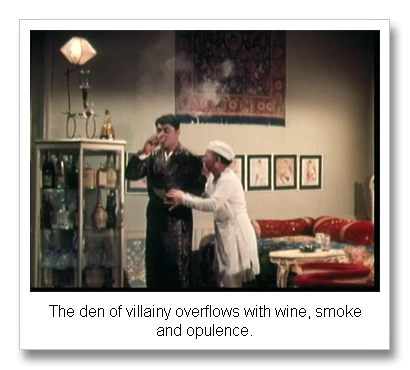 The nawabi context of the story allowed the script-writer to use Urdu extensively in the dialogues and the result is delightful. Unlike the theatrical nawabi dramas of 60's or period pieces like Mughal-e-Azam where Urdu dialogues are declaimed in high dramatic style, here we have beautiful Urdu spoken as it should be, and can savor its awesomeness! 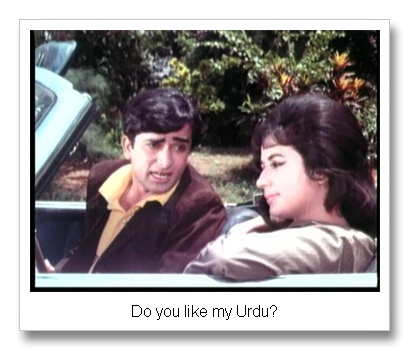 Performance-wise the two sets of nawabs are splendid and hold their own against their gutsy wives! Balraj Sahni is sauve and smooth even as he plays the exaggeratedly snooty Khan Bahadur. Have I mentioned that he looks super handsome? Nirupa Roy is in her element as the pious and somewhat preachy Begum Khan Bahadur. Om Prakash, as the determined social climber is great as usual and manages to imbue Ajjoo Hajjaam's social ambitions with a touch of pathos that invites the viewer's complete sympathy. My favorite in this movie though, is Manorama who gets into the skin of the gutsy, determined and unashamedly uncouth, Begum Ajmatullah. I cant imagine any other actress playing the part half as well - she invites you to laugh at the idiosyncrasies of high society even as she keeps pricking her husband's pretensions to aristocracy. 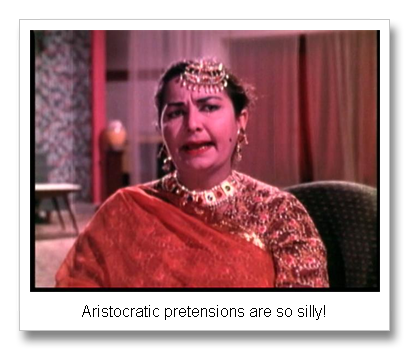 Shashi Kapoor reprises his usual 60s tall-dark-and-handsome-hero persona which is very watchable and makes for some great moments in the movie (Hey its Shashi - dont expect a more objective appraisal from me!). Nanda reprises her Jab Jab Phool Khile avatar and pouts and whines a bit too much, but does come through as more interesting in the dramatic scenes. Her dress sense also improves half-way through the movie! Anwar and Nishad's romance - the dramatic focal point of the plot - is very well done. There are some melt-into-a-puddle-from-the-romance moments and they are both such fun in a cute, 60s kind of way. 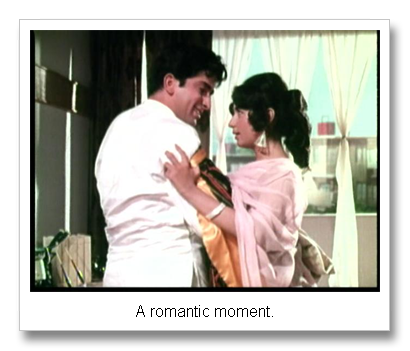 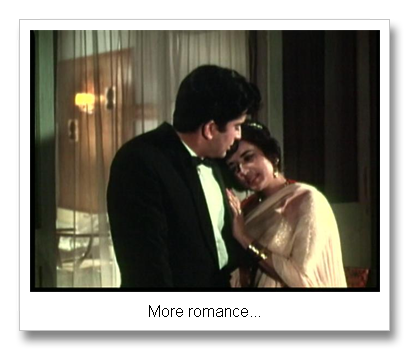 Of the other important characters, Anwar Hussain is great as Doctor Rana - the friendly neighbourhood physician who moonlights as Cupid and Agony Uncle in his free time. Lotan is satisfyingly cunning as the greedy, conniving, matchmaker Mir Sahib. Shashikala is okay as the westernised governess, Miss Pal. Manmohan isnt particularly villainous as the villain-in-chief, Nawab Shaukat. The comedic subplot - an essential feature of all 60s films - is provided by Rajendra Nath who plays the indefatigable romeo, Shibbu. His comedy, though quite routine, is also fun. 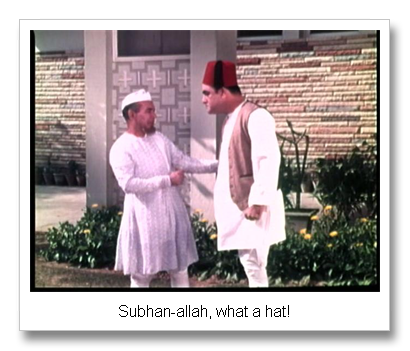 The music for the movie is composed by the great Madan Mohan (his tunes were used for the songs in Veer Zara). Here he has composed some great numbers sung by Asha Bhonsle and Mohd. Rafi. From the peppy Yun rootho na haseena, Kabhi tera daaman na and Husn jab jab ishq se, to the sultry Bheegi hui is raat ka aanchal and the lovely ghazal Koi shikwa bhi nahin every one of them is hummable and fun to watch.
The movie is pure 60s masala in format with over the top costumes and sets, yet it takes such delicious pot-shots at high society and class difference that it cant be dismissed as totally frivolous. It is above all, a fun movie and a great watch. If you like Bollywood's 60s romantic comedies, you are going to love this one.
Posted by Bollyviewer at June 30, 2008