Nabin Roy and Gurcharan's families have lived next door to each other for years in cheerful friendship. Their connecting balconies make it easy for Gurcharan's orphaned niece Lalita to flit to and fro between the two households - both of whom regard her as one of their own.
Shekhar, the younger Roy son is a spoilt, rich, young man who has taken Lalita under his wing. He bosses her and attempts to educate her. She responds by hero-worshipping him, fetching and carrying for him, and obeying his every command. Shades of Pygmalion and his Galatea? This Pygmalion, though he considers Lalita very much his creation and property, does not fall for her until the entrance of the third point in this interesting triangle.
Lalita's beauty, her cheerful helpfulness and sweetly caring ways win hearts everywhere. Particulary afflicted is her friend Charu’s visiting Uncle Girin who begins to find excuses to get closer to her. Shekhar’s jealousy is roused when he hears about this budding friendship and poor Lalita bears the brunt of his unpleasantness.
Then comes the night of the secret wedding. Lalita's young cousin has fixed her doll's wedding for an auspicious time. On the night of the doll's wedding, Lalita playfully garlands Shekhar at the auspicious time. Shekhar, a budding lawyer, lets her know that this constitutes a form of Hindu marriage. He follows it up by garlanding the ecstatic Lalita, completing the wedding ceremony! Lalita accepts Shekhar’s pronouncement as the gospel truth and henceforth, considers herself a married woman – a parineeta. So, they live happily-ever-after? 'Fraid not. In a truly filmi twist, complete with misplaced letters and misunderstandings the love-birds are parted. Considering that the book was written in 1914, you may well wonder how Sharat Chandra knew how to write a masala Bollywood story! 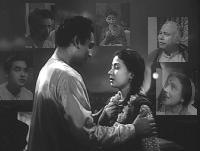 Bimal Roy's 1953, B&W version is set in Calcutta of yore and is fairly minimalist. The narrative is simple and sticks to the spirit of Sharat Chandra's writing. Ashok Kumar plays Shekhar with his usual skill - he is possessive, mischievous, jealous and loving by turns, and completely believable. A very young and lovely Meena Kumari plays Lalita. Lalita's part in the story involves much silent despair, which is right up the alley for the renowned tragedy queen. However, there is much more to both Lalita and Meena Kumari, and with Bimal Roy's able direction, you see it! Like Friday's child, Lalita is warm and loving. She is also intensely vulnerable and loyal to a fault. Put this together with her beauty and you can see why two very different men fall in love with her. The third-wheel - Girin - is played by Asit Baran who also does a good job in the limited screen-time he has. The rest of the cast consists of the ubiquitous Nazir Hussain who plays Gurcharan, Badri Prasad who plays Nabin Roy and Pratima Devi his wife, Baby Sheela who plays Lalita's precocious young cousin Annu, a very young Manorama who plays Charu's Mom, among others. 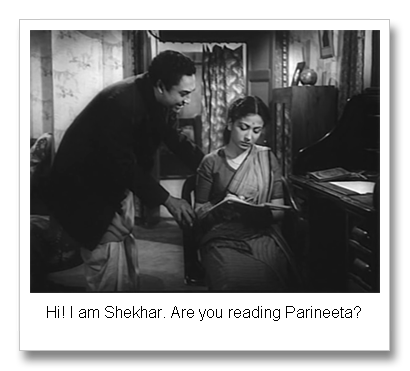 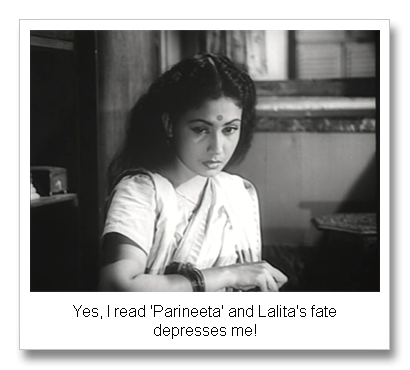 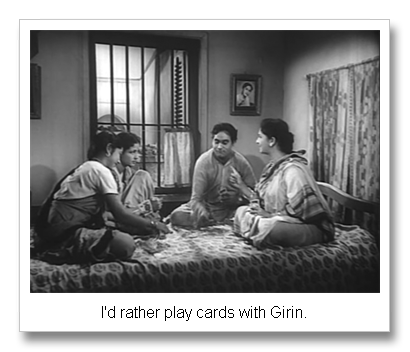 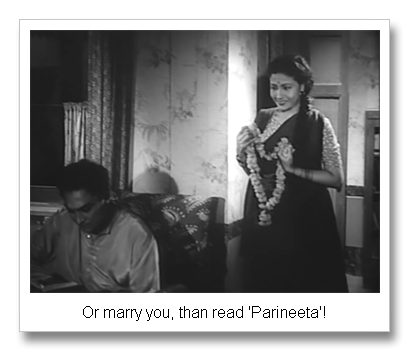 The story flows in a gentle stream with no loud dramatics and no unnecessary diversions. Even the songs fit into the narration so smoothly that you barely notice them - they are beautiful but unobtrusive. Girin's visit to the theatre gives rise to the only theatrical touch - the Manna Dey-Asha number Aye bandi tum features great dancing by famous Kathak dancer Gopi Krishna. Bimal Roy uses the other songs - Chali radhe rani and Kab tak rahoge aakhir - in the background at major dramatic moments. This serves to highlight mounting tension on-screen much better than the loud dialogues more often seen in Bollywood. There is also a fourth song Gore gore haathon mein that plays during the dolls' wedding but is inexplicably missing from my copy of Parineeta. 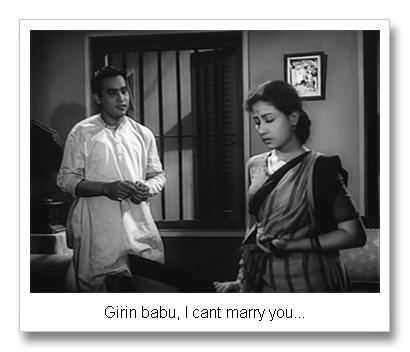 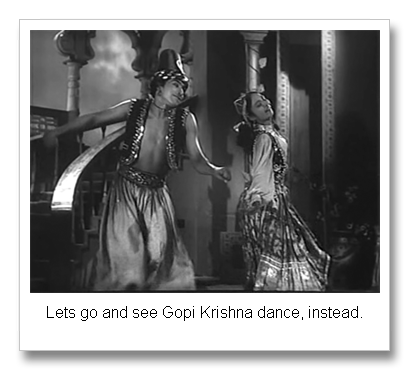 The Vidhu Vinod Chopra-Pradeep Sarkar version is a lot more glamorous and over-the-top, both in terms of acting and visuals. The story is set in 60's Calcutta and all the over-the-top excesses are completely in keeping with 60's-style movies. Saif Ali Khan's Shekhar is way more selfish, bossy and jealous than Ashok Kumar's version. I must of course, mention that he is way hotter than Ashok Kumar, too (I do love Dada Mani but he had his limitations.)! By the same token, Vidya Balan's gorgeous Lolita (did they have to turn her into Nabokov's sexually precocious heroine?) is more beautiful, more talented and more active than Meena Kumari's Lalita. She is also shown to be a stronger and more assertive person - which makes her doormatty-suffering-in-silence tolerance of Shekhar's excesses rather inexplicable. The third point of the triangle - Girish - played by Sanjay Dutt gets better treatment in this version. The romantic scenes between Girish and Lalita make you wonder how Lalita can remain blind to him (I guess its Saif-induced blindness, and totally understandable)! Sanjay Dutt looks a bit old and dissolute for Girish, but still does his part well. 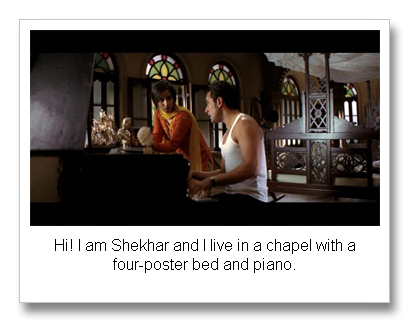 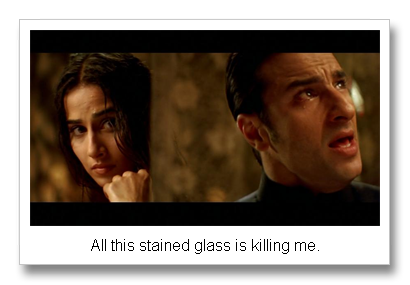 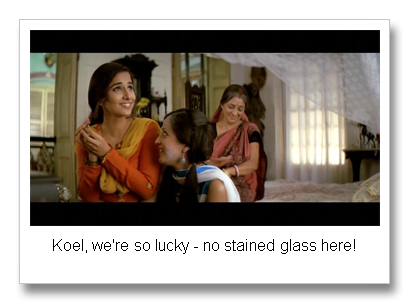 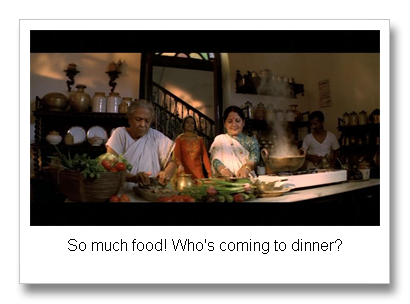 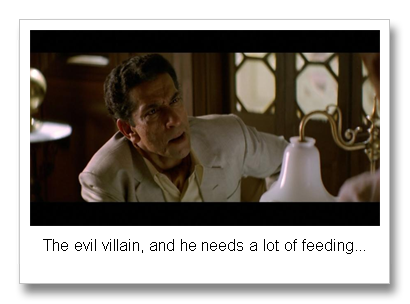 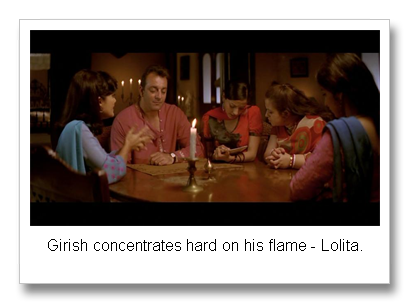 Apart from the chief protagonists, this movie takes time to flesh out all the minor characters and add on some new ones, as well. One such added-on character is Shekhar's superfluous friend Ajit (Ninad Kamat) - playing Dr. Watson to Shekhar's not-at-all-Holmes. In a true 60's masala-flick this would have been the comedian Rajendra Nath or Johnny Walker - so, perhaps this addition isnt so superfluous. Shekhar's father as played by Sabyasachi Chakraborty, is a thoroughly well-rounded villain. He not only schemes to rob people by loaning them money, he also ruthlessly suppresses his wife (Surinder Kaur) in his spare time and runs around in large black cars. Raima Sen is cute as Koel and Diya Mirza is super glamorous in her brief appearance as Shekhar's fiancée. The costumes and sets are divine and make for gorgeous visuals. 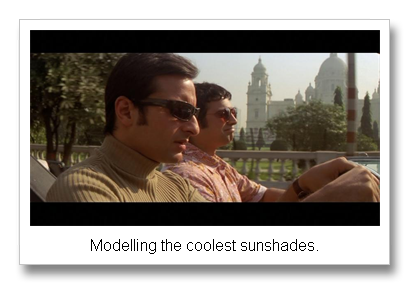 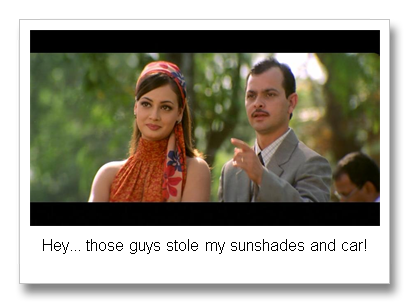 Shantanu Moitra's music is unforgettable. From the romantic duet Piyu Bole, the fun numbers Kaisi paheli hai, Dhinak dhinak dha and Kasto Mazza hai, to the haunting Raat humari to and Soona man ka aangan - the songs are all beautiful and evocative of a bygone era.
My only complaint with the new Parineeta is the ludicrous last scene which is completely out of tune with the rest of the movie and serves to trivialize an otherwise beautiful film.
So readers, watch Bimal Roy's version for a more realistic depiction of Sharat Chandra's classic romance and Pradeep Sarkar's adaptation for a more spicy and gorgeous look at the same story.
Posted by Bollyviewer at June 22, 2008