No matter how often The Prince and the Pauper, The Prisoner of Zenda and The Man in the Iron Mask are milked for a film, I never get tired of the stories. And when all three are simultaneously called upon, in a single film – well, its just fun times three! Here, they are well blended with the Wadia Brothers’ own version of swashbuckling masala and Usha Khanna’s lovely music – so its 2.5+ hours of pure paisa vasool entertainment. 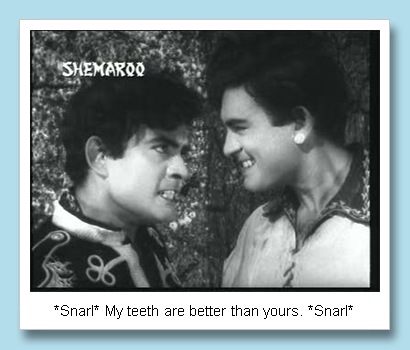 Mixing up so many plot elements makes for a very convoluted plot, so lets see if I can recall enough of it recount it coherently…
The kingdom of Ajitgarh has just begun rejoicing at the birth of their Prince Kiran, when the king, Maharaja Hamir Singh, receives some disquieting news. His queen has produced a twin brother to Kiran. Hamir SIngh, following in the footsteps of the King of France, takes a deep look into the future and comes up with a brothers-fighting-for-the-throne scenario. To avoid such a future, he hands over the younger twin – Badal – to his trusted courtier Sangram Singh (Sheikh Mukhtar). He gives Sangram Singh the estate of Devpur and asks him to live there, far from Prince Kiran. 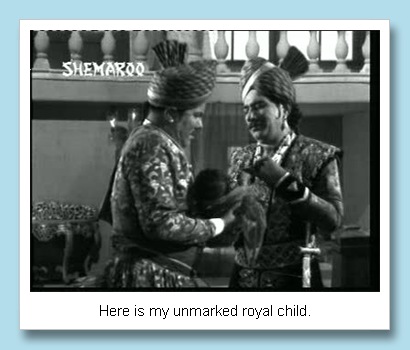 A few years later, the king dies. Kiran being still a child, Hamir Singh’s younger brother - Mansingh (Hiralal?) – rules as regent until the prince is old enough to be crowned. He teaches the young Prince to drink and carouse. And he uses his regency to dispossess Sangram Singh of his Devpur estate. Sangram Singh and his dependants take to the roads, waiting for Kiran to grow up and deliver justice. They sing songs and the years just melt away! 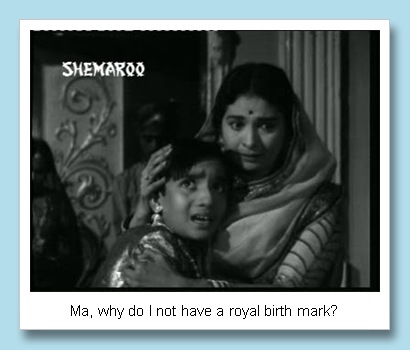 The twins grow up to be Sanjeev Kumars of opposite characters. Kiran grows up to be a drunk and debauched young man, while Badal grows up to be an ideal young man with a sunny and helpful disposition. The date for Kiran’s coronation draws near, and so does the date of his betrothal. His intended wife, Princess Padma of Dhirajpur, is about to arrive for the coronation. While his mother rejoices at the news, his girl friend Ratna (Helen) is not happy about his upcoming nuptials. 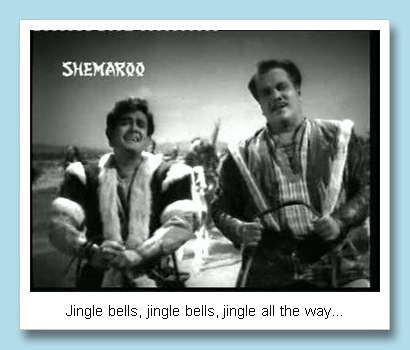 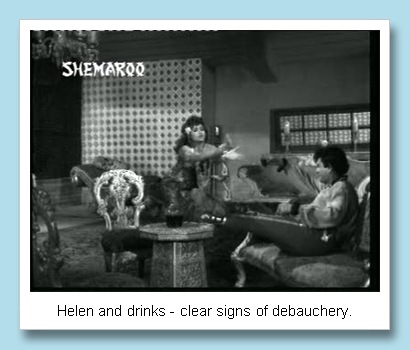 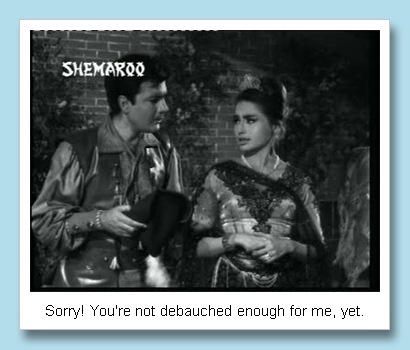 Ratna goes off to ensure that Kiran is too drunk to go anywhere, while Vikram goes off to discharge his duty. They both have a surprise in store when Badal comes to the rescue of Padma (Nazima) and her besieged entourage. Vikram and his band mistake him for Kiran, and take off. A grateful Princess Padma begs Badal to accompany her to Ajitgarh. Badal, unaware of his twinliness, happily accompanies her to the palace. At the palace, he is mistaken for Prince Kiran and promptly hustled into the Prince’s quarters. 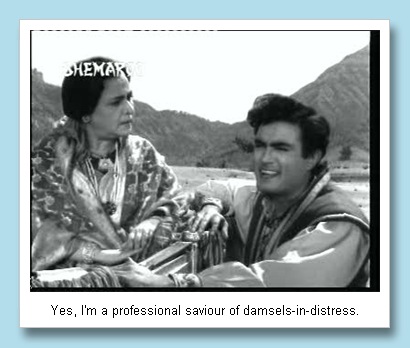 His royal welcome convinces Badal that he has wandered into Bedlam. But then, he encounters the drunk Prince in his quarters. Both of them are amazed at their likeness (not having read Dumas or watched a movie before, they dont suspect their twinliness) and Kiran is quick to take advantage of it. He disappears to spend quality time with his alcohol bottle and Ratna, while Badal, as Prince Kiran, is sent to entertain Padma and her entourage. Needless to say, Ratna and the 'Prince' speedily fall in love, singing lovely duets. But the rest of the royal household is extremely puzzled to see a sober and abstemious Prince who also takes an interest in matters of state! 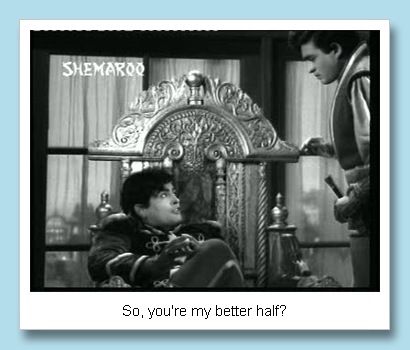 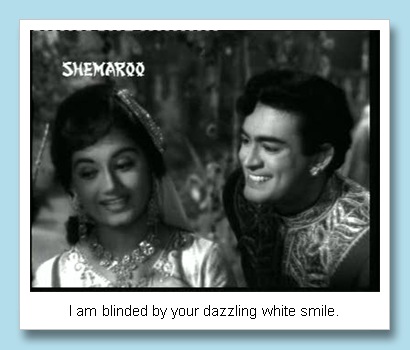 Sangram Singh is informed by Badal’s friend (Mukri) that Badal disappeared into the Ajitgarh palace. Sangram rides into town to investigate. He is quickly captured by Mansingh, but released by the 'Prince'. Kiran refuses to let Badal go off with his father. He intends to use Badal to free him from boring royal duties by impersonating him on such occasions. The two Princes are then let loose on the household simultaneously, leading to much confusion. 'Prince Kiran' appears sober and sweet one moment and drunk and nasty, the next! The mystery is solved soon enough, when the Rajmata (Kiran’s Mom) and Mansingh discover Badal’s existence. 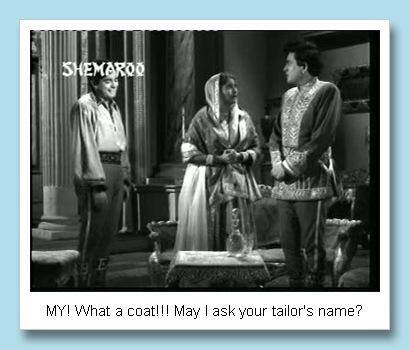 The Rajmata, who was told that her second son died in birth, is convinced that Badal is her not-so-dead son. And Mansingh isnt long in figuring that out, either. By the time Kiran catches on, he has clearly caught up with Dumas’s Man in the Iron Mask. He promises his weeping mother that he wont kill her other son, and promptly claps an imprisoned Badal into an iron mask! 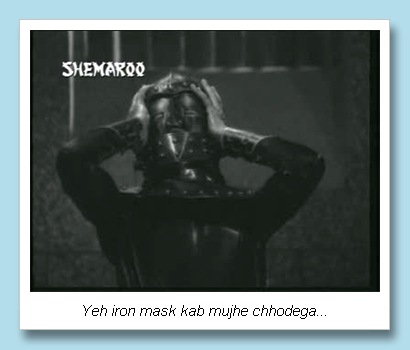 Whew! I have missed quite a bit of other plot details, but you must admit that this is already a lot to happen when the film is still far from THE END. Need I tell you that Badal WILL escape, that there WILL be lots of badly choreographed sword fights, several twists in the tale, and loads more swashbuckling fun? If you consider that spoiler-ish, then wait till you watch this several-in-one film – everything is predictable and yet unexpected! 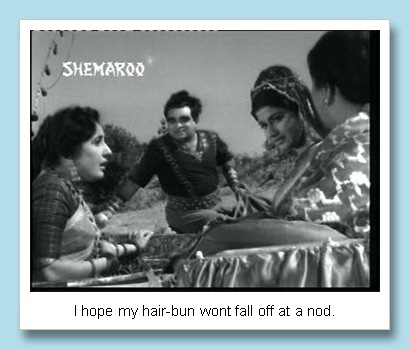 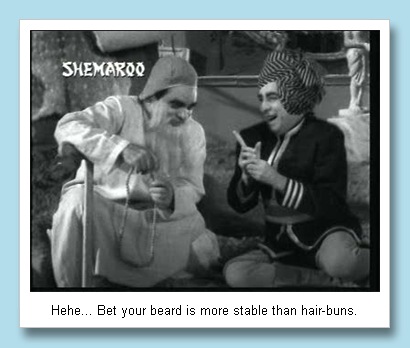 Sanjeev Kumar gets in some serious scenery chewing – a must for any respectable swashbuckling hero. And since this is 1965, he is very, very good looking, too – lipstick and earrings and all. Nazima and Helen were lovely, though neither of them got as much screen time as the “two” heroes did. My favorite, though, was Prem Chopra. As Vikram, he didnt have a lot of screen time, but it was a fun part and he looked so dashing and handsome that I wished that he were the leading man instead of Sanjeev Kumar. But that would have played havoc with 70s Bollywood – how could the 70s have done without the nasty, villainous, Prem Chopra?! 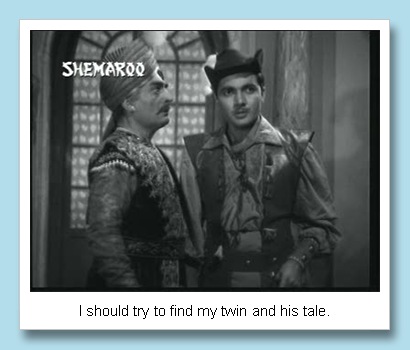 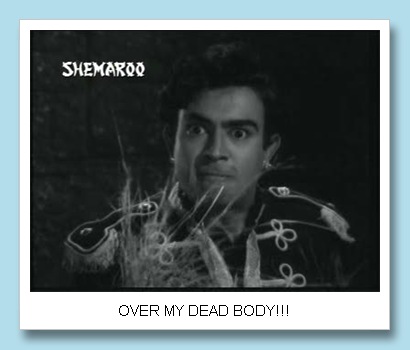 There’s just so much to enjoy in this film, and I bet that you’ll think so, too! So go watch it…