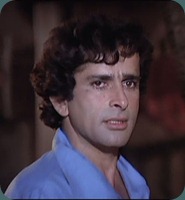 Yes, its that time of the year when Beth announces a Shashi-fest and the rest of us rush to celebrate! This year, I’ve gotten my hands on something rather unusual - a newly discovered Shashi Kapoor film! Thats hardly unusual, you might say. The guy never refused a film, so one is always stumbling across "new" Shashi films, all over the place. Well, this one is a masala-swashbuckler-cum-thriller-cum-everything else – nothing less than a "new" Manmohan Desai film, in fact! Yes, I can see that you are about to bring up Aa Gale Lag Ja and Suhaag and tell me that there’s nothing new about a Shashi-Manmohan Desai collaboration.


Hear me out – this film IS rather unusual. Its more than ordinarily unknown. The film was never released for some reason, and only one copy has survived. Luckily for me, I was able to trace the owner of the last surviving copy - Mr. F. Khabarwala. A collector of old films, (and a big fan of Shashi, of course!), Mr. Khabarwala was only too happy to share this filmi treasure. But that isnt the only thing I am excited about. He also has a treasure trove of contemporary news and behind-the-scenes incidents about the film, which he also graciously shared with me. 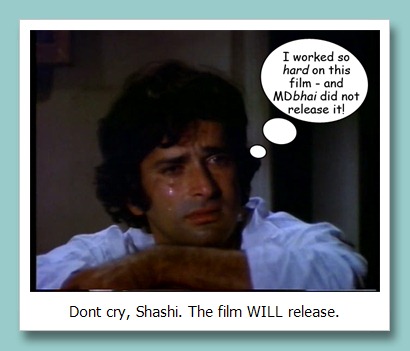 The well known industry-mag FilmiAffair had apparently got their best reporter - Filmi-eye - to shadow the masala-King throughout the film. The result was a series of articles that included interviews on the sets, as well as Filmi-eye’s eye-witness account of the film’s progress. But Mr. Khabarwala has more – he also has Filmi-eye’s written notes from the shooting and interviews! Yes, you’ve got it – Mr. Khabarwala IS (or rather, was) Filmi-eye!!! The articles themselves, and his copious notes (not to mention, his almost photographic memory) offer a marvellous peek into what goes into the making of a filmi masala-feast, Manmohan Desai-style.


So, with the help of the ex-Filmi-eye, this week, I will reconstruct the making of this lost masala-gem, for our mutual pleasure. Starting from how Manmohan Desai (hereafter referred to as Maestro or MDbhai) came up with the idea, right down to the finished product, we will take a peek into every aspect of this film’s remarkable journey – a journey that includes enough Shashi to make this a worthwhile Shashi-week project, I assure you. I hope you enjoy it as much as I know I WILL! 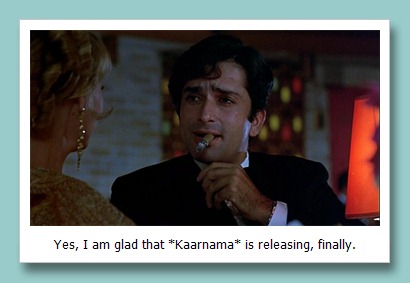 Coming up next – MDbhai was inspired by Alfred Hitchcock’s masala-thriller North By Northwest.
Last year’s Shashi-week: on Old is Gold, Beth Loves Bollywood and elsewhere in blogland.


Edited to add:
Kaarnaama - a feat, an exploit, or an achievement
Khabarwala - Khabar=news, ergo, Khabarwala=man who brings news (not always a reporter!). And Mr. Khabarwala's first name is of course, Filmi!
Posted by Bollyviewer at March 15, 2010