Kaarnama (1979) – an interview with Manmohan Desai 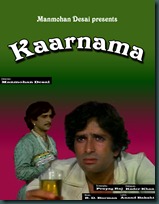 Yesterday I told you about this Shashi- treat that I stumbled across, quite recently. The film was launched in 1977, and right from the mahurat, Filmi-eye had a bird's-eye view of the proceedings. The film took a while to complete, since MDbhai's finances came in fits and starts and dictated a rather scattered shooting schedule. But Filmi-eye was tenacious, and always made a point to catch up with what was happening with the film. He was convinced that this film would be the last word in masala-movie-making and stubbornly clung to this belief, inspite of all the trouble the film attracted. I went through all his Kaarnama write-ups for the next few years to compile a story that makes sense with 20/20 hindsight. There was delicious gossip (too scandalous to be repeated here!) and lots of speculation that wasnt actually borne out by subsequent events - I've used the editor's scissors on those bits. To fit it into a week’s worth of blog posts, I’ve had to edit some of Filmi-eye’s delightful prose, too. Hopefully, the unedited story of Kaarnama will make it to print, one of these days (publishers, are you reading?). In the meantime, here is the lite version, in Filmi-eye’s own words.


The town has been buzzing with rumors of a new Manmohan Desai film. The maestro himself confirmed it, when I met him at the premiere of Dharam-Veer. I was curious about his new venture and MDbhai was only too happy to talk about it. We met up next day and had a nice long chat about it.
F-E: MDbhai, tell me about your new film.
MD: I am aiming for something different from my usual ventures, and the idea for Kaarnama has been with me for a few years.
F-E: So is it something along the lines of your socialistic Roti?
MD: No no. This time, I am aiming to entertain. Kaarnama is based on one of my favorite Hollywood masala films – Hitchcock’s North By Northwest. When I saw it a few years ago, I knew I had to make a Hindi version. So Prayag [Raj], Kader [Khan] and I got together to talk it out. Its taken us a few years to hammer out the script, but now we are ready to roll.
F-E: North By Northwest! Wow! So who’s playing the lead?
MD: We’ve got Shashi Kapoor in a double role and Sharmila Tagore plays one of his leading ladies. The second leading lady has yet to be cast.
F-E: A double role? But there is no such thing in North By Northwest!
MD: My dear man, good and evil are but two sides of the same coin. The same face can hide a good as well as a bad character. Rememember Rajesh Khanna in Sachcha Jhhutha? Shashi in Haseena Maan Jayegi? We will show up the dichotomy of human character by casting the same actor as the hero and villain.
F-E: And two heroines? There was only one major female character in North by Northwest!
MD: Yes, well… I’ve always thought that Hitchcock didn’t have enough women in his films. I intend to correct that oversight.
F-E: So you are abandoning your patented lost-siblings and suffering Maa formula?
MD: Of course not! Do you honestly think a Maa can have twins and not misplace at least one of them? Tsk tsk tsk… the filmi court will slap a contempt-of-court notice on me for ignoring filmi laws like that.
F-E: So Nirupa Roy will chalk up another misplaced son, then?
MD: Filmi… this movie is different, hatke you know, from my regular films. I am going for more realism, without cutting down on the entertainment quota.
F-E: So Nirupa wont misplace a son, then?
MD: That would be telling! It’s a thriller, for goodness’s sake! If the whole plot is revealed even before the film is made, who would watch it?
On the rumors about a spat with his favorite star, MDbhai was emphatic that they were still good friends.
MD: These rumors are started by malicious people. Amit and I are still working together on a couple of other projects. This role was right for Shashi, and he didn’t think twice before signing on.
F-E: Whose idea was it to cast Sharmila as his leading lady? Yours or Shashi’s?
MD: Shashi left that entirely up to me. I had really enjoyed working with Sharmila on Aa Gale Lag Ja. And Shashi-Sharmila had such great chemistry there – I mean, did anybody question their having a baby out of hypothermia? Nope. Their chemistry was such that audiences happily lapped it up. So she is the first person I thought of, once Shashi said yes to Kaarnama.
F-E: So Sharmila will do the Eva-Marie Saint part. What role does the other leading lady get?
MD: It’s a very important role, and will require some dancing skills. I cant reveal anymore, but we should finalise the second leading lady before the mahurat.

Filmi-Eye and Manmohan Desai then went on to have a long conversation about films and contemporary film stars, which isn’t relevant here. Tomorrow, we’ll spend some time on the sets of Kaarnama, and get to know something more about the plot. And yes, we will discover who the second leading lady is.
In the meantime, does any of you care to speculate who lands that part? Is it Zeenat Aman, Rekha, Neetu Singh, Hema Malini? Or is it Aruna Irani or Helen? Or someone else? Who do you think MD chose? Lets see if your choices match MD’s.
Explanatory notes:
hatke: different, away from the norm
muhurat: Auspicious time or day, when the first shot of a film is taken