Its been a week long marathon of 70s movie goodness, and a festival of fun and funkadelic delight. But whats a festival without an awards night? Considering how much hard work, time, and effort went into the making of a 70s film, it is only right that the people involved be recognised for their good work. So, we end the festival with the Masala Awesome Awards – or MAAs. The festival committee decided to call in an expert jury to judge the entries and pick the awardees. The jury consisted of a panel of distinguished film critics – Bollyviewer, Bollyviewer, Bollyviewer and Bollyviewer. With so much material to choose from, the judges had a hard time deciding between the candidates. You’ll realise just how much talent the 70s encompassed, when I tell you that the list of nominees for some awards ran into hundreds. After long deliberations, the judges finally made their choice. So lets see who gets to take a MAA home, tonight.

The popular MAAs
Best use of wigs (female): The judges wavered between Babita and Hema Malini, since both actresses were devoted users of this technique to hide part of their faces (unlike the miserly Manoj Kumar who used his palm, instead). But finally, Hema’s longer career-span and continued use of a large variety of wigs, won the day. As the dream girl walked on to the stage to pick up up her award, loud clapping and cheers greeted her latest hair concoction. 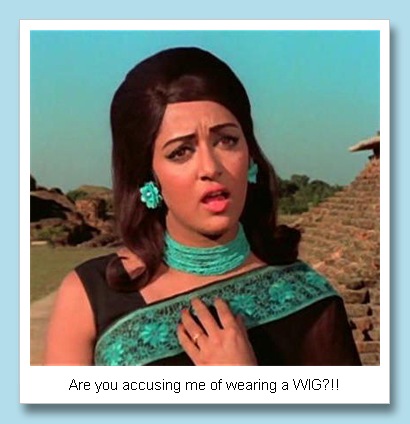 Best use of wigs (male): This was a tough one. Rakesh Roshan’s nostril-action shines through his ugly wigs, and Sanjeev Kumar’s “GABBAR!” comes swinging straight at you, right out of a thickly-thatched silver toupee. But weigh this against PRAN - he who has made the wig his own. White wig, black wig, yellow wig, red wig, ponytail wig, you name it and he’s worn it. Naturally, the better man won. Lets see which one of his delightful toupees he wore to the ceremony: 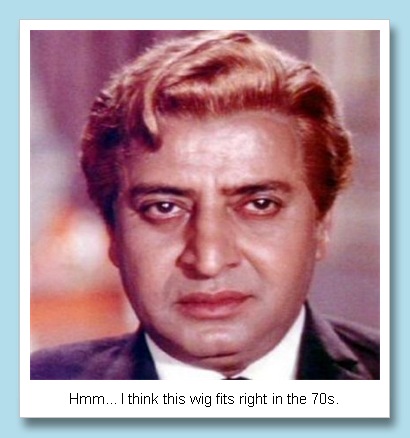 Best dimples of the decade: The judges were bitterly divided over this. Half the committee was in favor of Sharmila Tagore and the other half held out for Shashi Kapoor. After several hours of acrimonious debate, a compromise was struck – the best dimple of the decade MAA goes to the Shashi-Sharmila pairing for their pioneering work in the his-n-hers dimples department. 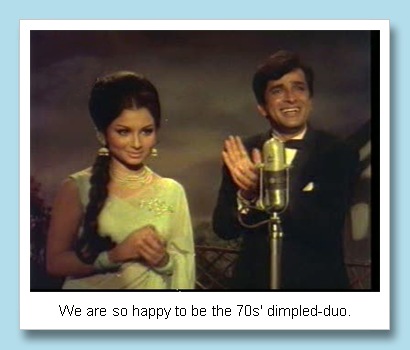 Best costumes of the decade: The judges were much inclined to favor Helen since she has been largely instrumental in bringing gold and silver lamé as well as glitzy make-up, not to mention, frilly costumes, to the attention of the public. But one look at the costumes of Dharam Veer, and the judges forgot all about Helen. Here was sheer genius at work. To make leading men wear mini skirts and frilled shirts without any just cause, the judges felt, required the courage of strong convictions. So, this MAA went to designer Manmohan Desai. Insiders say that he is too modest to take credit for either his costume or set and interior designs – hence the fiction that he hires designers and art directors. But the judges were determined to give recognition where recognition was due – and MD had to take it! 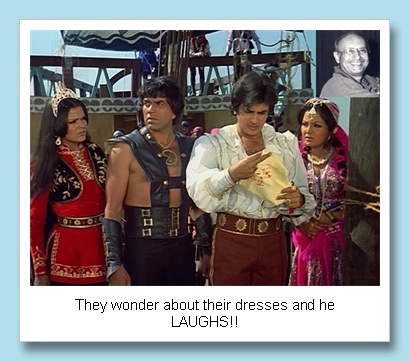 
Best actor in a female role: With so many candidates clamoring for attention, it wasnt easy to decide on this one. Should it be Rishi for Rafoo Chakkar? Should it be Rajendra Nath or Mehmood – those veterans of cross dressing who played female roles almost all throughout their careers? Nah! The choice ultimately fell on Paintal for Rafoo Chakkar – he was so convincing as a woman that even Rajendra Nath, an experienced cross-dresser himself, fell for him! 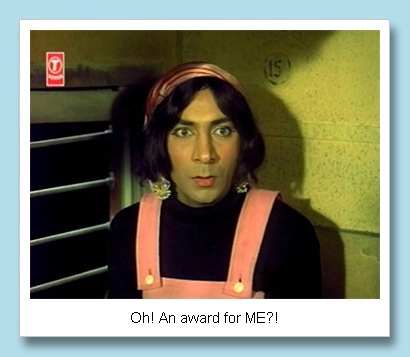 
Best actress in a male role: Tanuja in Do Chor, was the clear winner. She made a very handsome chor, and held her own in the face of stiff competition from super-handsome co-star Dharmendra. 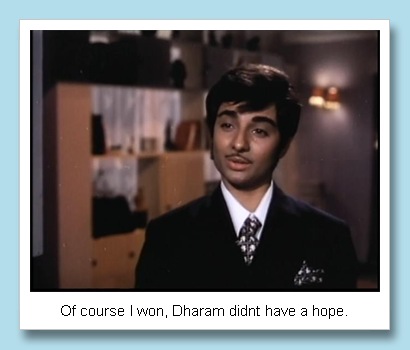 Best pout of the decade: No competition at all! There is only one pout in the entire decade, and that is… YES – Mumtaz! 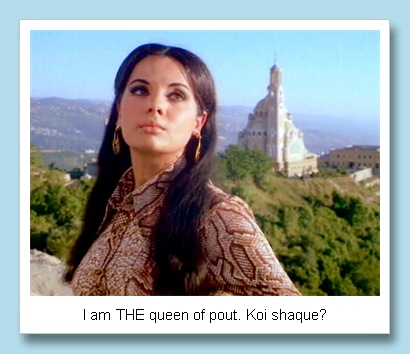 (image taken from Bollywood501)
The (more serious) Critics’ MAAs:
Best actor (tight pants category): Again, the judges were swamped with candidates. The 70s were the best decade for tight-pant action and it was a tough choice. In the end, the judges went with OiG favorite Vinod Khanna, because they felt that while Amitabh and Shashi Kapoor showed off tight pants equally well, neither of them scenery chewed with as much dedication as Vinod Khanna did. 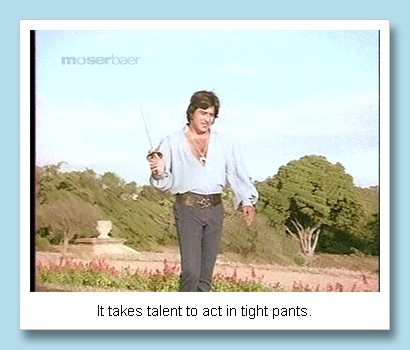 Best actor (mini skirt category): While every actress - from Zeenat Aman to Neetu Singh and Dimple Kapadia to Rekha - has gracefully worn miniskirts, there is a general consensus in Bollywood that nobody shows off to better advantage in mini skirts than Garam Dharam. The judges were inclined to agree. Don’t you? 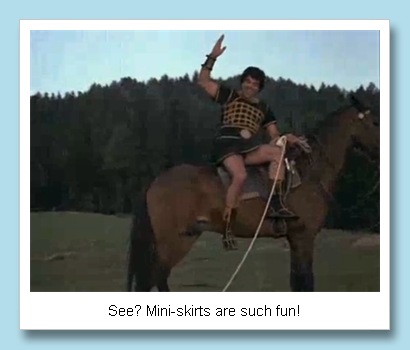 Most careless mother: The judges didnt take even a minute to decide this award - the choice was spontaneous and unanimous! You’ve probably guessed it – Nirupa Roy. She had a decided talent for losing her sons, all throughout the 70s. The lost kids usually grew up to be Amitabh Bachchans. The judges did wonder if she wilfully misplaced her sons because she had second sight and could see what older Amitabh would get up to, and this was her way of saving the world. 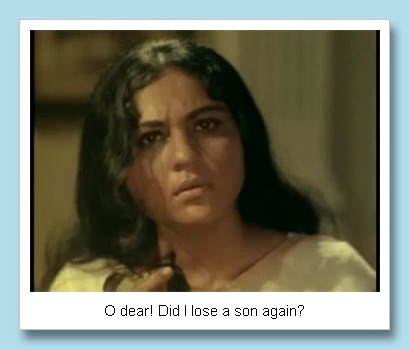 Best original story: What was the most original, the most intelligent, and the most interesting story of the decade? Undoubtedly Sholay. The judges felt that Salim-Javed had done an excellent job of remaking Mera Gaon Mera Desh, right down to rhyming their villain’s name (Gabbar Singh) with that of MGMD (Jabbar Singh). Such originality, the judges felt, is rare in Bollywood, and deserves due recognition. 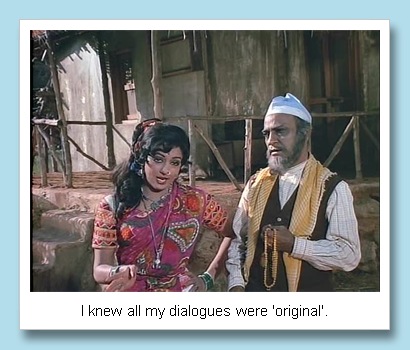 Most talented musician: No its NOT R. D. Burman! Even the judges were surprised at the results of their investigation. The most talented musician was… ZEENAT AMAN! Yes, its true! Just see how well she strums the guitar in Chura liya ha tumne jo dil ko (Yaadon ki Baraat), how beautifully she plays the piano in Uljhan suljhe na (Dhund), and her singing is divine – check out Do lafzon ki hai dil ki kahani (The Great Gambler). Not even Pancham can compete with such all round musical talent. Zeenie Baby has certainly earned her MAA. 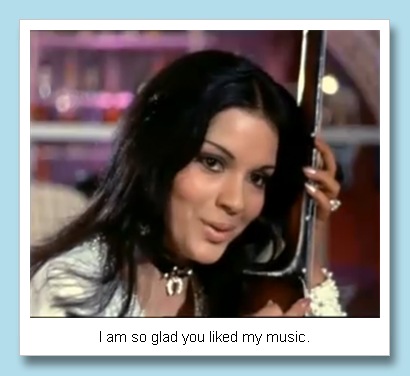 Best director: This was a difficult one, since 70s had so many talented directors who could take a lovely cast and an interesting story, and turn it into a terrible film. In fact, the judges found it so hard to come to any conclusion that they resorted to picking out a name at random, and their choice lighted on A. Subba Rao for his 1971 classic Rakhwala. Its a film famous for wasting Garam Dharam, sizzling Vinod Khana, lovely Leena Chandvarkar and lots of masala. 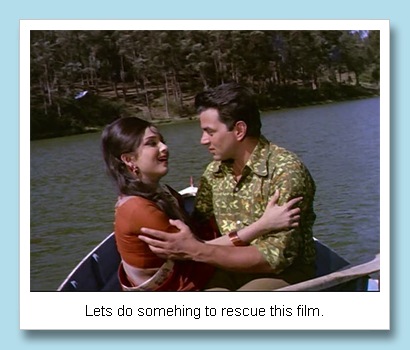 Grand Finale: The Golden MAA, awarded for all-round excellence in the decade
The ceremony ended with the much anticipated Golden MAA. The judges thought long and hard about this, but finally decided to go with their first choice: Shashi Kapoor. It was felt that since the man had publicly declared his preference for MAA over money and material things, he was the most deserving candidate. Shashi was wreathed in his mega-watt smiles as he came onstage to pick up his MAA. “I will do my best to deserve every possible MAA, and work hard to achieve my goals”, he confided. Aww Shashi… the judges were so moved by the nobility of his sentiments that if they hadnt already awarded the rest of the MAAs, they would have handed them over to him, there and then! 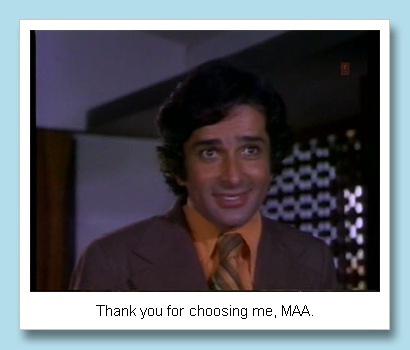 There were several more MAAs awarded tonight, than I’ve listed here. But if I’d gone on to list everything, we’d be here for several more hours! So I’ve just listed the important ones. Dont forget to remind me of any of your favorites that I’ve failed to include.
Posted by Bollyviewer at March 01, 2010