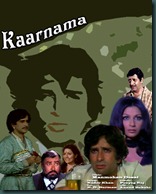 Now that you’ve gotten all the preliminary chatter about Kaarnama, its time for you to “see” the movie. I’ve thought about how I am going to put Fimi-eye’s reminiscences and the plot synopsis together, and decided to go the simple way. I’ll give you a scene-by-scene account of the film, and work in the most interesting stuff that went on behind those particular scenes. That way, you can appreciate MDbhai’s masala genius and Shashi’s professionalism, all in their proper context. And since the film follows a linear narrative, flowing in a straightforward, chronological order, that’s how we will talk about the making-of incidents too, ignoring their real-life chronology.

The film opens with two young children – obviously identical twins - receiving a joint first prize at school. They are gifted a copy of the Bhagvad Geeta, which they divide into two parts, in the interests of equitable distribution. After the prize-giving ceremony, the kids happily run home to play. They play hide-n-seek in their barn which is stacked high with ominous looking crates. While Bittu (Master Tito) looks away, Bunty (also Master Tito) hides in one of the crates, and pulls the lid in after him. 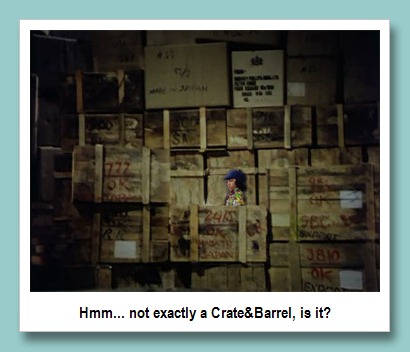 In a 70s film, a barn stacked with large crates could mean only one thing – smugglers! And sure enough, the twin’s father, Dwarkanath (PRAN!) has a meeting with some of Boss’s henchmen, right then. They’ve come to take delivery of the latest crate-load of rice that is to be shipped to vilaayat. Yes, evil smugglers are taking rice out of the mouths of starving babes and selling it to the evil foreigners who will make delicious cakes and breads out of it (after its been milled by Indian slave labour, of course). It was pointed out to MD that cakes and bread are usually made of wheat, not rice flour, and with the dismantling of the British Raj, Indian slave labour is very hard to come by, for the evil firangis. MD’s reaction? “If you get bogged down in such small details, you’ll never get the bigger picture!”


The crates are duly locked and loaded onto trucks, including the crate bearing Bunty. Bittu hides when his Dad’s colleagues come calling, but once the barn has been emptied, he is shocked to find Bunty gone, as well. It doesnt take him long to figure out where his doppelganger went, and he swiftly informs his father. Dwarka gets on his motorbike and chases the crates. He gets on the Vashi bridge, just in time to see the truck crash into the sea. Fearing that his Bunty will soon be part of an aqueous solution, Dwarka jumps in. He is hit by the floating debris and looses consciousness. When he wakes up sometime later, he’s in a fisherman’s cottage, with his memory completely gone. He does not realise it yet, but we do, that he is now in Pakistan! 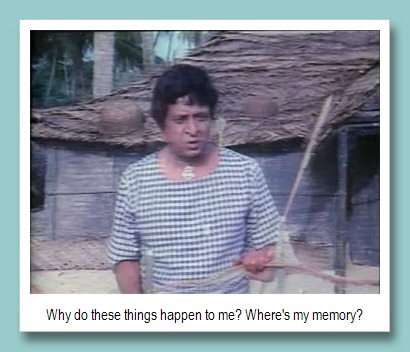 In the meantime, Bittu rushes home to Maa - Parvati (Bindu!) - to tell her what happened. The poor woman has barely got time to make her NAHIIN!!! face, when the news of her husband’s watery death is brought home to her. Poor Parvati… she collapses in a dead faint. MD actually told Bindu to be sad for Bunty and even sadder at losing her suhaag, but she had given her all in the first NAHIIN and couldnt crank it up any higher. MD was all praise for her ingenuity in fainting, thereby proving her extra-shocked condition. Said Bindu about this remarkable director. “He lets an artist experiment, and listens to the actor’s inputs. Its a remarkable experience working with him.” 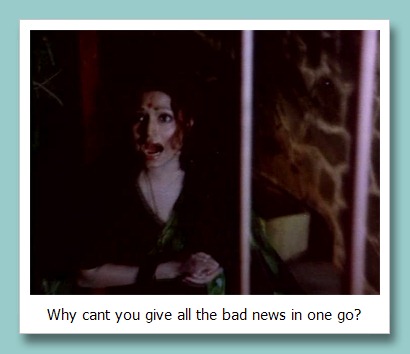 Filmi-eye tells me that Nirupa Roy was originally signed on for the Maa role, but she called in sick on shooting day. MD was keen to can the shots and roped in Bindu, instead. Bindu had just dropped in to talk to him about her role in the film, when MD told her to get into a Maa get-up. She was reluctant at first, until MD reassured her that nobody would recognise her in a saintly Maa role. 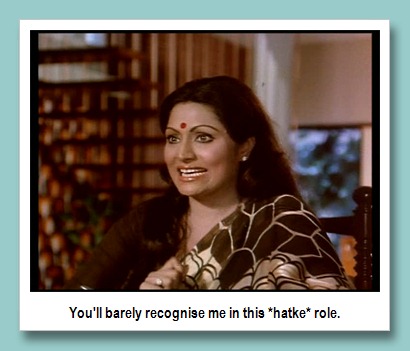 Do we know what happened to Bunty? Is he really as dead as his brother and Maa seem to think? Of course, not! Strange is the working of fate. When the crate-truck rushed to meet the sea, the Bunty-crate rolled on to a passing truck. In a twist of fate, the truck contains the worldly goods of the Mehra family who are moving abroad. So the Bunty-crate makes it to vilaayat with them. Sharmila Tagore was shocked when she saw this sequence, later. “That crate has no holes! The child will suffocate on the long journey to UK,” she protested to MD. “Mothers watching this scene will be as horrified as I am!” MD saw at once that she had a point. Besides, he wanted to silence his critics who claimed that he made very unrealistic films. So, a close-up of the crate, with holes cut in it, was inserted into the sequence.


Once in vilaayat, Mrs. Yashoda Mehra (Achla Sachdev) discovers the child in their personal effects. She and her husband Brij (Shammi Kapoor), had been longing for a child, and promptly adopt Bunty, whom they call Shyam. Shyam pines for his Maa and his brother, but when inquiries in India are unable to locate his family (Maa and Bittu left town after their loss), he decides to be a dutiful Shyam to his new Maa. 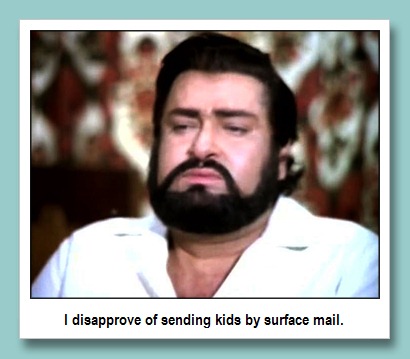 I apologise for the lack of good screencaps. The film is not available in digital format, so all I have is a few stock photos from Filmi-eye’s collection. Of course, once it was clear that the film would be stalled indefinitely, MD recycled some bits in his other films. Plus, Filmi-eye tells me that when Shashi ran out of hours in the day to shoot for all the films he’d signed up for, he’d usually get the directors to recycle bits from his permanently stalled films. So, one way or the other, some of the scenes are quite familiar!


Tomorrow: The kids grow up to be SHASHIs involved in international espionage. Shashi decides to bring method acting to his performance, and Sharmila talks about acting and her experience on the sets. AND the mysterious second leading lady!

vilaayat: foreign land, usually refers to England in the context of vintage Hindi films
firangi: foreigner
suhaag: a woman's good-fortune, i.e., her husband
Previously on OiG about Kaarnama – discovery of a new film, interview with the director and a bromantic break.