Bollywooddeewana’s awesome Dharam week posts, and Daddy’s Girl’s fabulous 5 Decades of Garam Dharam post on the occasion of Dharmendra’s birthday, reminded me of my favorite lead pair – Dharam and Sharmila (or Dharmila as Daddy’s Girl calls them!). Co-incidentally, the two share the same birthday! What better excuse could I have, for re-watching some of my favorite Dharam-Sharmila films? They are both so gorgeous and have more great films together than any other favorite lead pair of mine. This one tops my list of favorite Dharmila films along with Chupke Chupke - both directed by Hrishikesh Mukherjee. While Chupke Chupke is classic comedy at its best, Anupama (The Incomparable One) is the coming-of-age story of a timid and shy young woman. 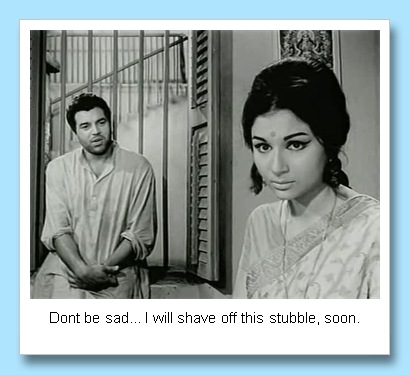 Once upon a time there was a very happy couple – Mohan Sharma (Tarun Bose) and his new bride Aruna (Surekha). They were deliriously in love with each other. As happens with deliriously happy couples in Bollyland, they are soon expecting a baby. This does not turn out to be the good news that we might expect - complications during the delivery end Aruna’s life. The baby daughter survives, and is called Uma. Mohan, inconsolable in his grief, blames poor Uma for his wife’s death, and hates her. She is brought up by Sarla (Dulari), Aruna’s nurse, virtually out of his sight. 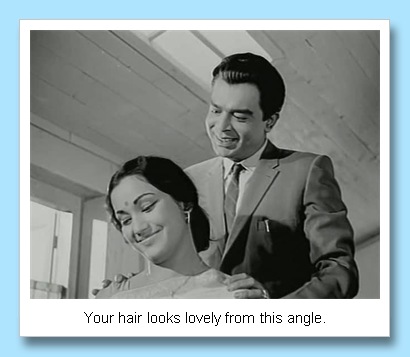 In his grief, Mohan becomes a workaholic by day and a drunk by night. While sober, he makes his dislike of Uma very plain, but in his drunken moments, he lavishes gifts and affection on her. With such a Doctor Jekyll and Mr Hyde for a father, its no wonder that Uma grows up to be a very withdrawn and timid young woman. She barely speaks and is terrified of most people. 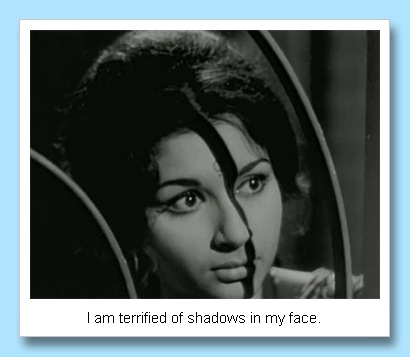 When Mohan is invited to visit Mahabaleshwar, to recover from his alcohol-induced illness, he takes Sarla and Uma with him. At Mahabaleshwar, they stay with his friend Suresh Bakshi (Brahm Bhardwaj) and his manically cheerful daughter Anita/Annie (Shashikala). Suresh, like Mohan, lost his wife soon after Annie was born. But the contrast between Annie and Uma couldnt be greater. Annie has all the confidence and natural exuberance of a much loved child. Uma, on the other hand, has all the timidity and lack of self-esteem that comes of knowing herself unwanted and unloved. 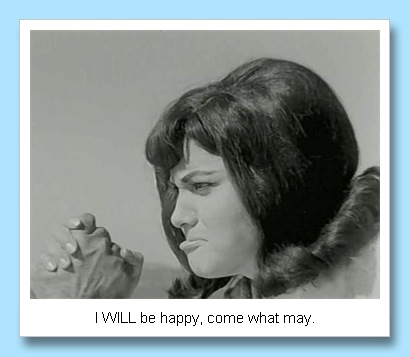 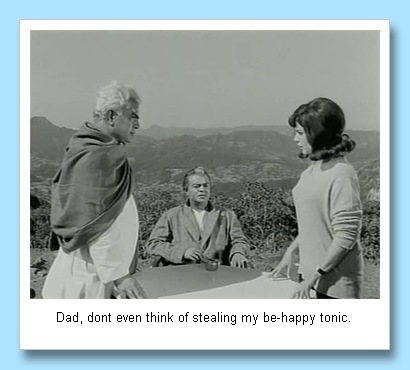 To Mahabaleshwar also come Ashok (Dharmendra), his mother and sister, and his friend Arun (Deven Varma). Ashok is a poor and idealistic teacher, struggling to support his vidhwa Maa (Durga Khote) and kunwari behen Gauri (Naina). Arun is a vilaayat-returned engineer, and son of Mohan’s late friend. Mohan has plans of getting Uma married to Arun. Knowing of Arun’s connection with Mohan, Annie promptly invites him and his entourage to stay with them at their gigantic villa. This is where Uma’s life begins to change. 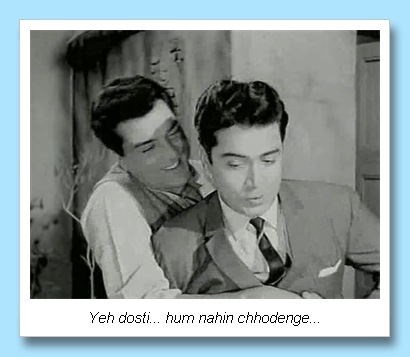 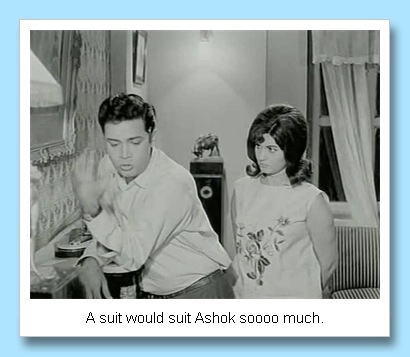 Ashok, the sensitive poet-writer, is drawn to the shy and quiet Uma. With gentle perseverance, he tries to bring her out of her shell. His Mom and sister also develop an attachment to Uma. She basks in the warmth of her first real friendship and begins to fall for Ashok (and who can blame her?). Ashok pursues his acquaintance with Uma when they return from Mahabaleshwar (atta boy!), and succeeds in getting her to utter her first few words in the film! Cautiously, Uma begins to reach out to him and his adorable family. Their blossoming romance is a joy to behold. Inspired by her, Ashok writes his novel Anupama – a book that will subsequently help determine the course of their relationship. 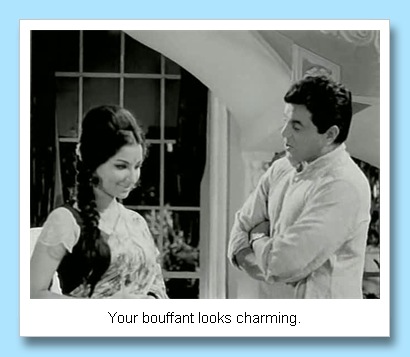 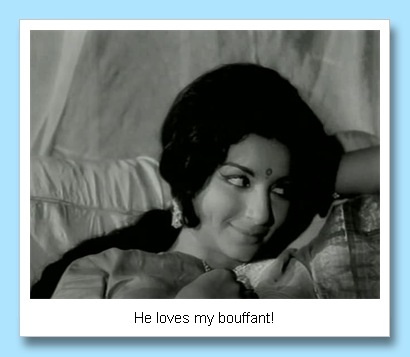 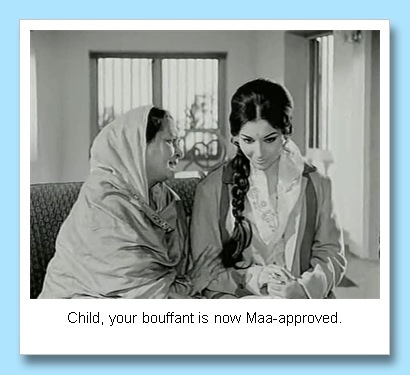 Ashok-Uma’s is not the only romance brewing. Arun is drawn to Annie – once he’s got over his initial shock at her manic cheerfulness! Annie is equally drawn to Arun. The cheerful and young-at-heart Uncle Moses (David), fosters their relationship and encourages them to plan for marriage. But Arun is promised to Uma! Try as he might, he cant work up the courage to tell Uma’s intimidating father that he wants to marry Annie. 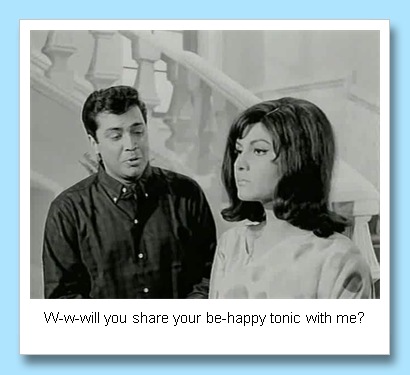 What happens to these tangled relationships? Do Ashok-Uma and Arun-Annie find their happily-ever-after? Will Uma let go of a lifetime of striving for her father’s approval and strike out for her own happiness? Will Annie stop overdosing on her “be cheerful, be perky” tonic? I suggest you watch the film and find out yourself! 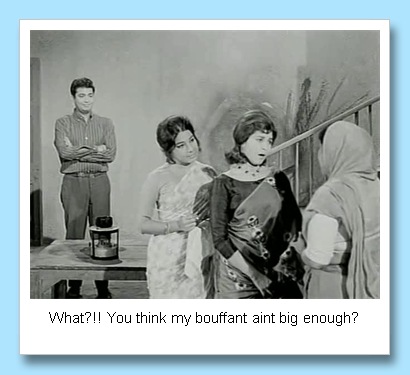 Its a lovely film with a beautiful story, satisfyingly well told – all the hallmarks of a good Hrishikesh Mukherjee film! The characters are very believable and the film depicts them all so sympathetically. The stunning black and white cinematography adds depth and feeling to the emotions swirling through the film. On a more frivolous note, there is so much pretty in the film. From the gorgeous lead pair to the beautiful Shashikala and handsome Deven Varma – they are all so beautiful! Plus, it has the best music out of all of Hrishi da’s films. Check these out: Lata’s joyful Dheere dheere machal and lovely Kuchh dil ne kaha; the exuberant Asha numbers Bheegi bheegi fiza and Kyon mujhe itni khushi de di; and Hemant Kumar’s haunting Ya dil ki suno duniyawaalon. 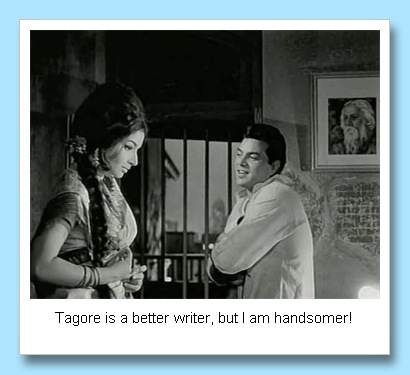 Dharmendra is superb as the principled and sensitive writer. Not once does he go over the top. Even his “we are poor but happy” speech sounds sincere and heartfelt, rather than filmi. His character is also very well written. I loved that though Ashok does his best to woo Uma and give her some faith in herself, he also gives her room to grow and make her own decisions. 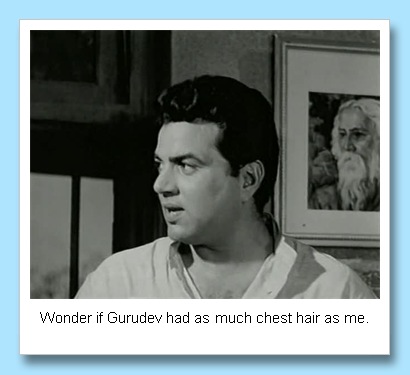 Sharmila is equally good as Uma. Uma barely speaks in the film, yet Sharmila manages to convey Uma’s silent fear of her father, her striving for his approval, and her growing satisfaction with Ashok’s affection (Sharmila makes full use of her dimples to convey half-smiles as only she can!). However, I do wish she’d left off her bouffants as Hrishikesh Mukherjee apparently requested her to. The well-coiffed hair add a touch of glamour that detracts from Uma’s quiet and simple character! 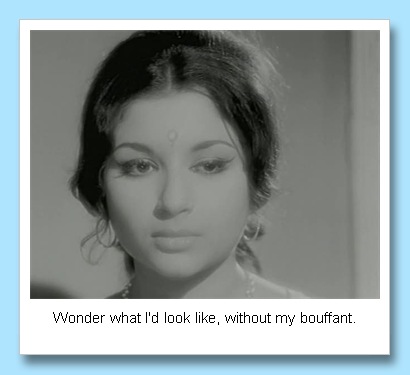 Of the rest of the cast, I found Shashikala’s Annie rather grating. Her bubbly enthusiasm and cheerfulness was very, VERY overdone, especially since the rest of the cast put in a pretty understated performance. My favorite, apart from the leads, was David. He was utterly charming as the jocular and fun Uncle Moses and had just the right mix of avuncular and friendly to make him the best confidante in matters of the heart! 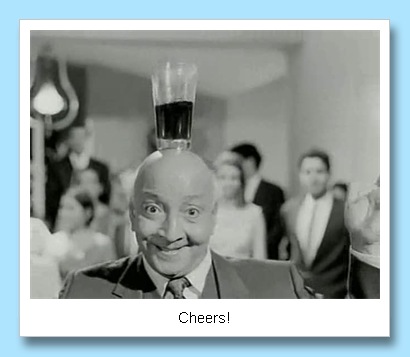 Interestingly, according to this write-up on Stardust, the film was inspired by a real-life Uma!