MEN, BEWARE! If you accidentally soil your new suit at a party, do NOT go into the nearest bathroom for emergency repairs. That way lies seduction, alcoholism, drug addiction, etc. - in fact all the makings of a ruined life! This can happen to the saintliest of men, as you can see in Mr. Romeo. So do take care! 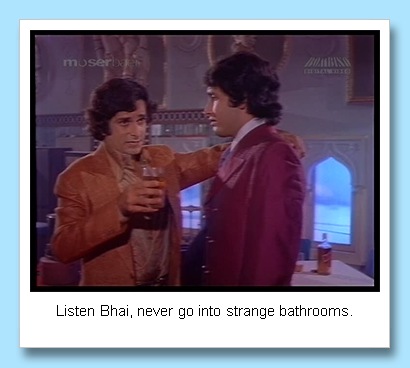 It all began when hardworking businessman Mr. Saxena (Utpal Dutt) asserted his principles. But it did NOT end with his son entering the bathroom of doom! One fine day, Saxena comes across Joginder Pal shooting a policeman. Joginder’s father, Pal (Rajan Haksar), is Saxena’s good friend. Pal pleads with Saxena to save his son from the murder rap. Saxena, however, chooses to go with the truth on the witness stand, and Joginder is hanged for murder. Pal blames Saxena for his son’s death, and with his son Prem (Narendra Nath), vows revenge. So, he plays the ‘your testimony killed my son so you are my best friend’ game with Saxena, while plotting a convoluted vendetta. 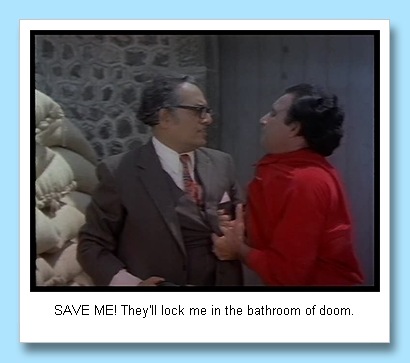 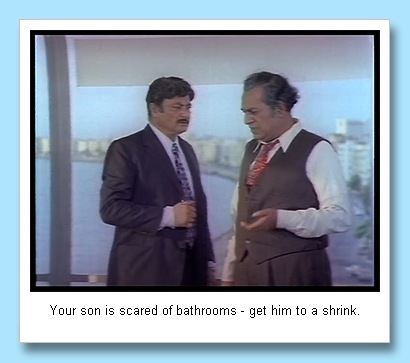 Coming to the fun part – SHASHI KAPOOR! YAY!!!! What? Oh yeah, we were talking about the movie, before I got distracted by Shashi. The upright Mr. Saxena’s elder son is Ramesh Saxena (Shashi Kapoor), a playboy given to abusing banned substances (nobody could be this perky and cheerful ALL the time, without abusing something!) and women drivers. 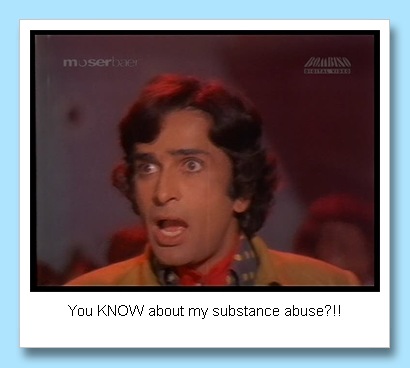 After running circles round three beauties in a trippy 60s-sounding RD Burman number, he gets home for a spot of rest around 5:00am. He isnt back early enough, though, because the household is up. His saintly younger brother Suresh (Kiran Kumar) has passed his exams with distinction, and their generous father has gifted him Rs. 500. 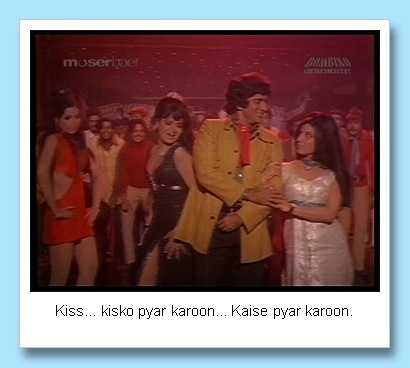 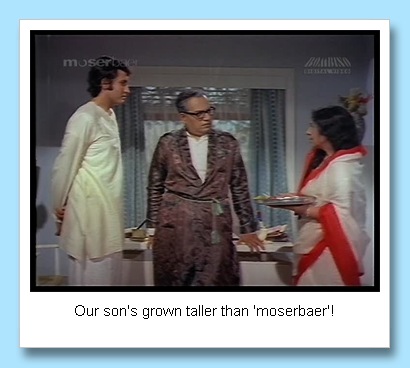 Suresh wants to put his monetary gift in a savings account, but his less than saintly elder bro persuades him to use it for a celebration instead. And thats where the bathroom of doom comes into the picture. But wait! I have missed the romance. Between Shashi, err… I meant “RRAMESH SSAAXENA” (the guy likes to roll his Rrrs and drawl his Ssss), and the bathroom of doom, I keep getting sidetracked! 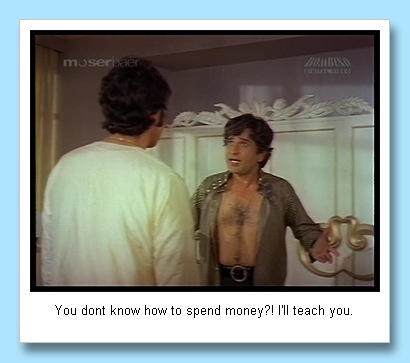 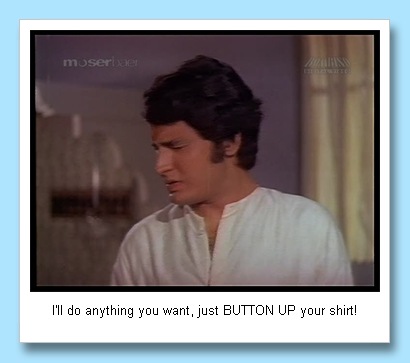 Ramesh’s friend (Viju Khote) wonders why he isnt as popular with the girls as Ramesh is. Ramesh explains that the secret lies in his family wealth. Anxious to score, Viju ‘borrows’ Ramesh’s name and tries to dally with a random beauty. The offended lady screams RAPE and her friend Sheetal (Rinku Jaiswal) vows to teach “Ramesh Saxena” a lesson. Sadly for Ramesh, its he who gets ‘educated’, not his temporary namesake. Sheetal proceeds to head-butt his car (with her jeep, not her head!) and then chases him around the city till his car overturns. A visibly unhurt Ramesh plots a decidedly filmi revenge. 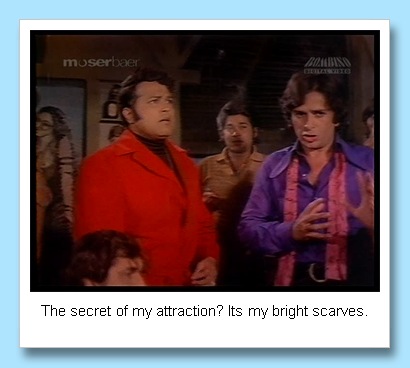 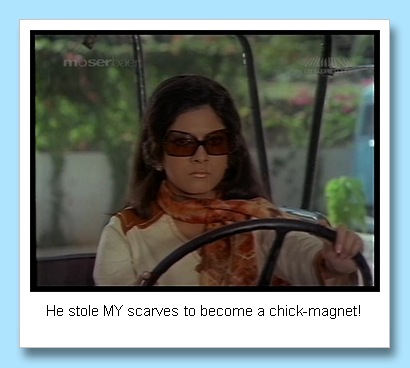 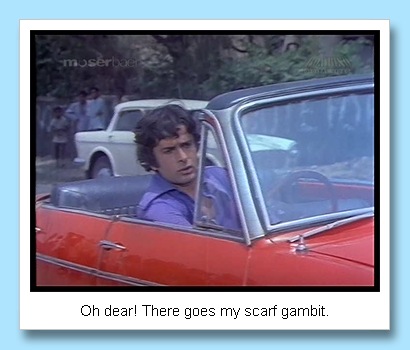 Sheetal is given a message that Ramesh is about to die of his car-related injuries and would like to meet her once. She also finds that it was actually Ramesh’s friend whom she should have car-butted. A regretful Sheetal abjectly apologises to a heavily bandaged and ketchup-ed Ramesh. Of course, Ramesh’s injuries cannot be sustained for long. On her next visit, Sheetal discovers the truth, and runs away after telling Ramesh off for tricking her. 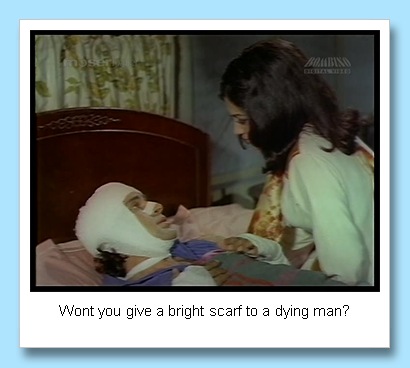 Once home, Sheetal cant get Ramesh out of her mind (join the line, girl!). When she tries to explain to a prospective groom what she wants her fiance to be like, Ramesh’s face keeps popping into her head. Ramesh is a bit quicker on the uptake, and realises that he’s met his Waterloo in Sheetal. Funnily enough, the screen blushes when Ramesh realises he is in love! The two lovers take off for Kashmir where they frolick for a week (looks more like a a few months to me - the weather goes from spring to full blown winter during their trip!). 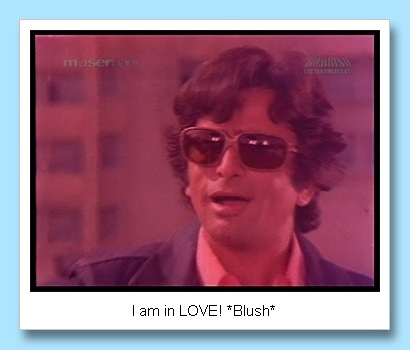 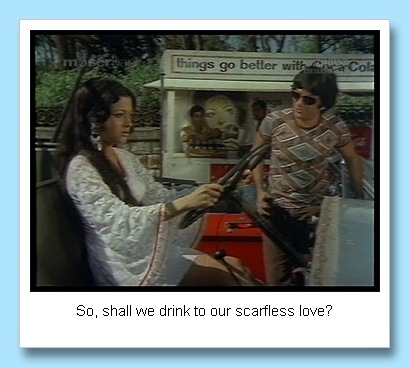 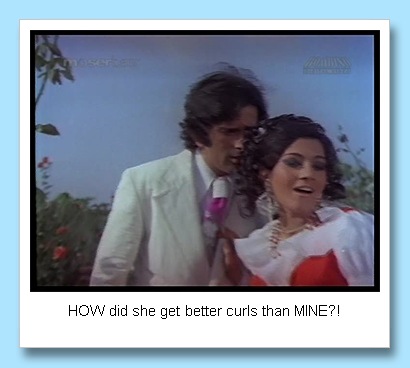 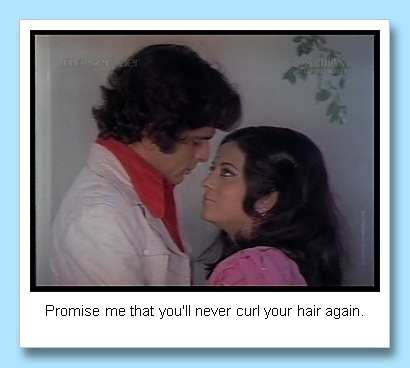 While he was busy extracting his revenge on Sheetal, Ramesh did not neglect his duty toward his younger brother. He threw a party for Suresh at a club, and himself got busy dancing. Suresh, left alone to sit out the dances, met Prem Pal aka Villain Jr. As part of the Pals’ deep dark conspiracy to ruin Saxena, Prem spilt wine on Suresh’s new suit. When Suresh went to the bathroom to clean up, he met the angel of his doom – Shallu (Sarita) – rising like Venus out of the bath tub. Suresh was so disturbed by this sight that he got drunk in his agitation, and alcoholism wasnt far behind. 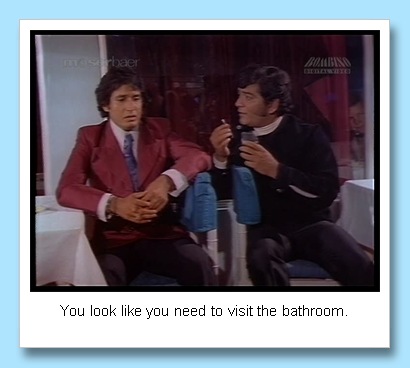 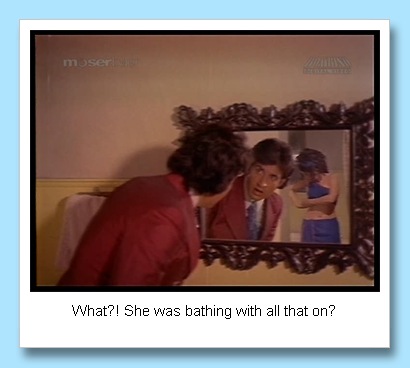 Shallu seduces Suresh and introduces him to alcohol and drugs. Suresh proves himself to be a very quick learner. In the one week that it takes brother Ramesh to return from Kashmir, Suresh manages to become a full-blown heroin-addict and needs to be escorted home from a drug den by his enraged Dad. Daddy Saxena blames poor Ramesh for his younger brother’s descent into drug-induced ruin (hah! He KNEW Ramesh was abusing some banned substances!!!) and throws him out. 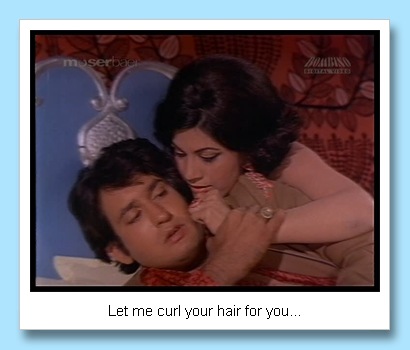 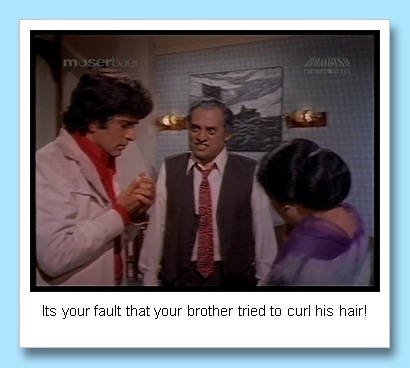 Now its Ramesh’s turn to get drunk. He passes out on a footpath where Raja Dada (Ranjeet) collects rent from the street-dwellers. Ramesh ends up scuffling with Raja but in his trashed state, comes off worse. Thankfully for him, Sheetal rescues him with a tight slap to Raja. The next day she asks Ramesh to relax whilst she looks for work to support them. Ramesh’s macho pride is roused and he decides to use his neglected engineering degree to earn a living. His method of job-hunting is decidedly un-orthodox, but it seems to work! He’s soon gainfully employed and firing unsatisfactory workers in a factory as well as dishooming Raja (who actually turns out to be a good guy!). 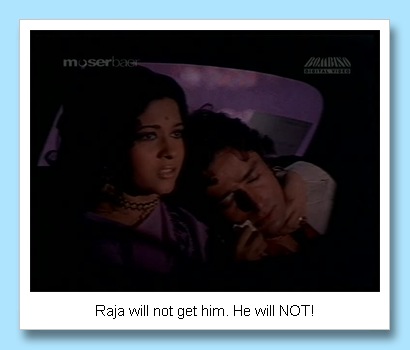 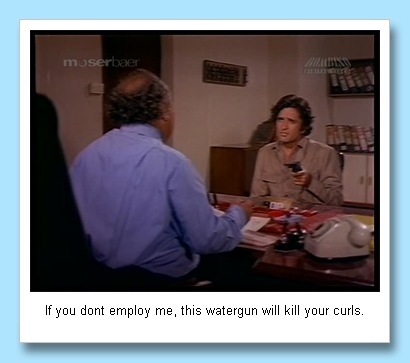 With Ramesh out of the Saxena home and Suresh successfully being controlled by their accomplice Shallu, what is the next step in the Pals’ revenge? To murder Shallu and convince Suresh that Ramesh killed her! This is supposed to get the two brothers to fight each other, and the plan succeeds admirably. What happens then? Will the two brothers ever play dress-up together, again? Will Ramesh and Sheetal stop “living together” and get married, finally? Will Ranjeet, I mean Raja, stop lusting after Ramesh? (He DOES – see the proof below!) 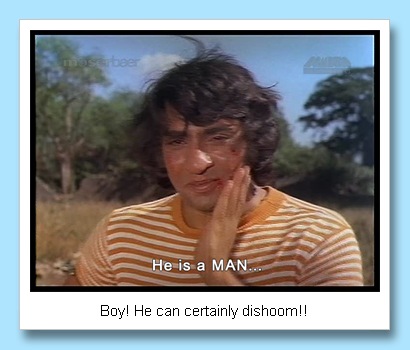 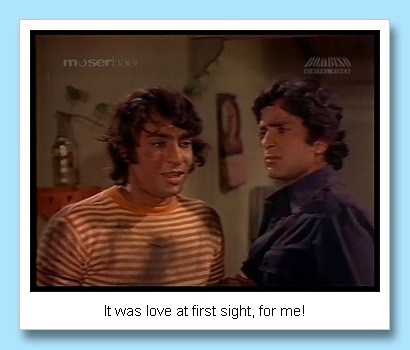 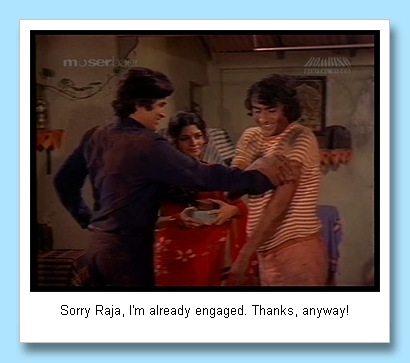 Not one of the best or the most intelligent of movies, its a fun time pass, nonetheless. It’s WTH (What The Heck?!!) quotient is fairly high and the unintended humor will keep you grinning throughout. 70s masala and 70s masala logic, plus RD Burman’s music – what can be more fun than that?
Posted by Bollyviewer at December 01, 2009