I was looking for Ashok Kumar’s earlier Afsana when I came across this one and his looming presence on the DVD-cover decided me. In retrospect, it wasnt a great choice. But, its a fast paced movie with some good moments and enough Dada Mani and Helen to paper over some of the cracks!
The story begins in a prison where prisoner number 16 (Ashok Kumar) is on his way to another jail on account of his tendency to jail-break. This time however, his escape is successful and he manages to run into a deep forest. Shekhar (Pradeep Kumar) – a rich landowner – is out hunting in the same forest, and accidently shoots no.16. 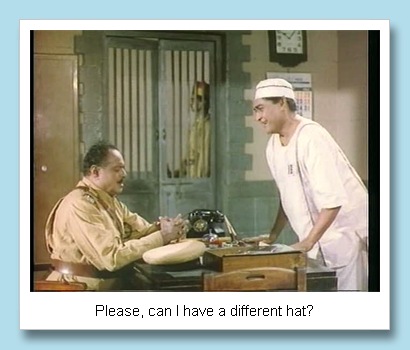 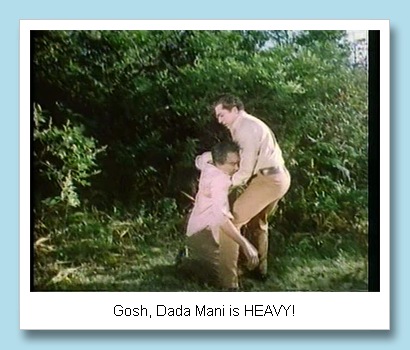 When No. 16 comes to, he is in a luxurious mansion and being taken care of by Shekhar’s servant, Gullo (Jagdeep). No. 16 gives his name as Gopaldas and decides to lay low in this luxurious jungle hide-out of Shekhar’s. For the rest of the film, Gopal will be stuck in this luxury-villa in the deep dark jungle, but the movie will go places. 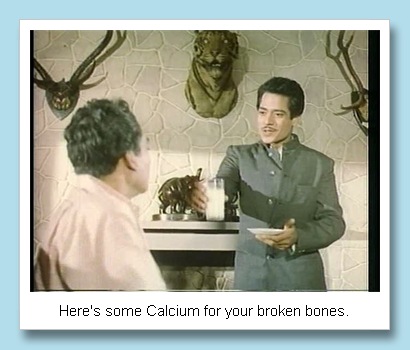 Gopal is quick to cotton onto and take advantage of Shekhar’s misogynism. Shekhar has a deep dark secret that makes him hate women. Lest you doubt his essential goodness though, you soon meet his constant companions – his dog and a mute-orphan kid from the village. How can a man who is so kind to dogs and kids be anything but good? 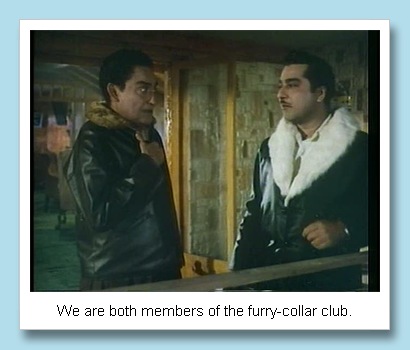 Into this haven of male-celibacy comes a damsel-in-distress – Renu (Padmini). She is a rich heiress, running away from a match arranged for her by her step-mom. A flooded bridge stalls her car, though the water level comes no higher than her ankles! Anyhow… a drenched and shivering Renu stumbles into Shekhar’s magically empty (where did all the servants disappear?) but well appointed mansion and unerringly makes her way into Shekhar’s bed. The latter returns from a day outdoors and also makes his way straight to bed – only to find Goldilocks, err… Renu, in there. He is shocked to find an unclothed beauty in his bed and reacts very badly. Poor Renu is ordered out in the pouring rain and Gopal takes up the job of escorting her out. 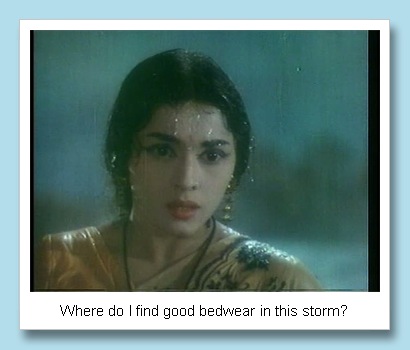 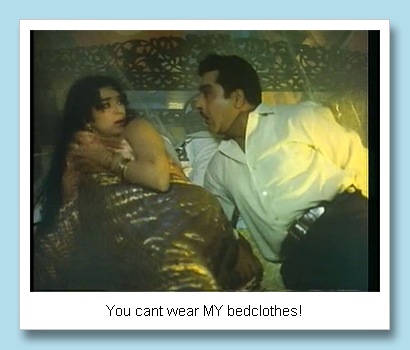 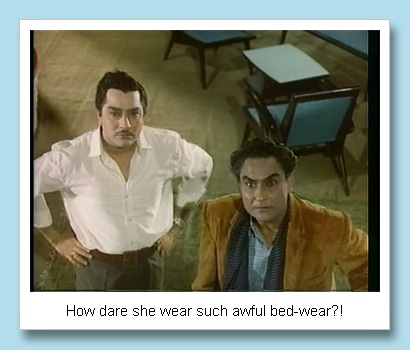 Gopal has no intention of letting such a beauty escape him. He shelters her in an outhouse – also very luxuriously appointed and complete with a wood-burning fireplace (how come I’ve never found such a place, EVER?!!). He learns how wealthy she is and decides to hold her to ransom. But he soon forgets his mercenary intentions and decides to foster a romance between Shekhar and Renu. (It looks like the script-writers forgot where they were going and scramblingly inserted a romance here!) In one of the most unconvincing romances ever, Renu dances for Shekhar and then chooses to die by his side when a peaceful herd of elephants is frolicking nearby. Shekhar is convinced of her undying love and reveals the reason for his misogynism. 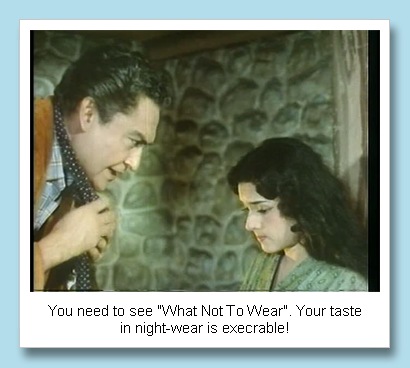 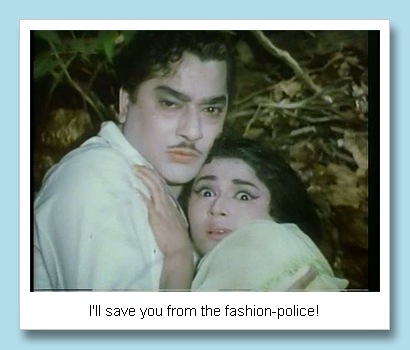 Back in the day when Shekhar was young and carefree, he met the gorgeous Kamini (Helen), fell in love (who wouldnt, its Helen after all) and married her. He soon discovered that she was only interested in his wealth and was actually in love with her partner (Anwar Hussain). He threw her out with some money and proceeded to hate ALL women forever. He refused to change even after he heard that she died in a car-crash. Hmm… I wonder if this is the normal male reaction to finding out that Helen doesnt care for you. Or is it a reaction to the fact that she actually cares for Anwar Hussain?!! 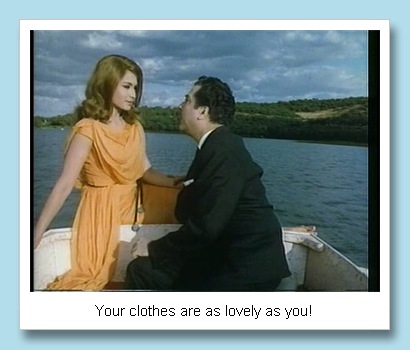 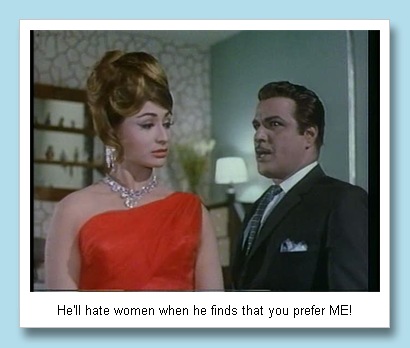 Back in the present, Renu and Shekhar decide to get married when her father and step-mom (Tun Tun in a surprisingly wicked cameo!) appear. With parental consent, the two speedily get married. On their wedding night, Shekhar has a surprise visitor who leaves him disturbed. His visitor is none other than Kamini, who is soooo not dead that you’d expect Shekhar to rejoice. Alas, he’d rather be married to Renu and pay off Kamini. Even here Shekhar’s intentions are thwarted. He finds that he cant liquidate his assets to pay Kamini. 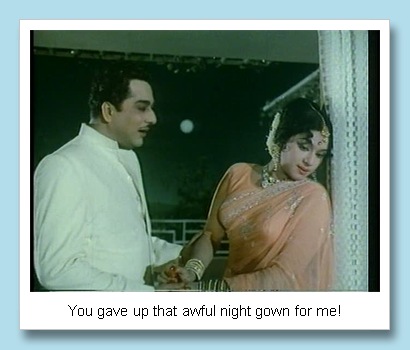 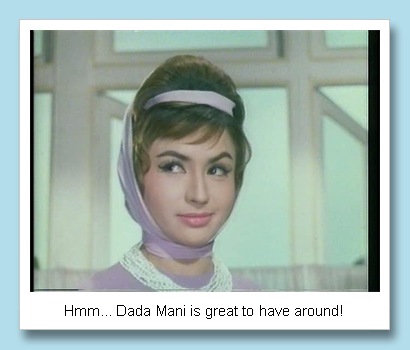 As I said in the beginning, its a fast paced story with some good moments. My favorite was the part where Shekhar and Gopal discover Renu in the jungle-mansion. The guys’ reactions reminded me of a scene in Chalti Ka Naam Gaadi where Ashok Kumar plays a misogynist (you can see it 5:00 min into this clip). The other nice thing was the two dance numbers – one each for Helen and Padmini. Overall though, the movie isnt well done enough for you to overlook the gaping plot-holes and loose-ends. Watch it only if you are a fan of the principle actors or if you are in the mood for a thriller that makes you laugh at all the wrong places!