In days of yore, rich people always had large parties in huge living rooms full of glitterati, sweeping staircases, shiny chandeliers and a Baby Grand Piano. In modern times though, rich people have fallen on hard times and standards have deteriorated beyond recognition. There are NO pianos in living rooms anymore - not even in that of Karan Johar’s rich NRI protagonists’ (well they do say that people forget their sanskriti (culture) when they live abroad!). So, for my piano fix, I need to revisit oldies from the 50s and 60s that were overflowing with people from the piano-owning (and playing) classes. Here are some of my favorites that have at least one character “playing” the piano throughout the song. 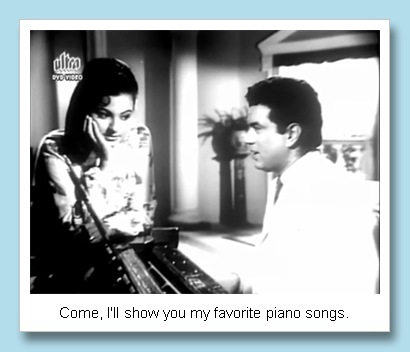 Yeh mard bade dil-dard bade (Miss Mary): Meena Kumari has some sage advise to offer fellow women in Lata Mangeshkar’s voice - “Men are evil. Dont ever fall for their sweet-talk”. Of course the men have their comeback - the irrefutable “we rule the world” – voiced by Gemini Ganeshan in Mohd. Rafi’s voice! Hemant Kumar composed the music for the gender-war lyrics penned by  Rajinder Krishan.

Dheere dheere machal ae dil-e-bekarar (Anupama): A loving wife anticipates the pleasure her husband (Tarun Bose)’s arrival will bring her… and continues to anticipate, even after his arrival! Lata Mangeshkar sings this lovely song to the tune of Hemant Kumar’s music in Hrishikesh Mukherjee’s romance classic.

Chehre pe khushi chha jaati hai (Waqt): A lovely young woman (Sadhana) describes the joy of hearing her beloved (Sunil Dutt) claim her for his own. Sung by Asha Bhosle to the accompaniment of Ravi’s music in B. R. Chopra’s stylish star-studded family drama.

Milte hi aankhen dil hua (Babul): Munawar Sultana and Dilip Kumar, in the first flush of their romance, tell each other of their mutual love in this tragic-romance (its B/W Dilip so happiness is almost impossible!). The singers are Talat Mahmood and Shamshad Begum, and the music is composed by Naushad.

The romantic piano
Aap ke haseen rukh pe (Baharen Phir Bhi Aayengi): The handsome hero (Dharmendra) sings of how the beauty of his beloved (Tanuja) moves his heart. But since nobody’s told him to be more specific, he lands up unwittingly wooing his loved one’s sis (Mala Sinha) as well! Rafi’s magic voice sings this intoxicating number to O. P. Nayyar’s music (umm… where did he forget his horse-beats?) in the last film Guru Dutt ever produced.

Khwab ho tum ya koi haqeeqat (Teen Deviyan): Another romantic classic. This one is picturised on the Evergreen Dev Saab (before he turned green!) who’s singing about this wonderful gal that he’d like to know. The women around him are all hoping that he’s singing about them while Simi Garewal and Kalpana are absolutely certain he has them on his mind! The singer is Kishore Kumar, the music composed by the great S. D. Burman and the lovely lyrics were the work of Majrooh Sultanpuri.

Manzil wahi hai pyar ki (Kathputli): “Love remains the same, only the lovers change”, thus singeth Subir Sen for Balraj Sahni while Vyjayanthimala dances on, oblivious to all the love in the air! The music is composed by Shankar-Jaikishan and the lyrics are by Hasrat Jaipuri.

The pain-of-love piano
Sab kuch luta ke hosh mein (Ek Saal): The gorgeous Madhubala sings out her heart-break, while the cause of it all (Ashok Kumar) looks on in guilt-ridden silence. Its Lata Mangeshkar voicing Prem Dhawan’s lyrics in Ravi’s music. There is a Talat Mahmood version that I like even more, but it lacks the all important piano!

Jhoom ke ga yun aaj mere dil (Patanga): Dont be fooled by the mega-watt smile. Shashi Kapoor is about to sacrifice his much-loved Greek statue (Vimmi) – and is in deep PAIN! And its Rafi’s voice thats doing an excellent job of conveying his pain in Neeraj’s lyrics set to music by Shankar-Jaikishan.

Dil ke jharojhe mein tujhko bithakar (Brahmachari): This time the one in pain is Shammi Kapoor. He is promising to remember his love (Rajshree), always. Only the black-hearted Pran is unmoved by Shammi-Rafi’s combined pain! The music is once again by Shankar-Jaikishan (Gosh, they do have a penchant for piano songs!) and the lyrics are Hasrat Jaipuri’s.

Angsty piano
Dil chhed koi aisa nagma (Inspector): This was a serendipitous discovery on youtube and inspite of the awful print, became an instant favorite. There is the lovely Geeta Bali exhorting her heart to sing a song that’ll melt the world. Minoo Mumtaz looks on sympathetically, while Dada Mani sits in uncomfortable bewilderment. Is the lament directed at him? Wish I knew! (Let me know if any of you do – I want to know about the film and the 'net is very unforthcoming.)

Lost-and-found piano
Jeet hi lenge baazi hum-tum (Shola Aur Shabnam): We are all familiar with the childhood sweethearts sub-genre of the lost-and-found formula. But rarely have childhood sweethearts been re-united by piano-side with such lovely music. Rafi and Lata sing this Khaiyyaam-Kaifi Azmi composition for Dharmendra and Tarla Mehta while the clueless third-corner-of-the-triangle (M. Rajan) looks on.

Philosophical piano
Ajab hai dastaan teri (Shararat): Another serendipitous find on youtube, this one has Kishore Kumar lip-syncing to Mohd. Rafi’s voice! A lovely song composed by guess who? Piano-kings Shankar-Jaikishan, who else! Rafi—Kishore are talking about the strangeness of life and how it makes you laugh some times and cry at others.

Have I convinced you that we need to petition the powers-that-be in Bombay for a piano come-back? Shantanu Moitra did his best in Piyu bole (Parineeta 2005) but he clearly needs more support! Of course, the petition will also have to give examples of good piano songs so that the film-makers would know what we’re looking for. So lets list ALL of them!
Posted by Bollyviewer at April 13, 2009