A while ago, our friendly neighbour, the Sultan of Pitustan held a hunk-fest and released a list of Bollywood's top 10 hunks. The surprise winner was Balraj Sahni. Aye, the man who drove a rickshaw and channeled the angst of the dispossessed in Do Bigha Zameen, wore a dhoti and glasses in the true "Unkil" tradition and sacrificed ad infinitum in several family dramas - Bhabhi (1957), Choti Behen (1959), Bhabhi Ki Chudiyan (1961), etc. What is so attractive about him? He was a great actor, very good looking, gave great talks at my favorite University, was an acclaimed writer, and an overall good guy in the bad bad bad world of Bollywood. Is that why I echo Sultan Pitu's liking? Nope. The guy did romance like no-one else and always played such intellectually idealistic characters that its hard not to like him! But that isnt all - he could also do masala and carry it off with great panache as I discovered in this unknown movie I stumbled across recently. OK OK, So I will stop rhapsodizing about Sahni saab, already. Without further ado, readers, I give you the Black Cat. 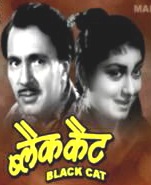 Bombay is terrorised by a series of ingenious robberies engineered by the master thief "Black Cat". The Master Thief has an organisation that is more efficient and deadly than the city police (lets face it - it could hardly be less efficient than them!) and has a network of spies and informants second to none. The network alerts the Black Cat to Number 14's potential treachery and the unfortunate 14 soon ceases to be. 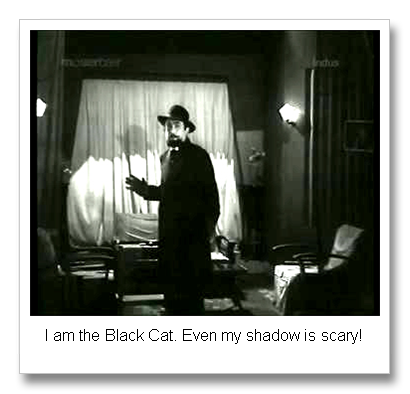 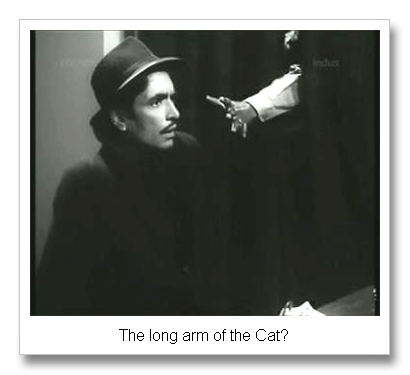 Such is the organisation the smart young CID officer, Inspector Rajan is pitted against. He had managed to get Number 14 to turn informer but the Black Cat tricked Rajan away from their meeting and then carried away the hapless #14 to his early grave (or pyre, as the case may be). Rajan, however, is unfazed by his failure and gamely carries on. 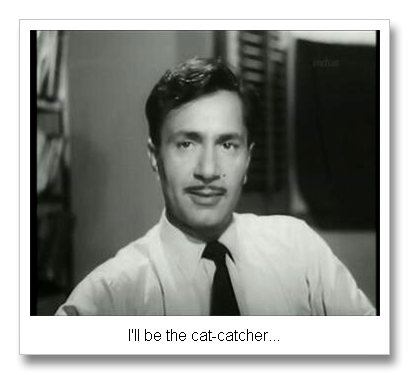 The next day while at breakfast with his Mom (Mumtaz Begum), sister and good friend Prof. Gupta (N A Ansari), Rajan glimpses a mysterious woman lurking outside the door. When he attempts to see who it is, the lady flees in a car. Rajan gets atop his trusty bike and gives a chase. The thrilling chase brings them right up to the edge of a delightful forest where he finally catches up with her. The mysterious beauty turns out to be none other than his beloved, Mita (Minu Mumtaz) who also happens to be Prof. Gupta's sister. 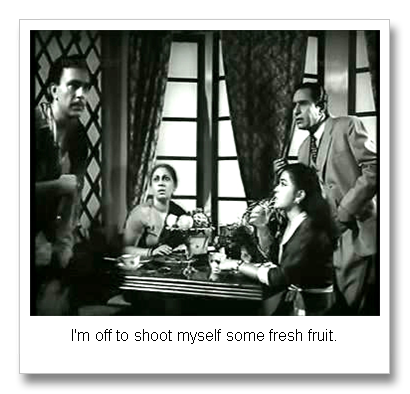 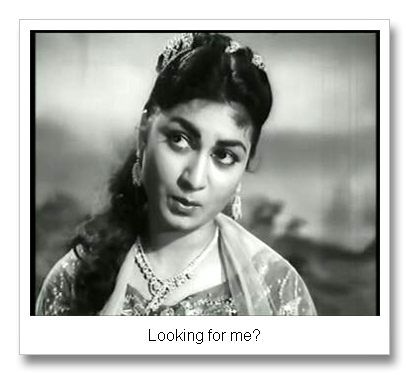 Abandoning his police duties, the wise Rajan gives himself up to a romantic interlude. He reads her some delightful poetry and in a feat that would turn Abhinav Bindra green with envy, he shoots down a fruit for her. Soon after, though, he is roused to his criminal, err... I meant police duties and is back to chasing the Black Cat. 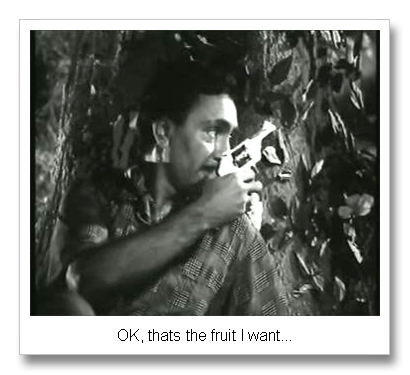 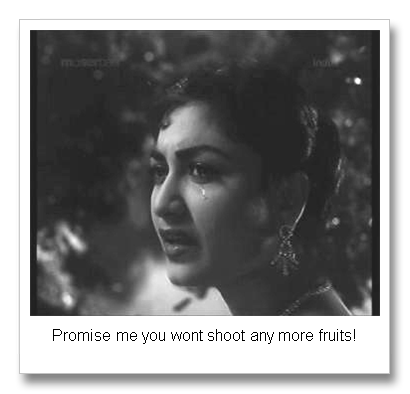 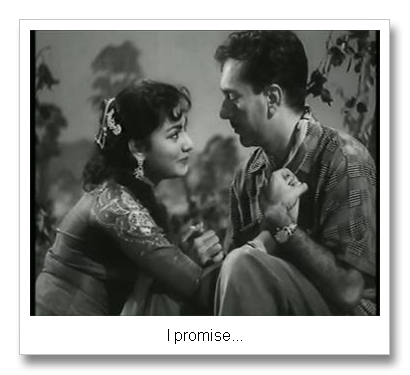 He isnt alone in his quest for the Cat. Pursuing parallel enquiries are the bumbling private detective Popat (Johnny Walker) and his side-kick/secretary Bul Bul (Shammi). Popat belongs to the Sherlock Holmes school of detectives. He believes in the efficacy of crawling all over the floor with a magnifying glass in hand and tabulating every grain of dust and every speck of fibre he finds. He also firmly believes in classifying sleeping forms as corpses inspite of the corpse's loudly expressed indignation. Inspite of their rather unique approach to detection or rather because of it, the two manage to provide Rajan with some invaluable information about the Cat. 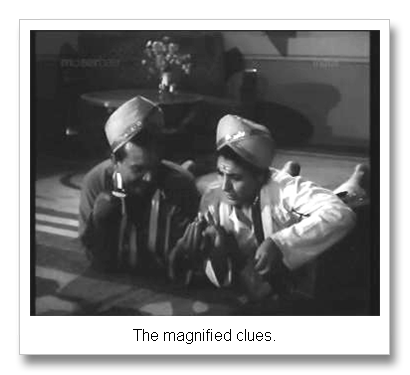 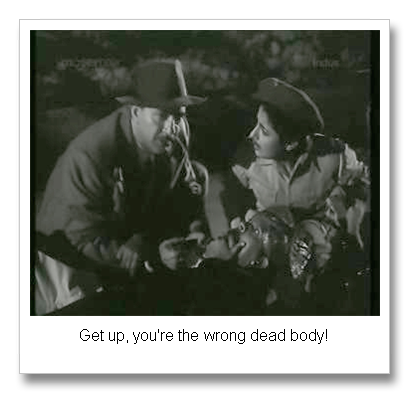 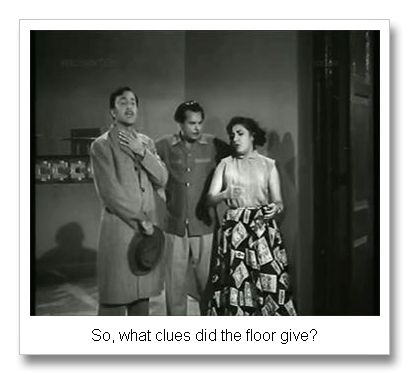 Rajan's investigation proceeds apace and all clues lead him to his dear friend Prof. Gupta. Indeed, we see how the saintly professor uses the pretext of a weak heart to shut himself up in his bedroom early every night. Once safely asleep, he transforms into Black Cat and uses the secret passage in his bedroom to get to his Cat-lair. However, Mita refuses to believe Rajan when he tells her that her brother is a master criminal. 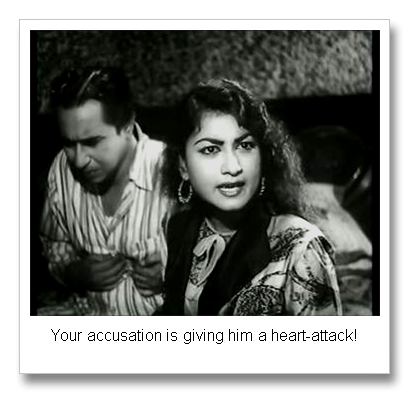 Every time Rajan gets close to the Big Cat, it turns out that Prof Gupta is innocently far away! Meeta begins to believe that Rajan is unable to catch the real Cat and is out to frame her brother. Hell, all this hide-and-seek extracts its toll on the viewer and I was as confused as Rajan - was Prof Gupta the Cat or not? In short are we watching a secret double-role, a fake double role or is this the problem of Schrodinger's cat? Rajan refuses to take either the filmi or the quantum mechanical approach to solving this conundrum. Instead he baits a clever trap to flush out the Cat. The Cat of course has some clever traps up his sleeve, too. 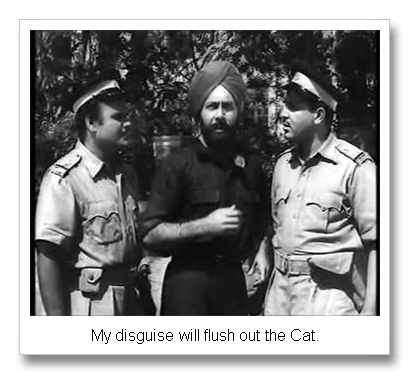 Worried whether the cat will ever be truly out of the bag or not? You neednt be. With Inspector Rajan on the trail, we can all sleep peacefully and leave him to mind the cats! 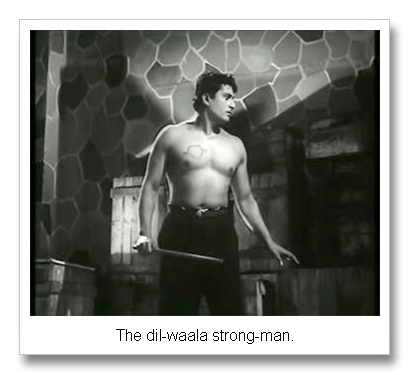 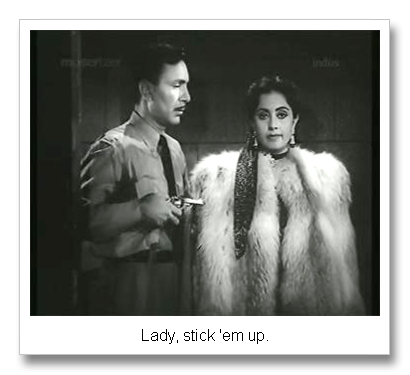 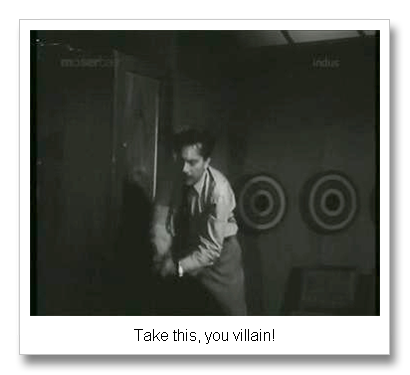 A stylish action thriller from the production house that went on to give us the immortal Sholay, Black Cat combines the best of film noir with Bollywood masala. There is an abundance of fedoras, long over-coats, sinister music, noirish camera-work, fast-paced action and dramatics. Balraj Sahni is a bit lacking in the scenery chewing department but is so charismatic that you wont mind his natural acting! Minu Mumtaz looks lovely and does a pretty good job acting-wise but sadly doesnt get to show off her dancing at all. Ansari as the good Prof/bad Cat (he also directed the movie) is strictly OK. He is fine as the good guy but not evil or chilling enough as the bad guy (I missed K. N. Singh's villainy). Johnny Walker gets to do a lot in the movie and is predictably funny. I have to mention his innovative use of beer bottles as deadly assault weapons - no, he doesnt do anything as mundane as bashing people over the head with them. If you are curious to find out what he does do with them, you need to see the movie! Shammi looks very cute but has little to do in the movie inspite of all the screen time she gets. 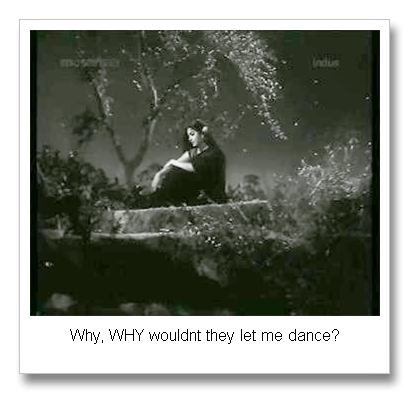 The music by N. Dutta gives us some lovely songs. My favorite is the haunting Lata number Main tumhin se poochhti hoon, but the peppy ones were very good too - One two three four and Kaun tujhe roke had shades of good-old rock-n-roll while Nashe mein hum brings on the nasha as only Rafi's voice can!
Check it out for the fast-paced story, great songs and Balraj Sahni in an unusual role.
Posted by Bollyviewer at September 29, 2008