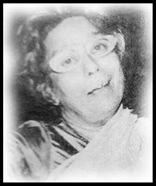 Shamshad Begum The name conjures up images of golden classics, old-fashioned fun songs, and a nasal voice that may be out of fashion now, but never seems dated. She started her career singing for radio Lahore in 1937. From there to singing for movies was but a short step. She recorded her first film-song for music director Ghulam Haider in the Punjabi film Yamla Jatt (1940), and her career as a popular playback singer was launched! She went on to give us hundreds of popular songs in her lovely earthy voice with its distinctive nasal twang. And she is perhaps the only female singers to have provided playback for leading men – she sang for Shammi Kapoor (Bluffmaster) and Biswajit (Kismat)!

For a singer without any formal musical training, she had an amazing vocal range and command over her voice. I love her folksy songs best, but there is no denying that she shone at every genre she handled – from the "Western" Meri jaan sunday ke sunday, to the haunting Dharti ko aakash pukare and the numerous peppy numbers that have been remixed ad infinitum in more recent times. Her biggest hits were from the 40s, most of which I’m not very familiar with. But even limiting myself to her 50s songs, I still had lots of great songs to choose from! The only way I could limit myself to “ten favorites” was by listing the first ten songs that came to mind – though even then it was a tough job since I did want to include some of her 40s songs and some of her lesser known numbers. And here is my list, in all its freshly edited glory (the songs are included in this youtube playlist):

It is at once an earnest appeal for compassion and a passionate avowal to improve their lot, by a group of orphans. When I first heard this song, I was struck by the earnestness in Shamshad Begum’s voice. Most of her songs that I had heard before, usually had her in a playful and bouncy mood, with the occasional sad song thrown in. Her unusual earnestness apart, I just enjoy this song for her voice that flows like a steady stream of melted chocolate – sweet, thick and so very rich! 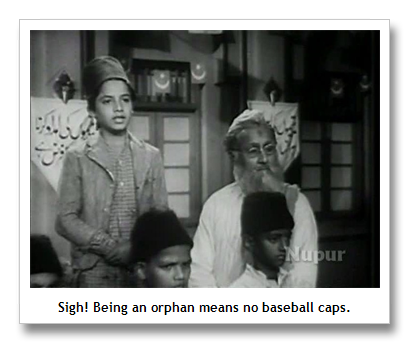 A group of playful women doing what apparently comes naturally to womankind – multi-tasking. They sing while they dance, fly kites and fight kite-battles. And it does not even appear to be an unusual scene in this village, else Suraiya wouldn’t be sitting with that bored expression on her face! Or perhaps she thinks that there are enough singers in the fray and so, won’t join in? Shamshad’s duet partner here is Uma Devi whom we know better as Tun Tun, the comedienne! 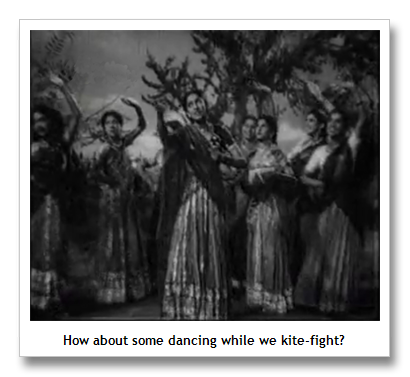 In a film teeming with popular songs, this one is admittedly lesser known than the hilarious Mere Piya gaye Rangoon, but I love the lyrics of this one more. The woman (Nigar Sultana) counsels the spectators that losing your heart [to someone] is a good thing, while the man (Yakub) qualifies it with "sometimes". And every time she extols the virtues of following your heart, he counters with a droll recital of the consequences! They end up concluding that it’s nice to fall in love, sometimes – ironic considering how much romance goes into the making of this film’s plot. And just listen to the voices – the singers are having as much fun singing as we have listening! 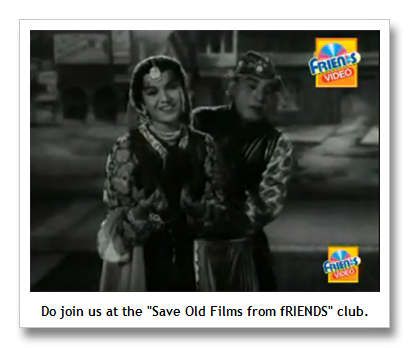 I’ve loved this song ever since I heard it on radio, looooong ago. It’s such a happy song with all the trappings of romantic anticipation. There is a lilt in Shamshad’s voice and you can almost hear her dancing, skipping and jumping all over the place. And I loved it even more when I realised that onscreen, that is exactly what Vyjayanthimala does! This was by way of her (Vyjayanthi’s) Hindi film debut, and I can’t help but wonder if this lovely song had anything to do with the success of this film. 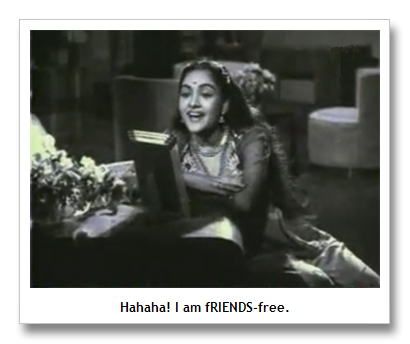 Kishore-Shamshad always struck me as a rather unusual singing duo, more so because I (wrongly) think of them as belonging to different decades. So I am always surprised at how well matched they are, even in their humorous antics. Kishore may be Bollywood’s Buffoon No. 1, but here he is clearly out-buffooned by Shamshad. Just listen to her "O Mister" – it makes Kishore sound positively sober in comparison! The lyrics of the song are hilarious enough – a couple (can’t find the video so I can’t say who they are) are celebrating their wedding night and anticipating the divorce about to happen soon – but Shamshad’s buffoonery makes them even funnier. 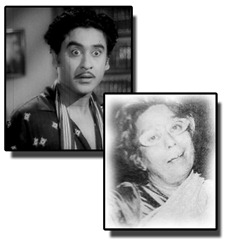 This time it’s Rafi against whom Shamshad Begum plays off her humorous antics, while Arabic dates (the edible kind) and sour grapes play a very prominent role in the lyrics! A feisty Shakeela tries to hold off an ardent suitor (Mahipal, if I recall correctly) by telling him that she is "a bunch of sour grapes" that he will "not be able to reach". When the "sour grapes" come in the shape of Shakeela and sound like Shamshad, can one blame the said suitor for promising rashly that she is his Arabic date in whose shade he will spend his life? 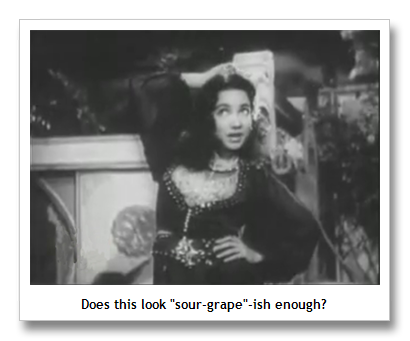 I love the Arabic sound of the music in this song, and Shamshad’s mellifluous voice is just the icing on the cake. While 'seductive' is not the first word that comes to mind when I think of her voice, this song certainly brings it up! When she sings Aa dil se dil mila le (come, let heart meet heart), I cannot understand Jairaj’s hesitation in following this particular invitation (anybody know who the actress is?). Is it because this song clearly calls out for some belly dancing that is remarkable by its absence? 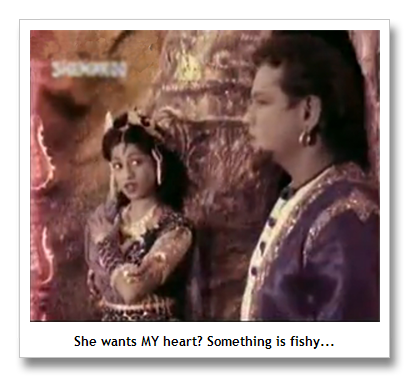 Shamshad Begum worked with a cross section of music directors, from her mentor Ghulam Haider to Naushad and Madan Mohan and other less well-known musicians, but nobody, in my opinion, used her voice to such good effect as O. P. Nayyar. Perhaps it was the touch of Punjab in his music and her voice that brought out that vibrant energy in her singing, but her songs with him remain her most popular ones to date. Coming back to this song - I love the flirty, peppy tone of the lyrics and Shamshad’s breezy rendition. You can hear the smile in her voice as she asks us to guess her name and gives clues about herself. And I love that Minu Mumtaz gets to lip-sync onscreen. She does it with just the right amount of teasing flirtatiousness, though I wish she were allowed to dance a bit more. 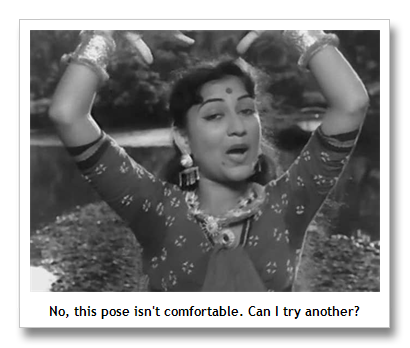 A foot-tapping romantic number, this one has long been a favourite of mine. There is nothing like Shamshad-Rafi being let loose in a peppy song complete with O. P. Nayyar’s signature horse-beats. But wait, this was composed by Hansraj Behl! Hmm… is that why it’s actually picturised on a couple traveling in a horse-cart? Instead of quibbling over small details like that, let’s enjoy Shamshad-Rafi giving full rein to their joy in singing and savour the sheer happiness this song embodies. 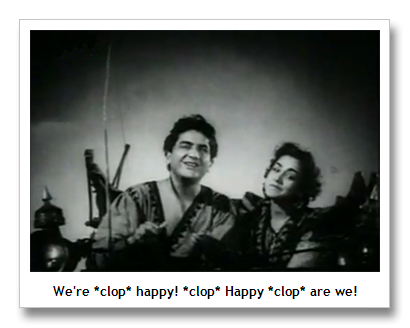 While it was Kalyanji-Anandji who first successfully used her voice in an androgynous context, it is this OP Nayyar cross-dressing classic that has found long-lasting fame. It is still re-mixed and played in dance clubs! The reason isn’t far to seek: Shamshad-Asha bring such verve and playful energy to their singing; the music is vibrant and perfectly complements the singing; Babita-Biswajit channel the vivacity so well onscreen… In short, everything comes together in this song so well that it would take a very picky critic, indeed, to find a fault with it! 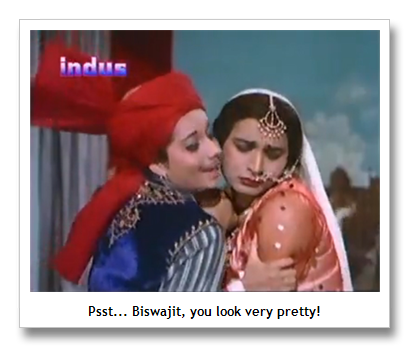 And before I sign off, here’s the Shamshad Begum interview that got me started on this post  - part-I and part-II (the link was sent to me by my sister who wisely suggested I stop drooling over Rafi and think of my other favourite singers! Now I have, and will continue the series with some other singers over the next few months.)