Khanna-o-Rama: A crisis of romance

To most of my generation, The Emergency (suspension of fundamental rights and absolute power to the cabinet – 1975-77) was a dark event that happened when we were babies, and was thankfully over long before we were conscious of it. More importantly, it had NO impact on Bollywood and 70s masala. What most of us do not know is that Bollywood, and in fact Vinod Khanna, had a very important part to play in it!
When a journalist friend of Beth’s brought us the inside story of The Emergency and how it was brought to an end, the two of us had a hard time believing it. But the proof was irrefutable. Top secret government documents (they included suppressed press reports) could not lie! It HAD to be true. And some digging on our part confirmed it. Our first thought? People need to know about this! Unfortunately, none of the leading news publications would touch the report with a barge-pole. So, in the interest of informing the public, Beth and I have decided to write it up. And since the star of this week was intimately involved in the whole episode, we bring you the story during Khanna-o-Rama! Lets first go to Jan 1975, when the trouble began, and see what the reporters have to say:

It’s been a month since the CHARM (Confederacy of Hindustani Alpha and Romantic Males) issued its weekly Romance Manual. There are rumours of a serious split in CHARM. As Sundar, head of the YMCA (Young Men’s CHARM Association) puts it, "In the absence of clear guidelines from CHARM, romance in the country is in serious peril. The men are confused on how to romance the women. Not a single incidence of new romance has been recorded in one month, and existing romantic ties are being broken right, left and centre.”
Members of the CHARM board refused to comment when approached by the press. Even the CHARM spokesman, Dharmendra, was tight-lipped about it. "Its an internal committee matter", was his only comment. When pressed for more information, the CHARM spokesman countered with “Kameeno, main tum sabka khoon pee jaaonga!”. Naturally, the reporters fled rather than feed the blood-thirsty hunk. 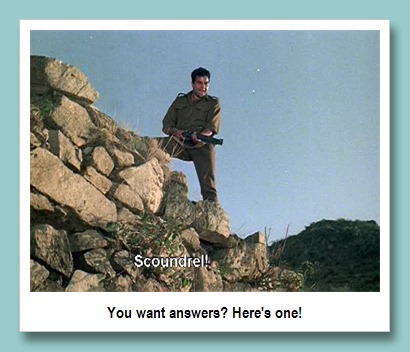 While the trouble may have first come to fore in Jan 1975, the seeds were sown months earlier, when Vinod Khanna took over as President of CHARM. He had vowed to bring back the pride of Indian machismo. “I will teach them to SMOULDER like real men”, was his promise, and he delivered on it. Soon, CHARM had flooded the media with enough pictures of smouldering Vinod Khanna to set the whole country ablaze. The suave and sophisticated charm that CHARM had advocated under previous President (Shashi Kapoor) was soon a thing of the past. The women liked Vinod’s sizzle and smoulder? Well, the men would provide it! 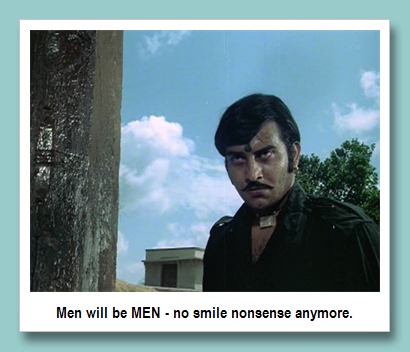 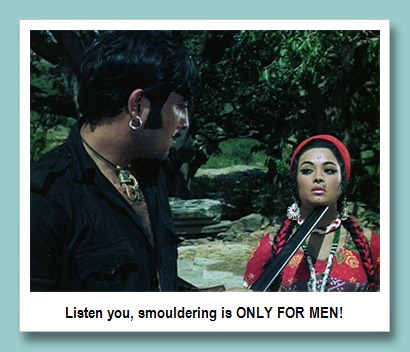 And thus began the campaign that set the whole country ablaze. Men no longer smiled or murmured sweet-nothings in their sweethearts’ ears. They roared their sentiments, chewing out words of romantic syllables and spitting them out like so much spittle. Elegant clothing went out of fashion, since everybody was rushing out to buy dacoit gear. 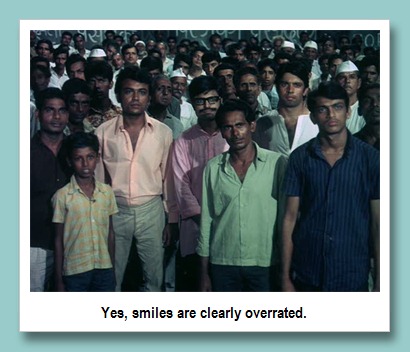 Beth and I were able to talk to some of those badly affected in the ensuing crisis, and here’s what they had to say about the tense situation in the country in '74-'75.
Khabbar Singh, veteran dacoit and chief of the Chambal is for Dacoits Association:

It was crazy! You could buy a well-tailored suit for Rs. 20, while dacoit suits were getting auctioned at shops for as much as Rs. 2000! We dacoits were never so well dressed - we sold our clothes and bought silk three-piece suits!

Those were bad times. We had posh boutiques in Taj and Oberoi Hotels, and used to make suits for Shashiji himself. But Vinod Khanna ruined us with his dacoit suits. Within months, me and my fellow darzis (tailors) were bankrupt. Even our rich clients bought daaku outfits from cheap tailors to prove their mardaangi (machismo). 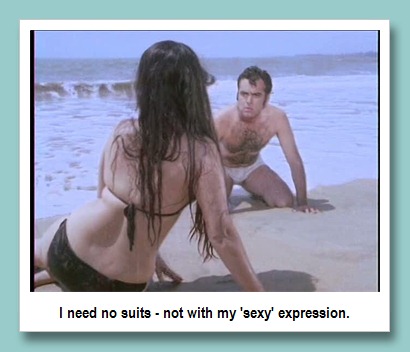 And these werent the only people affected. Suitings and shirtings manufacturers were soon facing bankruptcy. Poets and musicians were out of jobs (no demand). Millions of flowers were rotting un-picked, because there was no longer a demand for roses or flowers of any kind! Mineral and wood resources were fully stretched to meet the unprecedented demand for guns and bombs, with precious little left even for essential goods. Food prices reached an all-time low since the youth took nothing but daaru, ruining the farmers. The tourist industry was badly hit, since people no longer went to Kashmir, or any of the other popular resorts. But the worst casualty was the country’s law and order situation. Crime had risen dramatically since all men wanted to be able to out-dishoom and out-dacoit their rivals. The streets were no longer safe, banks were looted daily and policemen cowered in fear of their lives. 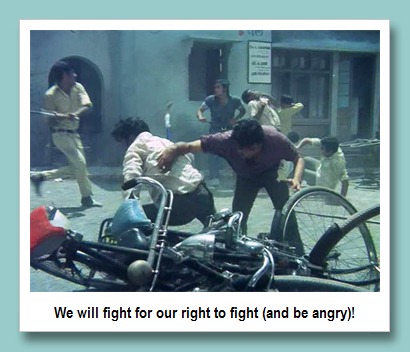 By late '74, India was in deep trouble, and the crisis was rapidly getting worse. The Prime Minister, at the behest of her Cabinet, wired an SOS to Shashi Kapoor who was shooting in England. Minutes of Shashi’s meeting with the PM show how troubled she was and how much she was banking on his help. “Shashi you have to bring charm back into fashion. Even relatively charming and restrained people like Dharmendra and Amitabh Bachchan are going overboard with this angry-smouldering-young-man craze. And with the likes of Jeetendra and Dev Anand teaching THE SMOULDER, our youth are neither charming nor smouldering. Even if India weathers this crisis, I am worried that there wont ever be a next generation for the country, since the women absolutely refuse to have anything to do with these men!” 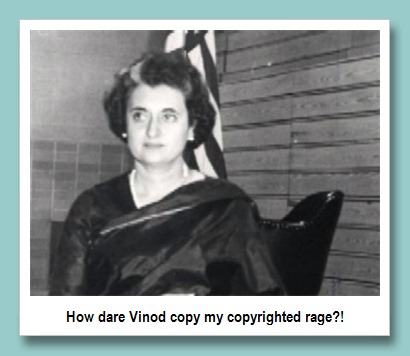 Shashi called a meeting of the CHARM board and the stage was set for a historic confrontation:

Shashi: Vinod, do you realise what you’ve done?! The country is on the brink of social and economic ruin, just because you refuse to smile!
Vinod (hissing): Smiling is for sissies. I have taught Indian men how to be MEN, not Mr Romeos.
Shashi: Are you implying that I am not a man? How dare you?!! Do you realise the power of these dimples? These uneven teeth?
Vinod (spitting out through clenched teeth): Listen you Angrezi-puttar, sweet nothings, poetry, smiling and wooing is not the Indian way. I am all for Bhaartiya sanskriti and for the Indian youth to reclaim their heritage. People like you are no longer welcome here.
Shashi (looking around): What does the Board think?
Dharam: The committee decided to go with the smoulder method of romance and we’ve been propagating it with great success.
Amitabh (apologetic): Err… you know I can adapt to both smoulder and smile. I’ll go with the majority vote.
A look at all the smouldering members of the Board told Shashi exactly where he stood.
Shashi (speaking through clenched teeth): FINE! Me and my smile will leave this boardroom. But charm is MY trademark, and it goes with ME. 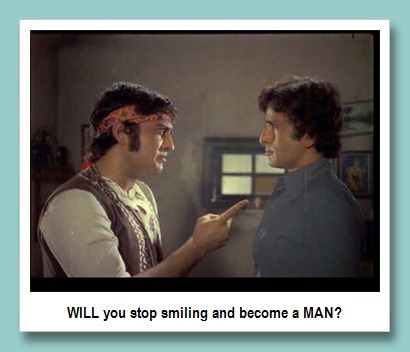 Of course, charm wasnt his only companion as he left the boardroom. There were those on the board who just could not take to smoulder (the likes of Rajesh Khanna, Jeetendra and Dev Anand) and those who had as much a claim to charm as Shashi did (Rishi!) – they left with him. Big Bollywood, though, stuck with Vinod. 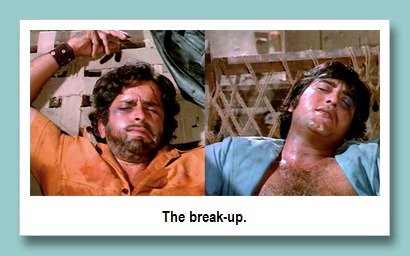 And thus, CHARM split into SMOULDER (Swarthy Men Ought to Undermine Ladies' Deeply Exacting Regulations) and SMILE (Simply Make It Lovely and Elegant), and India’s crisis worsened. Things got so bad that in June '75, the President declared a state of emergency in the country, suspending civil liberties and conferring dictatorial powers on the Prime Minister. How did the crisis resolve? Was the break between Vinod and Shashi permanent? Did Vinod ever learn to smile? For answers to these questions and more, read the second part of this article, over at Beth’s. 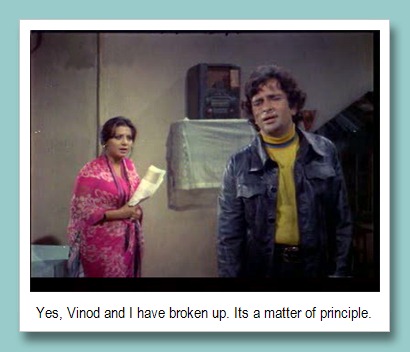 Edited June 1, 2010:
You have spoken and Saif is the true heir to SMOULDER!