The glorious 70s: shining the spotlight on Gulzar 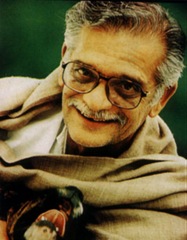 His CV reads: poet, lyricist, writer and director. That covers a wider range than most other film personalities can boast of! Born Sampooran Singh Kalra, in what is now Pakistan, he started out as a lyricist in the early 1960s. Success came early, with Mora gora ang leyi le for Bimal Roy’s Bandini, and he is still best known for his Hindi song lyrics. Not being of a poetical bent of mind, I must admit that its his directorial ventures that interest me more.
He started out as a director with Mere Apne in 1971, and went on to make ten films in the 70s decade. For me, the Gulzar love began with his wonderful tele-serials in the late 80s and early 90s – a big favorite was Kirdaar, which adapted short stories from various writers and featured Om Puri as the lead in every story. After that, looking back at some of the 70s and 80s films that I liked a lot, I was astonished to realise that a lot of them were either directed by Gulzar, or written by him! My favorite Gulzar film of all times has to be Angoor (1982) – his adaptation of Shakespeare’s The Comedy of Errors. But that is a post for another decade! 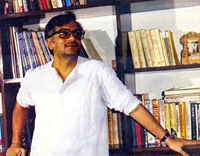 What is it that makes Gulzar’s films so special? Google 'Gulzar films' and the word that pops up most often is “sensitive”. Isnt that what people say when they mean, “no masala or fun”? I would argue that masala isnt totally absent from Gulzar’s narratives. Take the instance of Mere Apne, for example. There is dishoom dishoom, loud dialogues and blunt symbolism. Or look at Parichay where a rebellious teen is brought back to the familial fold by falling in love with her siblings’ tutor – love conquers all! So, masala is very much present and correct – though minus the masala madness that characterises the average potboiler. As to fun, it isnt missing either - its just a lot quieter, with the humor more witty than slapstick, and the sarcasm a lot more intelligent.
So what makes Gulzar’s films unique? Is it their subtle acting, down-to-earth settings, beautiful stories? No! You can find that with a lot of other directors – particularly of the parallel cinema persuasion. One thing that I love in his films is his attention to small details – little things that turn larger-than-life filmi characters into living, breathing, real people. So you dont have to suspend disbelief to follow their stories. But the most important thing that sets him apart is the unique aesthetics in his films – something intangible, that leaves an impression of beauty in its wake. Watch a Mausam, or a Khushboo or an Aandhi – and what you’ll remember is the feeling of having seen something of delicate and ethereal beauty. You may not always agree with the film’s message, you may not even like the story, but it still leaves the impression of having watched shaayari (Urdu poetry) in motion.
I love all his 70s films, but the two I love most are Mausam and Khushboo - two movies that are full of everything that goes into making a good Gulzar film. They are simple stories where he sketches vivid characters on a small canvas. They feature big stars in unusually de-glam roles that give them the room to show off their acting skills. And they have the kind of songs that take a while to sink in – but once they do, they never let go! Remember Ghar jaayegi or Chhadi re chhadi?

Mausam is the story of Dr. Gill (Sanjeev Kumar) and his relationship with two young women. In his youth, Gill had a summer romance with Chanda (Sharmila Tagore). He returns years later, to find that Chanda died in great misery, still waiting for him to return. Her daughter, Kajli (also Sharmila), is forced by circumstances, to work as a prostitute. To make reparations for abandoning Chanda years ago, he tries to transform her daughter into a respectable young woman. 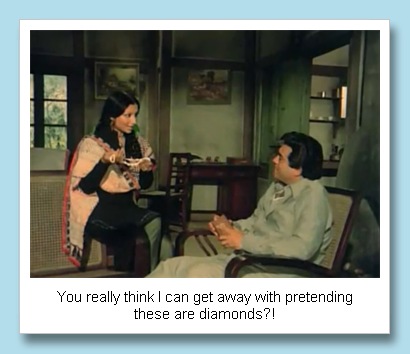 While the first part, with young Gill falling for a bubbly Chanda is charming, it is the complicated relationship between Kajli and the older Gill, that I always remember about the film. Though Kajli is not his daughter, he feels a paternal affection for her, and tries to give her the life she would have had, as his daughter. Kajli, for her part, has no illusions about men and what they want from her. She mistakes his empathy and guilt for genuine attachment to herself, and begins to fall for him. A romance with incestuous connotations, if ever there was one - yet, its handled so beautifully, and yes, sensitively, that it never repulses. Needless to say,  the acting is superb. And the music… Can one ever forget Dil dhoondta hai? If ever there was a theme song for nostalgia, this is it! Compare this to a similar triangular relationship in Yash Chopra’s Lamhe, and you can see the difference a Gulzar can make! 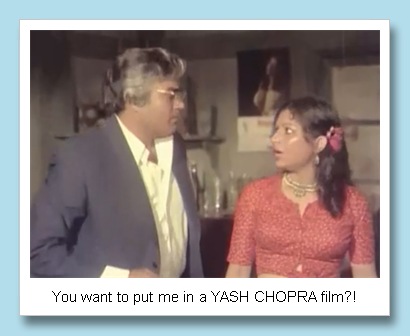 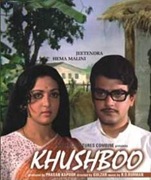 Khushboo is the story of village belle Kusum (Hema Malini), who was engaged to Brindaban (Jeetendra) in childhood. A subsequent dispute between the families led to estrangement and eventual separation when Brindaban moved away with his family. Years later, a widowed Brindaban returns as the village doctor, with his young son in tow. There he meets Kusum, who has never forgotten her childhood engagement. Her resentment of his desertion doesnt last long. She is soon taking care of him and bonding with his son. How can Brindaban resist the appeal of her unwavering love and loyalty, not to mention Hema’s beauty? 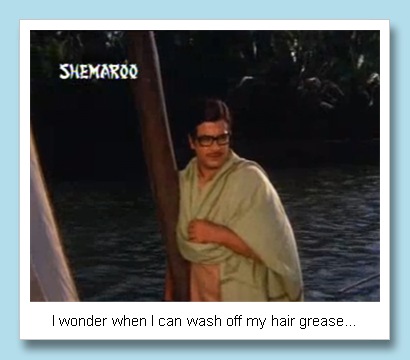 This isnt a story I would ever take to, in the normal way. When Karan Johar  attempted something like this (Kuch Kuch Hota Hai), I HATED the film. But in Gulzar’s hands, I can easily overlook the outrage to my feminist sentiments and my strongly held views on how romances should be conducted! Its a lovely film, with some beautiful music and great acting. 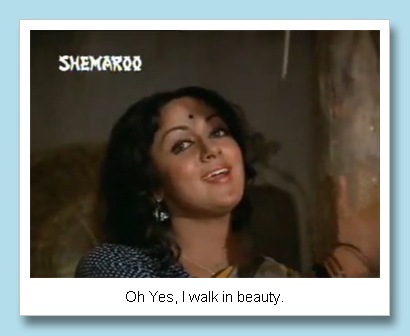 For all his sensitivity and creative film making, there is one thing about Gulzar’s films that always niggles at me. The female characters in his films, though not doormatty at all, arent very feminist, either. His heroines are all cut from the traditional mould, and never do anything that would upset the patriarchal balance! In Mere Apne, you have Anandi (Meena Kumari) who is convinced that a woman’s place is in the home. Kusum of Khushboo is a proud young woman who refuses to marry her ex out of pride – not because he disregarded their engagement to marry someone else, but because his family did not observe the traditions of an arranged marriage by formally asking for her hand! But then, when the real world is full of such characters, who am I to argue that they should be kept away from the screen? Besides, he did change with the times, and his later heroines were a lot better in this respect.
No matter what minor quibbles I may have with some of his plots and/or characters, there is no denying that the delicate beauty of his films gets to me every time!
Posted by Bollyviewer at February 24, 2010