A song from this has been a long time favorite (Meri neendon mein tum). That, and the pull of bubbly young Meena Kumari, finally tempted me into watching this film. Its a sweet, lighthearted film that has, for some inexplicable reason, roused fRIENDS to fury. The print is terrible, the picture rolls on the screen or gets blanked out by bright lines, and the film’s reels are not put together in the right order. There are parts that remain a mystery in the first disc and light suddenly dawns in the second disc, because 15 minutes that were mysteriously missing in disc 1 are part of disc 2! And no, its NOT an experiment in a non-linear narrative! AARGHH!!!! 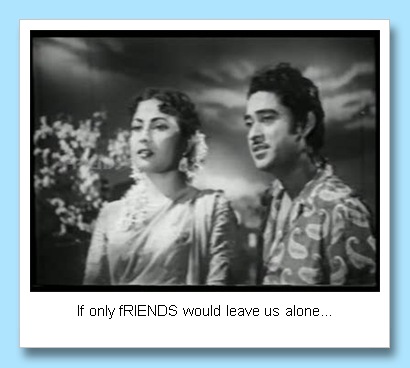 Shivcharan ‘Chand’ (Kishore Kumar) is of a poetic bent and gets his propensity for spouting poetry from his father (Murad). While Murad (I didnt catch the character’s name) is a poet of the old school who likes to spout social poetry, Chand (as Shivcharan styles himself) writes the chalta sikka (walking coin!) or popular kind of poetry. So deeply poetic is he that he even answers questions in his college exams with poetry. Needless to say, he flunks. 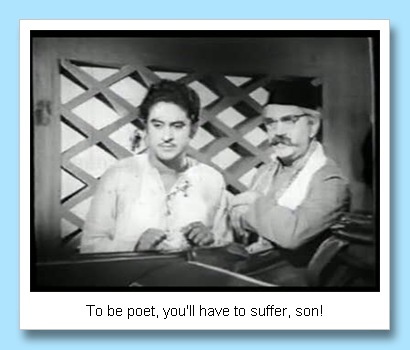 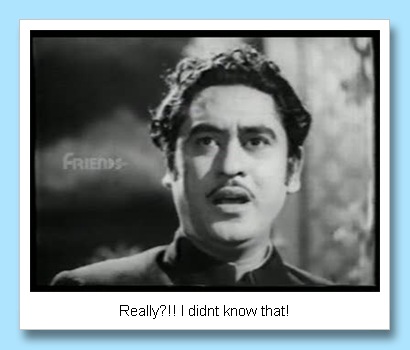 On a chance visit to the theatre, Chand sees the lovely Mala (Meena Kumari) dancing and is instantly smitten. And that shows him his career path – he must write songs for her! (Another man who would like to see Meena Kumari dance to his tune?) To this end, his friend Karim (Johnny Walker) and he wangle their way into a theatre owner’s home. The very fact that the theatre owner – Ashok - is played by Pran, in a sinister wig with a smoking pipe, ought to mean some devilry is afoot. 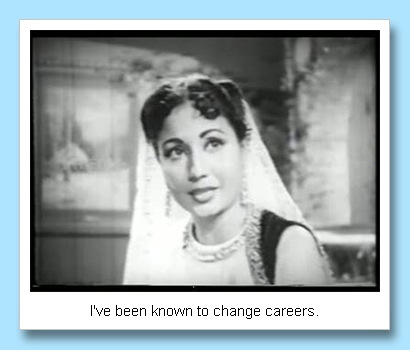 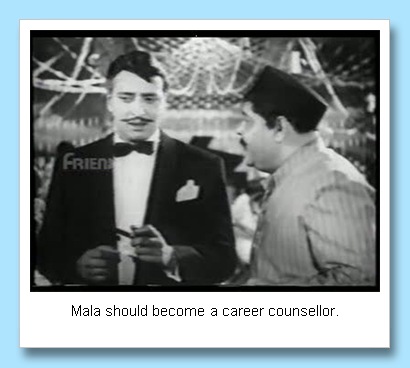 Funnily enough, Chand’s tragedy comes from another quarter! Ashok happily sits down to hear Chand’s poetry. Just outside Ashok’s house, a public meeting is in progress where Murad is reciting his poetry. When Chand begins to sing his verses, the crowd deserts Murad to stand beneath Ashok’s balcony! It IS Kishore - his poetry recital, even with just a harmonium and dholak, is very tuneful. Murad recognises his son’s voice and verse, and goes in to drag him out of the house of (potential) sin. In the ensuing scene, Chand is slapped by his Dad. The insulted Chand resolves to leave home and seek his fortune independently. Good friend that he is, Karim decides to accompany him. 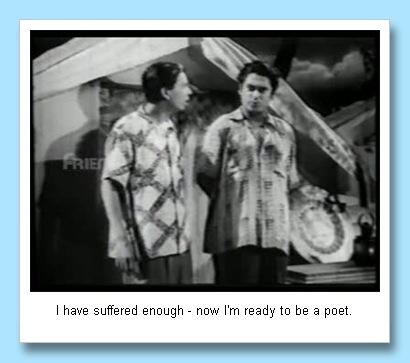 On the road to fortune, they have various adventures, before striking it rich. Among other things, they fall in with a gypsy band who speak pidgin Hindi. Karim takes a shine to the leader’s daughter Lali (Kumkum) and her predilection for sharp knives. When Chand and Karim decide to leave their gypsy friends and seek their fortune in the theatre, Lali comes with them. 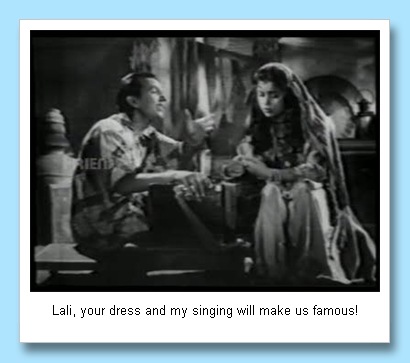 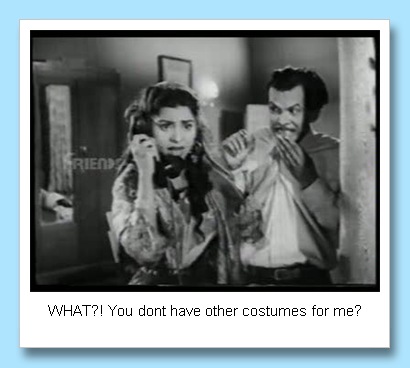 Next thing we know, the three of them are gainfully employed at Ashok’s theatre and Chand is stepping out with Mala - the star of Ashok’s company! The mystery is explained in disc 2. Mala had heard Chand’s open-air performance and brought his song into her act (so thats where Pritam and Anu Malik learned how to be… err… creative!). When Chand realised that, he staged a free open air performance outside Ashok’s theatre. He drew huge crowds and promised them free performances every evening. Ashok, worried at losing his audience, sent his manager (Gope) to Chand with an offer of employment in his theatre. 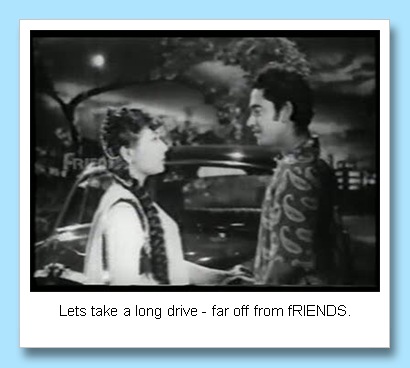 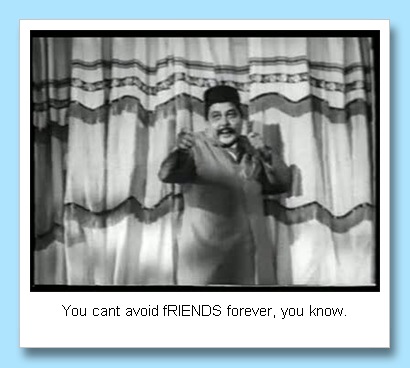 Chand managed to negotiate a great contract that not only gave him and his friends (Karim and Lali) big salaries, it also allowed him to call for rehearsals any time he pleased! (Our staff union could do with negotiators like him.) Considering that his fellow rehearsee was Mala, Chand was pleased to call rehearsals at odd times and at his home! And he made good use of his opportunities – Mala was soon as smitten with him as he was with her. 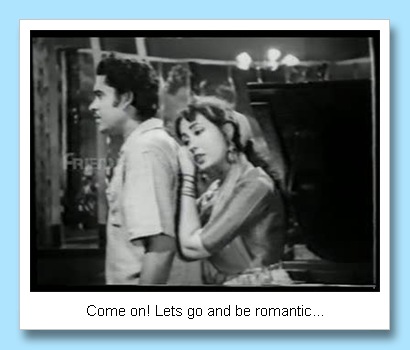 Poor Ashok – by the time he realises that his adored Mala is looking at a man, its already too late. He does his best to separate Mala and Chand. He horrifies Mala with an unwelcome declaration of love and then causes her to be imprisoned by her brutish brother Brij (Jayant). He dismisses Chand and spreads false tales about him to ruin his career. Nothing seems to go right for either of the lovers. Ashok is finally, gloriously, EVIL Pran, and manages to rain on all their parties. Will the two lovers ever get together? Will Pran take off his wig? Will Kishore stop trying to imitate K L Sehgal AND Rafi VERY badly? Thankfully for my ears, the answer to the last one is a resounding YES! For the rest, you will just have to watch the film yourself. 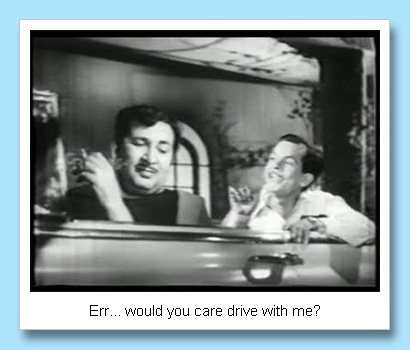 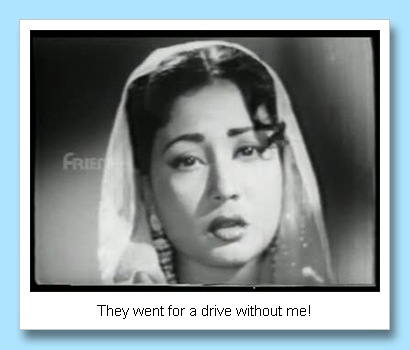 Meena Kumari was lovely in the film, but apart from a couple of dramatic scenes, doesnt really have a lot to do. The main action centres around Kishore and he is pretty good here. His acting is understated and his hijinks are very restrained. Plus, his dancing puts Meena’s in the shade! Johnny Walker was great as usual. Kumkum though, was totally wasted – she didnt get to show off her dancing much, and her pidgin Hindi got on my nerves. On the plus side, the songs were lovely (except for the one Kishore number) and there were lots of good moments of lighthearted humor. 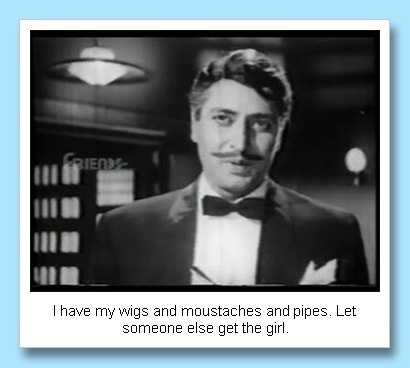 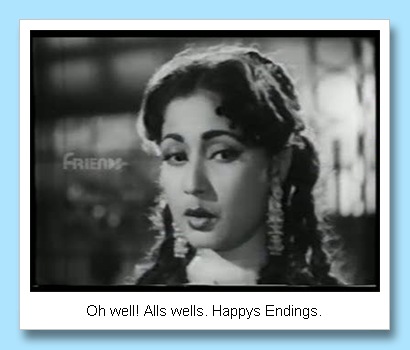 Overall, it was a pleasant film. Is it worth braving a fRIENDS VCD to watch it? Not unless you are a big fan of any of the principle actors!
Posted by Bollyviewer at November 12, 2009