Yes, you did read correctly. I’ve seen this movie thrice and realised that each time I’ve been fobbed off with an incomplete tale. The missing part has been bothering me for the last 10 years and I’ve finally decided to do something about it. If Karan Johar wont tell it to the world, I WILL! Before we go any further, though, I should warn you about spoilers. If you are the one person in the world who hasnt yet seen the film (and dont want it to be spoiled for you), now is the time to stop reading. Also:
**********Very long post Alert! Poll Ahead.**********
A quick recap of the story before I point out the missing bits: Rahul (Shahrukh Khan) and Anjali (Kajol) are best friends in college when a new girl in their class, Tina (Rani Mukherjee), upsets the cosmic balance. Tina is everything that Anjali is not – she is feminine while Anjali is tomboyish, she is cute and sexy while Anjali is “one of the guys”. Even more important for Rahul, she never even tries to beat him at basketball, something that Anjali does with ease. It doesnt take Rahul long to fall for Tina. Poor clueless Anjali - it takes Rahul’s practise proposal (yes the jerk actually practices on Anjali for his proposal to Tina!) for her to realise how much she loves Rahul. Too late! Rahul and Tina decide to get married. A heartbroken Anjali leaves college and Rahul-Tina’s lives. 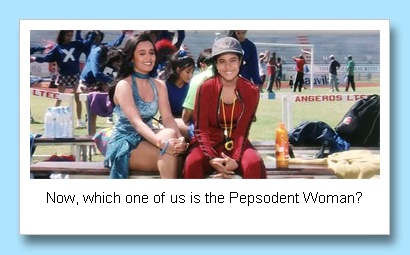 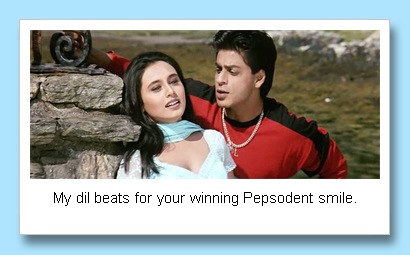 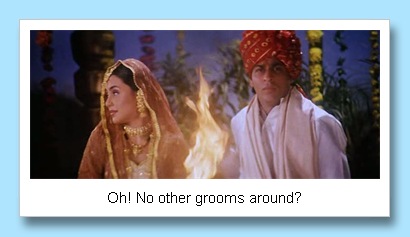 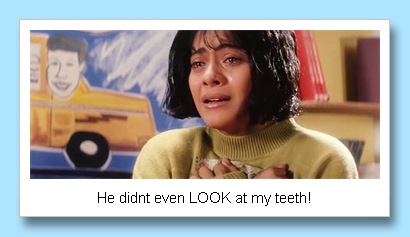 Fast forward 1-2 years -Tina dies in childbirth, leaving behind a sad Rahul and a daughter - Anjali. Fast forward some more years and baby Anjali is now annoying brat Anjali who gets regular letters from her Mom every year. Yes, Tina may have died unexpectedly in childbirth but she still managed to write several letters to her daughter and arrange for them to be doled out one letter per year. In her letters, she asks Anjali to get Rahul and his ex-friend Anjali together, since they were teenage BFF and deserve to be together as adults. Anjali sets out on her quest, and of course, accomplishes it in 2 hrs flat! It helps that grown-up Anjali has grown to be terribly feminine, chic and easily defeated at basket ball by Rahul – she has changed but Rahul’s preferences have obviously NOT. 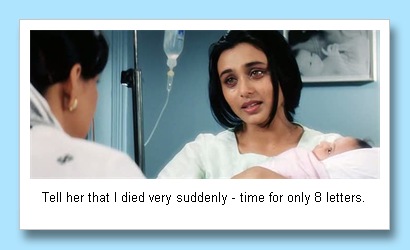 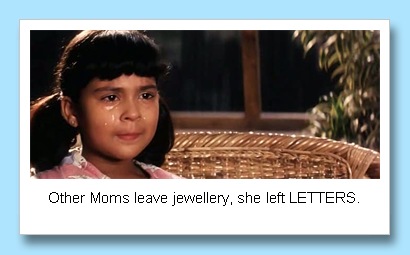 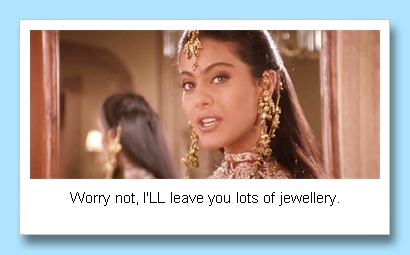 Which brings me to the missing part. The missing years in Anjali’s life, the decade between tomboy Anjali and butterfly Anjali. How did the transformation take place? Did she get Styled By Jury, get advise on What Not To Wear? Or did she audition for Indian Idol? Neither of the above. Anjali just lived and grew up and yes, FELL IN LOVE. How do I know? Coz Anjali told me about those missing years in her life. She is very upset with KJo for depicting her as someone who spent 10 years pining away for a teenage crush and then almost settled for Salman! So here is Anjali’s story, in her own words:

I came home from college heartbroken at Rahul’s marriage. Back at home, there was no time to pine. By the time I got home, Dad had passed away and Mom needed all my support. Dad’s investments hadnt been productive recently, and the family fortunes were dwindling. So I was too busy worrying over finances and job-hunting to have time to be properly heartbroken! 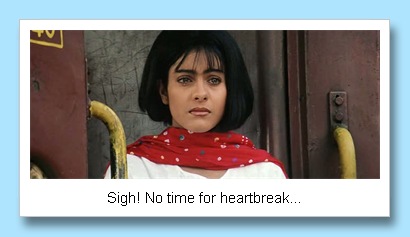 Luckily for me, Dad’s boss was willing to take me on as a trainee in his ad agency. And thats where I met Raj – he was handsome, mature (in outlook, not age!), caring and always opened doors for me. In short, he was everything that Rahul was NOT! Maybe it was the result of the new “professional” wardrobe Maa had insisted I buy. Maybe it was because he and I hadnt spent years hand-wrestling. Whatever the reason, to him I was never “one of the guys”. 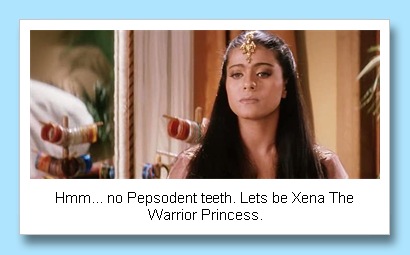 One evening, I ran into Raj in Archies Gallery, browsing for birthday cards. We began chatting and continued over a cup of coffee. That chance meeting led to meetings by arrangement and very soon I realised that he was becoming the friend that I had lost in Rahul and more, MUCH more! And when he gifted me a Shahrukh poster (from Archies) on my birthday, I knew he loved me too. When Raj’s Mom came over to our place to meet me and talk to Mum about our marriage, I was over the moon! Mum wasnt too keen on an ad-agency damaad, but changed her tune when she met Raj. 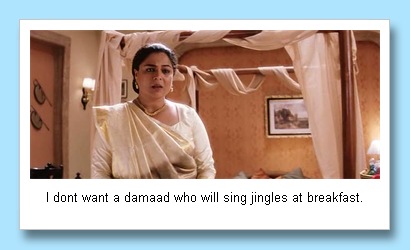 A lovely wedding and three happy years followed. Raj and I lived happily ever after - snuggling, bickering, dreaming grand dreams, having fun. Sadly, our happy life was cut short by one drunk truck driver behind the wheel of a speeding truck. The doctors said that Raj died instantly, without any pain. But there was no end to my pain. All our dreams of the future, our shared laughter, our planned children, all lost in a moment. My best friend gone for ever! 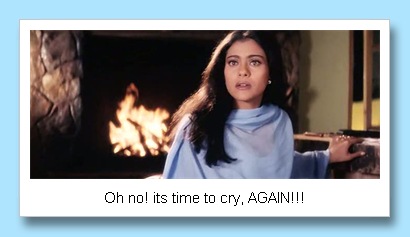 As they say, life goes on. Mama refused to let me give up, and my job was a big help. When Mala Aunty pushed me to work at their annual summer camp for children, I agreed just to stop her nagging. It was something that I soon came to look forward to, though. The children were fun and kept me too busy to think about anything else. And then there was Aman… But you know all about him and how I met Rahul again, and about darling little Anjali. 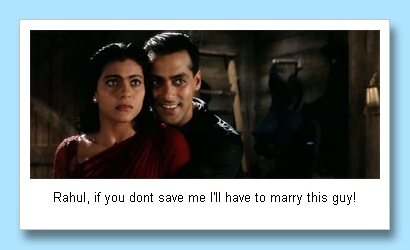 To each their own. Personally, I’d rather stay away from step daughters of the Anjali breed, but then, the two Anjalis perhaps bond over their shared name and Tina’s letters!
Thats the missing part that I wish KJo had also filmed, back then. If only wishes were horses… But I AM going to film this, at least in my fantasies, and you will help me. Lets assume its early 2000s and the film has to be cast, who would you choose to play Raj? Here’s a list of my favorite candidates (in no particular order).
Aamir Khan: My favorite 90s romantic leading man – he certainly had the looks and by late 90s, even the acting chops for it. This would be the kind of role he's never attempted and we all know how much Aamir loves a challenge! 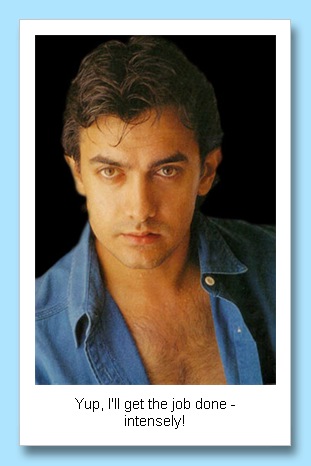 Akshay Kumar: Yes, this Khiladi Kumar, CAN do the sensitive, mature, romantic lead. Check him out in Yeh Dillagi where he carried it off so well! AND he is soooooo good looking, too. No I am not getting carried away, the script does require a good looking Raj! 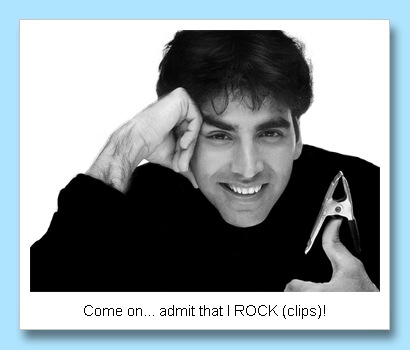 Saif Ali Khan: My favorite 2000s leading man, he sure can act and once Dil Chaahta Hai happened, he magically had the looks, too! Though his career hasnt exactly been littered with roles distinguished for their mature and sensible character, I am sure Chhote Nawab is capable of playing something other than the clueless but adorable idiot he specialises in. 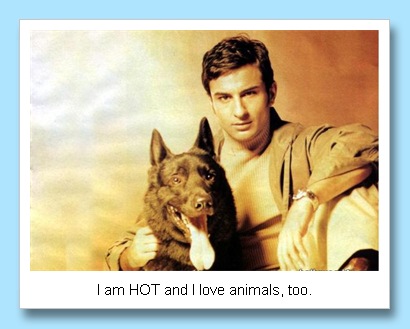 Hrithik Roshan: The looks, he has them in plenty, and his dancing skills are to die for. Who needs acting from such a pretty face? Not ME! :-D Not that I think he is a complete slouch in the acting department, but one forgets the need for that when faced with that fair-and-lovely face. 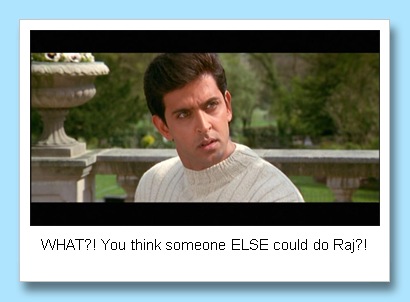 Abhishek Bachchan: The dark horse. Not in the same league acting-wise as Saif or looks-wise as Hrithik, but there is something about him that is soooo appealing. Also, he has previous experience in the kind of role we are casting - he did the mature, loving boyfriend/hubby in Hum Tum so well. Plus, he seems like a fun guy to hang out with - definitely boy friend material back in the early 2000s, wouldnt ya say? 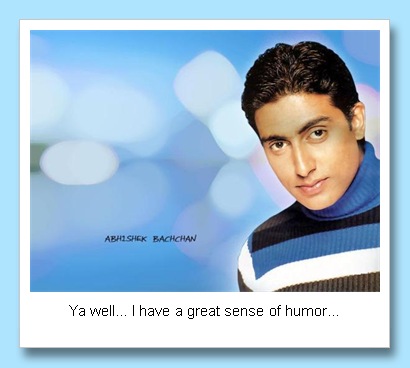 Which of these according to you, would make the best Raj? Anybody else you’d choose to sweep Anjali off her feet? Do cast your vote – we need to get my fantasy prequel/sequel cast as quickly as possible!
Posted by Bollyviewer at November 15, 2009