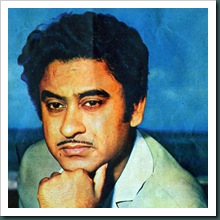 Kishore Kumar, the singer, is more often identified with the 70s and 80s when he ruled supreme in Hindi film music. Most of us, myself included, tend to forget that he was singing much before that and had tons of great songs in the 50s and 60s. It was Dustedoff’s awesome post on SD Burman songs that reminded me of how many lovely songs Kishore Kumar sang under SD’s direction in the B/W era. And it wasnt just SD Burman, Kishore sang for a lot of other music directors too, and also composed some beautiful music of his own. As I mused on my favorite Kishore numbers, I couldnt resist drawing up a list of them.
Weeding out only 10 from his vast array of songs was a long and hard process. To begin with, I decided to stick to his songs from 50s and 60s B/W films - decades that tend to have more of my favorite songs and also where I like Kishore da’s voice better. That still left a few hundred songs! Enter condition number two - they couldnt be the wacky numbers full of verbal acrobatics that he was famous for. So, romantic, pensive, serious, sad and philosophical songs were called for. When even that didnt help, I had to add a further condition – they had to be the first 10 songs I could recall and which fit the limits I had set myself. Voila! I had myself a list, and here it is, in no particular order (also in a youtube playlist):

1. Aa chal ke tujhe main leke chaloon (Door Gaga Ki Chhaon Mein, 1964) This one is unusual in that it comes from a film that Kishore da not only produced, directed and acted in, he wrote the lyrics for this and composed the music too! He certainly was an all-rounder in the entertainment field. But its novelty value apart, I just love the song for its beautiful lyrics and Kishore da’s rich baritone. He sings the entire song at the same low pitch and in a simple tune, and yet, the voice is music all over! And the lyrics are lovely – come let me take you to a land where there are no sorrows and tears, and where love reigns supreme. It leaves behind such a feeling of serenity and quite happiness…
2. Yeh raatein yeh mausam (Dilli Ka Thug, 1958) with Asha Bhosle. Music director: Ravi, lyricist: Shailendra.
A favorite of mine from late night Chhaya Geet on All India Radio, its a soft romantic number, picturised on Nutan and Kishore. Nutan’s luminous beauty would prompt anyone to burst into, “These nights, this weather, the river side, this lovely breeze.” and Kishore is no exception. Of course, he is lucky enough to have her sing back to him that her heart is pledged to him. Way to go, Kishore da! The song’s pull is such that even on a cold night in Canada’s Arctic winter, I have no problem humming joyfully along with Kishore-Asha about the lovely weather and the beautiful breeze!
3. Ami chini go chini tomaare (Charulata, 1964) Music director: Satyajit Ray, lyricist: Rabindranath Tagore.
One thing you can never take out of a true Bengali, and that is Rabindra sangeet (songs written and composed by Rabindra Nath Tagore) – as Kishore da demonstrates in this Bangla song written by Tagore and set to music by Satyajit Ray. Though I cant follow the lyrics without the subtitles, the simplicity of the composition and Kishore’s deep voice always gets to me. And I love the way it starts out, with Soumitra Chatterji carelessly humming while he strikes a few chords on the piano - it just showcases Kishore’s voice beautifully without embellishment from a whole orchestra.
4. Meri neendon mein tum (Naya Andaz, 1956) with Shamshad Begum. Music director: OP Nayyar, lyricist: Jan Nisar Akhtar
This one surprised me when I heard it first, years ago. For one thing, Kishore’s voice has a subtle nasal twang to it that matches very well with Shamshad’s earthier voice. I was even more surprised to see it picturised on a happy Meena Kumari (those of you more familiar with her tragic roles and 60s films might share my surprise, too). Its not a song that lends itself to the waltzing that Meena-Kishore seem to be indulging in onstage, though. But hey – if Meena keeps seeing Kishore in her sleep, in her dreams, and is lost in her love for him, (thats what she’s singing) she is entitled to waltz with him, when awake!
5. Thandi hawa yeh chandni (Jhumroo, 1961) with Asha Bhosle. Music director and lyricist - Kishore Kumar.
Another example of Kishore Kumar’s jack-of-all-trades-entertaining, this one is picturised on him as well as written and set to music by him. And its yet another “night song” – this one has Kishore exhorting his heart to tell a story in the wake of the cool breeze and pleasant moonlight. Huh! Come to Canada Kishore da, and I’ll show you cool breezes!! In the meantime, croon on. Even if your heart doesnt respond with a story, Madhubala is intrigued.
6. O nigahen mastana (Paying Guest, 1957) with Asha Bhosle. Music director: SD Burman, lyricist: Majrooh Sultanpuri.
A lovely, romantic number, picturised on Dev Anand and Nutan, who seem to be flirting on a rooftop terrace AT NIGHT. Hmm… I am beginning to believe that Kishore does all his wooing at night! Also, please note Nutan’s reaction – she is dumbstruck by the combination of Dev Saab’s beauty and Kishore’s intoxicating voice, and can do no more than hum in time with him!
7. Chhota sa ghar hoga (Naukri, 1954) with Usha Mangeshkar. Music director: Salil Chowdhury, lyricist: Shailendra.
This has lovely lyrics, “We’ll have a small house in the shade of the clouds, this mad hope keeps singing within me.” The lyrics then go on to describe the modest hopes of the singer in loving detail and gentle humor. Kishore sings it with touching sincerity and playfulness. And the icing on the cake is Salil Chowdhury’s lovely music that somehow manages to be simple and complicated at the same time – simple melodies with complicated orchestration (does that even make sense?).
8. Ek nazar kisine dekha (Rangoli, 1962) with Lata Mangeshkar. Music director: Shankar-Jaikishan, lyricist: Shailendra.
One of his few duets with Lata in the B/W days, this one is a lilting dance number with the singing accompanied (most appropriately) by Vyjayanthimala’s excellent dancing. Kishore claims that she saw him once and his heart went mad, a simple thing that became a big story. Well, Kishore da, Vyjayanthimala’s glances seem more like glares to me, and I dont blame her. You’re interrupting her divine dance with your prancing - just stick to singing and she will come around, eventually!
9. Yeh char din bahar ke (Rukhsana, 1955) with Asha Bhosle. Music director: Sajjad
A lovely romantic number that I came across recently in a collection of rare Kishore duets, its become a big favorite. Its clearly an earlier example of Kishore’s singing as you can detect a nasal quality to his singing. Asha Bhosle (I think its picturised on Meena Kumari, but cant find the video) and he are urging each other to forget life’s sorrows, and spend the few days of spring in happiness and laughter. I am game for it. Are you?
10. Aankhon mein kya ji (Nau Do Gyarah, 1957), with Asha Bhosle. Music director: SD Burman, lyricist: Majrooh Sultanpuri.
Picturised on Dev Anand and Kalpana Kartik, this lilting romantic number puts lover’s questions and answers to such good use:

I love it for the peppy and flirty lyrics, Kishore-Asha’s joyful voices and the lilting score. The picturisation is also very pretty with Kalpana-Dev running around in a bucolic setting. It would, I think, take a lot of resolution to dislike this song!
Posted by Bollyviewer at October 03, 2009