Sometimes the simplest of plots, with minimal twists, can make for very effective thrillers. Thats the case with this film, which I received from fellow oldies fan Shalini. With Shalini’s cautionary words ringing in my ears and my own misgivings born of previous experience with Meena Kumari-Dharmendra pairings, I approached the film with great trepidation. To my delight, it turned out to be a gripping thriller that had me glued to the TV screen well into the wee hours of morning! 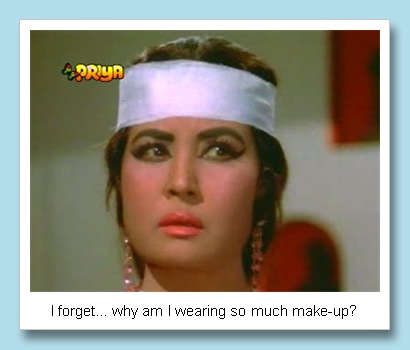 Nanda Roy (Meena Kumari) wakes up from a minor accident and claims to be someone else. She is convinced that she is Radha - Nanda’s sister who actually died 16 years ago. She refuses to recognise her own daughter Nalini (Farida Jalal), and throws her husband Subodh (Rehman) into confusion by calling him Jija-ji (sister’s husband). Things get even weirder when she claims to be living in Bombay and of having received her injury on the eve of her wedding to Ram Kumar. Subodh and Nalini try in vain to convince her that she’s been living in Darjeeling for two decades and all the local people recognize her. 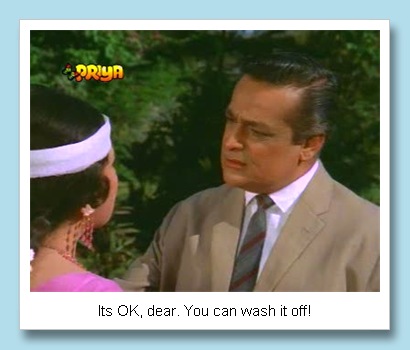 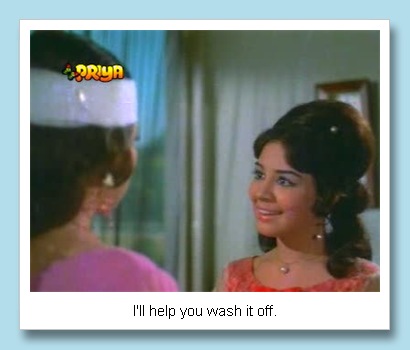 Subodh patiently keeps trying to remind her of their shared past, but Nanda is unconvinced. She is Radha and thats who she is staying! A worried Subodh brings in psychiatrist Dr. Rajesh Khanna (yes really - and played by Dharmendra at that!) whose examination agitates Nanda no end. It would agitate me too, if a shrink started to diagnose my mental condition by examining my blood pressure! 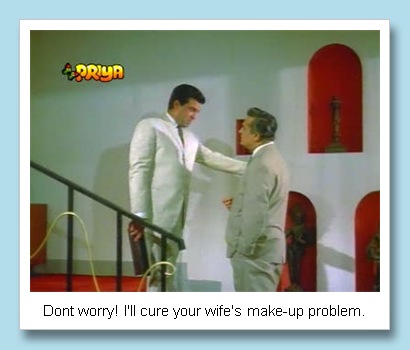 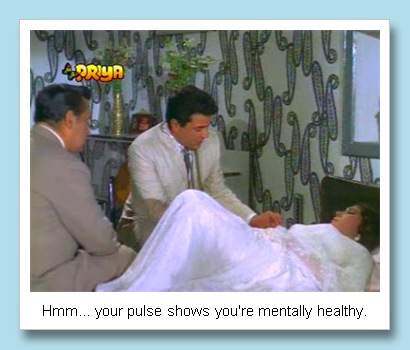 Nanda’s behaviour gets more erratic as the days go by. When Subodh takes her to their club for an evening out, she refuses to recognise long-time acquaintances. Then, she walks out in the middle of a great cabaret number and almost drives into oblivion, bumper first. Only Dr. Rajesh’s timely intervention saves her. If that isnt enough, she hears sounds at home and even sees a dead body fall out of her closet! When Subodh and Dr. Rajesh rush to her room in response to her shrieks, there is no dead body. 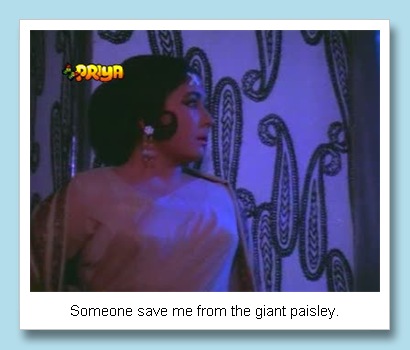 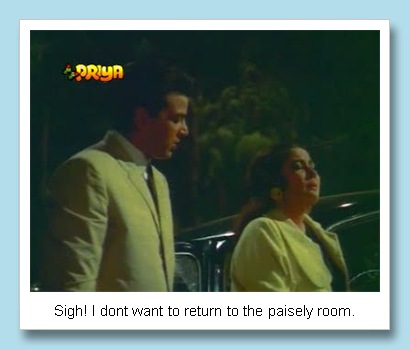 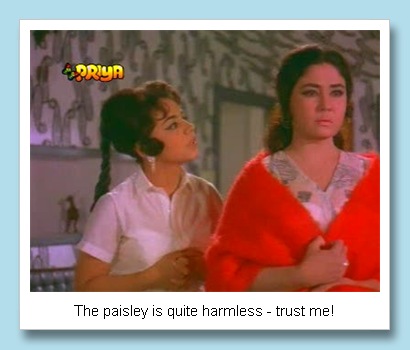 Subodh is distraught. Their daughter (Nalini) is engaged to be married to the scion of one of Darjeeling’s patrician families. Nalini’s prospective father-in-law (Wasti) takes fright at her mother’s insanity and refuses to let his son marry into a tainted blood-line. Subodh has to promise a very hefty dowry to make sure that the marriage does go through as planned. But he is worried that Nanda’s problem will get worse, and seeks Dr. Rajesh’s help. 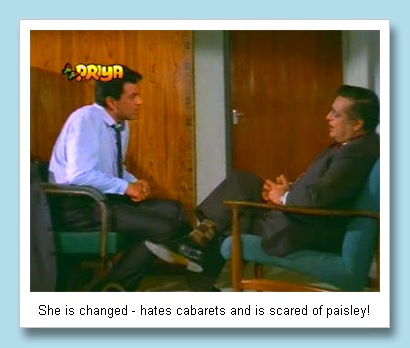 Rajesh runs some tests (electro-diagnosis!) and pronounces Nanda’s mental faculties in good working order. He does recommend a change of scenery to help her relax, though. So, once Nalini’s marriage is safely over, Subodh takes her to Bombay – the place she insists is her home. She wants to establish her own identity to everybody’s satisfaction. Unfortunately, the only past acquaintance she can find - Radha’s fiance Ram Kumar - doesnt remember either sister well enough to help. 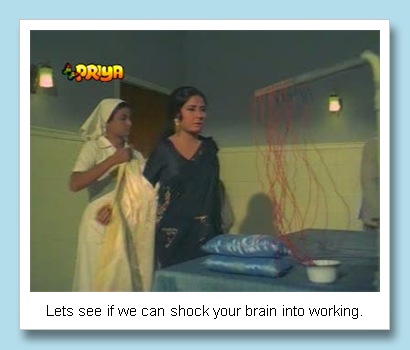 A broken-hearted Nanda returns to Darjeeling. Rajesh is moved by her passionate insistence that she is Radha, not Nanda. From empathising with her identity-crisis and trying to treat her mental condition, he moves to falling in love with her! That little detail, of course, convinces him of Nanda’s claims. He institutes further inquiries – none of which uncover anything useful. 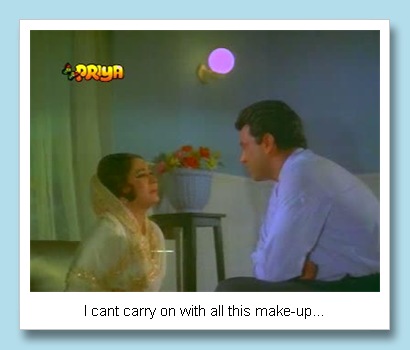 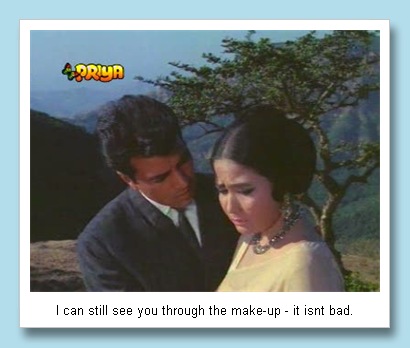 So what really is going on? Is Nanda really Radha? Or has a head injury brought out past trauma of her family’s death (Nanda’s parents perished in the same accident that killed Radha) and made her mentally unstable? Or perhaps there is some skullduggery afoot? If so, what is it? 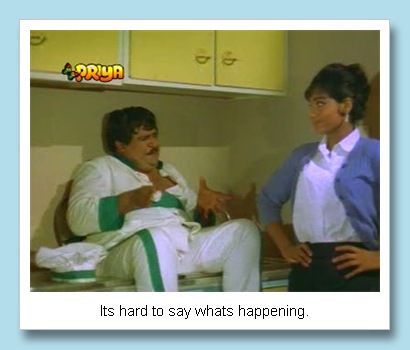 This one goes on my list of favorite amnesia thrillers! The plot is very well executed, and the narrative keeps you off-balance enough that you dont guess where its going. Rehman is very good as the bewildered, helpless Subodh. There is no doubting his affection for his wife, throughout the film. Dharmendra is very charming as the sympathetic doctor, but not too convincing in the romance bits. The mainstay of the film, however, is Meena Kumari’s Nanda. The effects of Meena Kumari’s heavy drinking were very pronounced here, and blunted her facial expressions a great deal. So it isnt one of her better performances – but its competent enough. 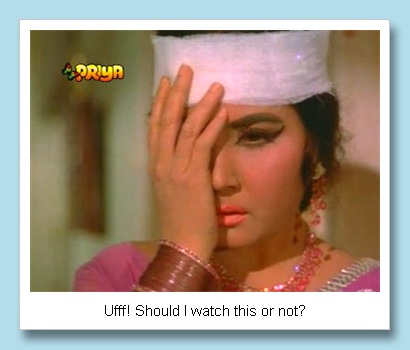 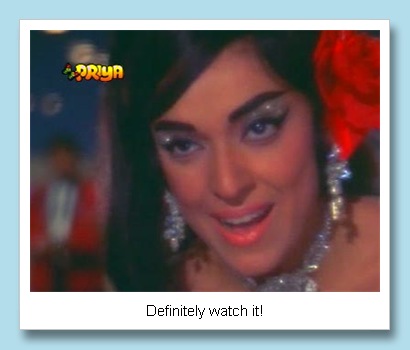 There are some minor irritants like the pointless comic side-plot (Polson and Shefali) which is mercifully brief, and some loose ends not tied up in the end. The major flaw though, is the Meena Kumari-Dharmendra romance which is very unconvincing and quite unnecessary for the plot to develop further. These quibbles apart, its a pretty watchable thriller.
Posted by Bollyviewer at August 13, 2009