Long before cancer studies woke up governments to the harmful effects of tobacco, there was one person who, singlehandedly and tirelessly, crusaded against smoking. This wise person is none other than my favorite comedian, Johnny Walker. What? You dont believe me?!! All ye doubters, check out Amar Deep for proof of this great man’s war against smoking. 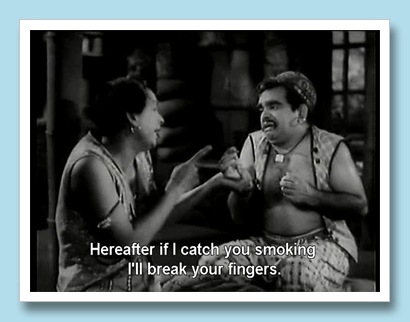 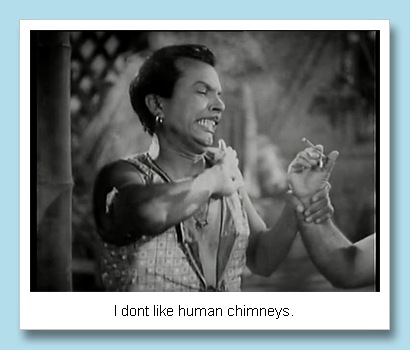 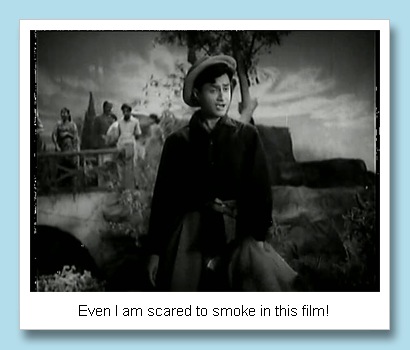 Aruna is a lovely, if somewhat spoilt, rich young woman who loves to dance. Pran (Pran) - her arrogant housemate and her father’s (Bipin Gupta) adopted son - views her interest in dance and music as unhealthy and never fails to make a nasty point of it. From the very fact that he is PRAN and looks like he swallowed a ton of be-nasty tonic before breakfast, we know he is the villain. And we soon find out how he dares to lay down the law in Aruna’s home. Aruna’s Dad had promised his dying friend (Pran’s father), that he would get Pran and Aruna married. 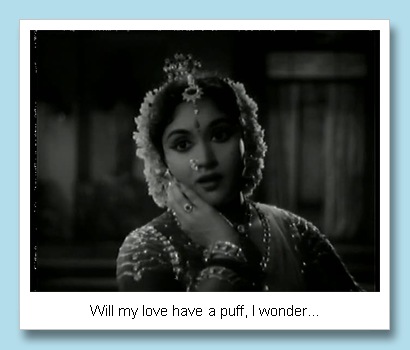 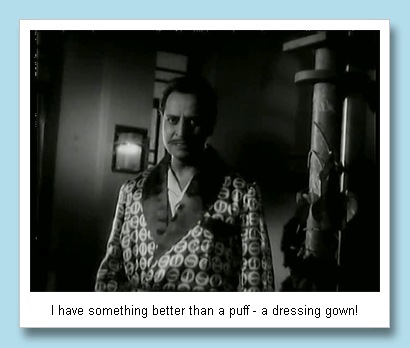 When Aruna is told about about her childhood engagement, she takes to her heels and doesnt stop running till she reaches a comfortable bed in a broken-down bus! The bed’s owner - Ashok (Dev Anand) - considerately allows her to sleep undisturbed all night, and then wakes her with a cup of tea in the morning. Aruna doesnt appreciate his culinary skills, but with the farsightedness of an intelligent woman, falls for a man who serves bed tea. 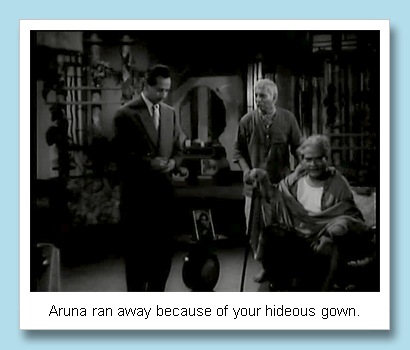 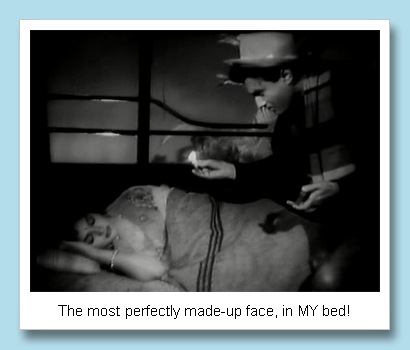 Their romance is unintentionally hilarious as both spout very flowery romantic sentiments with wide-eyed intensity! But its Dev-Vyjayanthi after all. One cant help being won over by their combined charms! The romance doesnt get time to flourish beyond a lovely song and flowery speeches, when Pran finds Aruna. He drags her home in his expensive car with Ashok gamely sprinting after it. Poor Ashok’s chances of setting a new world record for sprinting are lost when he gets into an argument with a truck. Sadly, our hero comes off worst in the argument, and needs urgent medical aid. 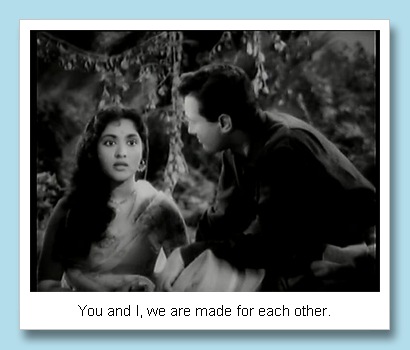 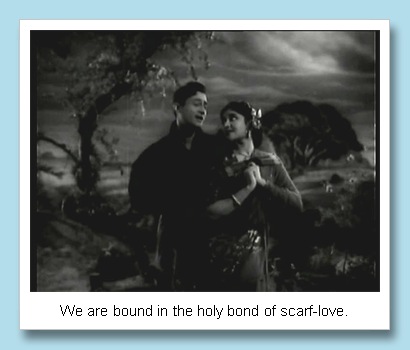 When Ashok comes around, he has lost his memory! He wanders around in a daze of incomprehension and sadness at his forgotten identity. He does surface once in a while to rescue the odd helpless person. One of his recuees is a beautiful gypsy performer Rupa (Padmini), whom he saves from a very nasty accident. She and her family – sister Champa (Ragini) and father (David) – are very grateful and make Ashok welcome in their midst. Rupa falls for him and her feelings are reciprocated by Ashok who has completely forgotten Aruna! Clearly, constancy thy name is NOT Ashok. 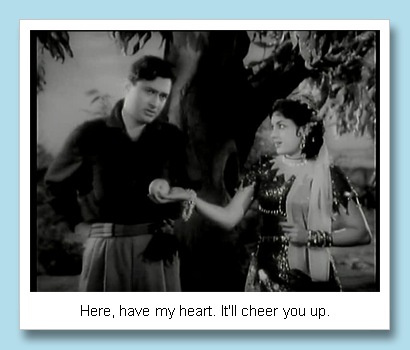 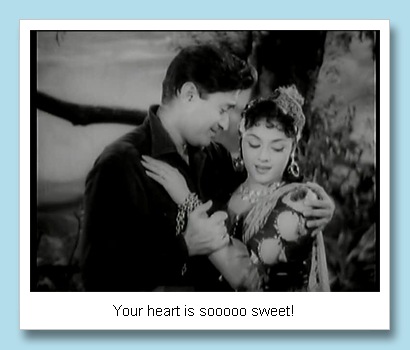 Aruna however, hasnt forgotten Ashok. Her father’s death leaves her sad, but she hasnt lost hope of re-uniting with Ashok. Fate plays into her hands when Ashok joins her factory as a worker. Pran beats one of the workers, seriously injuring him. Ashok carries the injured worker to Pran’s home to protest, and Aruna saves the situation by calling the doctor and doling out sympathy. Ashok doesnt recognise her and treats her as only an outraged worker in a filmi factory can treat the factory’s owner. Poor Aruna! She follows Ashok home only to find him with Rupa. What is left for Aruna to do but to sing a sad song? (I would have recommended the fail-proof filmi cure for amnesia – a judicious knock on the head.) 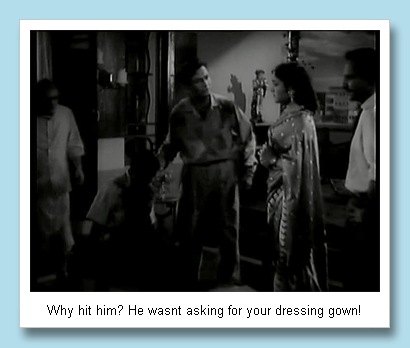 Aruna is not the only one saddened by the Ashok-Rupa romance. There is Ustad (Johnny Walker), a fellow gypsy, who is madly in love with Rupa. He’s been trying for several years to get Rupa to notice him, but to no avail. Champa, Rupa’s sister, loves him, but he has eyes only for Rupa. This, as you may have gathered, is the comic side plot. Ustad tries various stratagems to win over Rupa, including taking help from sadhus and soothsayers, trying black magic, etc. All the poor man gets for his pains is Champa’s tongue lashings and nasty skin troubles! 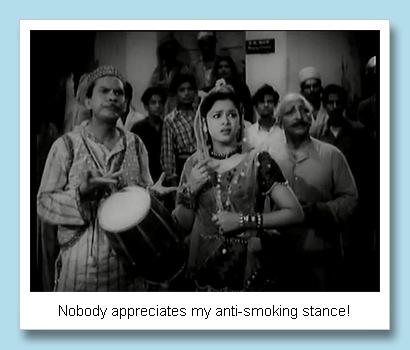 So lets account for the various love-interests - Pran wants Aruna who loves Ashok who loves her AND Rupa. Champa loves Ustad who loves Rupa who loves Ashok. See, I told you! Everybody loves everybody else. Unfortunately, it doesnt make for world peace! So who ultimately lands up with whom? That would be telling. Go find out yourself! 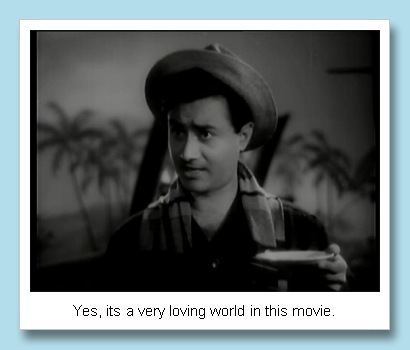 The story is pretty fast-paced and dramatic (lots of NAHIIIINs), and there are some very lovely songs (check them out here). My favorite is the haunting romantic number Dekh humen awaaz na dena, and the satirical Lene se inkaar nahin which also has some beautiful dancing by a child artist. The other songs are also very good and have some great dancing by Padmini and Ragini as well as Vyjayanthimala. 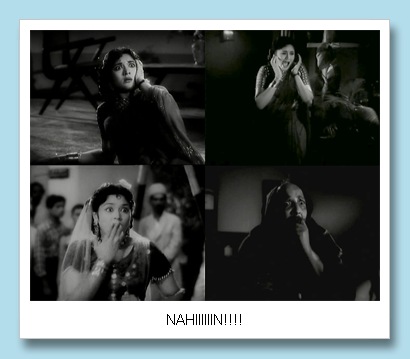 Its not a movie distinguished by subtle and powerful acting - Vyjayanthimala and Padmini compete for the hamming stakes and between them, succeed in making Dev Anand look like a good actor! Almost everybody sports at least one NAHIIIIIN face, except Pran who does more sulking and lashing out than any evil villainous deeds. The dialogues, for the most part, are fairly flowery, except in the comic side plot where they are actually quite funny. 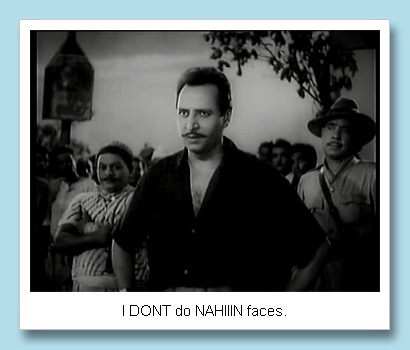 All in all, its a fun time-pass movie with beautiful people and lovely songs-n-dances.
A BIG thank you to Richard whose write-up inspired me to get this film.
Posted by Bollyviewer at July 27, 2009