I chose this one with my usual meticulous care and eye for a good movie. In other words, I took one look at Vinod Khanna+Neetu Singh on the DVD cover, gave a fan-girl squee and rushed to buy it, not bothering about the synopsis or other cast members. In the event, my hope that Vinod+Neetu would make up for every deficiency in the film wasnt quite fulfilled. There werent that many deficiencies to overcome! Its a fast paced swashbuckler, full of beautiful people, lovely songs, thrilling twists, and of course, tons of swordfights. 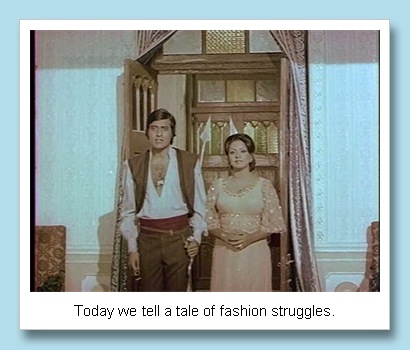 Right from scene one, I knew I was going to love it. A wounded man (Kader Khan) riding hell-for-leather and carrying a baby on his back, succumbs to his wound, but not before he’s done his duty. He takes time off from his death throes to hand over his master’s son to a gypsy chieftain - Basha Khan (Om Shivpuri). The master was Maharaja Uday Singh of Ajaygarh, who’s been foully murdered by Durjan Singh (Amjad Khan). The child is Vikram Singh, the heir apparent. The loyal servant and the Maharani (Urmila Bhatt) escaped with two princes. After a chase and a savage sword fight, the number of princes was drastically reduced to one - the Maharani plus one son plunged into a river. 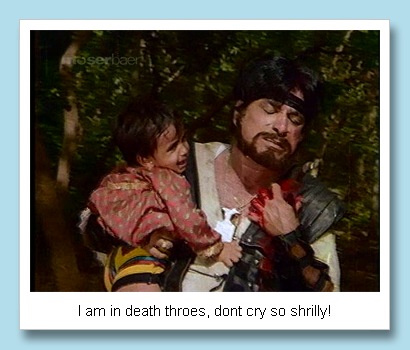 The appropriately named Durjan Singh (Durjan = bad man) and his assistant Zaalim Singh (Zaalim = cruel) scour the kingdom for the missing princes. One is believed drowned, while the other is saved by Basha Khan at the cost of his own son. 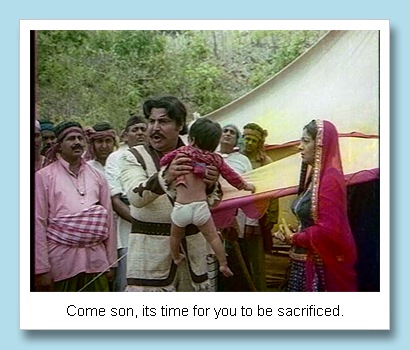 Durjan Singh goes on to have a long and cruel reign while Vikram is brought up in the gypsy clan and kept in ignorance of his heritage. He is given a lot of sword training, though, and grows up to be Vinod Khanna! Err… I meant Vinod Khanna plays the dispossessed crown prince and shows off in the sword fights to great advantage! (I cant help but wonder why swashbuckling heroes do not get shooting, or even archery training.) 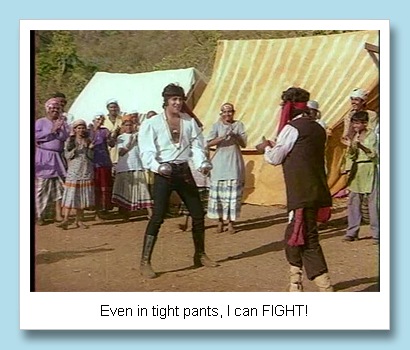 Vikram’s swashbuckling training stands him in good stead when he tangles with the military escort of visiting princess Ratna (Neetu Singh) in an effort to save a helpless old man and woman. The princess takes one look at Vikram’s sword arm, and tells her soldiers to desist. In a traditional masala twist, the helpless old woman is none other than the former Maharani - his own mother! So she is alive?!! What about her other son? 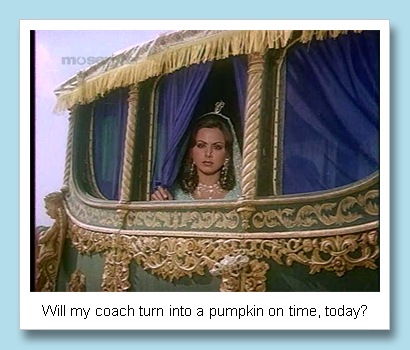 As the cruelties of Durjan Singh against his people mount, Vikram Singh asks Basha Khan why he isnt allowed to fight the king. Basha Khan finally reveals the secret of Vikram’s parentage. An enraged Vikram decides to seek vengeance for his lost family. He sneaks into the palace to murder Durjan Singh. Alas, Durjan Singh is well supplied with security precautions and Vikram has to retreat in some disorder. While escaping from the palace guards, he finds temporary shelter in Ratna’s quarters. 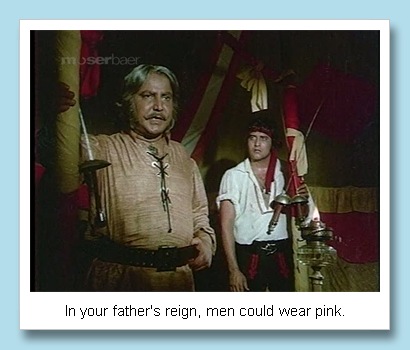 Ratna not only saves him from the palace guards, she also tells him her sad story. Durjan Singh wants to annex her father’s kingdom by forcing a marriage between her and his son Veer Singh (Jagdeep). Vikram pledges to help her out and promises her a princely hand in marriage. Ratna would, of course, be quite content with Vikram Singh! 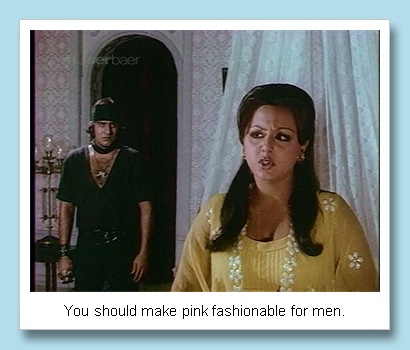 A chastened Vikram returns home where Basha Khan’s wiser counsel prevails. He is persuaded to win over both the king and his oppressed people, alike, before trying to claim the throne. As Vikram the brave knight, he wins over everybody with his fighting prowess in a chariot-fight-tournament. He also wins Durjan Singh’s trust by rescuing Ratna from Daaku Sangram Singh (Danny), who turns up to fight at the same tournament. 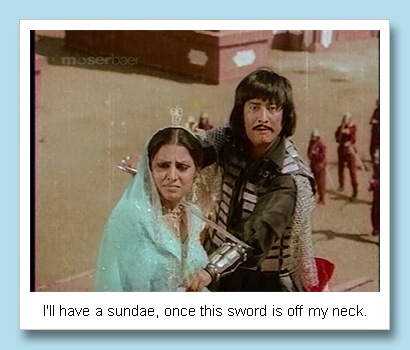 The grateful Durjan Singh hires Vikram to give Veer Singh fighting tutorials. Since Veer Singh is more interested in the company of his wife-to-be – Ratna - than in tutorials with Vikram, the two lovers get to spend time with each other while the gullible Veer thinks his romance is going forward! 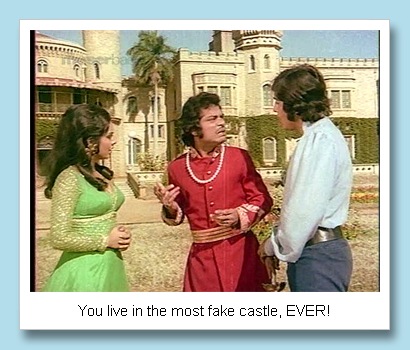 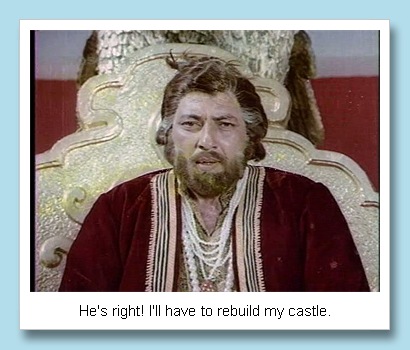 Through all this, Vikram hasnt forgotten his vengeance. Basha Khan and he decide to organise an armed resistance and to finance it through Durjan’s treasury! They kidnap Ratna in the name of Daaku Sangram Singh. Durjan Singh selects Vikram to deliver the ransom. When Sangram hears of this, he decides to investigate. Sangram and Vikram end up collaborating on an elaborate scheme to defraud Durjan Singh of some more of his ill-gotten wealth. 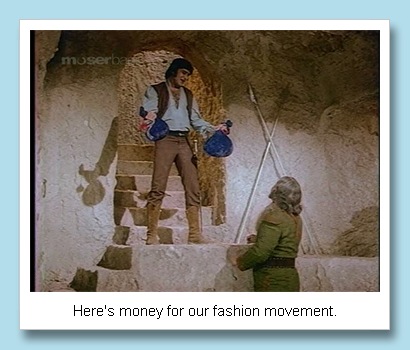 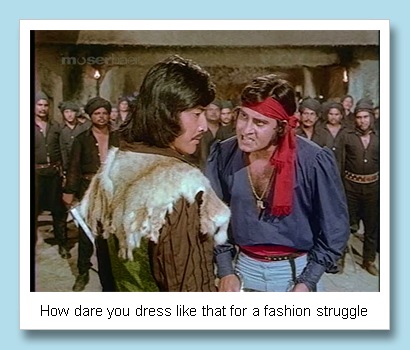 But is a Daaku to be trusted with matters of national importance? Will Durjan find out that the heir he thought dead would come back for his pound of flesh? Can Vinod+Neetu look any prettier? Will Vinod’s tight pants stop blood circulation in his limbs? Go visit Ajaygarh and find out. While there, dont forget to check out Vinod-Neetu romancing on the water front: Mere pyaar ki awaaz pe. 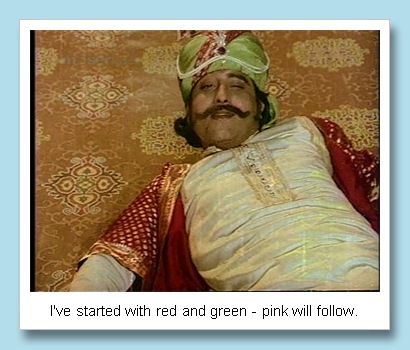