Last week I saw Ghosts of Girlfriends Past and came away with the firm conviction that when it comes to being whacked over the head with a moral, I prefer my moral to come wrapped up in Hindi, with songs-n-dance, and 60s/70s fashion. Clearly, I needed to go back in time. While in the 70s, I happened to come across this Anari which is NOT the Raj Kapoor one, nor is it the more recent Karishma Kapoor one. Its a little known romantic thriller directed by Asit Sen and stars some of the most beautiful people of the 70s – Shashi Kapoor, Sharmila Tagore, Kabir Bedi and Moushumi Chatterji! Aside: There seem to be too many Anaris in the Kapoor clan! (Anari = inexperienced/silly) 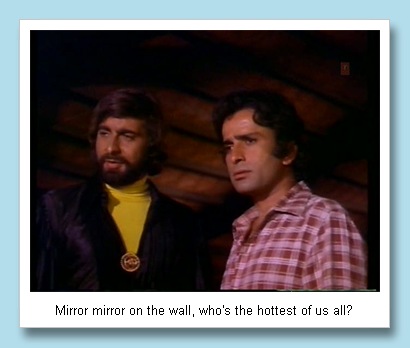 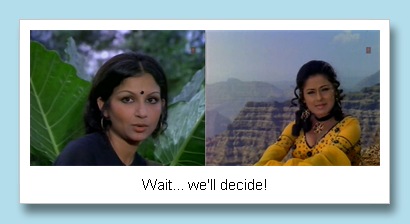 Raja (Shashi Kapoor) is a charming layabout who spends most of his time hanging out with his cronies and refusing the less-than-honest employment offers of old friend Vikram (Kabir Bedi). When he isnt busy impressing a rich passerby - Arjun Malik (Utpal Dutt) - with his acting skills, he is spending quality time eyeing his beautiful neighbour Poonam (Sharmila Tagore). Poonam takes an equally keen interest in Raja’s doings and spends a lot of time dimpling at his antics. After some cute maneuvering on Raja’s part and much dimpling on Poonam’s part the two embark upon a romance. 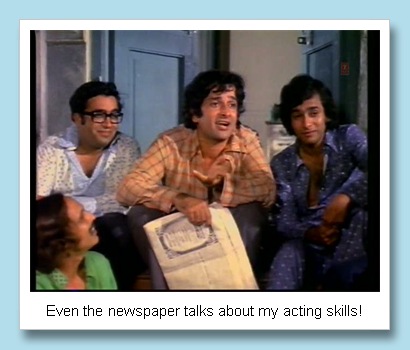 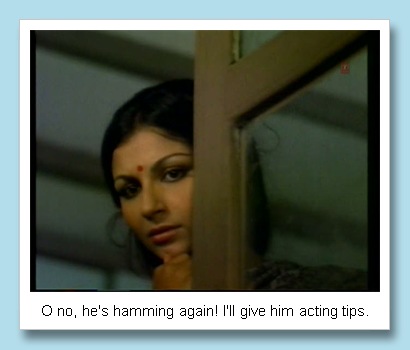 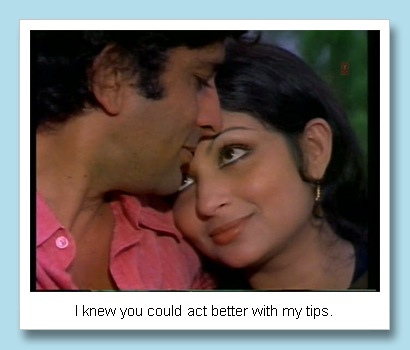 All doesnt go smoothly for the lovers. From the beginning, the vast difference between his fantasies and hers (he imagines a cotton-saree-clad sindoor-adorned-wife while she dreams of glamorous clothes, jewels and fast cars) doesnt exactly portend compatibility. And trouble at home soon breaks up the burgeoning romance. Raja’s union-leader brother - Viren (Kader Khan) - is knifed during a strike, leaving Raja in the position of being the family’s sole breadwinner. Throw in the 70s staple of unemployment, vidhwa maa, and kunwaari behen (widowed mother and unmarried sister) and poor Raja is quite unhinged with worry. 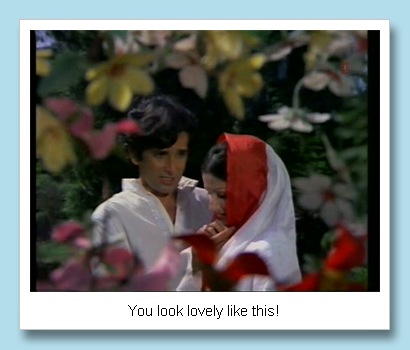 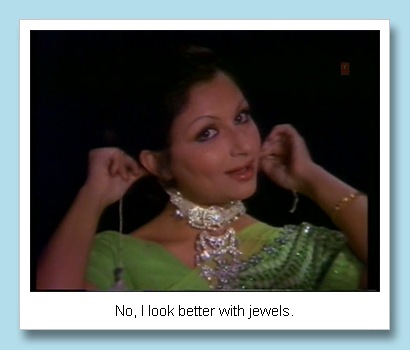 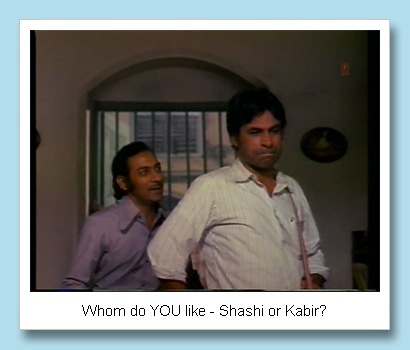 Poonam has her own problems – a drunkard father and an ailing mother. As they say: when poverty knocks on the door, love goes out of the window. A series of misunderstandings later, Poonam is riding off into the sunset with Vikram on his bike, while Raja is enmeshed in a deadly web. I personally feel that Poonam is smitten with Vikram’s hot good looks (and who can blame her?) and the brokenhearted Raja’s judgment is severely impaired as a result. How else can you explain his acceptance of Arjun Malik’s offer? 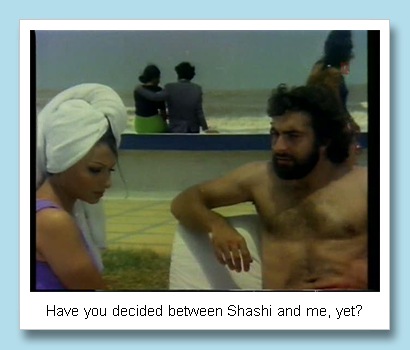 Arjun offers Raja twenty grand to impersonate Amit Rai (Anil Dhawan) and romance his (Amit’s) affianced bride Rashmi (Moushumi Chatterji). The reason? Rashmi is the daughter of Arjun’s adoptive parents, Mr. and Mrs. Malik (Harindranath Chattopadhyay and Anita Guha). She was betrothed to Amit while both were children and they havent met as grown-ups because Amit has been living abroad. Grown up Amit has – unbeknownst to the Maliks - turned into quite a libertine and Arjun wishes to save Rashmi future heartbreak by getting her a substitute fiance! 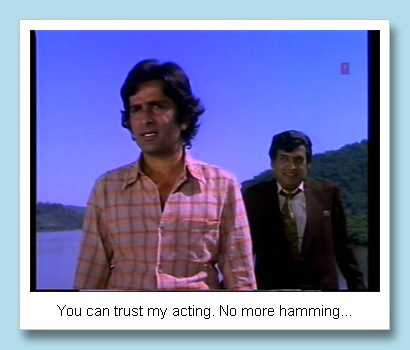 Raja is clearly unhinged since he swallows the whole story and is more than willing to participate. He helps lure Amit into the clutches of Arjun’s men and then proceeds to impersonate Amit with great gusto. Rashmi is delighted with her fiance and Raja falls head-over-heels for her. 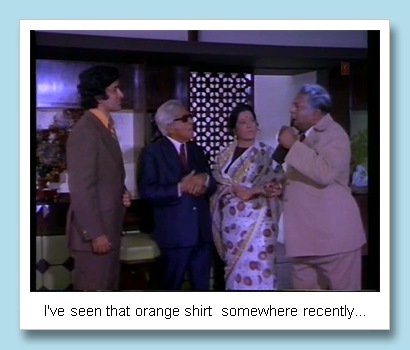 Now that he is firmly enmeshed in Arjun’s web and all set on the path of love, Raja finds out Arjun’s true designs. Anybody with a smidgen of common sense could have drawn a diagram of Arjun’s less-than-noble plans long before this. But common sense isnt all that common, after all. So, when it is too late to extricate himself, Raja realises that he is meant to murder Rashmi. If he doesnt, both Rashmi and Amit will be murdered by Arjun anyway, and he will be framed. 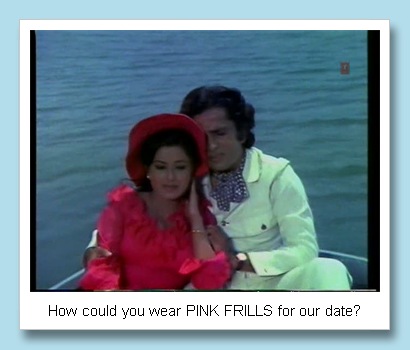 Poonam, in the meantime, has descended into bad-girl-hood with gay abandon. She lives openly with Vikram, drinks and dances with the best of them in Vikram’s club, is bitterly unhappy at her loss of respectability – all in the space of the few short weeks it takes Raja to woo Rashmi. Guess she is a fast girl in more ways than one! 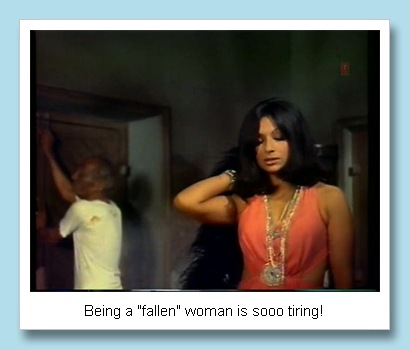 Will Raja be able to rouse his sleeping brain and work his way out of his predicament? Will Rashmi’s fashions get more err… striking? Has Sharmila ever looked more glamorous in the 70s? Can I get to spend quality time with Kabir Bedi in his deliciously wicked club? Well, the movie can answer at least some of these questions… 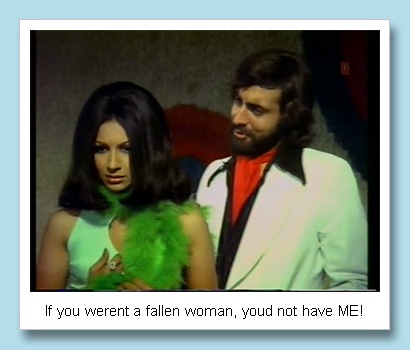 I started out by talking about head-whacking-morality tales. Well this one has the usual moral baggage of 70s masala – dont do anything dishonest, dont fantasise about riches and glamorous lifestyles, dont live with a man before marriage (only applies to good girls), and DO NOT accept a ride on a motor-bike with Kabir Bedi! 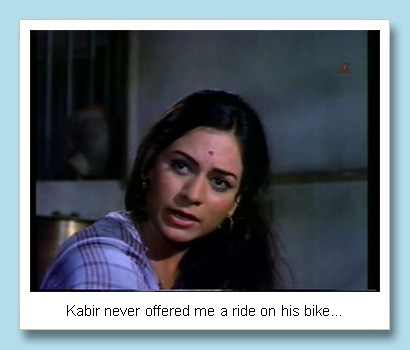 Now that I have recapitulated the plot and all the plot-holes, I am beginning to wonder what it was about the movie that I liked so much, and I did like it a lot! Apart from the beautiful people, there was some cute romance – Raja-Poonam and Raja-Rashmi (unfair – he gets TWO romances!) were both cute – and the movie was pretty fast paced and absorbing. It was also less wacky and over-the-top compared to standard 70s masala-fare, with some interesting plot twists. So overall, I’d say it is a pretty good watch. Just remember to duck when the moral shovel hits, and DO NOT expect the characters to be too intelligent! 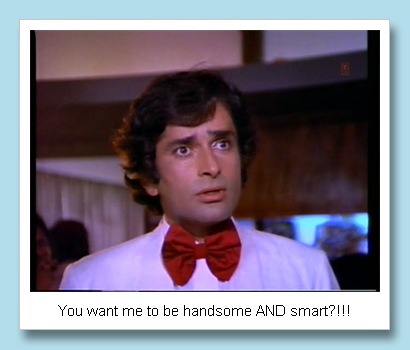