Three friends who are closer than brothers and sing it out, for the world to know. All three in love with the same girl. Doesnt it ring alarm bells? You expect a lot of sacrifice and the poor girl getting the short end of the stick. Well, this is where Neeyat scores. The friends dont sacrifice for each other – at least not in a Damon-and-Pythias way – and friendship, though upheld as a most virtuous state, just barely survives various trials and tribulations. For the rest, its a fun masala-thriller with all the recommended masala ingredients: friendship/bromance, good songs, cute romance, misunderstandings, sacrifices, nasty villains and best of all, some interesting murders and a very fast paced story. 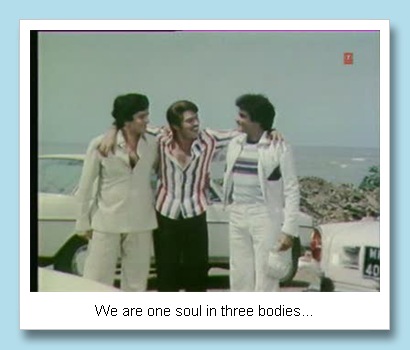 The three friends are Vijay (Shashi Kapoor) the unemployed brother of an intrepid journalist Arvind (Sriram Lagoo), Jeet (Jeetendra) the wastrel son of industrialist Mohanlal (Pinchoo Kapoor), and Ajay (Rakesh Roshan) a hard working police officer who doesnt seem to have any family. Vijay spends his time fruitlessly looking for jobs and rescuing Jeet from the unpleasant consequences of ogling girls. Jeet appreciates Vijay’s trouble-shooting skills so much that when his father insists that he take an active part in the family business, he sends Vijay in his stead! 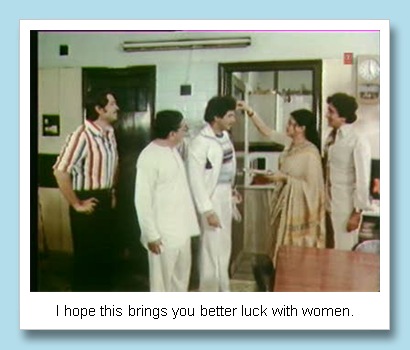 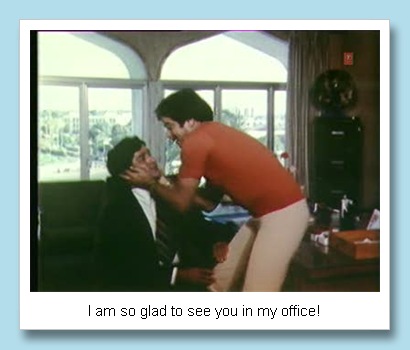 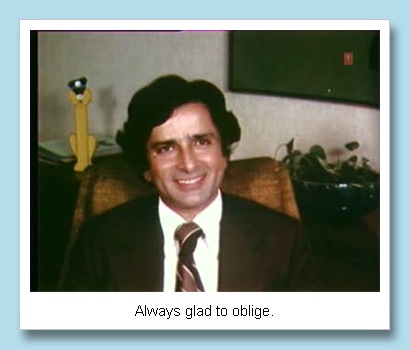 Unbeknownst to Jeet, his father has an underground showroom full of illegal antiques (from temples, of course!) that he sells to – who else – foreigners! Vijay’s constant presence in their business premises is a threat to this underground business and Mohanlal orders his aide-de-camp Ranjeet (Ranjeet) to get rid of him. Ranjeet sends Mona (Bindu) to compromise Vijay so that the latter can be thrown out without making Jeet angry. But Mona recoils in horror (?!!!) from Vijay because he reminds her of her dead husband (as long as she isnt allergic to Shashi) and refuses to have anything to do with him! 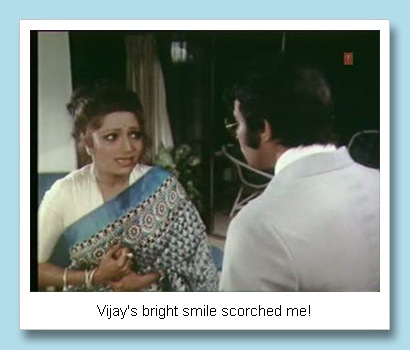 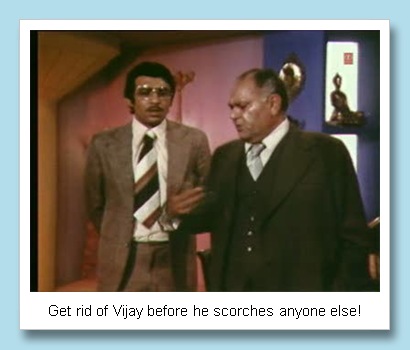 Now comes the love-interest. Each of the friends encounters the beautiful Rekha (Rekha) in different circumstances and most of them fall for her (not Vijay – he is different!). Jeet meets her at a friend’s wedding where after some preliminary skirmishes a visibly un-interested Rekha makes good her escape after giving him a false name – Roopmati. Ajay encounters her on a train journey where he plays Galahad-in-a-wig to her damsel-in-distress. They spend the night together (hey, its all innocent and above-rails) but when he wakes up on the morning after, all he has are his memories and a polite thank you note! 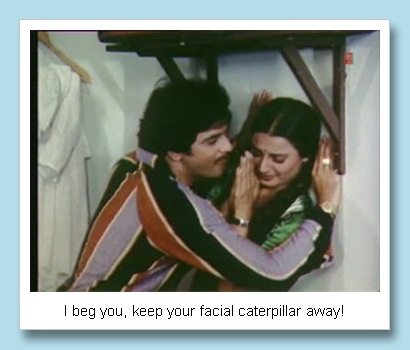 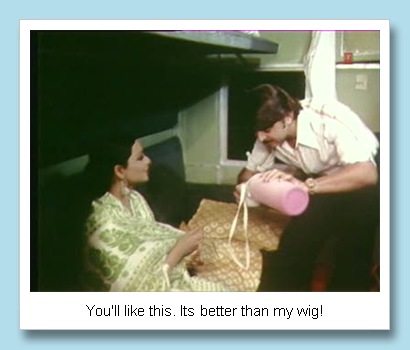 Vijay meets Rekha when he rescues her purse from a pair of thieves late one evening. Unfortunately (for Rekha), he is too busy dishooming the thieves and reading her the riot act about being out alone at night (!!!) to fall for her. But he soon gets ample opportunity to do so when she becomes a coach-tour guide in the hotel that he manages. He doesnt immediately recognise her - rescuing gorgeous-damsels-in-distress is all in a night’s work for Vijay, after all. She on the other hand, was struck by bolts of Shashi-brightness and recognises him instantly. She takes pains to make him aware of her own considerable charms – a project that receives unwitting aid from Ranjeet. In a bid to compromise Vijay, he slips her a mickey and a totally wasted (but very tuneful) Rekha woos Vijay à la Suhaag. (Aside: Since Ranjeet’s so fond of compromises, somebody send him to settle international disputes!) 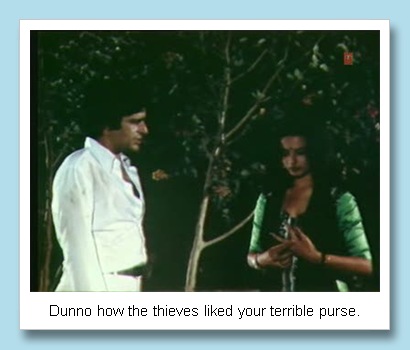 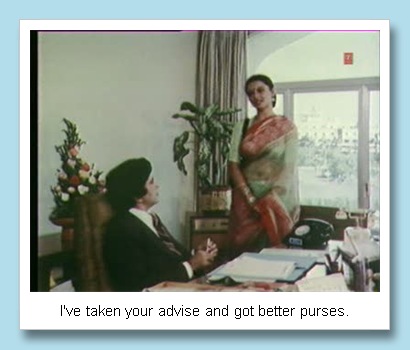 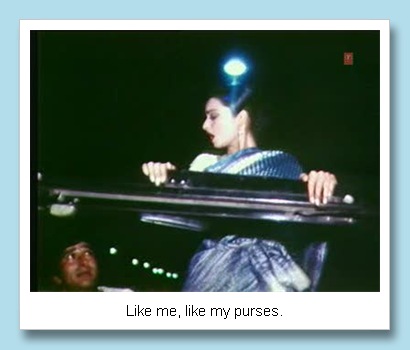 The Vijay-Rekha romance has barely received familial-consent when Jeet finally locates his “Roopmati” after several near-misses. Unaware of Vijay and Rekha’s relationship, he talks to his father about marrying Rekha. Mohanlal agrees, hoping to drive a wedge between Vijay and Jeet using Vijay-Rekha’s relationship. Rekha’s father, Dinanath (A. K. Hangal), is unwilling to sacrifice his daughter’s happiness on the altar of parental obligations (Mohanlal had saved Dinanath from a nasty murder rap) but Rekha agrees to the match. Poor Vijay is devastated but decides to put a good face on it. 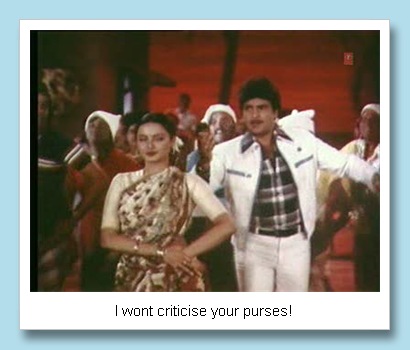 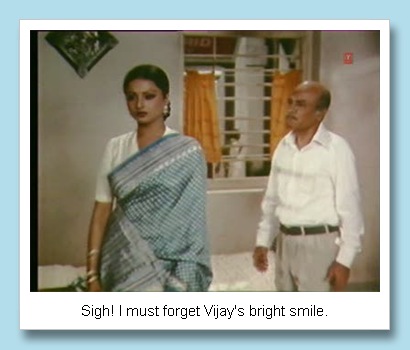 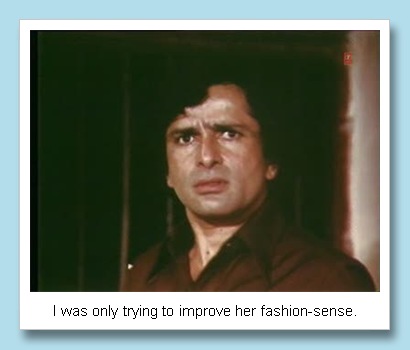 Vijay’s silent angst has just begun when he gets even more cause for angsting. An ex-employee (Manmohan) of Mohanlal’s underground business escapes from prison. In the last breath left after a police bullet, he supplies Arvind with details and proofs of Mohanlal’s illegal activities. Arvind is about to publish an exposé in his paper when he’s killed. His death is initially labeled an accident but the police do their homework (hmm… can masala police get away with so much efficiency?) and identify it as murder. Now, Vijay really has something to angst about! 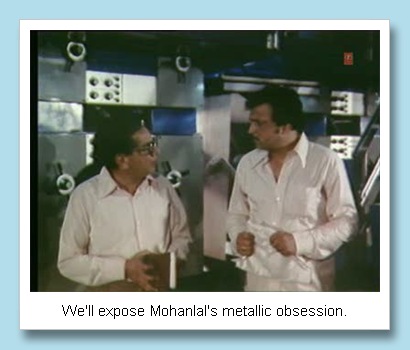 Vijay’s attempts to investigate the murder with the help of Tommy (Deven Varma) – the comic sidekick – get him involved in another murder. And Ranjeet finally succeeds in creating a rift between Jeet and Vijay. (Any other self-respecting villain would have committed harakiri at having to try so often, but our Ranjeet is made of sterner stuff). A thrilling chase now begins. Can Mohanlal escape Vijay’s rightful wrath? Will Vijay-Jeet ever be friends again? Can Jeet stop his hair and moustache changing length at will? Will Ajay change his wig? And who will he grab with his kanoon ke lambe haath? Only time and the movie can tell… 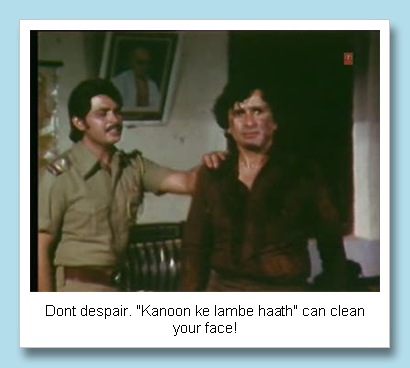 Warning: My T-series VCD had a very, very, very bad print (as is evident from the caps) - the video was fuzzy and apt to disintegrate into large colored-blobs quite often. So, if you’re looking for this movie, I’d suggest a different manufacturer.
Posted by Bollyviewer at March 21, 2009