Shashi-mania is sweeping blogland. Fellow blogizens Beth, Babasko, Shweta and Cindy have caught the bug. How can Old is Gold be far behind in Shashi-pyaar? Inspired by Beth’s Shashi week, I’ve decided on a film festival of sorts featuring films of OiG’s favorite #1! And to kickstart it, I’ve compiled a list of my favorite Shashi Kapoor films. 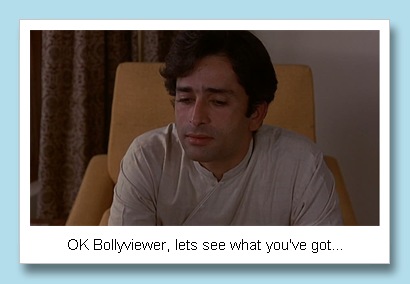 In a career spanning half a century (if we count his child-acting phase) and more than 150 films, he did everything from mainstream-masala to parallel cinema to cross-over films (yes, cross-dressing too, though, thankfully, not often!). Though I love his masala films, I must confess that I prefer his more restrained performances in parallel cinema. Anyhow, masala or parallel, any Shashi is better than no Shashi! So without much ado here are my favorite performances of his, in movies that I liked.

1. Kalyug (1980): Shyam Benegal’s story of two powerful business families locked in a deadly power struggle is widely considered a re-interpretation of the Hindu epic Mahabharata. Shashi Kapoor was superb as the clever, sophisticated businessman Karan whose loyalties to one family and ties to the other lead to much conflict in his life.

2. New Delhi Times (1986): The story of a newspaper editor who uncovers a scandal involving corruption and criminal-politician nexus. Shashi Kapoor was great as the idealistic journalist who uncovers the scandal and has to deal with the unpleasant consequences in his personal life. The performance won him a National Film Award for Best Actor in 1986.

3. Prem Patra (1962): Bimal Roy’s beautiful love story that stars Shashi as a medical student who falls in love and misunderstanding with a fellow medico (Sadhana). The romance is really sweet and Shashi’s performance is remarkably restrained and sincere.

4. Sharmilee (1971) – Shashi plays a clueless army officer of poetic bent who falls for a beautiful sassy young lady (Rakhee) only to be married off to her extremely shy and retiring identical twin (also Rakhee). Shashi and Rakhee look beeeeaaauutiful, there are lovely songs and a bizarre but fun plot that twists and turns every few minutes! (Check out how much Beth and PPCC love it, too!)

5. Neend Hamari Khwaab Tumhare (1966): A cute social comedy in Nawab-land! Shashi plays a young man caught between the ambitions of his social-climbing father and his own honesty against a backdrop of social hypocrisy. There are lovely songs and a cute romance between Shashi and Nanda.

6. Amar Shakti (1978): A masala swashbuckler (or Shash-buckler as Beth calls it) with lost-and-found brothers, evil villains, Robin Hoodian rebels, Shashi+Shatru bromance, lots of fun costumes, sword fights and of course – judicious scenery chewing. Its a fun movie and Shashi is awesome in the sword-fights!

7. Suhaag (1979)– It features Shashitabh – the jodi that defined masala-bromance in the 70s – in Manmohan Desai’s masala classic. Need I say more? Its fun unlimited!

8. Gautam Govinda (1979) – Shashi plays an honest cop in-charge of cleaning up a rural hamlet that is infested with more goons and villains than people! Enjoyable for his unusually kick-ass angry-young-man role and his bromance with lost-and-found brother (Shatrughan Sinha).

9. The Householder (1960) – In Merchant-Ivory’s first full length feature film, Shashi plays a young and rather dumb college lecturer trying to come to terms with an arranged marriage and a new career. Its an interesting film and Shashi’s acting is superb – nobody would suspect his character of either spunk or initiative! ;-)

10. Paap Aur Punya (1974): A fun masala caper set in Rajasthan, it pits one Shashi against the other (yup Shashi gets to play villain and hero, both) and also features my favorite jodi - Shashi+Sharmila!

Honorable mention to three other favorites that didnt make it to the top 10:

Kaala Patthar (1979) – Yash Chopra’s socialist-masala film overflowing with fossil fuel and stars. Shashi plays an upright engineer who stands up for the rights of the miners and helps overthrow the evil coal-mine owner.

Abhinetri (1970) – This isn't one of his best (in spite of the cuddly romance) - he plays a male chauvinist pig who is quite nasty to his wife (Hema Malini). It gets honorable mention because Shashi plays a scientist and looks exactly like the kind of guy I hope to run into - in my lab - one day! 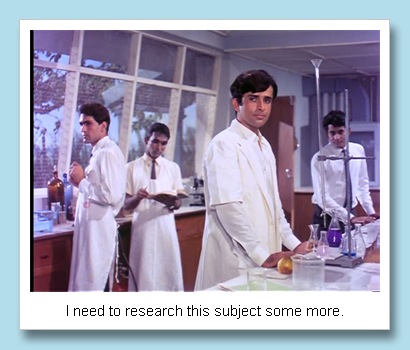 Coming up next: a week-long fest of Shashilicious masala. 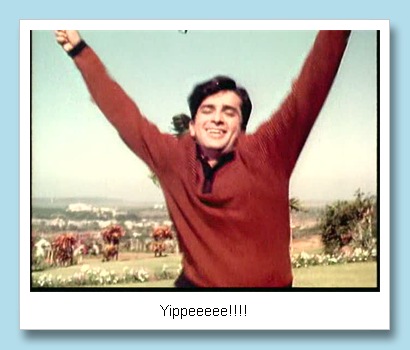 My sincere apologies to non-fans (yes I am aware that such people exist!) – worry not, regular programming will resume next week.
Posted by Bollyviewer at March 18, 2009