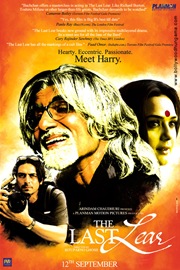 “NOOOOO, it cant be over already!”, was my first reaction when the end credits flashed on the screen. It was such an absorbing watch and so well crafted that I was sucked into the lives onscreen and just didnt want it to end!
The sheer beauty of the film was spellbinding. But once the magic wore off, I was left wondering what exactly the film was all about! Was it about the has-been theatre actor – the titular Last Lear – and his passion for artistic perfection? Was it about the ruthless film maker who would do anything and sacrifice anybody in his quest for artistic reality? Was it the story of three troubled women from vastly different socio-economic strata who all seem to face the same problems and bond over cups of tea at the bedside of an old man? Was it about all of these and their respective places in life? Or was it about that ruthless task-mistress – ART - that leaves no life untouched and affects people who’re not even directly connected with it? I am not sure. And you know what? Frankly my dear, I dont give a damn!


The movie pitches you right in the midst of a story. With no preface or introduction you meet the characters and spend the rest of the movie getting to know them and piecing together their stories from the small windows into their lives that the film opens up. 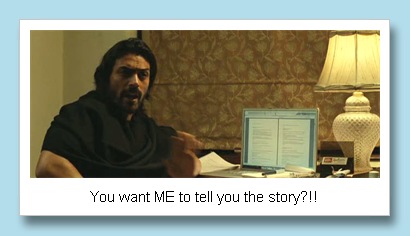 It is Diwali night, the occasion is the premiere of an “off-beat” film by new director Siddharth (Arjun Ramphal). The producer (Shahbaz Khan) welcomes the guests while grumbling to Gautam (Jishu Sengupta) about the non-appearance of the film’s stars. The journalists are clamoring to meet Siddharth who refuses to meet them. All the film’s cast, including the late arrival - star Prasenjit - are concerned over Harish-ji’s illness. 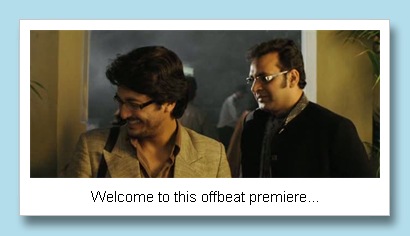 Across the town, the film’s heroine - Shabnam (Preity Zinta) - is being hassled by her boyfriend as she gets ready. She insists that she wont go to the premiere and has to go see a man. The boyfriend - Rajeev (Sudip Mukherjee) - is clearly the jealous type as he wants to know how long she’s been seeing this man, whether he belongs to the unit, etc. When Shabnam refuses to answer, he turns ugly and assaults her with a perfume spray (its lavendar, in case you were wondering)! 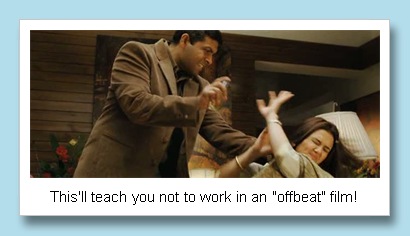 Shabnam beats a hasty retreat. Amidst the chaos of Diwali fireworks, she visits “him” at his home. “He” is very ill and requires a uniformed nurse – Ivy (Divya Dutta) - in attendance. The lady of the house – Vandana (Shefali Shah) – is terribly unwelcoming to Shabnam. 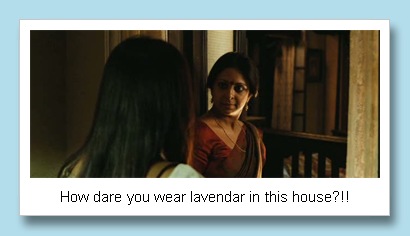 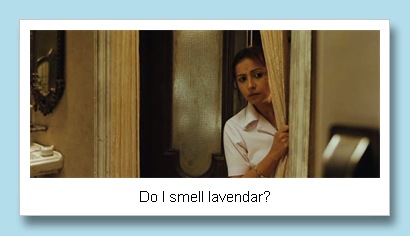 Who is this mysterious “he” or Harish-ji? From people’s conversation and Gautam’s narration, we find out that Harish-ji or “Harry” is Harish Mishra (Amitabh Bachchan) a retired Shakespearean actor. Gautam’s director friend - Siddharth - brought Harry out of retirement to play the role of a circus clown in his film. While shooting for the film Harry met with an accident, and is now comatose. 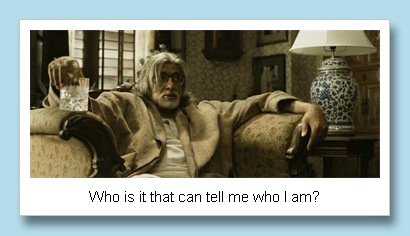 Shabnam perseveres in the the face of Vanadana’s hostility and as the evening progresses, we see that the latter’s bark is worse than her bite. She is in fact like a chocolate lava cake – hard on the outside but pure chocolatey mush on the inside. Shabnam stays with Vandana and Ivy for the evening. Over dinner the three of them talk, and bond over their common problems (MEN, of course!). 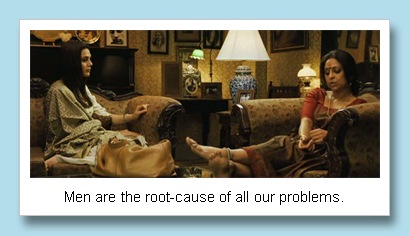 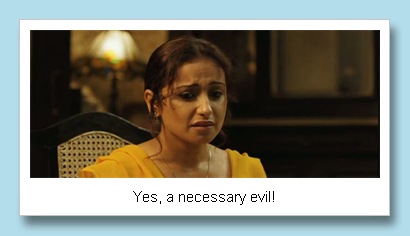 The film takes us back and forth in time through flashbacks, Shabnam and Vandana’s reminisces and Gautam’s narration. Each of them has his/her perspective and from their reminiscences, a picture of Harry begins to emerge. He’s a retired theatre actor with a passion for Shakespeare. He detests technology and yet, is excited by the challenge of acting in front of a camera. For all his passion onstage, his companion Vandana finds him remarkably placid in real life. His co-stars find him eccentric but he grows upon them. He strikes up an unlikely friendship with the film’s star - the model-turned-actress Shabnam – even giving her acting tips. While his zeal for Shakespeare marks him as an eccentric in Gautam’s eyes, Siddharth can understand such single-minded devotion. 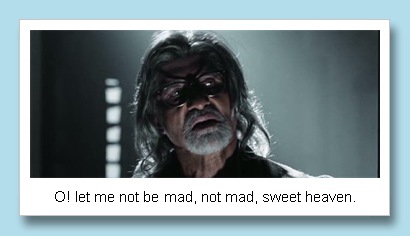 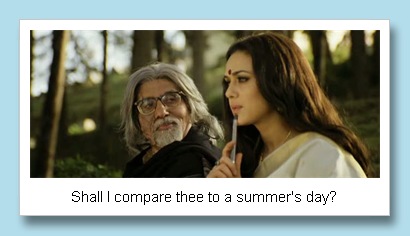 The movie within the movie (a circus clown coming to terms with losing his livelihood to cinema) is clearly a parable for Harry’s predicament and that of his fellow theatre actors who are losing out to films. While Harry personifies tradition, Shabnam stands for the modernity that is willing to learn from the past and take the craft forward. Does their friendship signify peaceful co-existence of the past and the present? Harry himself comes a long way during the shoot. In the beginning he is contemptuous of cinema which he dismisses as “a series of incomplete moments seen through lenses and close-ups”. Soon though, he learns to like film-making and respect the director. 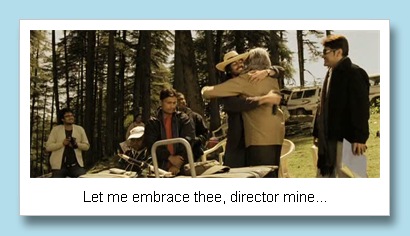 Most of the action takes place within Harry’s flat which is packed with old-fashioned furniture and bric-à-brac, and bathed in warm yellow light. Pitted against Harry’s “old-world'” is “new-world” director Siddharth. He matches Harry in obsessiveness but unlike the latter, is able to see that theatre and films need not be mutually exclusive. He builds the bridge between the two and succeeds in convincing Harry to face the camera. Perhaps the film is trying to show that while the old order yields to the new, the two can still enrich each other. 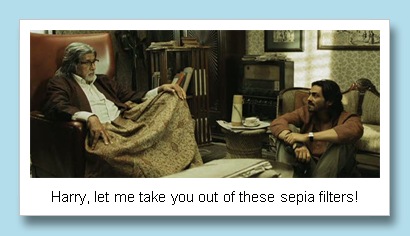 The performances were uniformly good – but then I expected no less from Rituparno Ghosh’s direction. The movie is almost entirely in English with a few Hindi and Bangla dialogues sprinkled here and there. The English dialogues, surprisingly, dont feel stilted or odd and the Hindi and Bangla just adds a nice touch of authenticity. 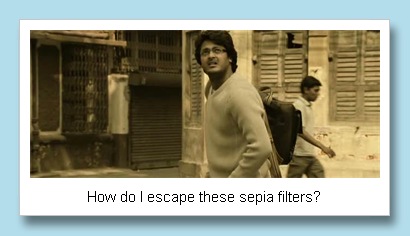 Amitabh Bachchan’s Harry is of course the focal point of the film. Harry comes over as a larger-than-life character who talks and behaves like he takes Shakespeare's adage (all the world’s a stage) literally - he speaks as he might declaim dialogues on the stage! Its only when in a drunken moment he lets his guard down and speaks like a normal person (with a slight Bengali accent, no-less!) that you realise that AB wasnt hamming it up but Harry actually was supposed to be like that. For the rest, I found Big B’s awful toupee rather distracting but loved his performance. 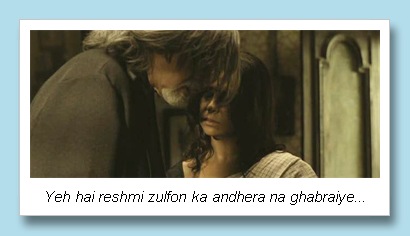 Preity’s troubled Shabnam was beautiful and generous in a too-good-to-be-true way but her subtle acting makes Shabnam a sympathetic character. Shefali Shah was awesome as the fiery Vandana. She used her lovely eyes and expressive face to maximum effect and was by far my favorite in the film. Divya Dutta’s Ivy was a mix of courage and subservience that was beautifully conveyed. Jishu Sengupta’s Gautam mostly takes up the baton of the narrator but is good in the couple of dramatic scenes Gautam has. Arjun Ramphal’s Siddharth comes over as the Machiavellian puppet-master pulling on Harry’s strings - he entices Harry out of retirement and ruthlessly plays with Harry’s emotions to get the best out of him acting-wise. His character underscores the part a good director plays in film-making (films are a director’s medium after all) and Arjun conveys Siddharth’s single-minded zeal for his craft very, very, effectively. 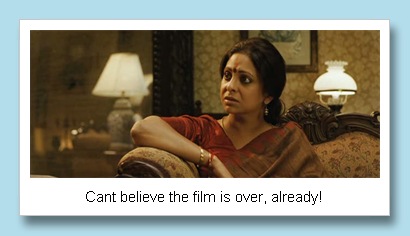 There is tons more I want to say about the film but as this post has already gone beyond long, I’ll wind up with one last thing I just have to mention. Some of my favorite old Hindi songs were used very effectively at different points in the film with their lyrics and/or their original context fitting neatly into the onscreen action. (That may be a very big reason for my liking this film so much!)
Posted by Bollyviewer at March 17, 2009