The Prince and the Pauper reloaded - Paap Aur Punya (1974)

I knew somewhere out there, there was a movie where Sharmila Tagore stepped out of her hot-house-delicate filmi persona and did a spunky role. And I FOUND IT! *Big smile* She plays a fiesty Rajasthani maiden who kicks some serious ass – she rescues her hero by singing and dancing, gets into sword fights and even horsewhips the villain. A Big Nahiiiin!!! for the last! Why, you ask? The big bad villain is my beloved Shashi Kapoor, thats why!

The immortal Twain classic – The Prince and the Pauper – has been given a true-blue 70s Bollywood treatment, complete with lost-and-found, good brother-evil brother and loads of hamming (chiefly by OiG’s favorite #1, Shashi)! The title makes the moral of the story clear – *Paap Aur Punya* (Sin and Virtue) – the eternal fight between good and evil. In true epic fashion, the good and evil are personified by look-alike brothers (Shashi in yet another double role. Yay!). I did decide to observe and comment on religious symbolism, the themes running through the movie, etc. In short I was determined not to be side-tracked by my favorite pair’s famous beauty and try to take a more scholarly view. Alas, I was too easily distracted by the masala goodness of the movie. 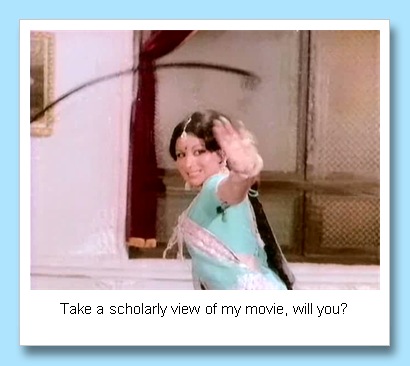 The king – Raja Gajraj Singh (Murad)- of a small principality in British India has been overthrown in a coup and imprisoned by his beloved younger brother Balbir Singh (Ajit). The reason for the coup – Gajraj’s queen (Achla Sachdev) is about to give birth and Balbir cannot risk the birth of an heir who’ll dispossess him. 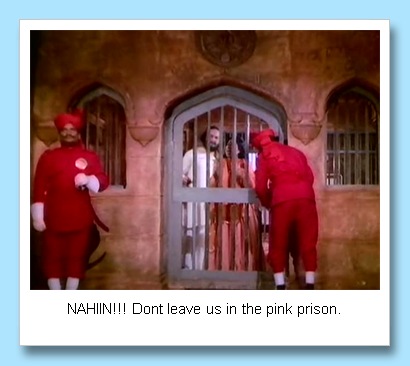 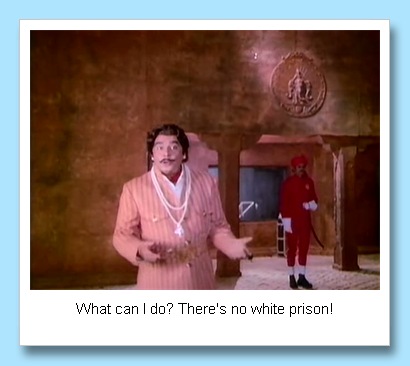 The Rani gives birth to twins in captivity, and with the help of the kindly Sister Margaret (Indrani Mukherjee), effects a switcheroo – i.e., escape with one twin and substitute the other for Balbir’s own newborn babe. After quoting Lord Krishna from Bhagvad Gita in support of his villainy (“one mustn't let family feelings get in the way of achieving the desired end”), Balbir pays for this heresy by unwittingly killing his own son and bringing up his nephew as his own! The years roll by and the twins grow up on opposite ends of the socio-economic spectrum. 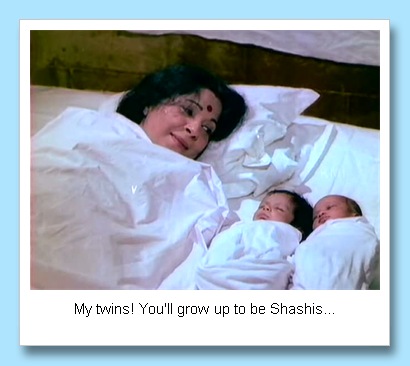 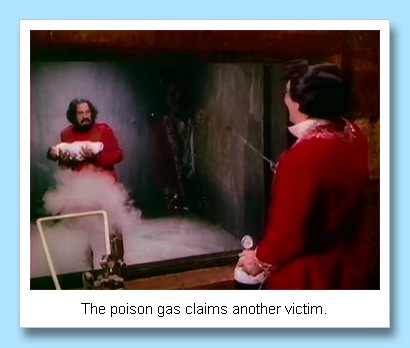 The rich twin – Ganga Singh (Shashi Kapoor) – becomes an ideal son under the tutelage of Mother Margaret. He is kind to the poor, always well-behaved, has no vices and is very obedient to his father’s wishes – much to his father’s secret chagrin. He’d prefer a more Ranjeet-like son! 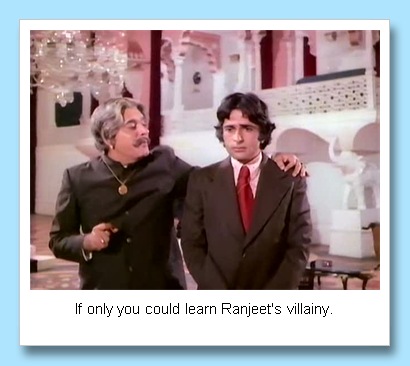 Ganga the pure, falls for the equally pure but way more spunky camel-seller Jugni (Sharmila Tagore). On the advise of his ADC Arjun Singh (Asrani), he woos her in the guise of a fellow tribal and then reveals his true identity. Jugni is unimpressed by his royalty, and makes him wear a gold tooth to be sure of his veracity! 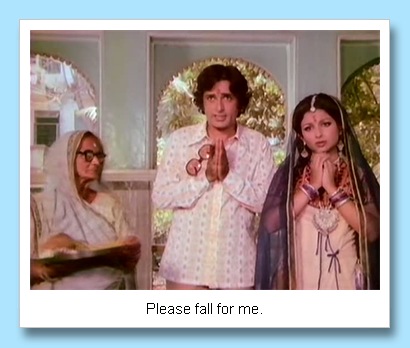 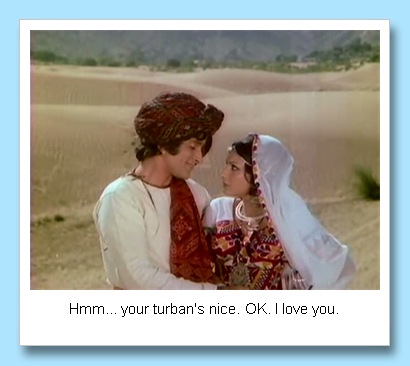 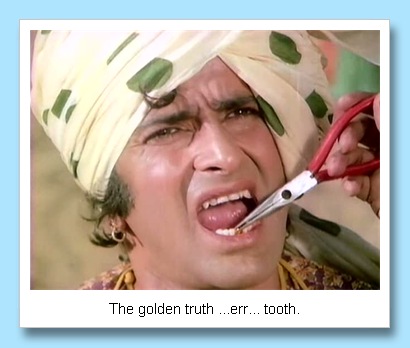 The poor twin – Jwala Singh (also Shashi Kapoor, in full hamming mode) – turns out to be evil, inspite of having the all important Ma. He snarls and bares his teeth all the time, is constantly in and out of jail and consorts with an arch villain - Tiger (Pinchoo Kapoor). If that isnt enough to convince you of his villainy, there’s more. He walks with a limp (Fagin, Long John Silver anyone?) – what can be more evil than that? 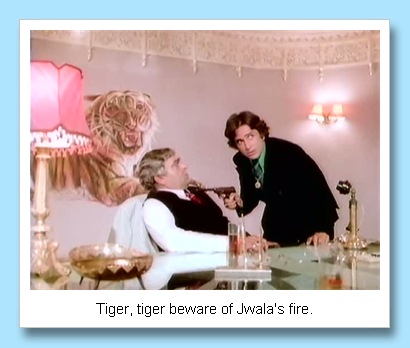 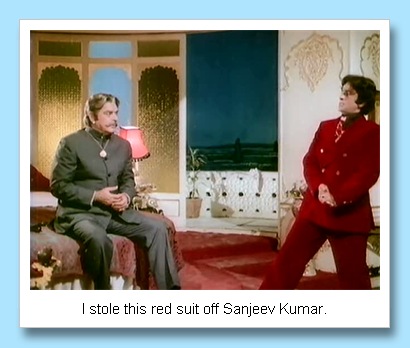 Dont believe Jwala? Here’s photographic evidence.
Ganga returns home from wooing Jugni to find that his father has betrothed him to Mala (Aruna Irani). She is a rich industrialist’s daughter and her wealth will save the family’s declining fortunes in the aftermath of Indian independence. Mala wears fantastic go-go boots, rides a horse like a pro, and loves him, but Ganga wants his Jugni. Like the imprisoned Rapunzel, he lets down his hair – actually a bed-sheet rope – and prepares to escape. But guess who climbs up the rope – his evil twin, Jwala. 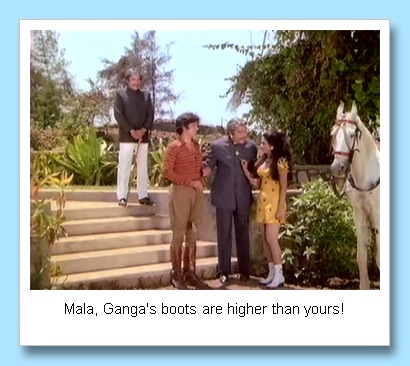 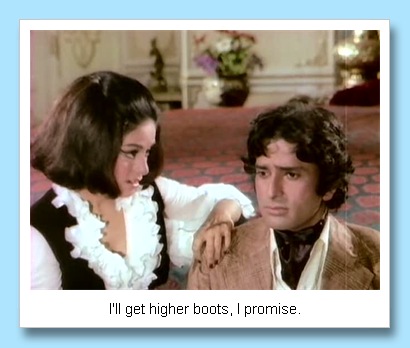 Ganga doesnt recognise evil when he sees it, and embraces Jwala joyfully. The two switch places (and gold teeth), so Ganga can go meet his Jugni, while Jwala is to pretend to be Ganga and get engaged to Mala. Alas for poor Ganga, Jwala has wicked deeds planned. He has Ganga arrested for his own (Jwala’s) crimes. 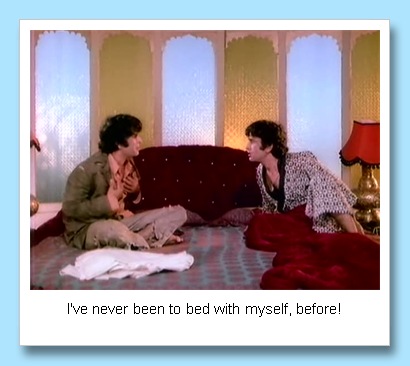 From here on, the movie gets on a masala rollercoaster. Ganga escapes from the police only to land in Tiger’s fabulous prison. Jugni discovers Jwala’s perfidy and horse whips him (trust me, he deserves it for his criminal hamming!). Then, she manages to find Ganga’s whereabouts and sings and dances her way into the prison to rescue him! Things move apace according to the statutes and guidelines laid down in the rulebook of 70s masala - Ma makes an appearance, Balbir finds out about his son(s) who isnt his son, the twins realise their twinliness, there are sword fights, grab-the-diamond contests, and of course, tons of good ol’ drama – all in the ever beautiful Rajasthan. 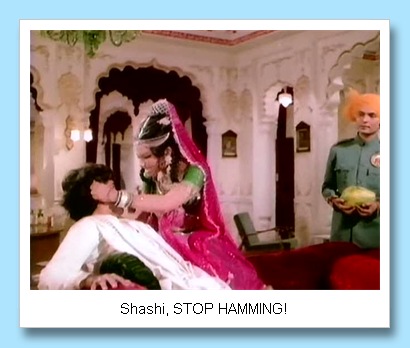 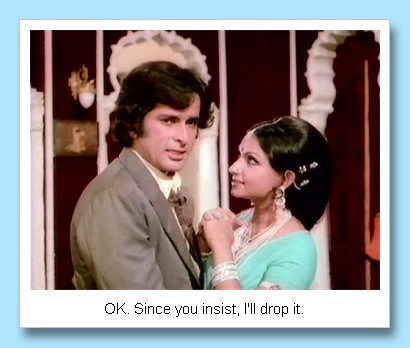 The movie had a few unusual features in the context of 70s masala: Has there been another villain who quotes the Gita in support of his villainy?!! The son brought up by the loving mother turns criminal, while the son educated by a Catholic nun of ambiguous morals (she assists Balbir inspite of his fratricidal tendencies) turns out to be the good guy! Whats even more curious, “Ma” doesnt seem to have a very central role to play in her sons’ lives. I am not sure what this all adds up to, but I guess the writer-director of the film – Prayag Raj – was lucky the Hindutvavadis (proponents of Hindutva) didnt see this film! I was also surprised that the rich twin was the good one, since most of 70s masala tends to extol the ennobling properties of poverty. 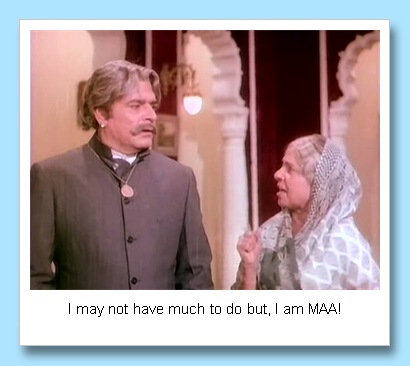 Apart from the scripture-quoting villain, and the hero visiting a temple to woo his beloved, there is very little religion/religious symbolism in the film. As it also goes against several established tenets of 70s masala, it should perhaps be classified as agnostic/iconoclastic masala (What says the ruler of Masala Pradesh?). No matter how its classified though, the movie is full of pretty (visuals and people) and brimming over with masala goodness. So, go take a look! 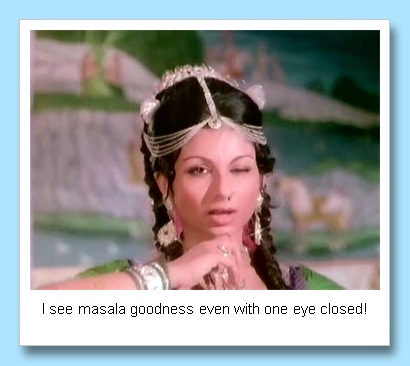