Emerging trends in interrogation techniques: an overview of Bollywood-related methods.

While walking along the University’s pristine corridors yesterday, I had the good fortune to run into Prof. Lakshmi Jawaab-Talab and her grad student Gopi Jasoos. I know her from my grad school days in India. Once she’d ascertained my marital status, enquired closely into my career plans, finances, etc., she told me what brought her to Calgary. “The Canadian Govt was very impressed by my review article on the use of bad movies to interrogate tough suspects. Canada’s neighbours churn out bad movies and suspects in such large quantities that its become a matter of grave concern even so far up North. So here I am, about to give a series of lecture-demonstrations to Canadian law enforcement agencies!” 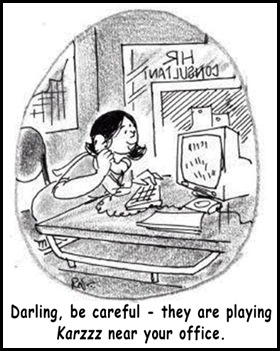 I was reminded of my ideas on Beth’s post, but was surprised that anyone was actually researching the subject. “Its been an active field of research for close on two decades, now. DRDO scientists pioneered the technique and crores of rupees have been spent on research in the last few years alone. I entered the field 5 years ago after coming across an 80s Hindi movie on TV. Since then, I’ve proved the efficacy of the technique by interrogating several dreaded criminals using bad Bollywood films.” Prof Jawaab-Talab enlightened me. She continued to expound on her favorite theory for the next few hours while I listened spellbound.
Here are the salient points of her research for your reading pleasure. If after going through this post you have any questions about the technique, do let me know. Prof. Jawaab-Talab and Mr. Jasoos are planning to be in Canada until early spring and will be happy to answer your questions.
Step1: Softening-up the suspect
In a filmi variation of the good cop/bad cop routine, the interrogator starts out with a good romance/thriller/tear-jerker/comedy which has great songs and popular stars. This will serve to disarm the suspect who will then begin to trust his interrogator.
The interrogator’s own good taste dictates the choice of movies for this stage, but you cant go wrong with masala classics like Sholay, Suhaag, comedies like Hera Pheri, Chupke Chupke, romances like Parineeta, Hum Tum, tear-jerkers like Kal Ho Na Ho, Anand, etc.
Step2: Preliminary torture
The first step could be quite prolonged (and enjoyable) for both parties. Once you’ve ascertained the suspect’s taste in movies you turn on the bad cop, i.e., bring on a terrible movie in his favorite genre and preferably starring his favorite stars.
For a Romance-lover: You bring on a romantic movie that is either so anti-romantic that the suspect screams in pain or a movie that kills romance in painfully slow degrees and works like Chinese water torture.
“Yash Chopra”, states Prof. Jawab-Talab, “has made some excellent movies just for this purpose.” Prime examples are Kabhi Kabhi, Silsila, Chandni, and Dil To Pagal Hai - all of which have the added bonus of starring Bollywood’s (and presumably, the suspect’s) most beloved stars.
For Mystery-buffs and lovers of action-thrillers/horrors: You need a movie that exemplifies the saying Khoda pahaad nikli chuhiyaa (Dug up a whole mountain and found only a mouse!) or even better, a Bolly-horror flick. Thankfully for interrogators, Bollywood has a rich variety of such movies.
Any horror flick like Krishna Cottage and Purana Mandir-2, any of the Bond-inspired thrillers like Gambler, Farz, CID 909 or other run-of-the-mill thrillers like Teesra Kaun, Tarkeib, Gupt, etc., would serve.
For a comedy enthusiast: A Govinda movie, directed by David Dhawan and preferably co-starring Kader Khan will do the trick anytime.
“But Prof. J-T,” I objected, “there are several people who love those movies!”
“If your suspect is one of those, even the worst of films wont make him confess and you’ll need non-filmi options.” retorted Prof. J-T.
For a feminist: Such criminals are very rare but in case you come across one, you have a wide choice in movies from 1960s to the 1980s. Most of them have female oppression as a blatant backdrop and when it comes to well made movies that take it to new heights, you can't go wrong with Jab Jab Phool Khile.
“But Prof. J-T, that has beautiful Shashi and lovely songs!” I wailed.
“The contrast between the beautifully made film and the utterly regressive end can reduce most feminists to tears of pain.” explained Prof. J-T.
Step3: Crank up the torture
Once your suspect is in pain and needs relief, the trick is to crank up the torture to unbearable levels. This can be done quite easily by making him watch a movie from mid 1980s to early 1990s. Mithun Chakraborty, and several ageing 70s stars specialised in horr(or)ible action/romance flicks during this period. Any of their movies from this era (helpful pointers on my previous post and research on imdb can help) would do the trick.
Most suspects would crack at this point and confess all. If your suspect still does not rush to spill the beans, you need to go to step 4.
Step4: Bring on the rack and the thumbscrews
If you’ve reached this far, your suspect is either innocent or a very tough nut to crack. In either case, you can settle the matter very easily. “Mother India” pontificates Prof. J-T, “never fails. Every suspect who’s watched it has broken down and confessed all his misdeeds!” According to her, there were several sacrificing-mother stories in the 50s and 60s but nothing can compare to Nargis’s powerful performance that reduces grown men to tears and turns hardened criminals into chunks of molten wax. 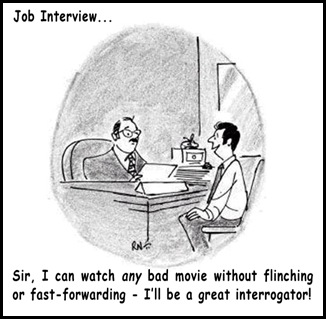 I hope this short recap of Prof. J-T’s long lecture helps bring home to all movie-buffs the multiple uses of cinema. The next time you fast forward a boring scene or walk out on a bad movie, remember that such luxuries are not granted to everyone.
Note: Prof. J-T being an avid Bolly-viewer, the list here is limited to Hindi movies but readers’ suggestions about movies from other languages and countries are very welcome.
Disclaimer: The cartoons were all picked off the world wide web. The two B/W cartoons are the work of famous Indian cartoonist R. K. Laxman but the captions are mine. Clicking on the pictures will take you to the cartoons with the original captions.