I discovered this unknown (to me) movie by Subodh Mukherji Productions (the production house that gave us Junglee, Sharmeelee and Abhinetri) on Rajshri's movie (and TV-series) portal. An unknown movie starring *gasp* Shashi Kapoor and Zeenat Amaan at their beautiful best - what a treat! The story has a pinch of Roman Holiday, lots of diamonds and generous doses of Bollywood masala but the result is a rather bland mish-mash. It appears that though diamonds are a girl's best friend, Zeenat hates them and they do nothing for Shashi or any of his assorted friends, either!
Shekhar (Shashi Kapoor) is a poor orphan who through hard work and misogynism (yes, he really hates women and tunefully explains why in Haseeno ke chakkar mein at 9:00 min into the movie!!!) has overcome the handicap of poverty to make himself an unsuccessful car mechanic. OK OK he has not overcome the handicap of poverty but you wouldnt think so if you saw his wardrobe and how perfectly his hair have been curled! His companion in poverty is his trusty lieutenant Birju (Jr Mehmood) who loves women as much as his boss hates them. 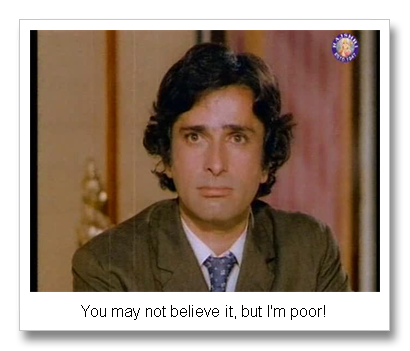 The colors of Bollywood

Ever wondered who Govinda's style-icon is? Who does Govinda consider his Guru in matters sartorial? 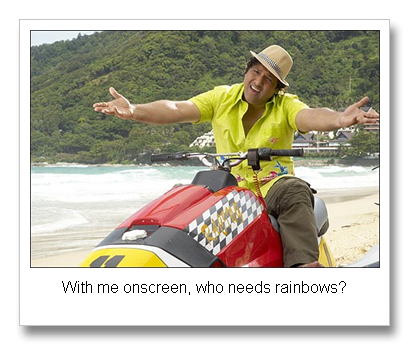 I just stumbled across a rare Talat Mahmood song on youtube and just have to talk about it! Its a song originally sung by Mohammed Rafi for the film Bhabhi (1955). According to lovehumanity who posted it, this was recorded by HMV as part of their VERSION RECORDINGS series in the 50s where they had famous singers sing popular songs of other singers.
Read more »
Posted by Bollyviewer at August 19, 2008 18 comments:

It seems to be the season of "Top 10" in blogland. Both FilmiGirl and the Post-Punk Cinema Club have put up their selection of top 10 songs for various decades. Never having done a top 10 of anything before, I promptly and shamelessly decided to copy the idea. However, to weed out Top 10 songs from literally hundreds of songs every decade is a Herculean task and a beginner like me needs something much simpler. After much cogitation I settled on Top 10 Comedies simply because great comedies in Bollywood appear but rarely and it shouldnt be hard to select 10. Having committed myself to the task, I realised that Bollywood has way too many great comedies to make this any easier than top 10 songs!
What you see here is the result of sheer hard work and days of frantic weeding and ruthless trimming - I've even managed to limit myself to only two comedies each from directors Basu Chatterji and Hrishikesh Mukherji who between them were responsible for most of the great comedies in the 70s and 80s!
If jest be the food of life, read on... and dont forget to tell me about your favorite comedies.
10. Andaz Apna Apna (1994) - Yaallah!!

Two bumbling young men meet up on the path of get-rich-quick by attempting to marry the same rich girl. Alternately collaborating and competing with each other for their heiress, they run into bizarre villains, confusing look-alikes and every possible situation that a hero of a successful 70s masala block-buster could look forward to. From these trials they emerge triumphant, with their love-lives and fortunes made. What makes it especially amusing is its use of cliches to create a hilarious parody of masala movies. Salman Khan and Aamir Khan as the aspiring fortune-hunters are uproariously funny and ably supported by their heroines - Raveena Tandon and Karishma Kapoor - their villains - Shakti Kapoor, Shehzad Khan and Viju Khote - and the goody-baddy lookalikes played by Paresh Rawal. Raj Kumar Santoshi's tongue-in-cheek nod to 70s Bollywood still has me in splits everytime I watch it, though I havent watched it as often as Veracious seems to have!
Read more »
Posted by Bollyviewer at August 17, 2008 64 comments:

I sometimes wonder how we bloggers would survive without youtube. Take me, for example. I had a hectic week and then a super hectic weekend watching James Garner, Doris Day, Fred MacMurray, et al, over at TCM, leaving me with no time to write up a review! So, I decided to go fishing in the youtube seas for some interesting videos to talk about and guess what I found - a 1973 documentary on Bollywood's beloved twinkletoes Helen. The film was directed and narrated by Anthony Korner for Merchant-Ivory Productions and can also be found in the DVD extra features of Bombay Talkies. The documentary tells us a little something about Helen from her difficult beginnings to her climb as Bollywood's most graceful and prolific dancer. And here it is for your viewing pleasure.
Read more »
Posted by Bollyviewer at August 13, 2008 16 comments:

What happens when you lend your invaluable statuette to a Paris museum and want it back in a hurry? Why, you enlist the help of a society cat-burglar and steal it from the museum! Elementary dear Watson. But which society burglar? Its 1966 and Cary Grant has retired (well, almost) and Stewart Granger is too busy making spaghetti Westerns in Germany. Fear not. In the British Isles the sun never sets on debonair thieves. Lets get Peter O'Toole. He isnt British (he is Irish) but can disguise himself as an Arab and even has something that Grant did not - intensely blue eyes and a true-blue British accent (Grant's accent is classified as Mid-Atlantic)! 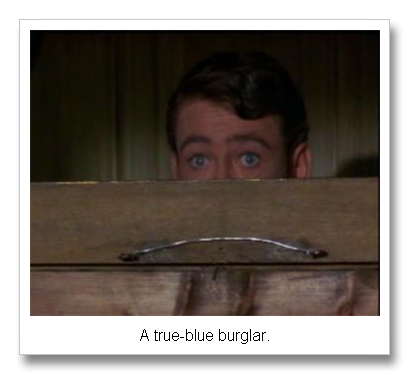 In a career spanning several decades, these Bollywood icons rarely ever shared screen-space. In fact, this is the only instance that I know of where Ashok Kumar and Raj Kapoor appeared in the same movie. Its also the only movie where Raj Kapoor played a negative character and came close to murdering the heroine! What movie is it? 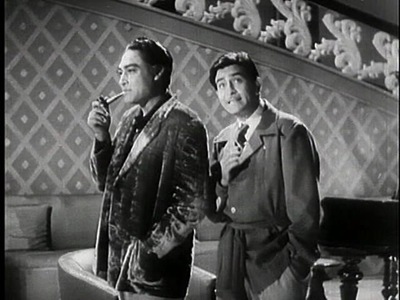