Beth's poll on the path to awful movies reminded me of some of the bad movies I have seen because of who’s starred in it. There are several of those - most of them starring Shashi Kapoor! This one is by no means the worst of them (Atithee takes the prize for that), but it comes close!
Here's the plot dynamics. Inspector Shekhar (Iftekhar) is an honest and upright officer of the Indian police force. Shekhar will sacrifice anything to catch the dreaded dacoit Vikram Singh (Kader Khan). Vikram has but one weakness – his young daughter - while Shekhar has neither daughter nor weakness. He does have a wife and two sons, though. 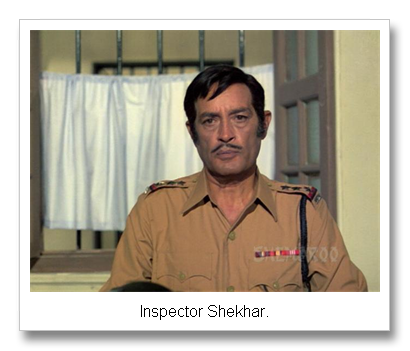 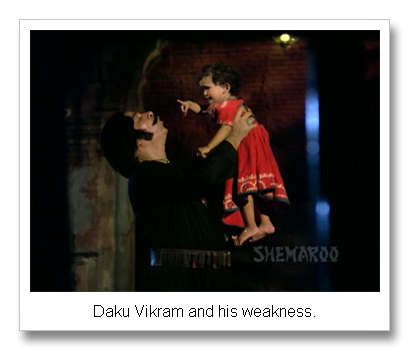 As was customary in the 70s, there is a violent exchange of children between the two opponents. Shekhar’s younger son Suraj is carried off by the dacoits and presumed dead by the police while the dacoit’s daughter is carried off by Ganga, the inspector’s older son. Shekhar brings up Vikram's daughter as his own while Vikram makes Suraj his own. 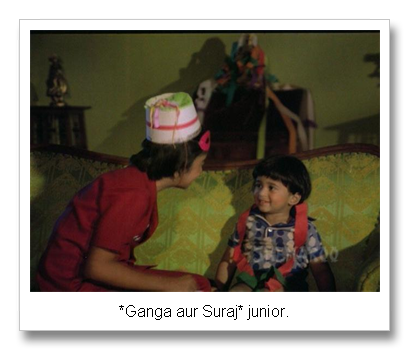 Now that the families are evenly mixed up, the kids grow – Ganga into an ageing Inspector (Sunil Dutt), Vikram's daughter into the saucy Sarita (Sulakshana Pandit) and Suraj into dacoit Vijay Singh(Shashi Kapoor). Wait, this doesn’t sound right. Somebody in the casting department has blundered and handed Sunil Dutt Shashi’s role while Shashi is stuck with Sunil’s signature role and moustache! You console yourself that it can hardly get worse and decide to wait and watch. 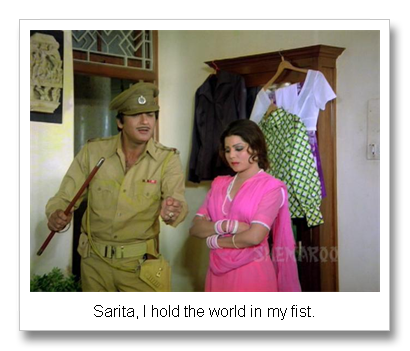 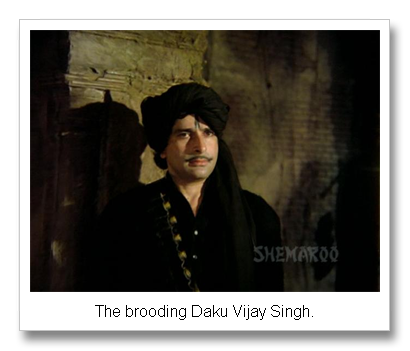 Vijay swaggers around on horse-back with a big gun and terrorizes poor villagers. But thats only his day job. In the evenings he relaxes in weddings and sings romantic songs to Sarita. Inspite of his 'stache and expanding middle, Sarita falls for him - its Shashi after all, who could resist? Enter Inspector Ganga who is posted to Dacoit Vikram's domain and is determined to exterminate the dacoits. Along with Ganga come his aged parents and foster sister Sarita. The stage is now set for the *found* part of the lost-and-found formula with all the dramatis personae assembled in one place. 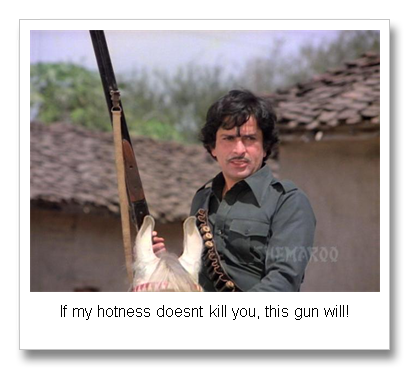 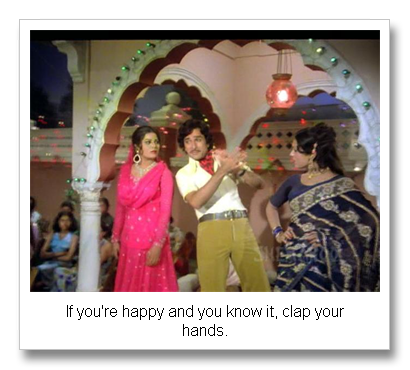 Inspector Ganga is getting nowhere fast in his attempts to capture Dacoit Vikram and his gang. So, he sticks on an extremely unstable beard, a curly-haired wig and transforms himself into Dacoit Sangram Singh. Long before The Departed there were undercover agents and our hero no.1, Ganga, is one of them. He successfully infiltrates the gang and strikes up a close friendship with Vijay. The suspense mounts. You wonder if Ganga's beard will fall first or Vikram's gang. 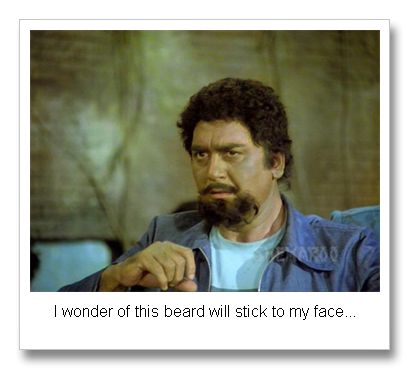 I forgot to mention Ganga's love interest. Ganga assumes the guise of a village idiot to reconnoiter the dacoit's land and wins the love of a charming boat[wo]man played by Reena Roy. 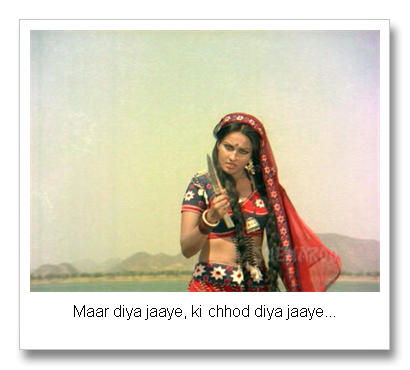 The film winds its predictable way to its happy ending through routine dramatics and tiresome theatrics.

Some noteworthy features are:
1. The romance is melt-into-a-puddle sweet. 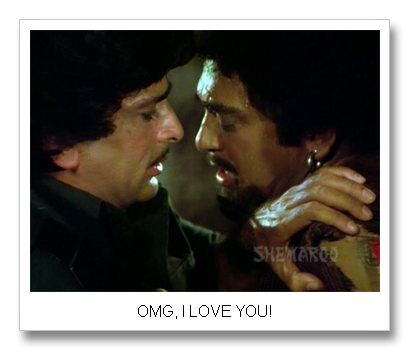 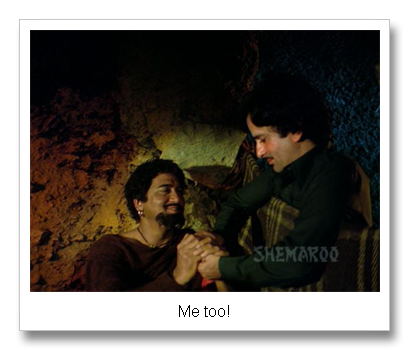 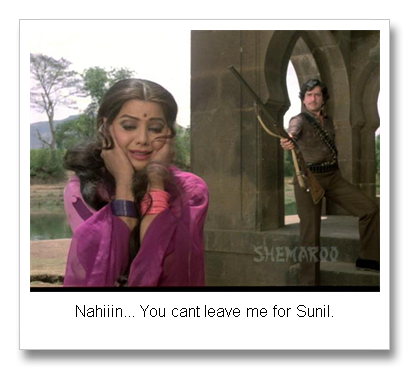 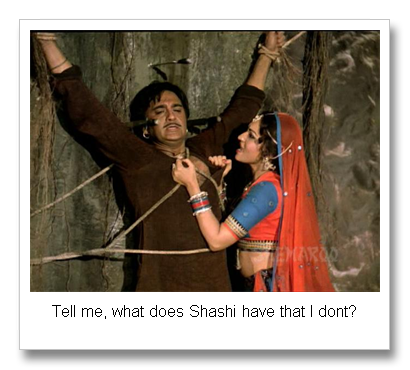 2. Sunil Dutt is Master of Disguises: 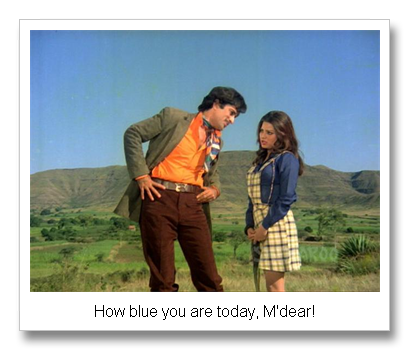 4. Aruna Irani waits in vain for the fun to begin. 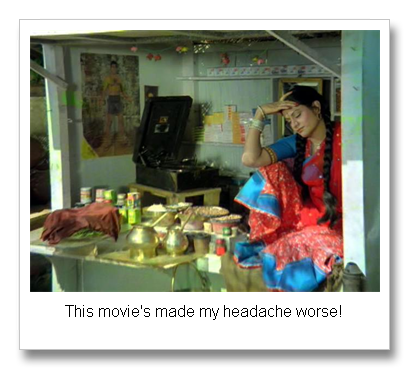 Warning: Do not watch when you have a headache. If you must watch it, do so in small doses and do not forget to bring plenty of patience and good humor along for viewing - they will be required.