A while ago I was reading this article on Gulshan Nanda - a Hindi writer whose frothy romances were very popular in the 1960's and 70's, and who was responsible for several successfull Hindi movies (Saawan Ki Ghata, Patthar Ke Sanam, Kati Patang, Sharmelee, Jheel Ke Us Paar, Jugnu, etc.). The author of the article claims, among other things, that
a) "good" Hindi literature never made it to Hindi cinema,
b) the task of bringing Hindi literature to movies is beyond the scope of Bollywood directors.
This got me thinking - did serious Hindi literature never make it to Bollywood? Right off the bat I can recall several examples of Indian literary classics that did make it to Bollywood, though were not very popular. Here are the ones I've seen and liked. They're from Hindi literature as well as literature from other Indian languages. Though not large in number, they do refute the author's claims that Bollywood is incapable of making movies based on Indian literature. If any of you know of some other examples, I would love to hear about it. 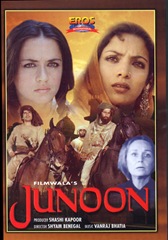 This Shyam Benegal classic about the crazy infatuation of a Pathan (Shashi Kapoor) for his young Anglo-Indian captive (Nafisa Ali) amidst the chaos of the Sepoy mutiny of 1857, was based on the short story "A Flight of Pigeons" by Ruskin Bond. Bond is a well known Indian writer (of British descent) who writes in English and most of his stories are based in the Himalayan regions of Uttarakhand. 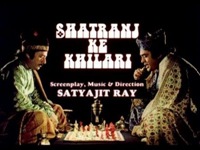 Legendary director Satyajit Ray's only foray into Hindi cinema is a sumptuous historical drama set in the turbulent last days (1856) of the reign of Nawab Wajed Ali Shah of Avadh (or Oudh as it is known in the Raj literature). The movie is based on a story by renowned Hindi writer Munshi Premchand, and stars Amjad Khan, Sanjeev Kumar, Saeed Jaffrey and Sir Richard Attenborough. Premchand's writing was characterised by his realistic depiction of mostly rural protagonists and the use of vernacular Hindi as opposed to the more Sanskritised version preferred by other writers.
3. Pinjar (2003) 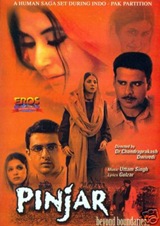 This Urmila Matondkar - Manoj Bajpai starrer is the story of a woman's travails in pre-independence India and the impact of Partition on her small family. The movie is based on acclaimed Punjabi writer Amrita Pritam's novel of the same name. Pritam wrote primarily about women and their trials and travails vis-à-vis Indian society. A much decorated author (she was awarded the highest literary awards in India), Pinjar is not her first novel to make it to the big screen. According to wikipedia, another of her novels - Daaku was made into a film by Basu Chatterjee in 1975. 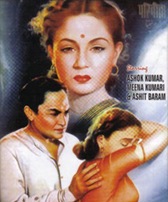 This Sharat Chandra Chatterji novella of romance between a spoilt, rich, young man and his lovable, orphaned neighbour has been the subject of several films in both Bengali and Hindi. Bimal Roy's 1953 Hindi version had Ashok Kumar and Meena Kumari in the lead, and Vidhu Vinod Chopra's 2005 version had Saif Ali Khan and Vidya Balan as the lovers. There was also a 70's movie starring Jeetendra and Sulakshana Pandit which had a similar storyline, though I cant recall the name. 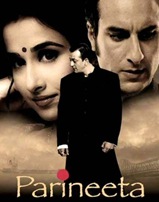 A very popular Bengali writer, Sharat Chandra's writings usually involved beautiful, strong women protagonists who more often than not, loved proud, weak men. Several of his books made it to Hindi cinema of which Devdas is probably the most famous and was remade four times (1928, 1935, 1955 and 2002).
Look out in my upcoming posts for reviews of these movies and dont forget to let me know of any forgotten adaptation of Indian literature in Bollywood.
Posted by Bollyviewer at June 13, 2008