A romance? An action movie? A 70's style masala blockbuster? A comedy? An out-and-out entertainer? Well, Pocketmaar tries to be all of these and fails miserably on each count! I have just spent a good portion of my precious weekend watching this movie and if I am acerbic in my criticism of this film, I hope you will take into account my wasted Saturday afternoon.
The plot: Shankar (Dharmendra) is a small-time pick-pocket and his partner in crime is the myopic Sundar (Mehmood). Together the two happily live off the pockets of Bombay commuters when Shankar happens to rescue the blind Ganga (Azra) from goons intent on raping her. He takes her home and cares for her and her new-born baby. Lest you doubt the poor woman's virtue, she did get married and then deserted by her husband. OK, now that we have all been assured of Ganga's purity, lets move on. 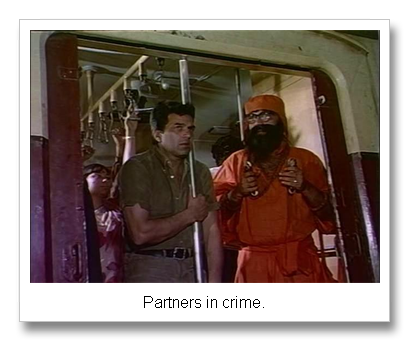 Ganga and the baby's birth increases Shankar's expenses and he needs to find richer people to rob. So, Shankar and Sundar step into Hell (relax - its only an upmarket restaurant) in their borrowed finery and find their respective love interests. Shankar finds the rich heiress Asha (Saira Banu) and Sundar finds Sheela (Shubha Khote). 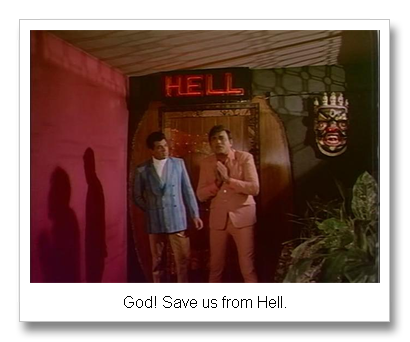 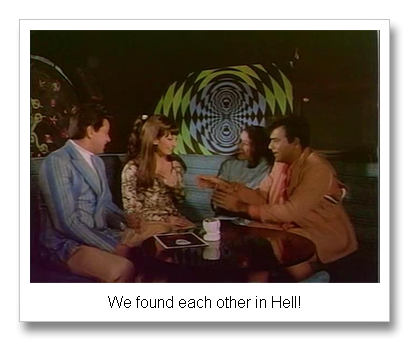 Shankar sets about wooing Asha by first stealing her necklace and then returning it to her, while Sundar's girl friend doesn't seem to require any wooing at all! Beautiful, rich, modern Asha is unimpressed by Shankar. How do we know that she is modern? She wears dresses, goes dancing and calls her grandfather "Grandpa". Fate steps in to help Shankar. Asha's boyfriend Madan (Prem Chopra) has disappeared just when her grandfather (Nazir Hussain) decides that she should either produce her boyfriend or marry the man of his choice. Madan, unknown to Asha, has been sentenced to jail for smuggling but manages to send her letters convincing her that he is really in England. 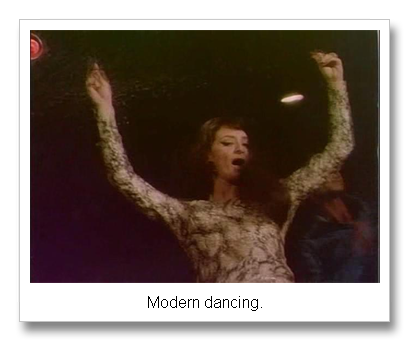 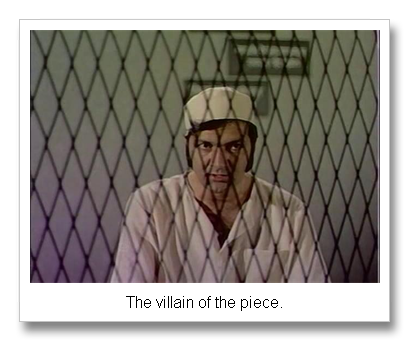 Asha is desperate to avoid marrying her grandfather's choice and engages Shankar to pose as Madan. Shankar throws himself into the part and appears at the airport in the uniform of all "foreign-returned" people - coat and hat. He promptly touches Grandpa's feet and removes his hat to get Grandpa's blessing (the hat has an anti-blessing coating that deflects blessings away from his person). A young man who lived in England for six months and still touches his elders' feet! Grandpa is sold on Shankar and announces his engagement to Asha at a party that evening. 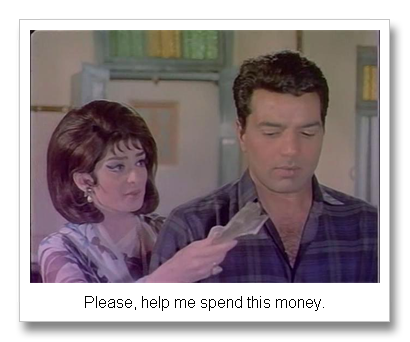 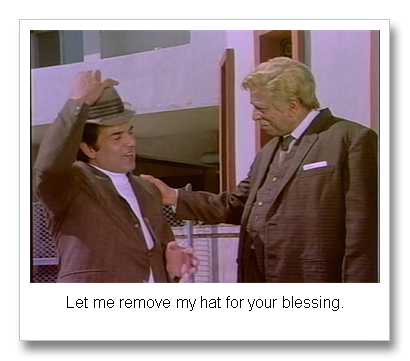 Asha being one of your modern misses, doesnt care to be rushed into commitment quite so fast. She angrily dismisses Shankar as her fiance and extracts the expensive engagement ring from his little finger. Little finger? Yes, well, when men get engaged in India they always wear their engagement rings on their little fingers! You didnt know that? Neither did I! But, I am digressing. 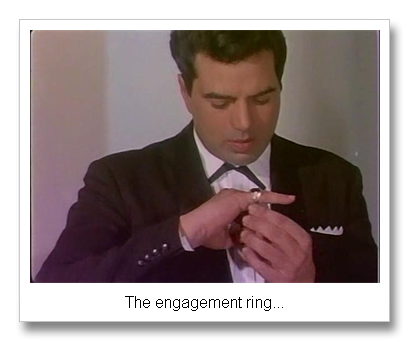 Back to the story - Asha returns home to find her grandpa has had a heart attack and it is important for her fiance to be there when Grandpa wakes up in the morning. Poor Asha! She re-engages Shankar to play fiance no.1. Shankar now has her completely in his power and proceeds to exert it in unpleasant ways. He sings terrible songs to her by the poolside - it saddens me to say that of a Mohd. Rafi song, but it was terrible - makes her remove his shoes, gets her drunk and convinces her that while drunk she spent the night with him. Thats when you find Asha is at heart, a true Bhartiya Naari (Indian woman). She cant bear the thought of having spent the night with Shankar and is only saved from killing herself by her maid who tells her that Shankar spent the night on the couch outside her bedroom. I was puzzled by the attempted suicide. Shankar was awfully annoying but still the super good-looking Dharmendra - so what was her problem? Maybe Asha couldnt bear the thought of not remembering their night of passion and wanted to kill herself because of that? 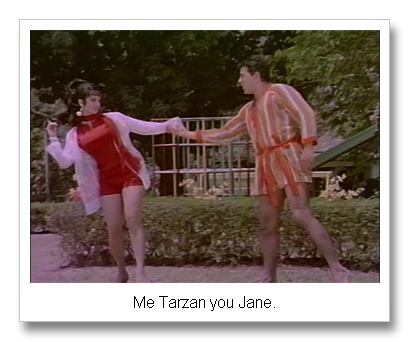 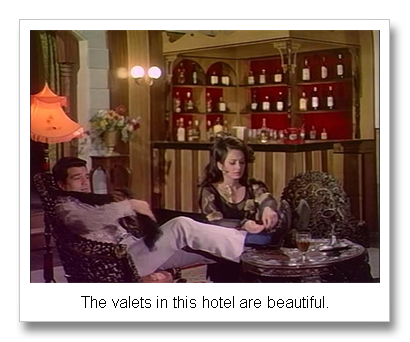 Their night of passion, or lack of it, brings about a complete change in Asha's feelings for Shankar. Here's a guy who could have raped her while she was too drunk to resist, and he DID NOT do it! She is now totally in love with him. Sounds like 70's men had only to desist from rape to get their gals!! What little interest I had in the movie totally evaporated at this point and I forwarded just to check how it all ended. Asha's unlamented ex - Madan - came out of jail and there were emotional scenes, songs and fighting before the two most beautiful words in English language flashed on the screen - The End. 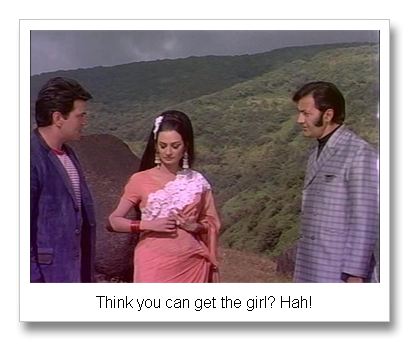 The principle actors seemed to be going through the motions of acting. Dharmendra looked his beautiful 60's self but didnt appear to be much involved in his character. Saira was her screechy self with an overload of mascara that I itched to clean up. Mehmood's comedy was tiring and stale. The songs were all totally forgettable. Fashion-wise, the movie appeared to be more late 60's than early 70's but in everything else it seemed to belong to an earlier century. Correction, the early part of the movie was more like 70's masala but it rapidly degenerated into a 60's romance of the worst kind. It is in fact, a movie that you can easily afford to skip. 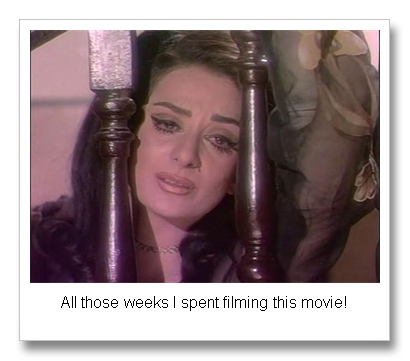