This is a film that I see once every few years. In between watches, I do remember that it’s a great film and I love it, but on re-watch, I’m always surprised at how good it actually is! It has so much goodness going on (Dev+Waheeda = yummy!) that I tend to forget some of it’s not-to-be-missed scenes – like the premiere of Mother India and how relevant it is to the plot. 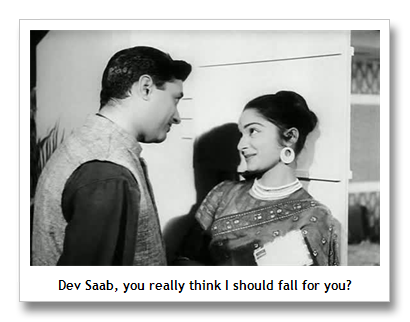 Raghu/Raghuvir (Dev Anand) is a poor bus conductor with an ailing mother (Leela Chitnis – who else?!) and two siblings (Nanda and unknown child actor). When he loses his job, hunger and destitution stare him in the face. In his desperate search for a means to earn money, he passes by a cinema theatre where he encounters Kalu (Rashid Khan) selling movie tickets in black. This sparks off an idea. He will buy movie tickets in advance from the theatre and sell them to the public at a much higher price just before the show! 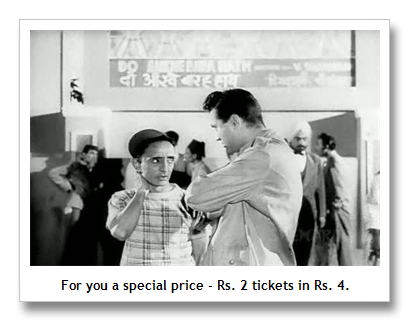 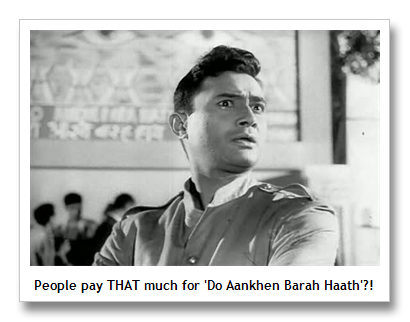 He finances his new venture by robbing a stranger (Chetan Anand) of Rs. 5000. With the capital secured, Raghu goes around recruiting people for his new enterprise. He soon has Kalu, Jaggu (Jagdish Raj) and several others on team Raghu. They buy up a lot of tickets of Mother India’s premiere show at Liberty. There follows a lovely integration of fact and fiction – as the stars start arriving at the theatre (yes we see a lot of them!) the demand for Raghu’s tickets goes on increasing. By the time Nargis arrives (with her brother Anwar Hussain), he is auctioning his tickets to the highest bidder! In one stroke, he’s converted his five grand to twenty grand. After this, there is no looking back for Raghu. He takes over the black marketing of cinema tickets for every theatre in Bombay. His only serious competitor is Ganesh (Madan Puri) whom he cleverly outwits and then strong-arms into becoming his associate. 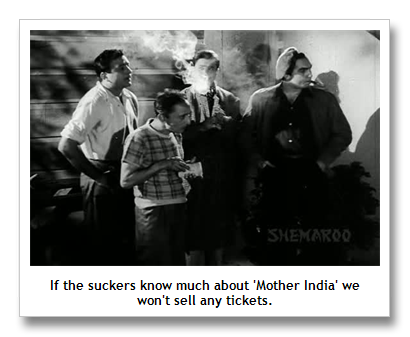 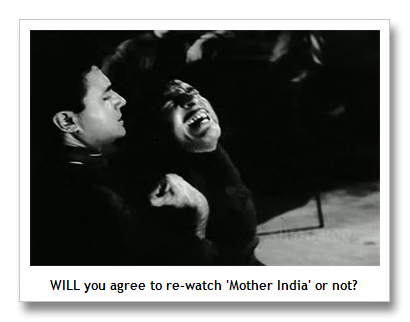 From a poor, unemployed man, Raghu is now a rich entrepreneur. And he might have gone on raking in the cash had it not been for one chance encounter. He sees the dazzlingly beautiful Alka (Waheeda Rehman) tearing up cinema tickets that her boyfriend Nand (Vijay Anand) had bought in black. Naturally this makes a deep impact on Raghu. When she reads Nand a strong lecture against dealing with black marketeers, we can perceive that the dent she made in Raghu’s heart has become a permanent crater. Raghu seems to think so too, because he follows her home to find out who she is. He soon shifts to a flat close to her home and makes it his business to eavesdrop on Alka and Nand whenever possible. 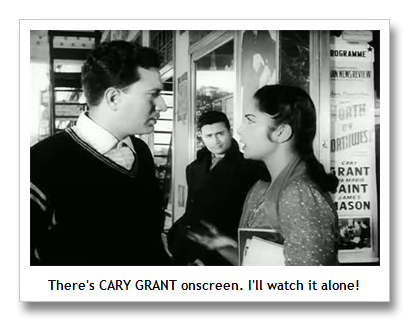 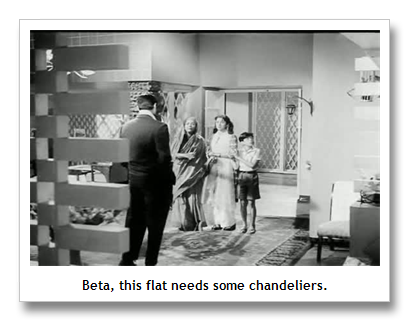 From his eavesdropping/stalking activities, Raghu gathers a lot of useful information. He finds that Alka and Nand are college classmates, and love each other in an easy, affectionate way. They love talking about books (my kind of people!) and their book chats prompt Raghu to begin reading as well. After months of following them around (how do they not notice the bepuffed stalker?), Raghu finally sees a ray of hope for his own chances with Alka. Nand is going abroad for a couple of years and the young lovers have sensibly decided to let the separation be a test of their attachment. Raghu is convinced that Nand will not return to India, and starts planning to woo Alka. 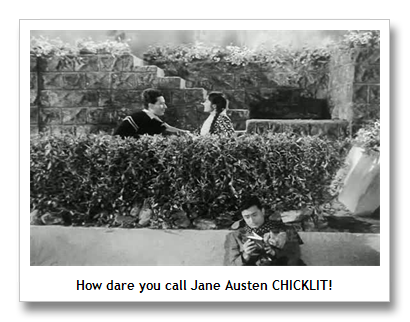 After Nand’s departure, Alka’s parents take her to Ooty to cheer her up. Raghu follows them, managing to snag a berth in their train compartment. Operation woo Alka is soon underway. After surreptitiously serenading her with Apni to har aah ek toofan hai, he gets in solid with her Pa (who is this actor?) by curing the latter’s backache. Having secured a friendly foothold with her family, Raghu begins to shower attention on Alka. She is affronted at first. Then, as she grows to know and like him, she is amused and flattered. Yet she is steadfast in her vows to Nand and resists the temptation to succumb to Raghu (and she is sorely tempted). With great resolve, she tells him that she loves another, and that he must go away. 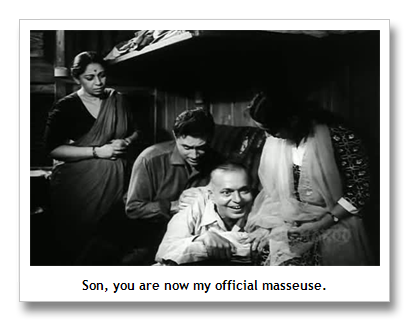 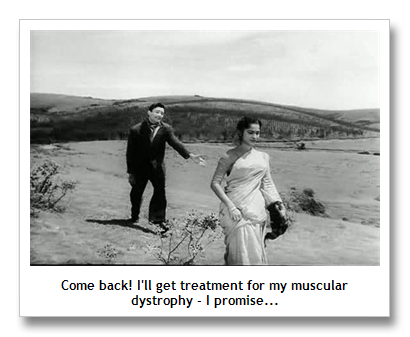 A sad Raghu returns home to find that his ailing mother is now very close to death. Fearing that he is being punished for his sinful profession, he decides to reform. His first task is to return the Rs. 5000 he stole from the stranger (Chetan Anand) all those years ago. Then, he persuades his gang members to give honest labour a try.  After one day of back-breaking work for meagre returns, most of them vote to resume black marketing. But with determination and perseverance, nothing is impossible - and Raghu is determined to reform himself and all his associates. He mixes in some martyrdom with a little bit of Gandhi-giri and soon has most of his misguided associates firmly on the straight and narrow. Together they open their Safed Bazaar (White Market) – the world’s first filmi fair-trade marketplace. 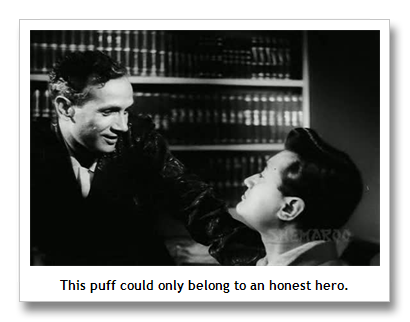 With his black marketing days behind him, Raghu is a changed man. He trades in his fancy suits for simple kurta-pyjamas, his conscience is clear, his Maa’s health is improving, but he still hankers after Alka. And then, on a rainy day in Bombay, he runs into her. After two long years, suddenly Raghu has cause for happiness! He can see his Alka often, and realises that she is more in love with him than with her absent boy friend. But she still insists on waiting for her Nand. Just when he convinces her to break it off with the vilaayati boyfriend, the latter turns up to ruin all his well-laid plans. And that isn’t all. Raghu must still pay for his crimes. Lest you worry about poor Raghu, let me assure you that he lives a long, happy and honest life – nobody with such a monsoon-resistant puff can be defeated by anything as trivial as life’s trials and tribulations. And naturally, fortune favours those who favour their puffs. 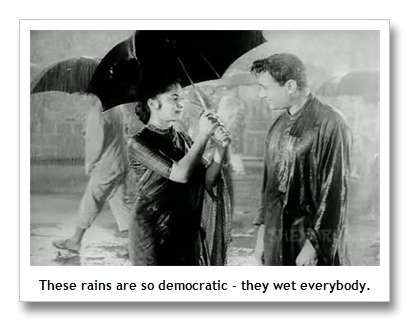 The most remarkable thing about the film (apart from it’s great plot and lovely songs) is the heroine. She says things like like “I am not a Sati-Savitri that I’ll keep on forgiving” and she isn’t punished for being an evil, Westernised woman! What’s more, she is allowed to fall for two men, and decide between them. *gasp* and double *gasp*! And that isn’t all – the only time our hero is in deadly peril, she gets to rescue him!!! If I did not already love this film to bits, this alone would make me fall for it. But the film has a lot more going for it than just that. Raghu’s rags-to-riches and riches-to-rags story is depicted intelligently and with a lot of empathy. He himself is a very well-drawn character – intelligent, compassionate and one who never fails to learn any of life’s lessons. And Dev Anand plays it with great charm and a light touch that makes him such a delight to watch in his better days. The only time director Vijay Anand lets Dev Saab get out of hand is with his "physical emoting" in the songs – but we will not talk about it. What is a muscular degenerative disease or two when you can admire him the rest of the time? 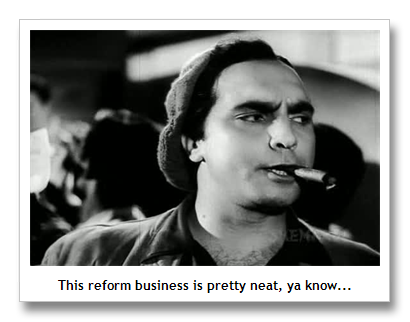 For all it’s goodness, I must admit that the last 15 minutes of the film could have been much better done. Vijay Anand’s writing makes it’s point subtly, for the most part, but in the climax it trades in that subtlety for a battering ram. And the melodrama is not even particularly well-done. While the brothers Anand shine in lighter moments, none of them seems to be able to carry off melodrama. Chetan Anand makes a valiant effort to imbue lawyer Desai’s last plea for clemency with passionate feeling, but sounds more like an actor reluctantly mouthing poor dialogues! And in the final scenes, Dev Anand looks like he is in full dress rehearsal for Guide! But if there ever was a film that can be easily forgiven for a badly done climax, this is it. I won’t be waiting for another few years before I re-watch it – Waheeda Rehman and Dev Anand will call me to it a lot sooner, I’m sure!

PS: This is the only time I’ve ever seen Geeta Dutt on screen! 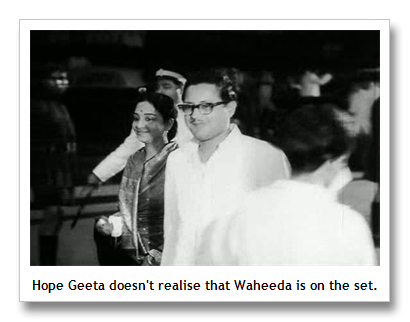