I’ve always maintained that if you wish to see the maximum number of deranged characters in one film, you need to look up Wuthering Heights. But after watching this film, I can assert positively that you don’t need to go so far back in time, or so far from the Indian shores either, to find your fill of dangerously unstable people! I’d seen this film long ago and my dim distant memories warned me that it isn’t a film I liked a lot. But it’s hard to resist the combined appeal of Dada Mani, Madhubala and the lovely music. So I re-watched - with mixed results. 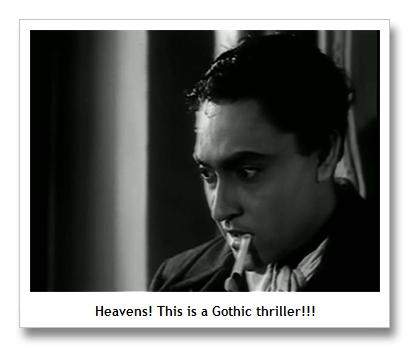 The story begins on a dark and stormy night in Allahabad, in a mansion that looks like it ought to be haunted. Our hero – Hari Shankar (Ashok Kumar) - walks in from the rain, to inspect his newly purchased mansion. The mansion’s caretaker, Mali (Kumar), greets him with the story of a haunting love drama played out here, 40 years ago. The riverside mansion was built for the lovely Kamini whose lover crossed the river to come meet her every night. One night, he was caught in a storm on the river and drowned. But before he perished, he managed to shout to Kamini that he would be back for her in another lifetime. Kamini herself drowned in the river, not long after. 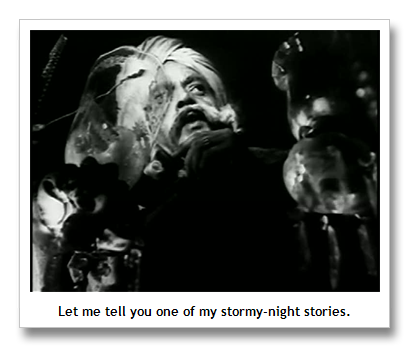 Shankar explores his new domain and discovers a portrait of the previous owner. He is amazed to see that the tragic lover is the spitting image of himself, with a beard and moustache attached! Unlike most Bollywood heroes, Shankar is well versed in masala traditions, and immediately deduces that he must be a reincarnation of the dead man. Right on cue, he hears a female voice singing a haunting melody. He follows the sound to find that the singer is a young beauty (Madhubala) who appears and disappears mysteriously, and sings of her lover’s eventual arrival. A quick reality check via contact with the burning end of his cigarette convinces him that he is not dreaming. His friend Shrinath (Kanu Roy) arrives soon after this and finds him in a disturbed state. He tries to persuade Shankar that the ghostly atmosphere of the mansion has affected him – he is NOT the reincarnation of the male half of the mansion’s tragic lovers and he has NOT found the spirit of the female half. 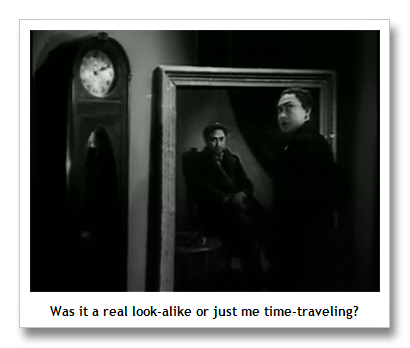 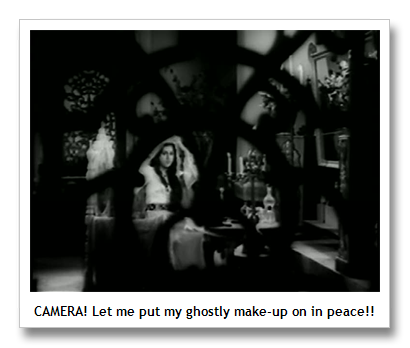 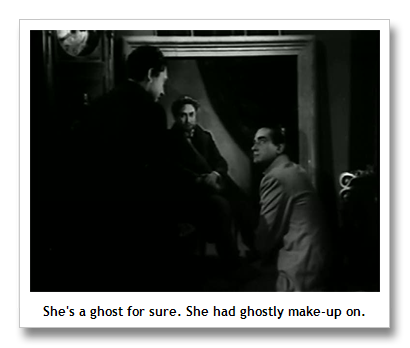 Shrinath’s sensible arguments die an untimely death when the ghostly Kamini (Madhubala) turns up and proves beyond doubt that she is a real, live spirit (if spirits can be said to live). So now Shrinath takes a different tack – Shankar must remember that his life belongs to his betrothed. He convinces Shankar to return home to Kanpur, while he disposes of the poisonous mansion. Shankar starts for Kanpur, but as the train pulls up at Naini, he realises that he should get off it. (I wonder if it’s because he realises that Naini is South East of Allahabad and he needs to go North West to get to Kanpur?) Next thing we know, he is back in the haunted mansion with Kamini-spirit. 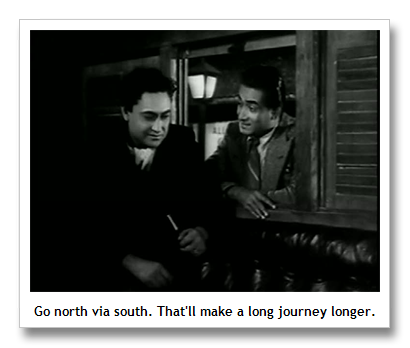 The ever vigilant Shrinath rescues him before he can compromise himself with a ghost, but the respite is only temporary. Perceiving that talk of slow poison of the ghostly variety cuts no ice with the now-obsessed Shankar, he decides to give his friend the cure-by-tawaiyaf treatment. Sadly for him, while the cure proved effective in several cases of filmi insanity, it does not so much as dent Shankar’s obsession. He leaves a perfectly good mujra to go home to Kamini’s spirit. And Kamini isn’t slow to respond to his overtures. She tells him that they can be together in this lifetime, if he will only get her the body of a female he might like. When he indignantly refutes any suggestion of liking any female but her, she suggests that he check out caretaker Mali’s daughter, Asha. If he likes her looks, he must kill her so that Kamini-spirit can enter the body and the two lovers can be united. 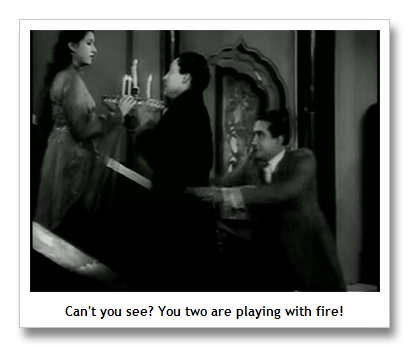 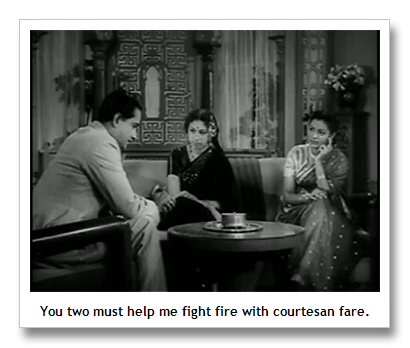 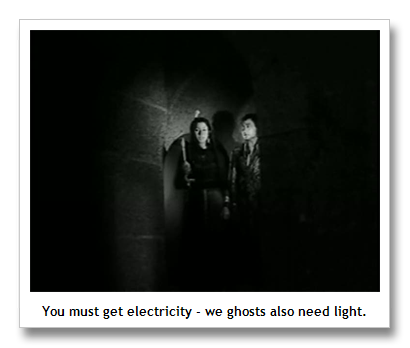 Just when Shankar is all set to kill Asha, Shrinath comes in with the big guns, and that is the end of our hero’s romantic struggle. Shankar is soon married to his fiancée Ranjana (Vijaylakshmi). Defeated he may be, but Shankar is by no means reconciled to his wedded fate. He is unable to get close to his new bride – Kamini is still so much in his thoughts that he can’t even bring himself to unveil his bride and see her face! The incensed Ranjana decides that she will leave her veil on until he lifts it. And so life goes on. Shankar tries in vain to forget Kamini-spirit who sings sad songs of lost love, and poor Ranjana despairs of ever finding out what ails her husband or ever being at the receiving end of his attentions. 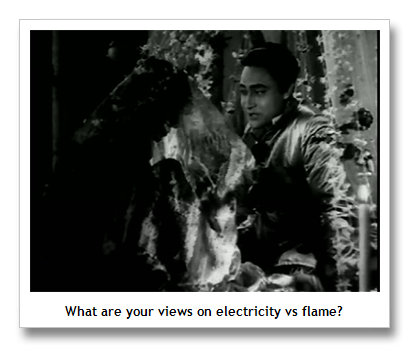 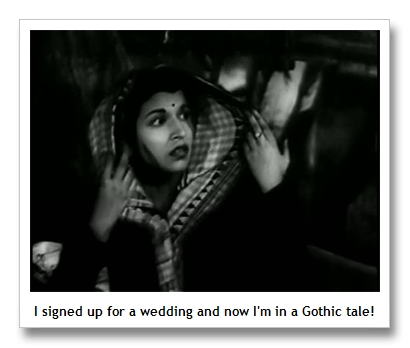 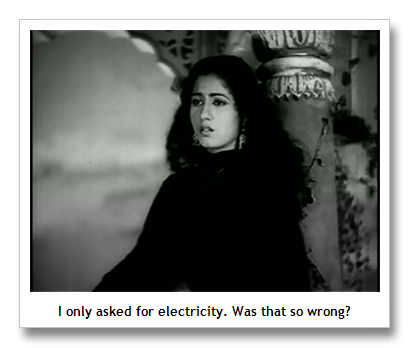 I will say no more because I don’t want to spoil the story for those of you who haven’t seen the film yet. As the story unfolds, you realise that things are a whole lot more complicated than you expected, with unusual twists and turns. It’s a very taut, well-told story and confirms to almost every sacred canon of good thriller-making. Right from scene one, it grabs your attention and keeps you on tenterhooks with well-crafted twists as the plot builds up to it’s climax. Unfortunately, the climax is rather disappointing with a great deal of needless melodrama in the last 10 minutes of the film – something that effectively ruins it for me, in spite of Ashok Kumar’s superb performance and the absolutely gorgeous music. 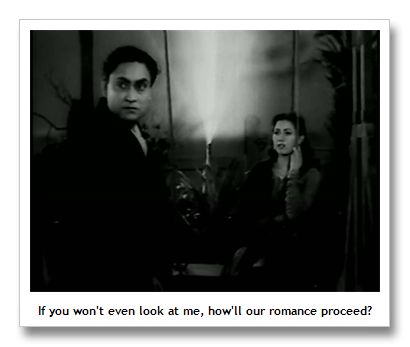 Apart from it’s claim to fame for being one of the first Hindi mystery thrillers, the film is also famous for catapulting Lata Mangeshkar (and Madhubala) into Hindi film world’s big league. So I was not surprised to find that each and every song – and there are many of them - is a gem. I grew up listening to most of them, particularly Aayega aanewaala and Mushkil hai bohut mushkil. What did surprise me, though, was how good the background score was – it was hauntingly beautiful and just right for the plot. 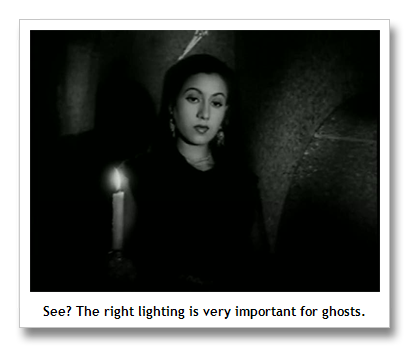 Having said all that, I must admit that Mahal will never make it to a list of my favourite movies, and not just because I dislike the climax. While the plot is very well written and executed, the characters themselves are far from likeable. The three main protagonists come over as rather self-absorbed and three parts insane! The writing makes a commendable effort to show us that Shankar’s experience in the haunted mansion had a profound psychological effect on him, and that everything else is a logical outcome of that, but he still comes over as mentally unstable and ripe for all the drama that follows. By the end, I really did not care whether Shankar, Kamini and Ranjana achieved happiness or not. However, there is no denying that it is a remarkable film, well worth watching for it’s unusual plot, lovely music, great cast, and stunning cinematography. So if you haven’t already seen it, you really should!
Posted by Bollyviewer at November 21, 2010