Who does not like Robin Hood? He’s the stuff of romance - he robs the rich to give to the poor, helps the needy, fights against oppression and is an all round good guy. Naturally, that isn’t what makes him so popular at the box office. His other good qualities are responsible for that - he is tall and handsome, shows off to good advantage in tights (how many men can do that?), can fight with any weapon (guns excluded), keeps cracking jokes while vigorously fencing with foes, and is extremely chivalrous. In short, filling Robin of Locksley’s shoes is no easy job, even though Errol Flynn makes it look like it is! Of course, you all know the story of Robin Hood, but I’ve just finished watching this beautifully restored film and need an excuse to post the screen caps. So I will tell you the story all over again, with LOTS of screencaps! 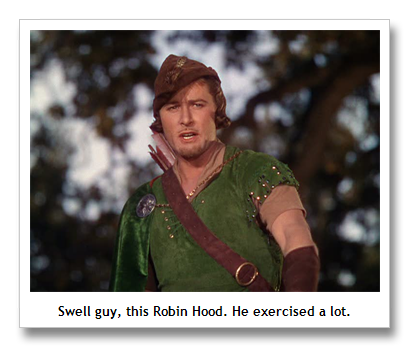 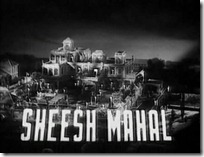 It’s always nice to see a 40s heroine who isn’t raring to martyr herself on the altar of duty, especially when the film co-stars my favourite - Sohrab Modi. I can see that you’re pointing an accusing finger at the film’s release date, which is, admittedly 1950. But I assure you, this film really does not feel like a 50s film. My womanly intuition tells me that this was shot in 1949. And no, I do not need anybody to ruin my beautiful theory with ugly facts.
Now that we’re all agreed that it’s a 40s film, let’s examine this unusual heroine. She has all the attributes of a "good" woman. Dutiful? Check. Conscious of her family’s izzat (honor)? Check. Always sticking to the straight and narrow and making sure that others do, too? Check. But unlike a lot of other Bhartiya naaris, she does not suffer in silence. She is also educated, independent, sassy and not entirely above modern ideas. Which does not mean that she is a feminist - she is Bolly-naari, after all. But she does her bit to restore my faith in 40s/50s Indian womanhood. The character is named Ranjana, and is played by Naseem Banu. Let’s see what she gets up to… 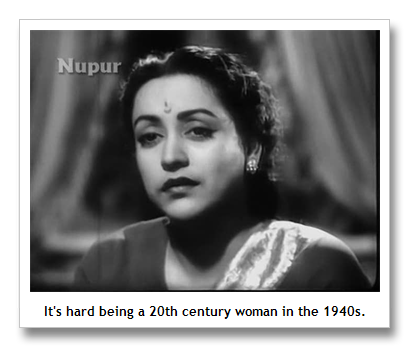 I’ve wanted to watch Mujrim, ever since I read the review over at Dustedoff’s. Since I’m trying to keep to my resolution of curbing my DVD-buying sprees, I decided to settle for it’s remake that I already own – this film! From the synopsis, this appears to be a very faithful copy, and left me just as dissatisfied as the original seems to have left it’s viewers! Why is it that some movies do not quite live up to the promise of their plots? It’s one of the great unsolved mysteries of our times. Sadly, while this film belongs to this mysterious category, it does nothing to help solve the mystery! It begins well enough, the story warms up pretty nicely and even gets along at a good pace – yet it all dissolves into some silly plot-twists and unnecessary melodrama at the end. 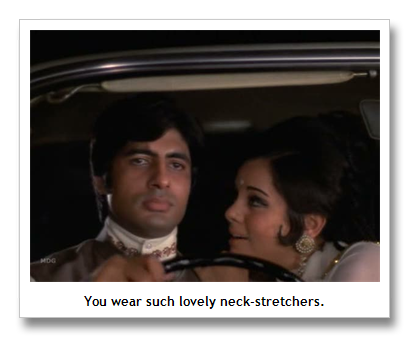 Masala patriotism is not my favourite genre, but where there are rules, there are exceptions to rules. And this film is firmly in the exception-to-rules category as far as my no-unsubtle-patriotic-films rule goes. I picked this up because it stars Ajit and Helen, and have no reason to regret my choice. 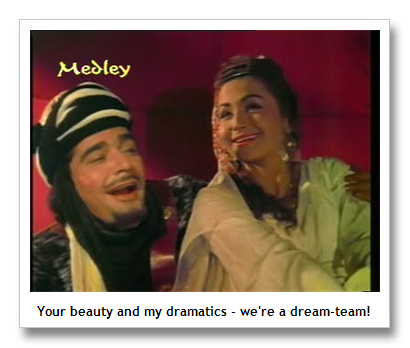 Emperor Shahbaz (Samson?) has been conquering new territories right left and centre, leaving death and destruction in his wake. His latest conquest is Yakistan, whose king has surrendered, but a loyal patriot – Kabli Khan (Ajit) – refuses to admit defeat. Kabli Khan is held prisoner by Shahbaz’s army, but manages to escape with like-minded prisoners and stolen arms. He gets home to his village, just in time to save the village from being looted by Shahbaz’s soldiers. A further batch of the conquering soldiers are driven out, soon after. They return to Shahbaaz, to get the dressing down of their lives. (If only Sholay were out - Shahbaaz would’ve known how to treat his defeated soldiers!)
Read more »
Posted by Bollyviewer at August 08, 2010 21 comments: