It is James Bond on weed – i.e., a Bond movie made entirely by a cast and crew who were high on weed! Its psychedelic, its wackadoo, AND has almost as many famous cameos/guest appearances as Deewangi deewangi! There is no coherent plot and nothing makes any sense. And yet, strangely enough, its a lot of fun while it lasts. It really must be seen to be believed, but I’ll try my hand at describing what I recall from my first viewing, yesterday. 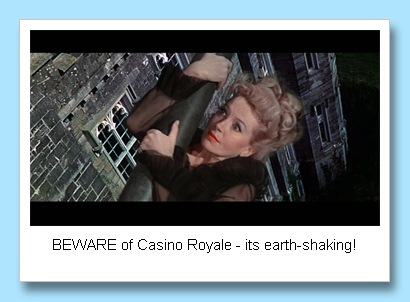 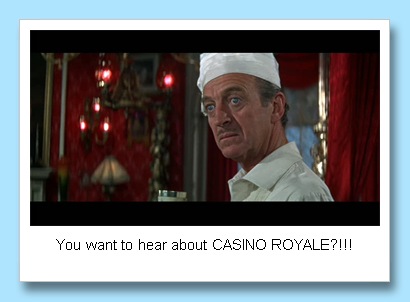 The original 007, now Sir James Bond (David Niven) has long retired. The franchise, however, has been kept running by the MI-6 - they needed the respect that only a 007 could bring to the service! Unlike the garden variety Bond that MI-6 has introduced to the service, the original was a “member of a select and immaculate priesthood, vocationally devoted and sublimely disinterested”. Sir James strongly disapproves of the “sexual acrobatics” and “wretched gadgets” of his current successor, and tells M (John Huston) so, when the latter visits him along with the heads of 3 other great espionage agencies – Ransome of CIA (William Holden), Smernov of KGB (Kurt Kaszner) and Le Grand of Deuxième Bureau (Charles Boyer). Turns out the espionage agencies have been losing agents right, left and centre (pun intended) and want Sir James to help. When he refuses, his home is blown up on M’s orders. M is also killed. 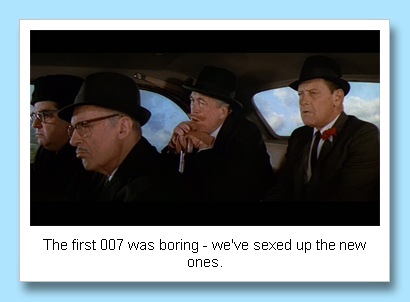 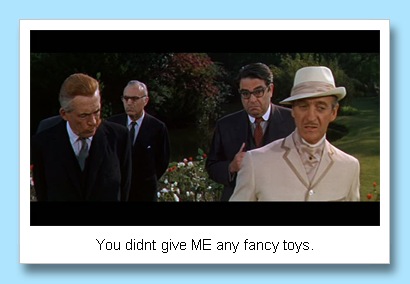 Cut to SMERSH headquarters where “Plan B” is put into action: M (or MacTarry, to give him his full name) had a castle in Scotland which is now occupied by SMERSH agents, one of whom - agent Mimi (Deborah Kerr) – pretends to be M’s widow Lady Fiona. 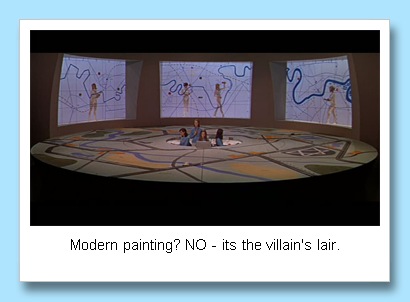 Sir James proceeds to MacTarry Castle to condole with “Lady Fiona” and is amazed to find the castle choc-a-bloc with nubile teenagers who all claim to be M’s daughters, and insist on bathing and undressing him! Sir James resists all advances, and even refuses to give the widow her due (a ceremonial night in her bed!). The angry Lady Fiona gets him to “wassle” – a game of passing-and-breaking-the-ball that is played with STONE footballs! Sir James acquits himself so well that Mimi/Fiona falls for him. There follows a bizarre grouse shoot where the grouse attempt to kill him, and then Mimi decides to take the veil when Sir James refuses to reciprocate her affections. 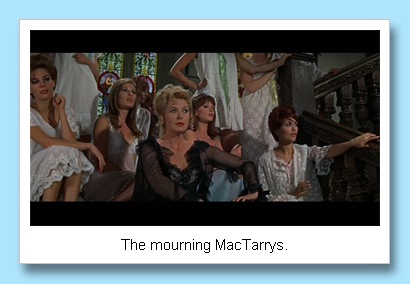 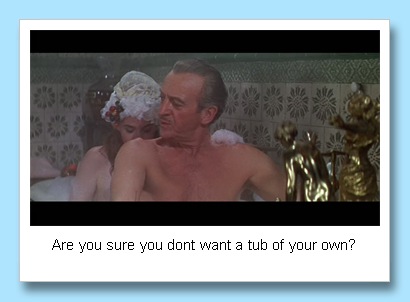 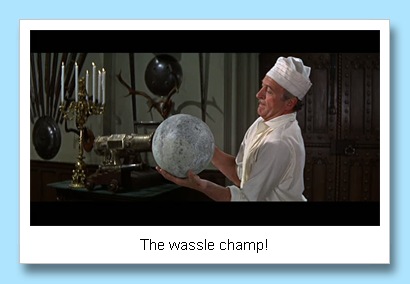 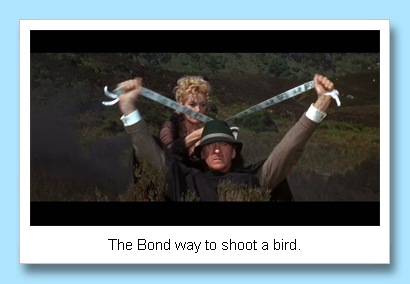 Unfazed by all the drama, Sir James starts off for London. En route, he foils more attempts on his life. Once in London, he takes over as head of MI-6 and orders an AFSD (anti female spy device) to fight SMERSH’s platoon of female spies. Moneypenny (Barbara Bouchet) vets all presentable spies for their attractiveness to females. The lucky candidate – Cooper (Terence Cooper) – is named Bond 007 and trained in the art of resisting female seduction. 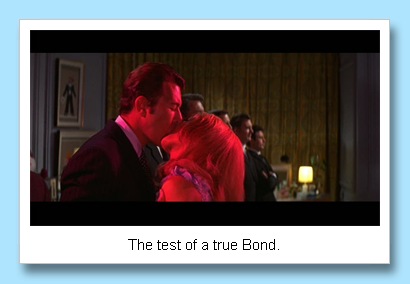 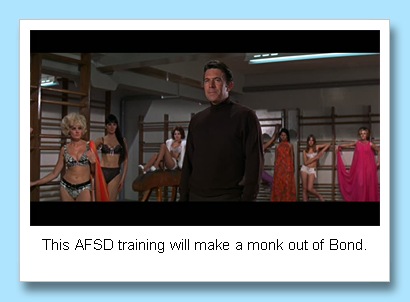 So now we have three Bonds – Sir James, the AFSD Bond, and Sir James’ goofy nephew Jimmy Bond (Woody Allen). I forgot to mention Jimmy didnt I? There was just so much going on, its hard to remember everything! Anyway, three Bonds arent enough - one to run the MI6, one to resist the female-spy invasion, and one to goof off. We still need more to save the world! Enter Evelyn Tremble (Peter Sellers), a treasury clerk who knows how to gamble. Vesper Lynd (Ursula Andress) is deputed by Sir James to seduce recruit Evelyn for gambling against SMERSH sponsored gambler Le Chiffre (Orson Welles). Once recruited, both Vesper and Evelyn also become Bond 007s. So the Bond count is now up to 5. 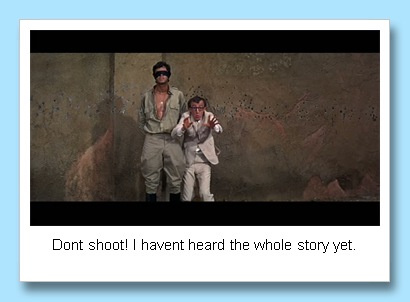 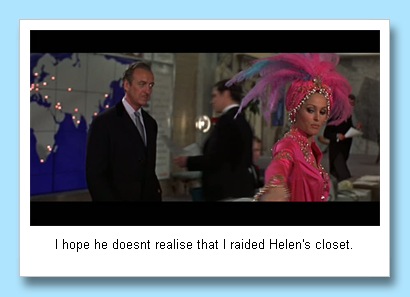 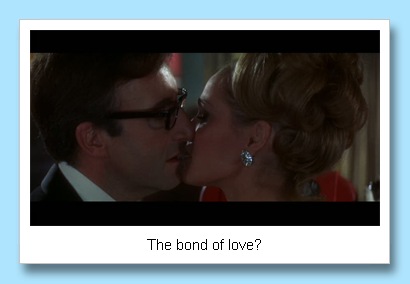 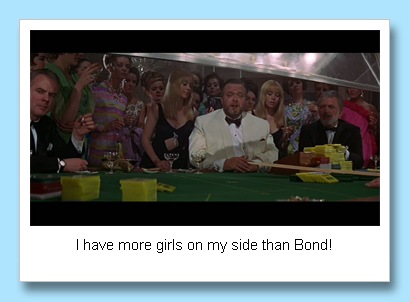 But wait… I am forgetting another important Bond - Mata Bond (Joanna Pettet). In case you havent guessed from the name, she is the daughter of Sir James Bond and Mata Hari! She is brought in for – I forget… By this point, I gave up even my half-hearted attempts to keep up with the non-existent plot or keep track of the number of Bonds in there (there were several Bonds-in-training at the 007 Bond Training School, too). I just went with the flow and wallowed in the cheesy craziness that was The Royale. 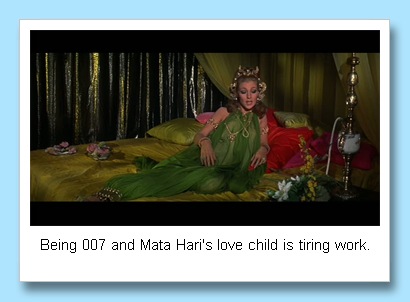 There were bizarre stunts, sets that beat any 70s villain-lair in their over-the-top craziness and splendor, and all sorts of people kept popping up. Much of the craziness was explained in the special features section – the movie was directed by at least 5 different directors and the script was re-written (several times) to accomodate the directors’ whims, the major actors’s whims (Peter Sellers was apparently the most difficult of the lot), as well as give a part to any other famous actor the directors could rope in for a cameo/guest appearance! No wonder nothing made sense!!!! Well, it may be a lesson in how NOT to make a movie, but its a fun ride and definitely worth a watch. Just remember to check your brain at the door before you step into Casino Royale!
And because I'd hate to waste all my screencaps, here’s some of the bizarre and the beautiful from the film: 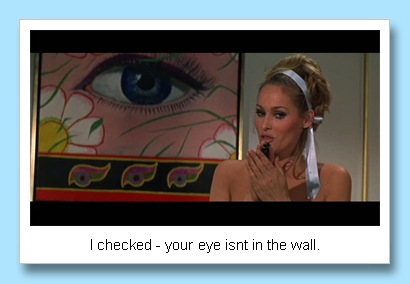 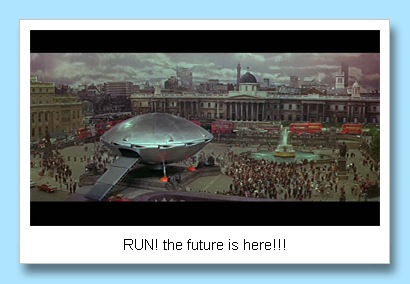 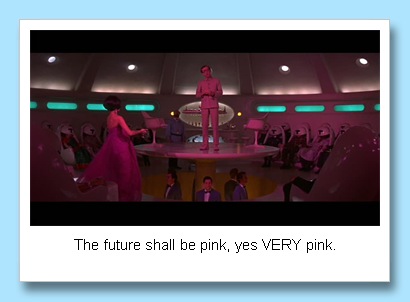 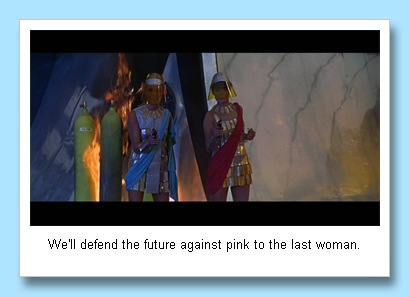 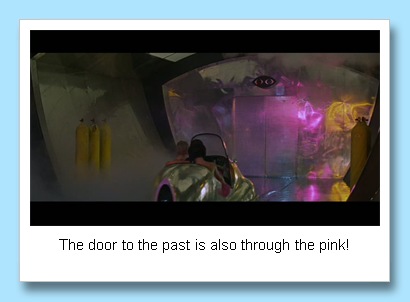 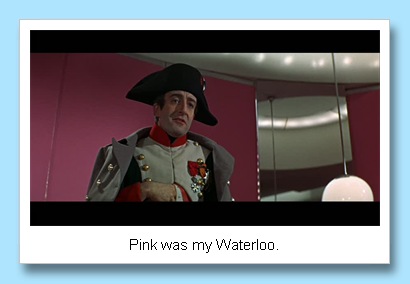 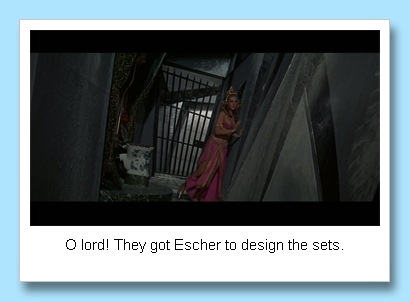