“When you forget your own religion, you also forget hatred against other religions. If only everybody in this country had amnesia – it would solve all our communal conflicts.” Thus spoke our amnesiac hero, whilst I valiantly tried to imagine a gigantic operation mounted by the army to bop every one of India's 1.2 billion people over their individual heads to solve India’s caste/religious problems! Though my imagination isnt built on the scale required to accommodate such ideas, I do recognise good intentions when I see them, and this film is chockful of them. More importantly (for me at least), it is also brimming over with some of my favorite beautiful people (Shashi Kapoor, Hema Malini, Naaz, Helen) and some nice songs. Here’s one that I’ve been humming ever since I saw it! 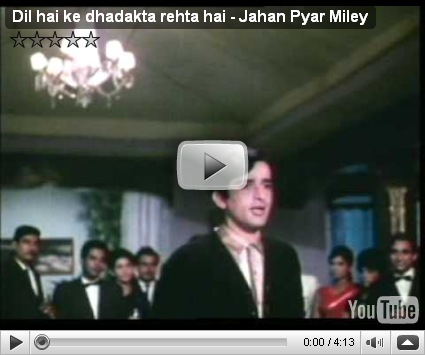 A train accident results in our hero (Shashi Kapoor) losing his memory, turning him into patient #12.* He tries hard to remember himself – even going so far as to interrogate his mirror image, but comes up against a blank wall. His kindly doctor (Iftekhar) says there is no cure for amnesia. Really?!!! Clearly, he’s never watched any films. Instead of giving him the required knock-on-the-head cure, the doctor puts #12’s pictures in the papers, asking for information! 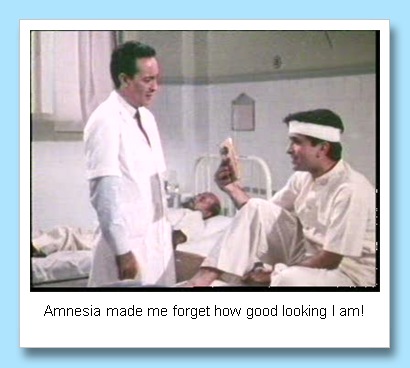 When nothing is found, a sad #12 walks out of the hospital looking for love. He tries to find shelter in “Gandhinagar” but is refused accomodation because his name and religion are unknown! In his quest for love and human warmth, he finds instead, a pair of crooks trying to sell a stolen baby to a childless rich couple – Deewan Bahadur (Nasir Hussain) and his wife (Nadira). The couple is grateful to #12 for saving them from adopting a stolen baby – but not grateful enough to adopt him as he suggests (understandable – he is cute, but NO substitute for a BABY!). 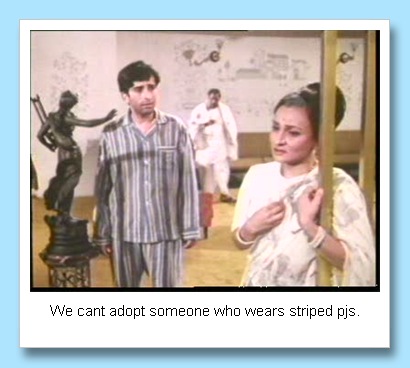 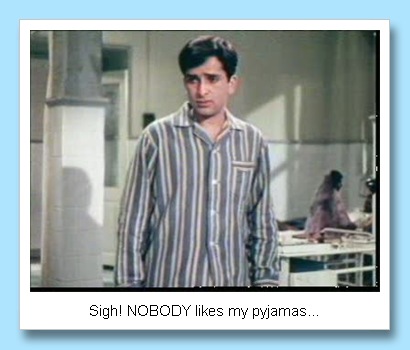 The Deewan Bahadur decides to help #12 out. To this end, he names #12 ‘Vrajendra’, promises him a job at his hotel and finds him a room in a boarding house. There, Vrajendra gets friendly with an Urdu poet – Shaida (identified as Badri Prasad thanks to Dustedoff). When Shaida hears of Vrajendra’s amnesia and consequent lack of religion, he decides that Vrajendra needs a Muslim name as well! So, Vrajendra becomes Kalim to Shaida and his Muslim friends. Among these friends is the rich Mir Sahib (Kamal Kapoor) and his lovely daughter Nazreen (Naaz). Nazreen hears him singing Shaida’s poetry, and falls for him like a ton of bricks. 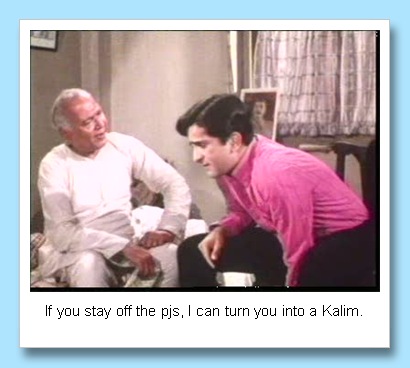 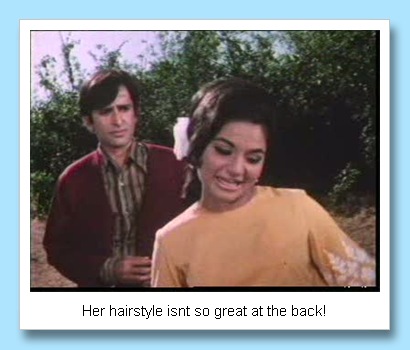 And Nazreen isnt the only one to fall for him. Vrajendra’s singing at Deewan Bahadur’s hotel impresses famous singer Lalita (Anjali Kadam) who is smitten with him and decides to start him up in a singing career. If you think that’s the end of Vrajendra/Kalim’s conquests, you are wrong. He does need a Christian girlfriend as well, else national integration would be incomplete! The Christian love-interest is provided by his hospital Matron’s niece Angela (Helen) who is also a dancer at the hotel. To Angela he is Richard – which is what the Christian Matron has decided to name him! 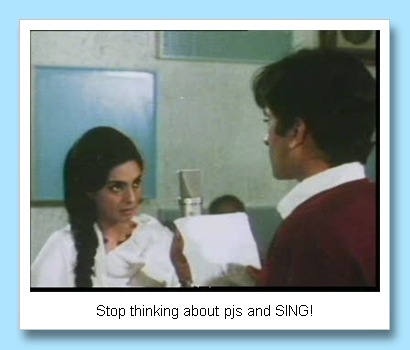 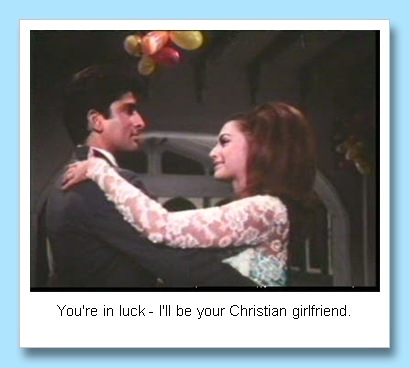 While all these women have been busy falling for him, Vrajendra/Kalim/Richard (we’ll just call him Vrajendra since he spends most of his time as that) hasnt been idle. Apart from collecting names and religions, he’s been adventuring on his own account. He boldly goes where no man has gone before – aka the ladies loo – and shocks the retiring Bina (Hema Malini) in the midst of a shower. The poor girl is then horrified to see him in her office and is convinced that he is following her around! But Vrajendra is just reporting to Deewan Bahadur for his promised job – something that his secretary Bina soon finds out. She isnt convinced of his goodness, though, till he takes care of her during an illness. Then she begins to fall for him, while he is still thinking about which one of his three girl friends’ proposals he should accept! 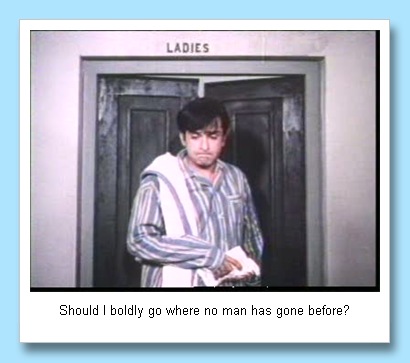 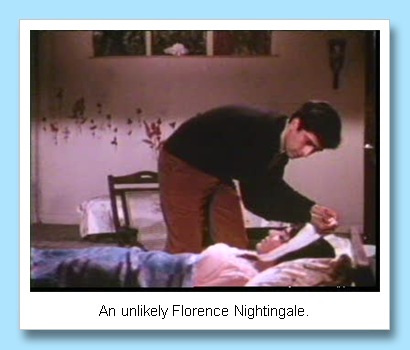 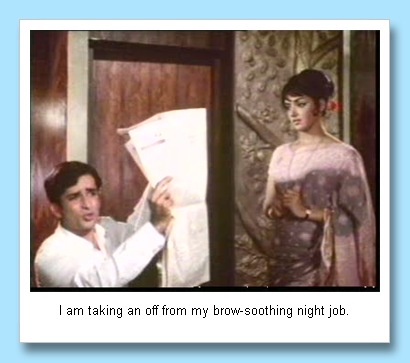 Poor Bina! She has a lot of other problems, too. Her mother died long ago, leaving her to the care of a crooked Uncle - Muralidhar (Jeevan) - who isnt above stealing from her. She doesnt know who her father was/is, which makes her even more of an outcast than Vrajendra. Plus, her beauty attracts unwanted attention from the Deewan Bahadur’s UK-returned nephew Prem (Narendra Nath). Prem’s growing attraction to Bina worries the Deewan Bahadur’s wife, and she has Bina dismissed from her job. 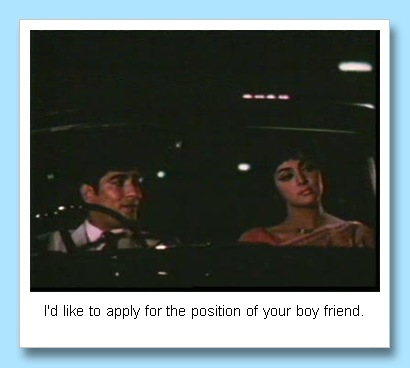 Bina’s financial troubles arent allowed to get out of hand because Vrajendra is now a famous and rich singer (hey, it can happen to anyone in the twinkling of an eye!) and beginning to realise how much he loves her. Just as they are about to embark on a beautiful relationship, lightning strikes in the form of Vrajendra’s wife (Zeb Rehman) who comes to claim him. Turns out that they lived in Africa and he had come to India for a trip. When he didnt return, she came over to look for him. From being a carefree, rich, bachelor with FOUR women in love with him, Vrajendra suddenly turns into a long-suffering husband. And Bina is now the despised ‘other woman’ who is scorned by everybody! 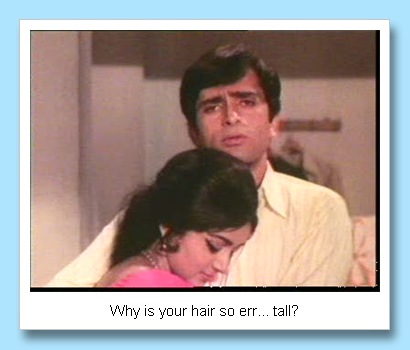 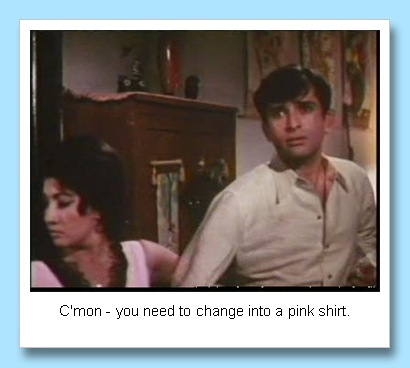 Think thats a lot of drama already? Well, there is more, LOTS more! Everybody is horrified at Vrajendra forgetting his religion, and tells him so at length. Then, there are the poor Hindu and Muslim communities in Gandhinagar whom Vrajendra is trying to unite and help with his newly earned wealth. Of course, the rich Deewan Bahadur and Mir Sahib want to throw out the poor people and build a five star hotel there (why do people always want to make posh hotels in slums?!!) – so they contrive to create Hindu Muslim clashes in Gandhinagar. Bina, who goes to Gandhinagar to live with her Uncle, gets caught up in those clashes. Vrajendra goes there to stop them and rescue Bina, and FINALLY gets the requisite knock-on-the-head. 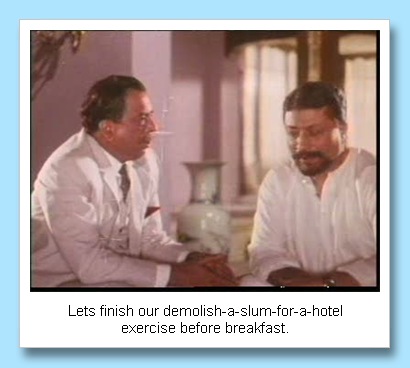 One thing that did strike me was how each religion was portrayed. The Hindus were the most powerful of the lot. The Hindu girl friend’s family was also the least accepting of Vrajendra, once they found that he may belong to some other religion. The Muslim family was willing to take him, but only if he would forsake all other religions. The Christians were the least important of the lot, and the most accepting. Vrajendra says at one point that to be a human being in a world of human beings is not enough, you need to belong to a religion to get any warmth or affection. So, though agnosticism was not an option, it did get a mention! And the film does make a point of suggesting that a person’s religion is his/her personal affair and everybody else should just mind their own business. 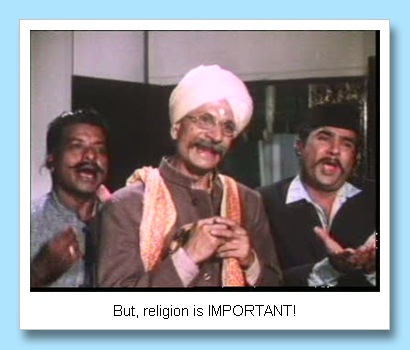 The movie has some sweet moments (especially the Shashi-Hema scenes, which were super cute), some nicely done humor, a complete absence of the 60s requisite comic side-plot, and a rather unusual concept (I may not be in favor of forcibly giving the Indian population amnesia, but I cant deny that its an attractive idea!). For the most part though, it is a tad too preachy for my taste. There is a lot of good advice on peaceful religious co-exisetence which is very well intentioned, but could have been more subtle. Plus, everybody’s pre-occupation with Vrajendra’s birth religion stretches my suspension of disbelief no end. (His being born in a Muslim family, at least, could have been verified pretty easily!) The film also has enough melodrama to keep a soap opera running for months! 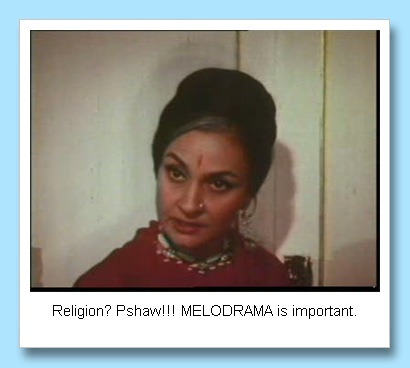 Overall, its a sweet film with a great message, but is not really a very good one. So unless you are a sucker for 60s Shashi Kapoor (like me) or Hema Malini, or message movies, I suggest you content yourself with the songs on youtube! 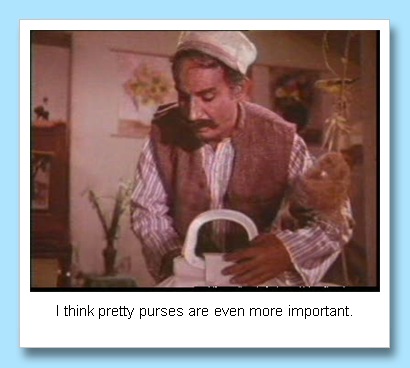 *Do check out Dustedoff’s awesome post on filmi-logic’s great mysteries and find out what a hero/heroine’s train ticket costs their co-passengers!
A BIG thank you to Gebruss for sending me this film!
Posted by Bollyviewer at August 25, 2009