Shweta’s great write-up reminded me of this childhood favorite and when I found the DVD in my local store, I just had to buy it. And guess what, its even more fun than I remember!
One thing we need to be absolutely clear about: other than some vague similarities to the original, the movie has nothing to do with the Arabian Nights' tale. The story is crammed with characters and twists. Its going to test your extensive movie watching experience to keep up with whats happening, so come prepared. Suspend all disbelief, forget all about the original tale, and keep a pen and paper handy to keep track of all the twists and turns. Done? OK. We’re all set for a fun ride into fantasy land with Garam Dharam, Zeenie Baby, Hema, and a host of Soviet actors whom I dont recognise. 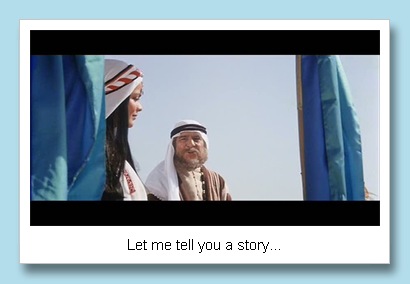 Once upon a time, long before the world discovered explosives, Madan Puri invented baarood (gunpowder or dynamite?). Yes really! Not only that, when he was travelling in a caravan that was attacked by the titular 40 thieves, he thought it was as good an opportunity to test baarood’s efficacy as any. Human experiments?!!! Unfortunately for the barood-manufacturer, the thieves have an even more effective weapon – a boomerang! With a boomerang, the leader of the thieves - Abu Hasan (Rolan Bykov with Amrish Puri’s voice!) - is able to quell the “satanic” fire and capture the barood-manufacturer and his daughter Fatima (Zeenat Aman). (Aside: shouldnt defence ministries world over be looking into this boomerang technology?) 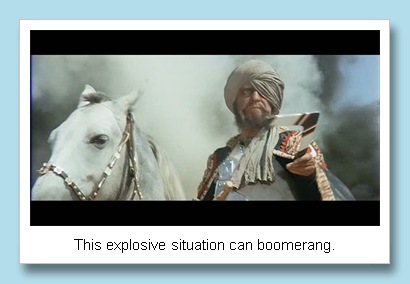 In captivity, the barood-manufacturer has to make barood for the thieves while his daughter is forced to gather material for its manufacture, as well as information, from the nearby city of Gulabad. On one of her fact and material gathering missions, Fatima runs into the brothers Ali (Dharmendra) and Kasim (Zakir Mukhamedzhanov). 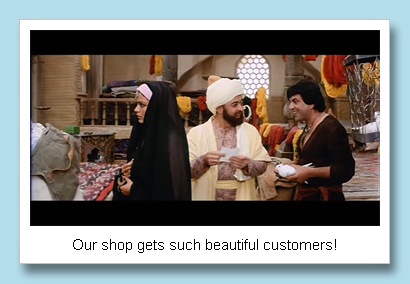 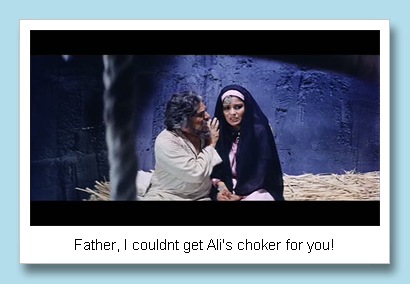 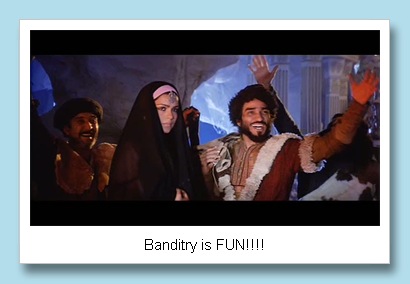 Ali is a good-natured wastrel and the apple of his Mom’s eye (played by Sofia Chiaureli). Older brother Kasim is an industrious shopkeeper who keeps the family business in Gulabad running while their father Yusuf travels abroad to buy goods for their business. Now, Yusuf left on his goods buying expedition while Ali was a small child and hasnt returned since. That makes it what – a 40 years long business trip (Dharam was about 45 when the movie released)? Whew! How on earth did he find the money to keep buying stuff for so long? But, hey, suspension-of-disbelief blinkers ON. 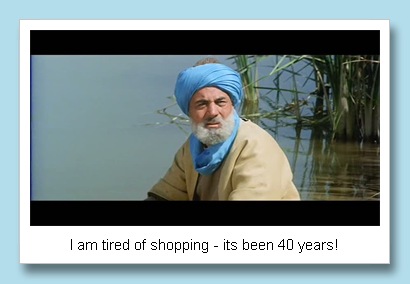 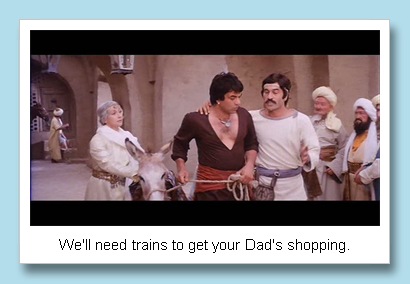 With barood in his possession, Abu Hassan is unstoppable. The city’s ruler - the benevolent Qaazi Nooruddin - is no match for the dacoits. Abu Hassan blows up the dam that supplies water to Gulabad and in the process, annihilates the caravan bringing Yusuf home after decades. The destruction of the dam causes the river to flow underground (remember - suspension of disbelief) and deprives the city of its desperately needed water-supply. The important thing is that the outgoing water carries Yusuf to the palace of the King of the realm (Pinchoo Kapoor). 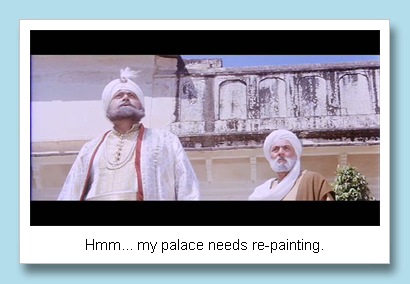 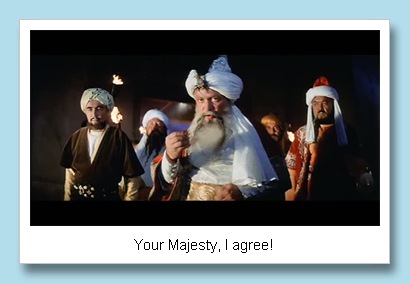 The King and Yusuf become good friends and when he is killed in a coup by his military chief Shamsher (Prem Chopra), it is Yusuf who saves the princess Marjina (Hema Malini) with some help from Ali. Of course, as is customary in good masala, Ali and Yusuf do not introduce themselves and are unaware of their close relationship. The three manage to escape and join another ill-fated caravan to Gulabad. Abu Hassan’s gang strikes once again and Yusuf is fatally wounded while Marjina is captured by a lascivious merchant. 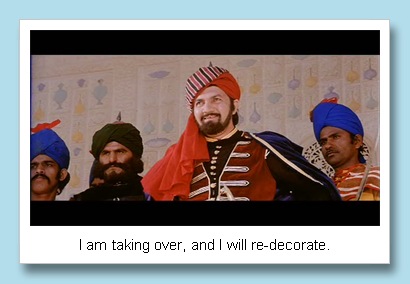 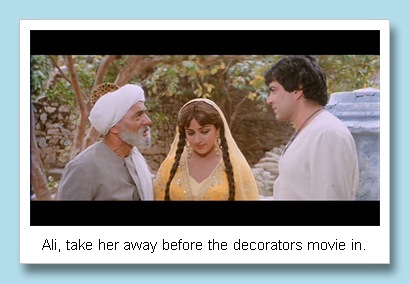 Ali is able to take Yusuf home for his death-bed re-union with the family. Once Yusuf is buried, Ali sets out to find Marjina. He discovers her being auctioned in the market as a slave and buys her with money he doesnt have! Brother Kasim supplies the cash on the condition that Ali forfeit all claim to their ancestral property. 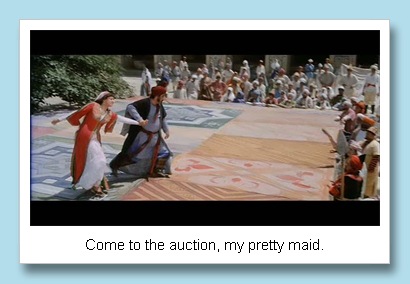 Kasim’s greed is going to take him into deeper waters yet. He meets Fatima and finds that she can make her way to the bandits’ hide-out. The two of them conspire to get there – he for the money, she to avenge her father’s death (he committed suicide to free her from the bandits). 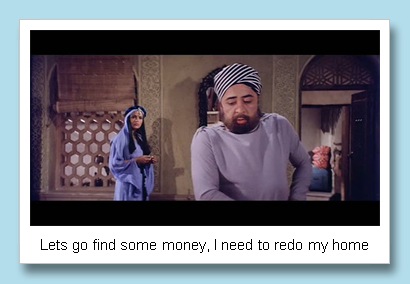 Ali in the meantime, takes to woodcutting to earn money. While out doing what a good wood-chuck does, he discovers the bandits' hide-out. And what a hide-out it is! There are fireworks, treasures, luxurious furnishings and best of all, a resident spirit! Being a good man, Ali decides to use the money to rebuild the dam and restore the city’s defences. His good friend Hamid (another unknown-to-me Soviet actor) helps him. 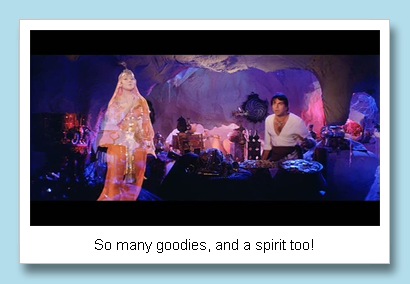 There are several more breath-taking twists and turns before the happily-ever-after kicks in. The movie is a total masala-delight. From the lovely people to the gorgeous sets and the range of costumes (they range from Arabic to middle-ages Mongol and Cossack to nineteenth century Indian!), bad special effects and fun songs – it has everything that a masala-addict craves. If that isnt enough, the story moves at a delightfully fast pace with new twists every few minutes! My only complaint was that the Soviet actors were probably speaking their dialogues in Russian and their lip-sync for Hindi was all off. That grated a bit. And it was odd to hear Amrish Puri’s voice issuing forth from the evil Abu Hasan’s mouth! But such minor quibbles apart, I spent a very entertaining couple of hours with it. 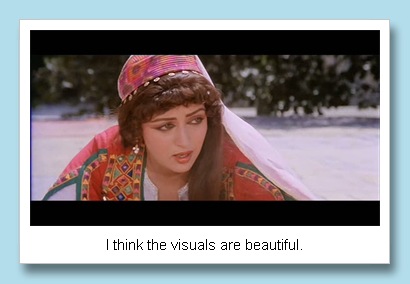 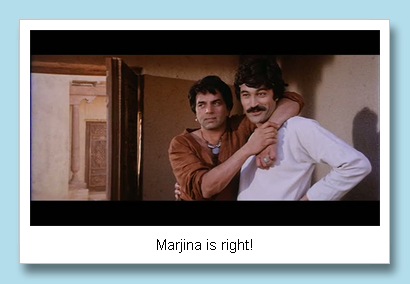