The spate of Madhubala dedications* on her birthday (which falls on Valentine’s day), reminded me of my favorite Madhubala romance that I just had to re-watch This one has her paired with Ashok Kumar in my favorite kind of romance – the bad guy reformed by TRUE LOVE!!!! Now, who wouldnt be reformed by love of Madhubala? Certainly not our revered Dada Mani.


The movie opens with a grim scene - a doctor (Mahmood in an uncharacteristically serious avatar) telling a stunned father (Nazir Kashmiri?) that his daughter has only a year (ek saal) to live. 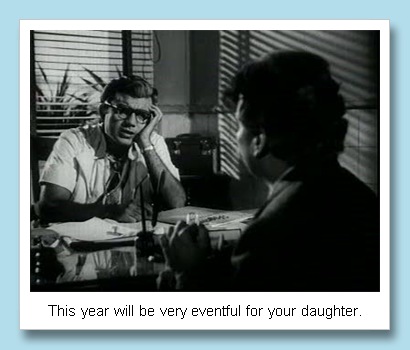 Cut to the happy daughter - Usha (Madhubala) - celebrating her birthday at her grandmother (Pratima Devi)’s place in Lucknow. The irony of the wishes - tu jiye hazaaron saal (may you live a thousand years) - is completely lost on the suave society burglar Suresh (Ashok Kumar). He is intent on stealing grandma’s 10 grand necklace and succeeds admirably. 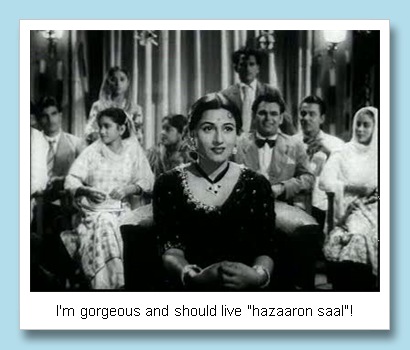 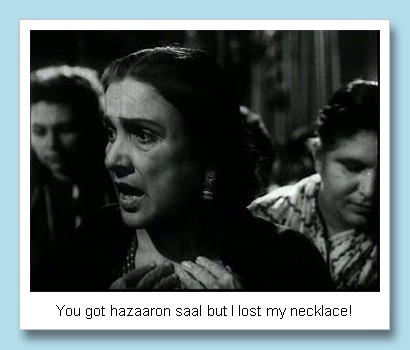 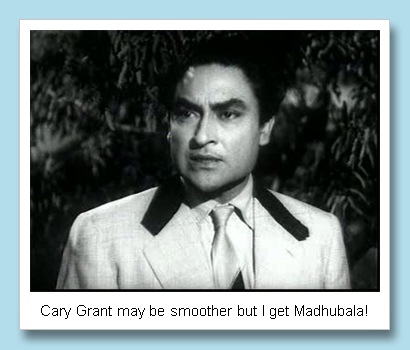 Unfortunately for Suresh, the robbery is complicated by the appearance of the Wodehousian detective J. B. Pinto (Johnny Walker). Suresh is forced to hide the necklace in Usha’s purse and lands up flirting with her to get it back. Usha is not at all taken with Dada Mani’s charming smile (excuse her please, the woman has a tumor on her mind!) but he still manages to get back his spoils. Suresh’s flirting hasnt escaped the eagle eye of his partner Rajni (Kuldip Kaur) who is more alive to Usha’s loveliness than Suresh is. He assures her however, that he is a businessman and unlikely to fall in love. (Geez dude, have you looked, I mean LOOKED at her?!!!) 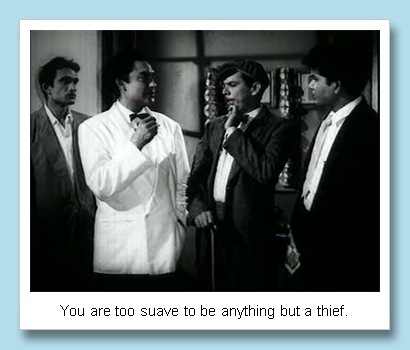 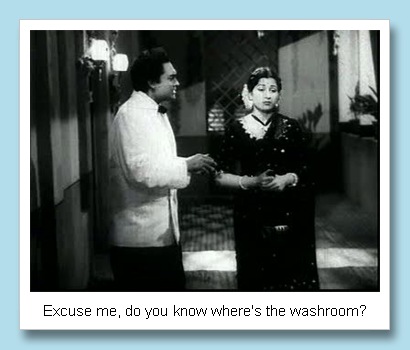 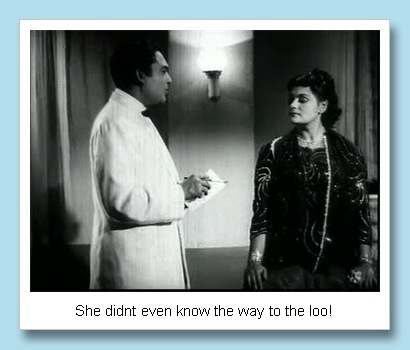 Her birthday celebrations over, Usha returns home to her father’s estates near Bombay. Unbeknownst to her, her father - Colonel Sinha - has engaged a new estate manager who is none other than Suresh (with some forged qualifications). Suresh’s plan is to win Colonel Sinha’s confidence and lay his hands on the estate’s liquid assets. A plan that receives unwitting aid from Usha who finally wakes up to Suresh’s charms and falls head-over-heels for him (Dada Mani triumphs over brain tumor’s sense-deadening effects. Yay!). 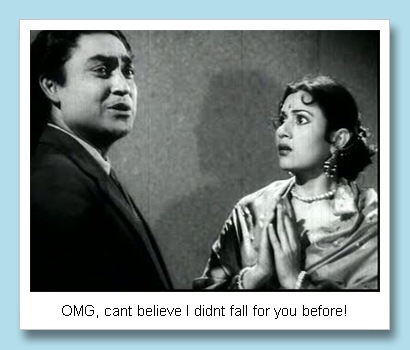 Suresh isnt too keen to play along until Col. Sinha offers to pay him a monthly retainer to keep his dying daughter happy. Usha is deliriously and heartbreakingly, happy in Suresh’s love and her father’s consent for their union. Suresh’s note-counting dil (and equally mercenary brain) is very alive to the advantages of prolonging her life – the longer she lives the more money he earns. So, he begins to look for a cure or at least a way to prolong her life. Of course, he doesnt realise that he is in a movie and the only fail-proof cure for everything in movieland is LOVE. 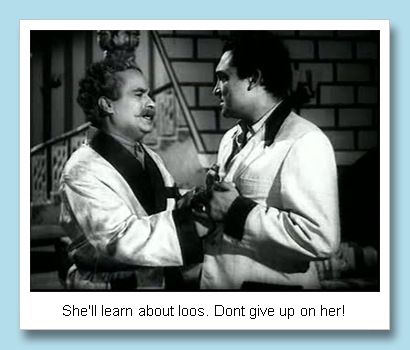 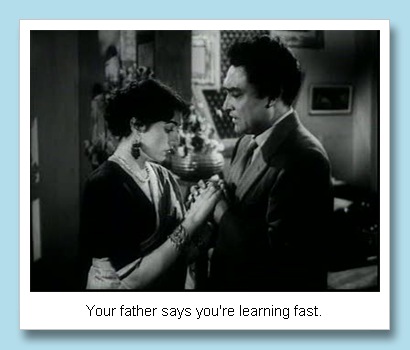 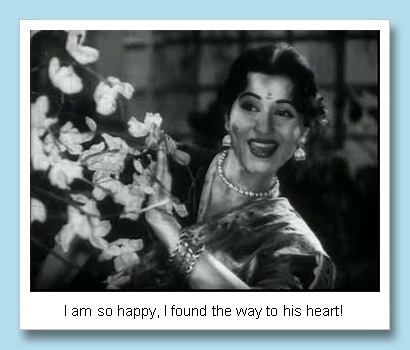 Suresh’s partner, the evil Rajni, isnt convinced that the Suresh-Usha romance is all playacting on his part and is scared of losing him. She employs detective Pinto and his assistant (Minu Mumtaz) - to find out about Suresh’s real feelings! Even Holmes would be puzzled at how to read a lover’s mind and Pinto is definitely not in the same league. As it turns out, this is just the pointless comic diversion and we may safely fast-forward to the more interesting bits. 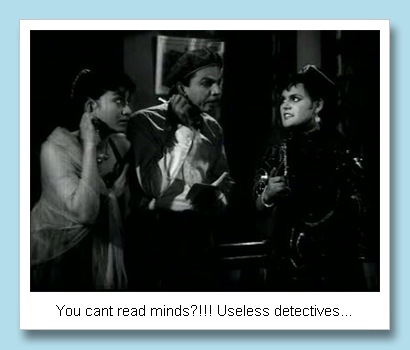 The more time Suresh spends with her, the more he is impressed by Usha’s goodness and the strength of her love for him (umm, being Madhubala has nothing to do with it, huh?) and his conscience smites him for deceiving her. But just when Suresh is beginning to realise that his feelings for Usha go a lot deeper than his monthly retainer, Rajni reveals ALL to Usha. Poor, heartbroken Usha collapses, and her ek saal looks like its coming to a premature end! And poor, poor, Suresh who’s about to lose his new found love in more ways than one. How does it all end? Hint: this isnt a Dilip Kumar film, so watch without fear! ;-) 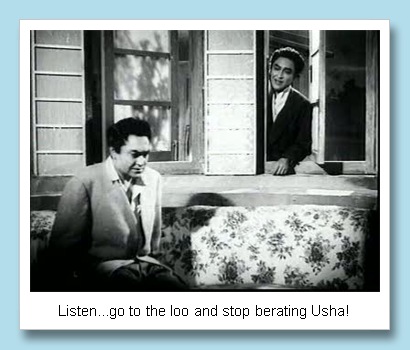 Madhubala is at her beautiful best. She teases, she laughs, she cries, she loves, and shines through it all. Ashok Kumar is great as usual and oh so charismatic… sigh! When I read Manto’s anecdotes (memsaab, thanks a lot for recommending the book) about how women fans used to mob him in public, I found it hard to imagine (hey, I grew up watching him play benign grandfather!). But after this movie, I doubt no more! Here he is Ashok Kumar the hero and charismatic star. Kuldip Kaur (according to Manto she was very much the-lady-behind-the-man for Pran) was absolutely made for the role of evil vamp - heaven help the man who stands in her way! 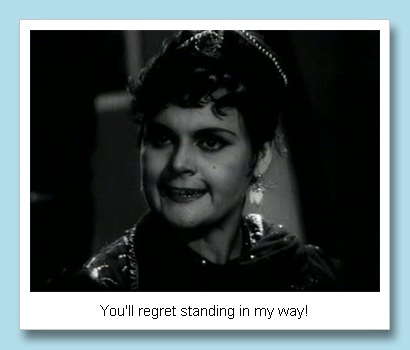 This is a perfect movie for those snowy days (or rainy days if you are lucky enough to live in warmer climes) when you want to curl up on the couch with a good movie complete with great actors and lovely songs. 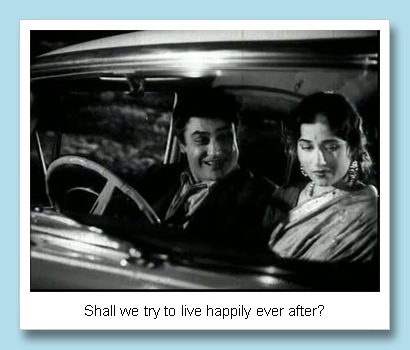 *Madhubala Day was celebrated by Dustedoff, theBollywoodFan and Richard!
Posted by Bollyviewer at February 17, 2009