The bad and the beautiful – catching up with 2007 films

My dwindling bank balance has decreed a strict moratorium on DVD-buying sprees. How then to quench the thirst for movies and more movies? This is where Calgary Public Library comes to the rescue! For the past few weeks I’ve been catching up on all the 2007-08 movies that I missed watching on the big screen. Here’s a brief review of some of them:
Salaam-e-ishq – Dard-e-dimaag for the viewer! 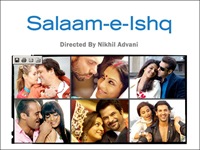 I cant say I began watching with a lot of expectations but I still managed to be disappointed! To those of you not familiar with the plot, the movie follows the love-under-threat stories of five loosely-related couples - Ashutosh-Tehzeeb (John Abraham-Vidya Balan) whose young marriage is under threat because of Tehzeeb’s tragic loss of memory; Shiven-Gia (Akshaye Khanna-Ayesha Takia) whose love is imperiled because Shiven doesnt want to commit matrimony; Vinay-Seema (Anil Kapoor-Juhi Chawla) whose marriage is going through Vinay’s mid-life crisis; Kamna-Rahul (Priyanka Chopra-Salman Khan) in whose love-story Karan Johar plays an unlikely cupid; Raju-Stephanie (Govinda-Shannon Esrechowitz) whose love story you hope and pray does NOT take off but does! There is a random sixth couple Ram-Phoolwati (Sohail Khan-Isha Kopikkar) whose unsuccessful attempts to consummate their marriage will [not] educate the uninitiated about the “donts” of marital sex.

The women in the movie do a great job. Vidya Balan was terrific as the woman who has forgotten her husband and cant cope with her loss of memory or his wordless anguish. I was surprised to find myself liking even Priyanka Chopra! She was quite charming as the extremely-over-the-top item-girl and Bollywood-star wannabe. The men though, were uniformly unlovable. OK no, John Abraham was nice. But for the rest, I couldnt understand why all the women seemed to care for their less than charming lovers.

Note to Juhi – if you must fall for a jerk, at least find a good looking one! Note to Anil Kapoor - NEVER shave off your moustache, you look like a shorn lamb! For Salman Khan, I need to revise my list of too-old-to-be-young stars. Note to self – stay away from any movie where Govinda acts, but catch his singing whenever you can (he is surprisingly tuneful).
The high point of the movie (for me) was a brief glimpse of K K Raina - a big favorite of mine from parallel-cinema world - as Vidya Balan’s Dad!
Dus Kahaniyaan – a mixed lot 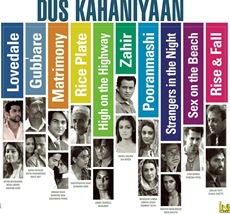 10 different stories, 10 writers, 6 directors and a huge ensemble cast come together in this compilation of 10 different films. The result is a mix of excellent, good, and plain bad movies. I was struck by the uncharacteristically subtle acting and well-edited narratives in all the 10 movies. For length considerations, I will only list the ones I liked…
Matrimony: Scratch the surface of a happily married, upper middle-class couple, and you might come up with – a surprise! Arbaaz Khan and Mandira Bedi as the happy couple were great but it was the story (its based on a short story by Roald Dahl) that impressed me.
Pooranmashi: Its a story of a forbidden love and its tragic consequences. Amrita Singh is awesome as the subdued middle-aged housewife of a domestic tyrant.
Strangers In The Night: A married couple (Mahesh Manjrekar and Neha Dhupia) exchanging dirty secrets on their wedding anniversary. Dont be put off by the erotic presentation – its a great film.
Zahir: Put together a lonely writer (Manoj Bajpai) and a beautiful swinging neighbour (Diya Mirza) and what follows is awfully nasty. The story had a very satisfactory end and some great acting by Diya who looked breathtakingly lovely.
Rice Plate: My favorite of the 10, its the story of a bigoted old woman (Shabana Azmi) who learns from her mistakes. Shabana Azmi + Nasseeruddin Shah = great movie, and this one was no exception!

Gubbare: The heartwarming tale of a middle-aged couple as told by the husband (Nana Patekar). I found myself warming to Nana Patekar’s irritating banter for the first time!
Johnny Gaddaar – a thrilling tale 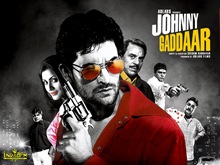 The best movie by far in this particular lot, it is a well told, fast-paced, thriller, with a twist at every turn. It follows the fortunes of five partners (Dharmendra, Neil Nitin Mukesh, Vinay Pathak, Zakir Hussain and Daya Shetty) who pool their money for a deal with quick profits. The youngest of the partners (Neil Mukesh) decides to co-opt the capital, and then needs to stay one step ahead of the rest of the gang to escape with the spoils and his girlfriend (Rimi Sen). 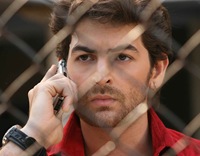 The narrative was a bit confusing at first as I couldnt figure out what was part of the “present” and what was the flashback. But once I’d sorted it out, the film was fun all the way through. A hard-boiled thriller in the style of James Hadley Chase’s novels (the movie is dedicated to Chase and Bollywood’s own thriller-king Vijay Anand) the story relentlessly carries you with it as it moves from twist to twist. And through all this, you never lose your sympathy for the man who kills his friends for money! 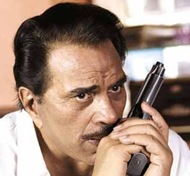 Performance-wise, all the cast was very convincing in their roles. Dharmendra was utterly charming as the gang’s genial but clever pater familias and Vinay Pathak did a great job in a role that, for once, didnt require comedy of him. Much as I loved Neil Nitin Mukesh – he was adorably blank-faced and terribly good-looking – I couldnt help but wonder what he’d look like with more expressions on his face. I am not complaining, mind you, just wondering while I look forward to seeing more of him.
Posted by Bollyviewer at November 19, 2008