It seems to be the season of "Top 10" in blogland. Both FilmiGirl and the Post-Punk Cinema Club have put up their selection of top 10 songs for various decades. Never having done a top 10 of anything before, I promptly and shamelessly decided to copy the idea. However, to weed out Top 10 songs from literally hundreds of songs every decade is a Herculean task and a beginner like me needs something much simpler. After much cogitation I settled on Top 10 Comedies simply because great comedies in Bollywood appear but rarely and it shouldnt be hard to select 10. Having committed myself to the task, I realised that Bollywood has way too many great comedies to make this any easier than top 10 songs!
What you see here is the result of sheer hard work and days of frantic weeding and ruthless trimming - I've even managed to limit myself to only two comedies each from directors Basu Chatterji and Hrishikesh Mukherji who between them were responsible for most of the great comedies in the 70s and 80s!
If jest be the food of life, read on... and dont forget to tell me about your favorite comedies.
10. Andaz Apna Apna (1994) - Yaallah!!

Two bumbling young men meet up on the path of get-rich-quick by attempting to marry the same rich girl. Alternately collaborating and competing with each other for their heiress, they run into bizarre villains, confusing look-alikes and every possible situation that a hero of a successful 70s masala block-buster could look forward to. From these trials they emerge triumphant, with their love-lives and fortunes made. What makes it especially amusing is its use of cliches to create a hilarious parody of masala movies. Salman Khan and Aamir Khan as the aspiring fortune-hunters are uproariously funny and ably supported by their heroines - Raveena Tandon and Karishma Kapoor - their villains - Shakti Kapoor, Shehzad Khan and Viju Khote - and the goody-baddy lookalikes played by Paresh Rawal. Raj Kumar Santoshi's tongue-in-cheek nod to 70s Bollywood still has me in splits everytime I watch it, though I havent watched it as often as Veracious seems to have! 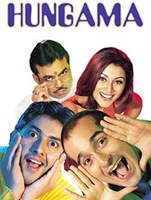 An insane comedy in the best tradition of screwball comedies - this one would do P. G. Wodehouse proud. Two strangers - Nandu (Aftab Shivdasani) and Anjali (Rimi Sen) - arriving in Mumbai to make their fortunes, pretend to be a married couple to rent a cheap apartment. Anjali is mistaken for reclusive millionaire Radheshyam Tiwari's (Paresh Rawal) daughter by the mercenary Jeetu (Akshaye Khanna) who proceeds to woo her. Tiwari's wife (Shoma Anand) suspects him of having an affair with Anjali while Tiwari himself suspects that his wife is sweet on Jeetu. Throw in a few more misunderstandings and co-incidences, several more zany characters and you have a laughathon on your hands!
8. Yahan Wahan (1984) - beguiling bluffs

A lighthearted romantic comedy starring Farooq Shaikh and Surinder Kaur (you've seen her as Saif's Mom in Parineeta). Boy meets girl and the girl sets out to impress him with her wealth by lending him her luxurious apartment. The only problem is that the apartment isnt hers - she's been given the contract to decorate it for the rich absentee owner who just happens to be her new boyfriend! (I saw this one years ago and am still looking for its DVD.)
7. Pasand Apni Apni (1983) - a miss-understanding 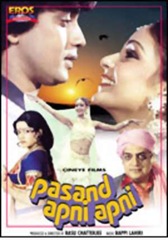 An insane misunderstanding that leads to love. Here, an almost-out-of-work actress - Geeta (Rati Agnihotri) - accepts a ride from the chauffeur of wealthy industrialist Sandeep Anand. She is seen descending from Sandeep's limo and assumed to be his fiancé, all unbeknownst to herself. As a result, wonderful things begin to happen to her - her theatre company makes her the leading lady of all their productions, she is courted and fêted wherever she goes and a journalist (Mithun Chakraborty) becomes her constant shadow. She finds herself falling for him only to find out that he is none other than Sandeep Anand! Directed by Basu Chatterji, this fun comedy also stars Utpal Dutt, Ashok Kumar, Subbiraj, Javed Khan and several of my favorite 80s TV stars.
6. Miss Mary (1957) - mirth and melody

Meena Kumari in a rare comedic role while she was still unaffected by alcohol and melancholia - that alone makes this movie worth watching. But that isnt all. She plays Mary, an out-of-work teacher unsuccessfully looking for a job.

When fellow teacher Arun (Gemini Ganeshan) suggests that they pretend to be married for a job advertised for married couples, she reluctantly agrees. They get the job and land-up having to live as man and wife with a wacko private eye (Kishore Kumar) watching over them while a beautiful student falls for Arun. Throw in some lost-and-found daughters, comic villains and some of 50s best loved songs and you have an entertaining comedy to while away the hours! Check out MemsaabStory's excellent write-up for a comprehensive review.
5. Angoor (1982) - pandemonium personified 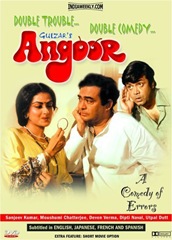 An adaptation of Shakespeare's Comedy Of Errors, the movie involves two sets of identical twins - a pair of Ashoks and their pair of twin servants named Bahadur - with one of each pair separated in childhood. They are brought up in different cities and while one Ashok and his Bahadur are married to Sudha (Moushumi Chatterji) and Prema (Aruna Irani), respectively, the other Ashok-Bahadur pair is unmarried. Chance brings the bachelors to the city of their married twins and utter chaos ensues with nobody (including themselves and their wives) realising that there are two Ashoks and Bahadurs.

In the comedy of errors that ensues, the unmarried Ashok finds himself falling for Sudha's beautiful sister Tanu (Deepti Naval) who thinks he is married to her sister! The resulting situations are hilarious and milked for all their humor by the excellent dialogue and screenplay written by director Gulzar. Caution: a side effects of watching this movie is severe stitch-in-the-side from laughing too much.
4. Naram Garam (1981) - a convoluted story 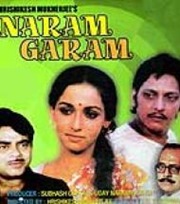 One of director Hrishikesh Mukherji's lesser known comedies, this one is the story of an enterprising young man who manages to please everybody while serving his own ends. Ramprasad (Amol Palekar) is the enterprising young man who houses his lady-love Kusum (Swaroop Sampat) and her father (A. K. Hangal) in an old house owned by his employer Bhavani Shankar (Utpal Dutt). The comedy derives from his attempts to prevent their discovery and ultimate eviction from the property. Ramprasad cleverly exploits the very human weaknesses of his employer and fellow colleagues to bring about his own happily-ever-after. Apart from Amol Palekar and Utpal Dutt's expectedly brilliant performances, the other memorable performance is that of Shatrughan Sinha as Babua - Bhavani Shankar's younger brother who is keen on body-building and avoiding women but promptly forgets these in the light of Kusum's beauty!
3. Chameli Ki Shaadi (1986) - droll diversion

An off-beat comedy by Basu Chatterji starring Anil Kapoor, Amrita Singh and Amjad Khan that takes a humorous look at life and romance in a small-town. Chameli (Amrita Singh) is the grown up daughter of coal-seller Nathilal (Pankaj Kapoor). Her scholarly ambitions make her stick to high school inspite of failing multiple times and her romanic disposition makes her pursue Charandas (Anil Kapoor) an unemployed chela (disciple) of the local pehelwaan (wrestler) Ustaad Mastram (Om Prakash). Charandas succumbs to Chameli's charms and the romance is helped along by Charandas's guru in matters of romance - Advocate Harish (Amjad Khan in a rare comedic role).

Their hilarious romance and its amusingly filmi aftermath is brilliantly utilised to sketch a picture of small-town life. The performance of the principals and the rest of the cast (which also includes several TV and stage actors of the day) is superb and the movie never fails to tickle my funny bone.
2. Chalti Ka Naam Gaadi (1958) - flippant fun

A Marx-brothers-meet-Bollywood-masala type of comedy that has entertained people for half a century. Three brothers Brijmohan, Jagmohan, and Manmohan (real-life brothers Ashok Kumar, Anup Kumar, and Kishore Kumar, respectively) run a garage that does not cater to customers of the female sex. When Renu (Madhubala) turns up at the garage one night to get her car repaired, she triggers a storm in this bastion of masculinity. Manmohan falls for her and flouts elder brother Brijmohan's diktat against women. Apart from facing Brijmohan's misogynism, the young lovers have to battle murderers masquerading as princes, they need to don funny disguises, go on hilarious car-chases and help Manmohan's two elder brothers find love, too. (Check out Filmi Geek's excellent write-up for an in-depth review) An old favorite, this is a fast-paced laugh-riot that never fails to bring on he laughs even after several re-watches!
1. Chupke Chupke (1975) - a jest in time

An all-time favorite, this Hrishikesh Mukherji-directed film is a delicious blend of witty dialogues and insane situations that come together in a wacky comedy (fellow-blogizens Beth and Carla agree!). After a comic whirlwind romance, famous botanist Dr. Parimal Tripathi (Dharmendra) marries botany-fangirl Sulekha (Sharmila Tagore) only to be regaled endlessly with praises of her brother-in-law Raghav (Om Prakash) whom he's never met. To take his rightful position as numero uno in Sulekha's esteem, he decides to play a practical joke on Raghav. He takes up a job as Raghav's driver and manages to *seduce* Raghav's visiting sister-in-law (and his wife) Sulekha.

Enter Sulekha's pretend husband - Parimal's English-teaching friend Sukumar (Amitabh Bachchan) - and poor Raghav's plight is pitiable. Throw in a love interest - Vasudha (Jaya Bhaduri) - for Sukumar and you have all the characters caught in a comical charade with only the viewer completely in the know. The dialogues are especially witty and include a play on English phonetics and Hindi words that still has me in splits after more than a dozen re-watches!
Other comedies that I love but which did not make it to the top 10:
Sur Asur which stars Rohan Kapoor (and others whom I cant remember) and is a great parody of Bollywood masala.
All of Basu Chatterji's comedies, but especially Chhoti Si Baat (1975), Hamari Bahu Alka (1982) , Dillagi (1978) and Kiraydaar (1986).
Hrishikesh Mukherji's satire on married life - Rang Birangi (1983), and the hilarious Golmaal (1979).
Prem Deewaane (1992) - a tongue-in-cheek send up of Bollywood - masala which stars masala-queen Madhuri Dixit along with Jackie Shroff, Puja Bhatt and Vivek Mushran.
Edited Aug 12, 2008
Readers' choice #1:
Jaanne Bhi Do Yaaron (1983) - a black comedy 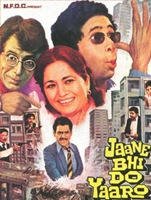 Director Kundan Shah's wonderful satire on the ways of the world in early 80s India is perhaps the only dark comedy in Bollywood. It involves two struggling photographers - Vinod (Nasseeruddin Shah) and Sudhir (Ravi Baswani) - who inadvertently photograph the commission of a murder. They don the hats of private investigators and their investigations lead them into the murky world of Bombay real-estate. Their bumbling attempts to find the murderer and expose the scandals in the real-estate business make for hilarious situations. The movie comes complete with impeccable pedigree - apart from Nasseer and Baswani, the cast includes Om Puri, Pankaj Kapoor, Satish Shah, Satish Kaushik, Neena Gupta and Vidhu Vinod Chopra (according to imdb), plus several other leading theatre and TV actors of the day. Needless to say, the performances are superb! A movie that successfully combines slapstick with biting satire and doesnt fail to bring on the laughs.
Posted by Bollyviewer at August 17, 2008